Are you familiar with the concept of wabi sabi?

The Wikipedia definition of wabi sabi is this:  In traditional Japanese aesthetics, wabi-sabi is a world view centered on the acceptance of transience and imperfection. The aesthetic is sometimes described as one of beauty that is "imperfect, impermanent, and incomplete".

There's a lot more to it than that simple explanation, but that will suffice for an introduction. (I've been studying wabi sabi this year -- it's something I'll be writing about more in the future, I'm sure.)

I'm embracing the wabi sabi with my first little bunny. 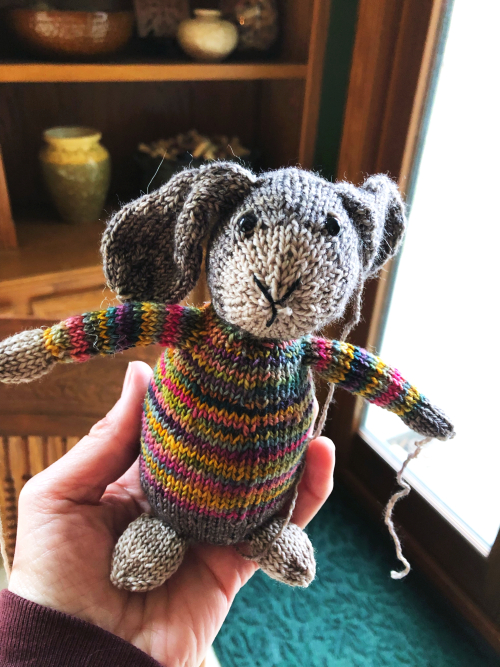 He's adorable.  But flawed.  In a delightfully wabi sabi way.

I am using scrap yarn to knit him, and I ran out of the main bunny color after knitting the first hand.  So one of his hands and both of his feet don't match his body or head.  (You can't tell so much in the photo, but in real life it's quite obvious.)  One of his ears is bigger than the other.  (I miscounted somewhere along the way.)  His head is crooked.  (Picking up stitches for the body is trickier than it looks.)  And he has a loose stitch at the tip of his nose.

But I'm embracing the wabi sabi here.  (And I know the recipient will, too.)
I think it adds to his charm!

How about you?  What are you making this week?