Soundtrack of My Life

In Lieu of Fall Color

I can't really believe I've knit so many sweaters so quickly lately.  Because this is not how I usually operate.  (It helps that they've all been cropped and/or sleeveless and/or knit at a bigger-than-usual gauge.)  (Just sayin.)

I had planned to do the backyard-photo-shoot for this sweater with a backdrop of fall color.  But that just isn't happening here yet (still very green).  So I decided to use a pumpkin as a prop . . . in lieu of fall color. 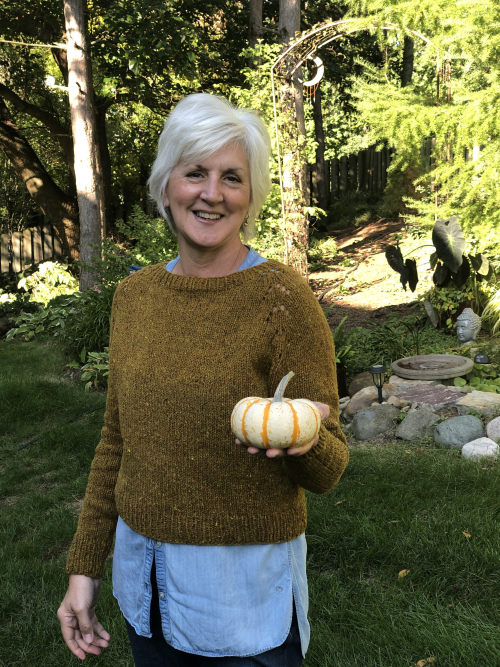 But then I couldn't really figure out what to do with it. 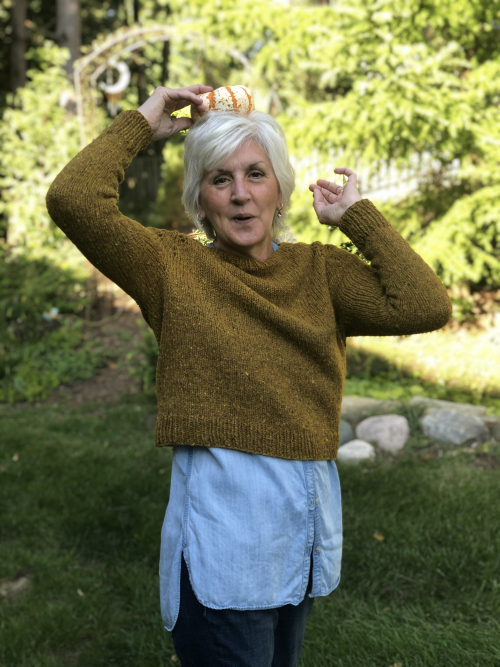 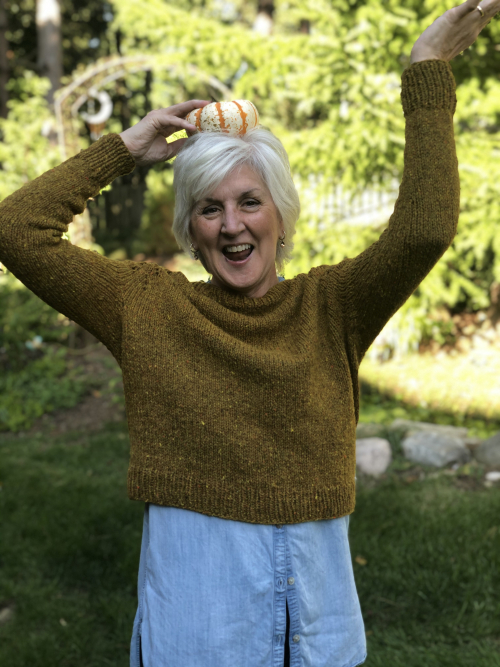 There you have it!

* I linked to Eva Cassidy's version of Field of Gold.  This is one of my all-time favorite songs, and while I love Sting's original version, I find Eva Cassidy's cover to be just lovely.  And so beautifully haunting.  Enjoy.

Last month, I wrote about finding the sweet spot in my knitting.  That place . . . where knitting meets intention.  My attempt at trying to make things that I (or someone I love) will wear.
And keep.
And love.

And I'm here to report that I did it.
(In the words of Alanis Morissette, sometimes . . . you learn.) 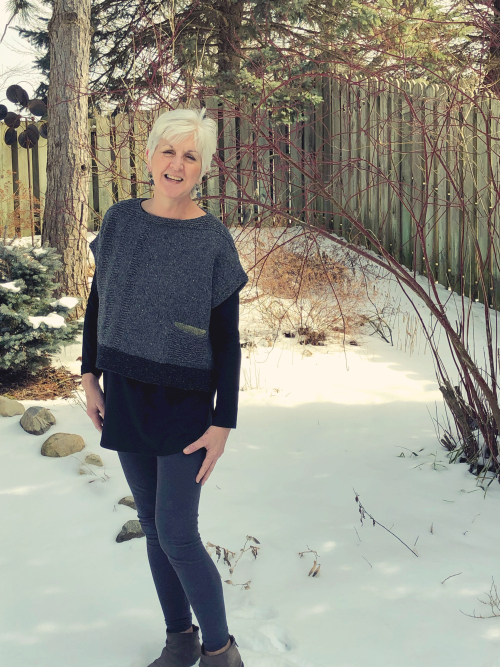 A perfect little layering piece.  It's exactly my style.  In exactly my colors.  And since finishing it last week, I've already worn it 5 times. (In fact, I'm already plotting making another one.) (It's that perfect.)

Definitely in my sweet spot!

(All the Ravelry details here.) 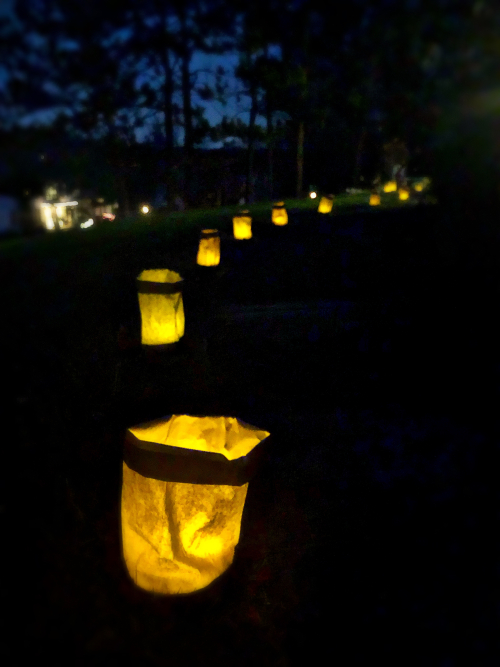 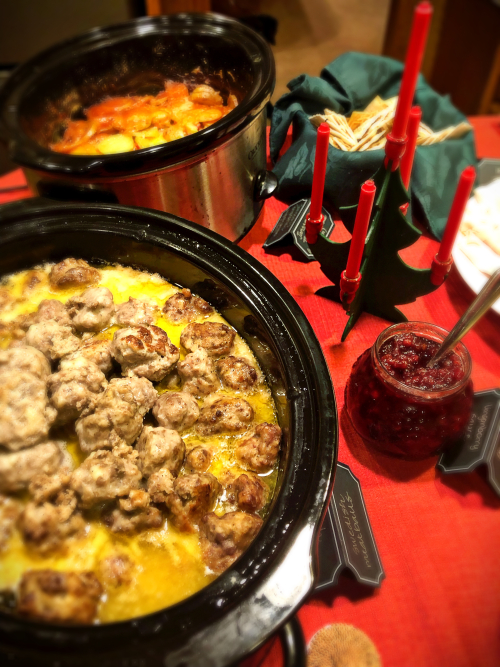 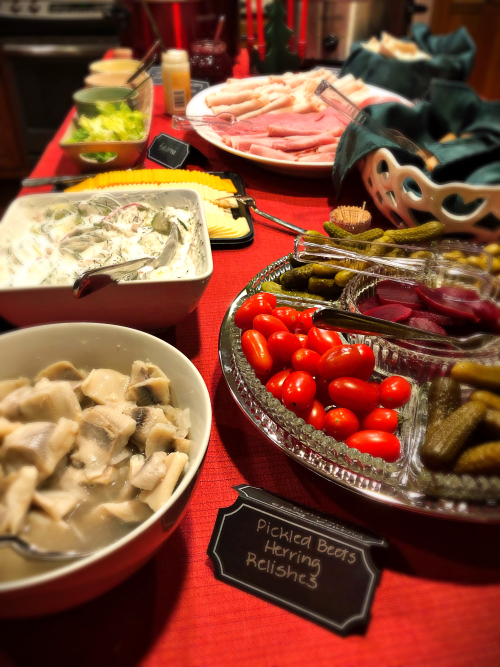 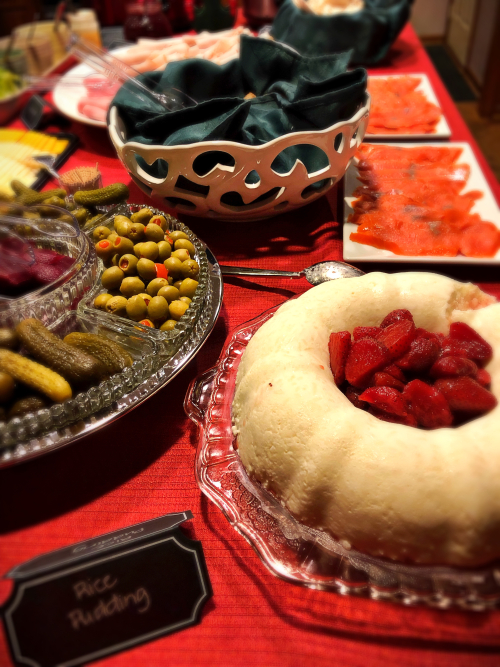 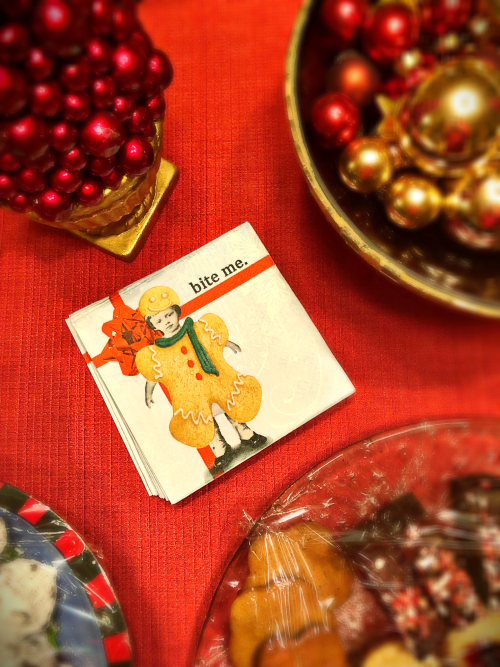 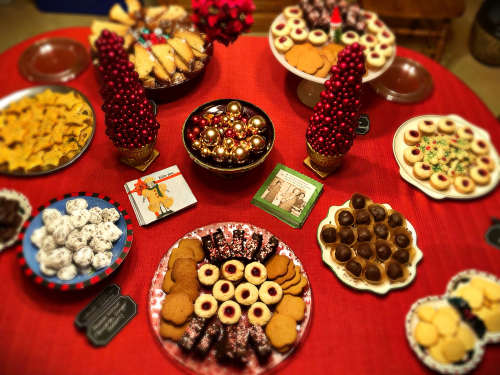 Today, I'm happy to have it all (including the clean-up) behind me.  It's time to just sit back and enjoy the rest of the holiday season. 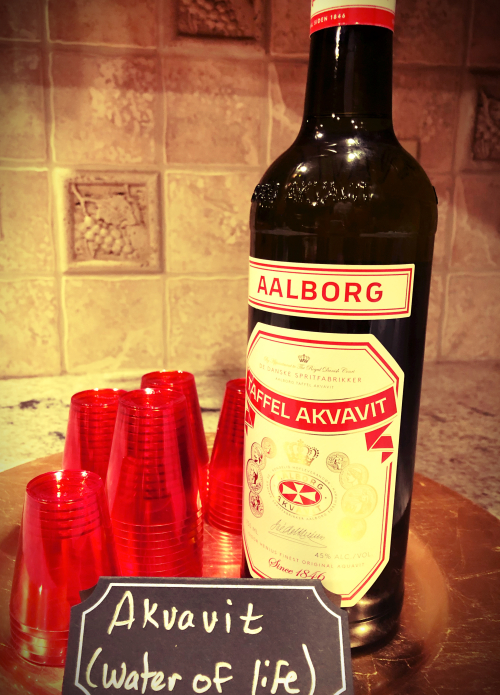 And - by special request - click here for the Songs for Winter Solstice playlist Tom and I created for our annual party.  Remember, you won't find any Christmas songs on this playlist, but you will find an assortment of songs sharing the loose themes of light, dark, stars, the sun (including both the setting and the rising), and seasons.  (There is also one birthday-ish song in there, for obvious reasons).  Listen and enjoy! 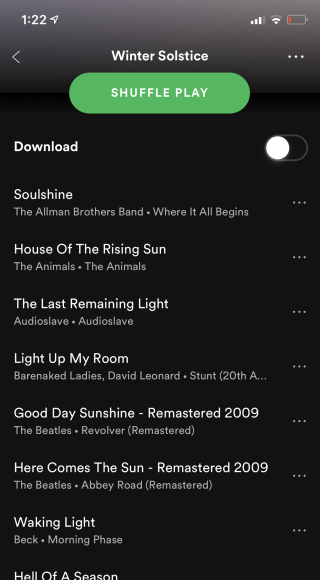 I wish you all a lovely Solstice, and a happy weekend -- full of light!

(Note:  After many annoying minutes of trying to get the actual playlist to embed correctly in this blog post, I have given up.  You have to click the link (in red, above) to get the playlist.  The "list" is just a photo and will not play directly.  Sorry.) 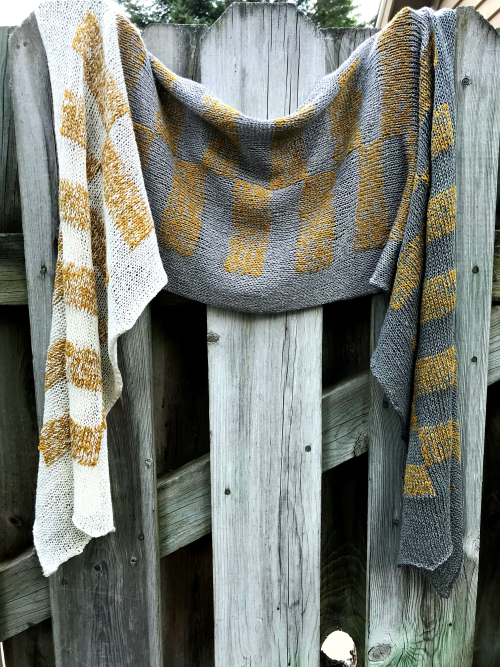 Shades of grey.  Plus white.  And a mustard-y yellow.
Summer.  Linen.
Color blocks.  Grids.
Flowing all together. 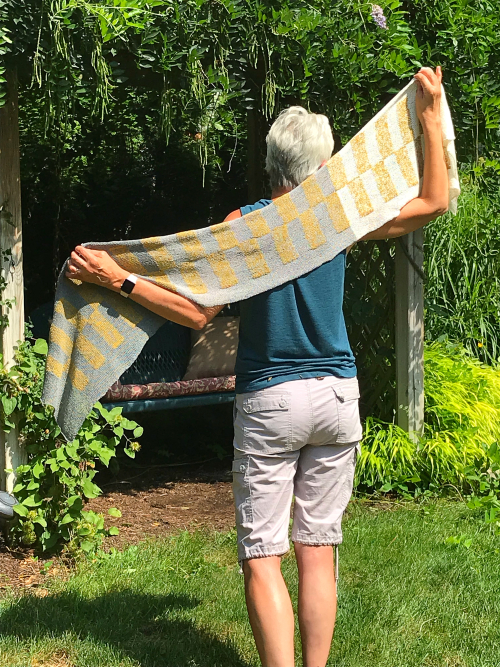 With one breath
With one flow
You will know . . .

Be sure to join other Unravelers over at Kat's today.

"In the face of impossible odds, people who love this country can change it."
--- President Barack Obama 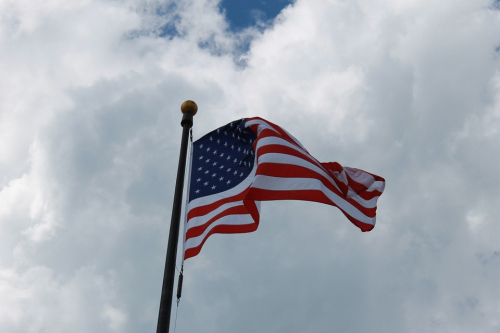 I'm not a fast knitter.

I guess that's not it, exactly.  I just don't finish things quickly.  I am not one of those always-knitting people, y'know?  I like to knit a little every day.  But it's often just that . . . a little.

I don't think I've ever knit anything in just (cue soundtrack) . . . One Week. 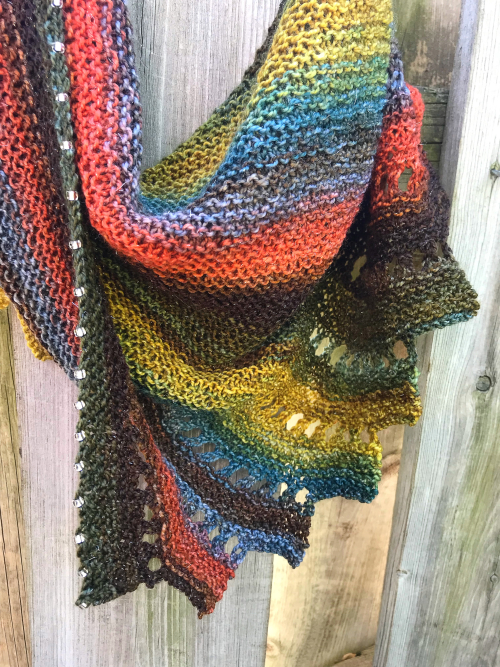 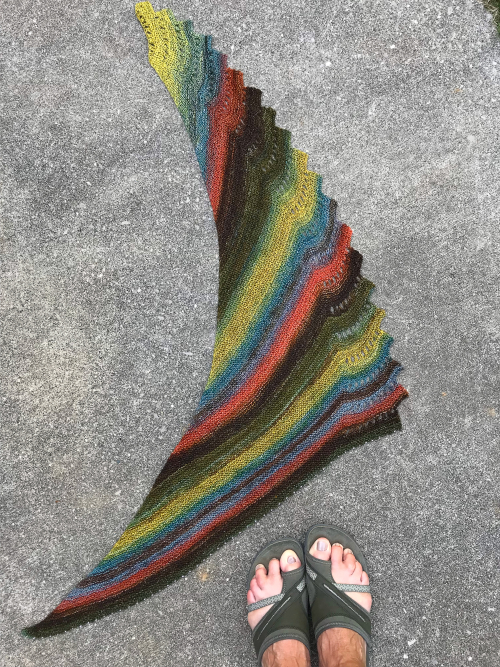 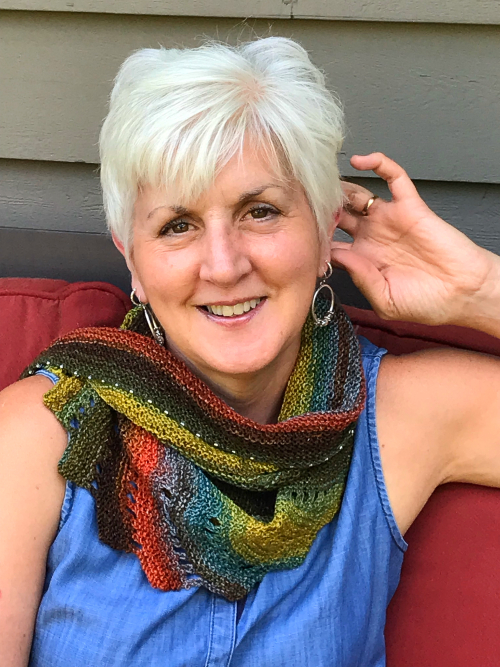 Hop over to Kat's to read other Unraveled posts today.

Plants and Birds and Rocks and Things

(Click here for today's soundtrack -- and a throwback video.)

a shawl with no name 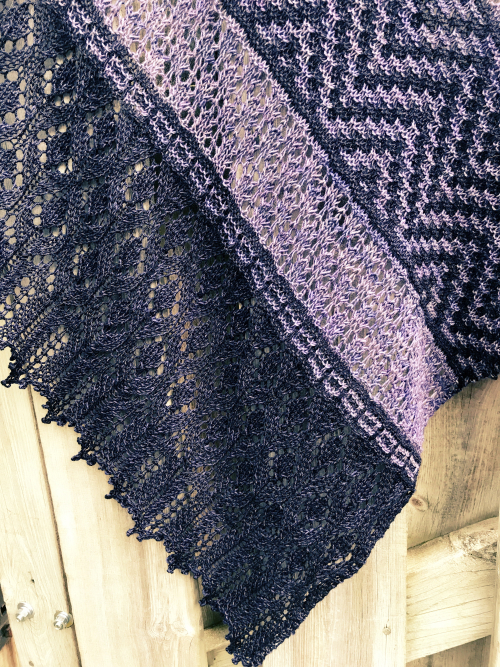 Knitting just hasn't been much of a priority for me this summer. This was the only project I worked on all summer,* finally finishing about a month ago -- and blocking just this week. 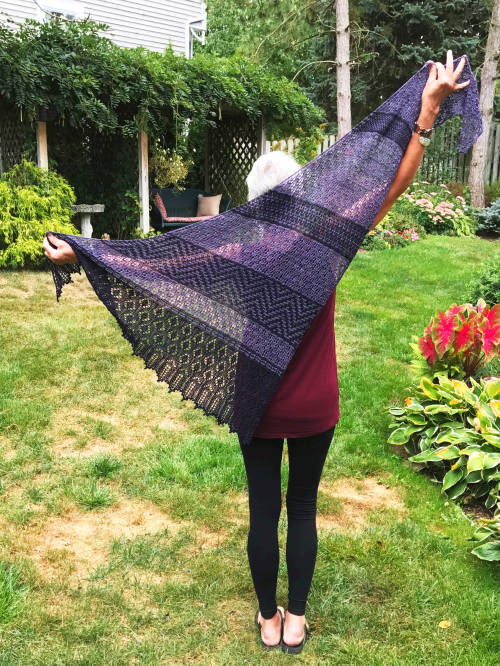 I kind of love it!  And . . . just in time, too.  Because it is suddenly feeling very fall-ish here. 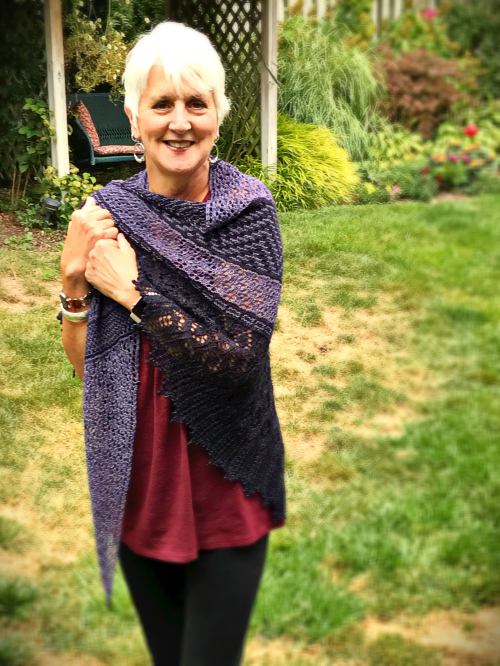 *  Except for that disaster-wedding-shawl.  But we're just going to let that one go.

Glide on the Peace Train

Back in December - eager for peace - I climbed on board the Peace Train (aka Project Peace).  I got a bit waylaid for a while. . . busy with this, that, and another thing.  But, eventually, I got caught up. 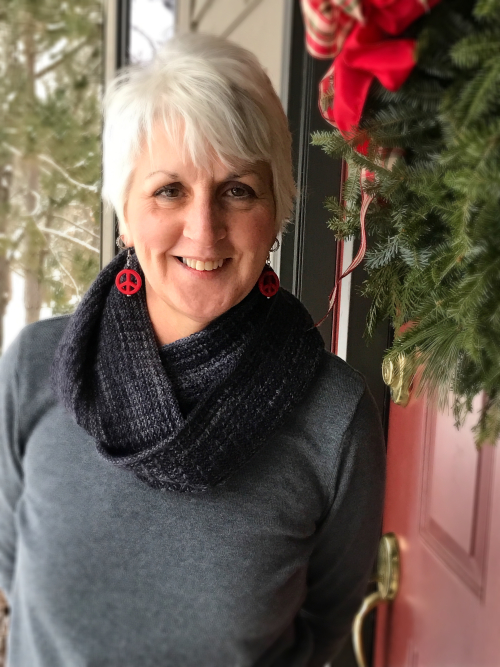 Glide on the peace train!

PS -- Don't forget -- the Month of Letters begins today!  Let me know if you'd like a letter this month and I'll be happy to write to you.

If your house was anything like my house back in 2002, this song was probably blasting from your kids' boomboxes all. the. time.  (Right up there with Pink's Get This Party Started and anything by N'Sync.)

As soon as I read through the cable chart for my latest knitting project, this "golden oldie" from Erin's middle school days popped right into my head! And "borrowing" stitches from the next round.  (Sometimes 2; sometimes just 1.)

See what I mean? 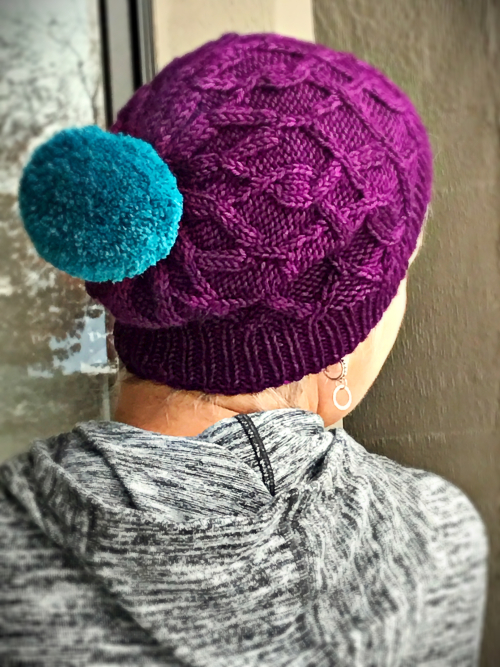 I'm not so sure about the pompom, though.

I knit this hat as part of a quick-and-informal knitalong with Kat and Juliann.  Ravelry details here.

Back in October, I decided to knit a warm and cozy sweatshirt-of-a-sweater.  Kind of an (ahem) instant gratification project.  Simple.  Big needles.  Chunky yarn. 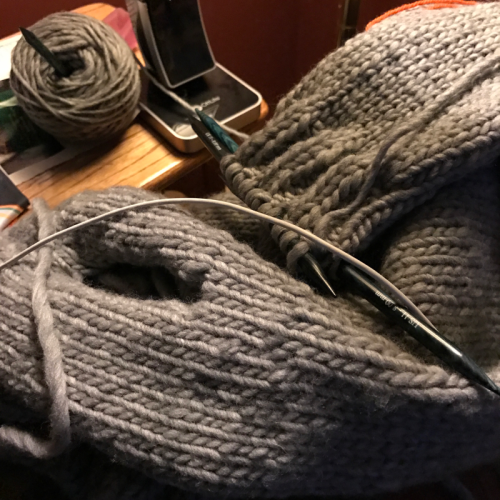 And I cast on during one of the Cubs games . . . on their way to the World Series.  I knit through all the games, and my knitting soundtrack seemed to be David Bowie/Queen's Under Pressure.

I was planning to finish up the bottom ribbing a week later . . . as I watched the election results.  But.  That night I couldn't knit a stitch.  I just sat there.  With my knitting in my lap.

Weeks of angst.  No knitting.  I couldn't bear to pick up any knitting - let alone that particular sweater.  I was dealing with my election grief -- while also hosting my entire family for Thanksgiving and my Mom's memorial service.  My knitting soundtrack switched to grunge . . . insert any Nirvana song here . . . but let's go with Smells Like Teen Spirit.

I started knitting another project - Project Peace, in fact.  Which brought be back to my needles and away from my angst.  After a few rounds of Project Peace, I decided to put it aside temporarily -- and finish up the sweater.

This time, a new knitting soundtrack emerged . . . Foo Fighters Times Like These (here's a nice acoustic version for you). 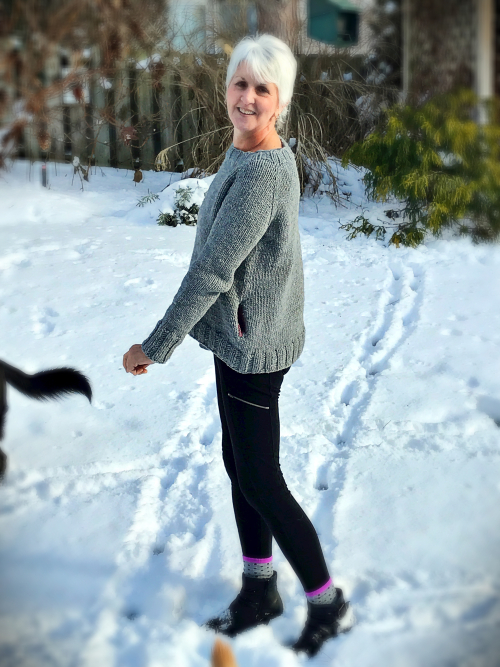 I, I'm a new day rising
I'm a brand new sky
To hang the stars upon tonight
I am a little divided
Do I stay or run away
And leave it all behind? Sometimes you just need to find the right song.