Best Seat In the House

Long, long ago (many, many months ago) (so many months ago), Tom and I decided to reconfigure our library room to make it more comfortable for reading and relaxing; to make it more like a comfy den. We even decided to add a TV to the room, which is a Big Deal because we've long been a one-TV family, and that TV lives down in our basement family room (and sometimes, we go weeks without watching it). So this has been a big deal for us - lots of changes and a lot of thinking/considering went into the process.

We ordered two recliners for our new "den" -- to replace a couch that was never really a good fit for the room. And we asked Brian to design and build a custom TV table for us. (Which is gorgeous, and someday soon, I'll share that in a post. But not today. Because TV = still in box.)

But then . . . we had to wait.
It took such a long time for those chairs to arrive!
So long that I almost forgot about them. . .

Finally, though . . . they are here!
(The furniture store blamed the delay on the pandemic and a surprise foam shortage. I joke that our chairs were stuck in the Suez Canal. Who knows?) 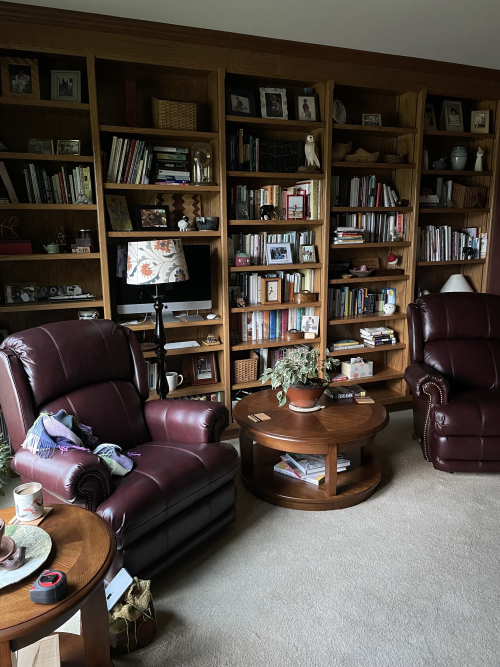 Once the chairs were all moved in and situated, I had Tom choose which one would be "his." Because I really didn't care which would "evolve" to be "mine". (They are the same chair, y'know?) And I knew that "ownership" would "evolve" even if it wasn't clearly defined from the get-go. Anyway, you can tell from the knitting bag . . . and the coffee cup . . . and the wool throw (because air conditioning vent) which chair turned out to be "mine."

I had no idea - until I sat there for a few moments - that "my" chair offers a Big Advantage! From my seat in that particular chair - and without moving at all - I can see my garden to the front (along with a view to the west that offers great sunsets). 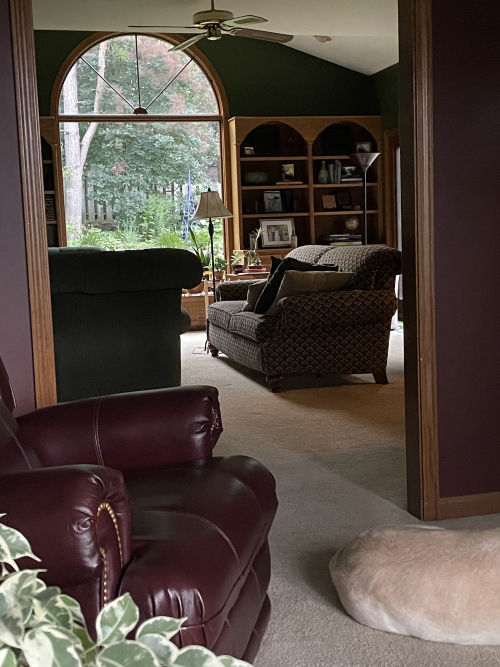 Without a doubt, this is the Best Seat In the House!
(And NO Take-Backsies, Tom!) 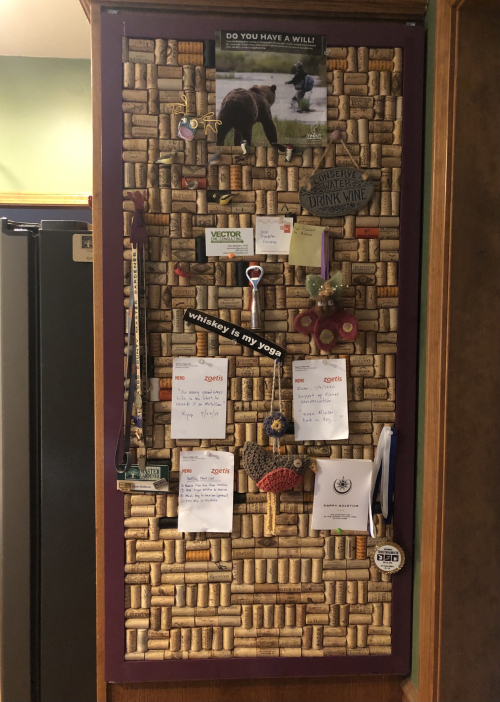 If there is a "theme" in my home organization "system," it is . . . the bulletin board . . . which I apparently embrace as a way to inspire, remind, and capture all the "random" bits and bobs of my life.

I first started thinking about how I utilize the humble bulletin board back in March, when I was writing my Spring Cleaning posts and shared the Clutterbug information about organizing styles. I realized that my Clutterbug-style - a visual, macro organized "butterfly" - would, naturally, gravitate to the bulletin board as a strategy. Of course! I want/I need things right out in front for me . . . where I can see them.

There's the one above, on the side of the "wall" that houses my refrigerator. It is a catch-all for silly things that make us laugh, mostly. And directly across from that bulletin board . . . is another one. 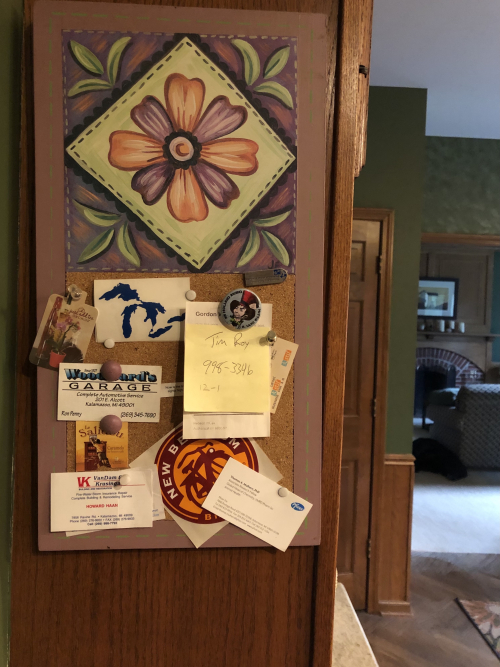 Which appears to be where business cards, "important" phone numbers, and the detritus of our pockets end up.

I have bulletin boards in my laundry room (two of them, actually). They collect random buttons and care instructions and postcards and photos. I have a giant bulletin board in my back hallway for a calendar and schedules and important pieces of mail. My sewing area has two (mostly for useful stuff: needles, swatches, threads, unused pompoms, instruction sheets, conversion information, etc.) 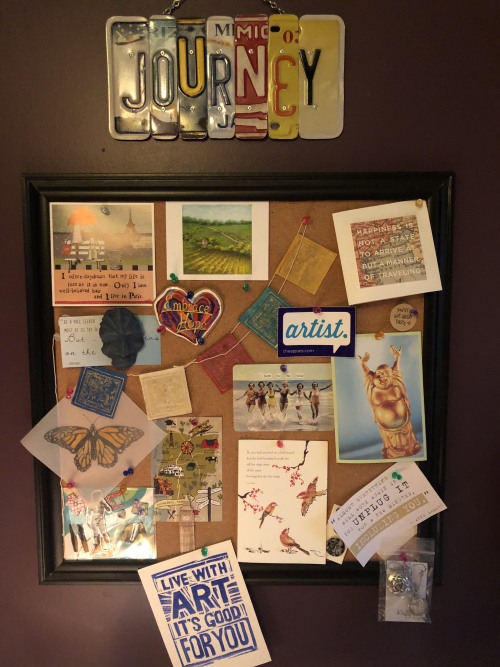 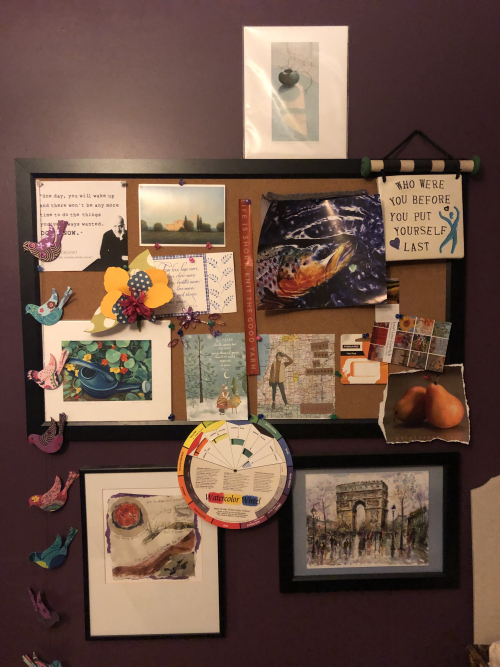 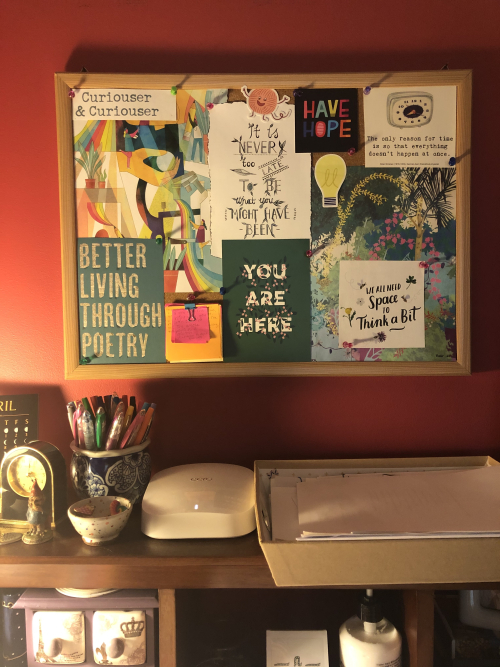 Clearly, I am big on visual inspiration!

Tom (who is also a "butterfly" when it comes to organizing styles) embraces the bulletin-board-as-organization-and-inspiration-tool, as well. Here's the bulletin board over his desk. . . 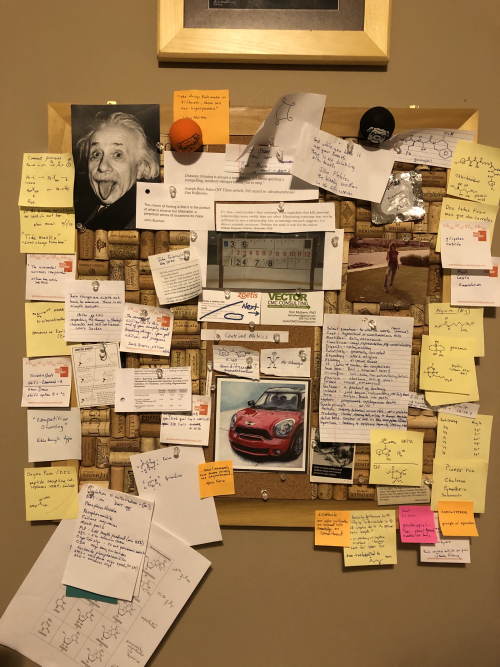 Very neat. Very inspired. Very visual. I love to read all of his notes and quotes (even when I can't make heads or tails out of many of them).

How about you?
Are you a visual person who makes use of the bulletin board for organization and inspiration?
Or does all this make your eyes twitch?

Have a great weekend, everyone. Here's to organization with plenty of inspiration for us all!

I've already talked about this . . . my bathroom renovation project . . . that included removing old (and really stuck-on, I might add) wallpaper.  Well.  The project took awhile!  I got a good start, and then there was spring - and the garden needed a lot of attention.  And then we went on a trip to Wyoming and Colorado.  And then Tom started heading up north every week for some fishing.  (You know.  Life.)  And the project just . . . crawled along.

But that was kinda okay.

Because while I knew what I didn't want the bathroom to look like (Busy), I really had no idea what I DID want it to look like!  So we just kept plugging along.  Removing the wallpaper.  Preparing the walls.  Painting the ceiling.  Telling each other that it would "look great when it was finished."

And then inspiration struck . . . in the form of an inexpensive (bonus!) shower curtain at Bed Bath & Beyond. Once I had that shower curtain, everything fell into place!  I had my color palette.  I could choose a paint color.  A rug.  Towels.

It all came together last weekend, when Tom installed the hardware (new towel bars, etc.).
And I am so pleased! 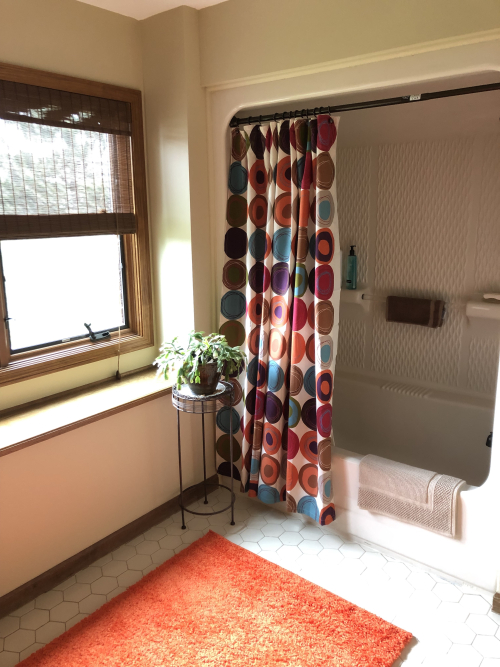 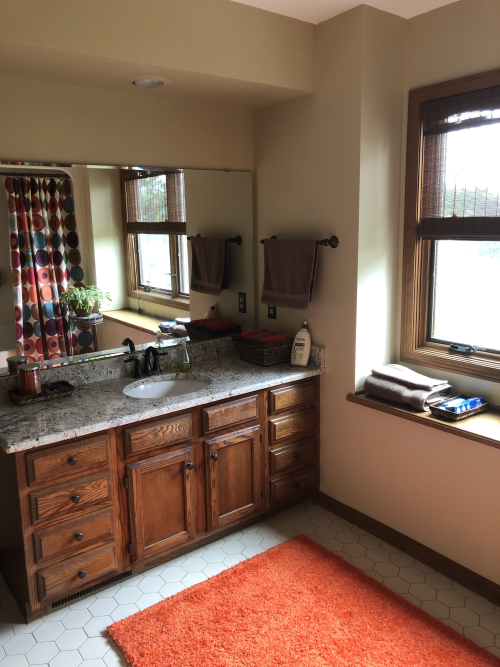 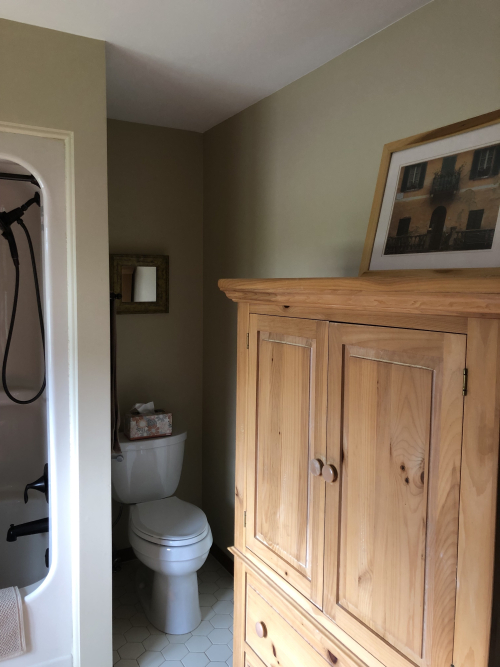 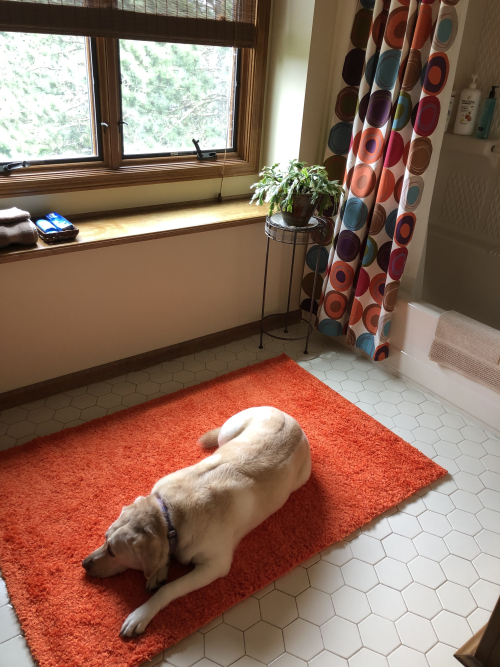 I love the shower curtain, but my favorite thing is the orange rug. . . 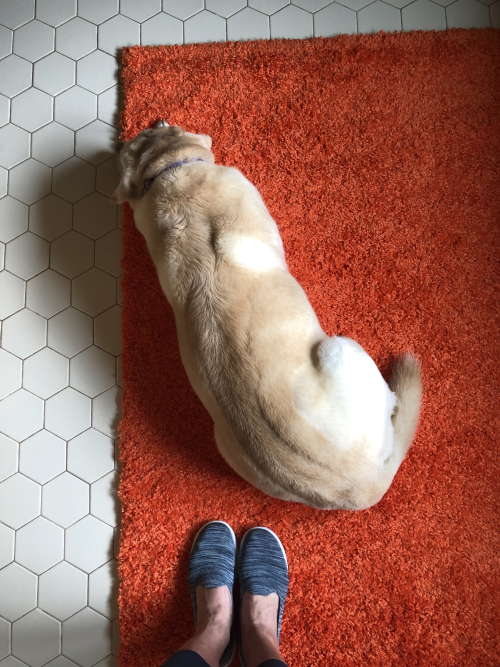 (I never can resist a pop of color.) A Different Kind of Finished Project

But, y'know, the task is just not much fun.  And I had a hard time settling on a color.  And then, well . . . I just could never line up the time to do it.  Not during gardening season.  Or during the Up North months.  And certainly not during the holidays.  Or probably right after, either.  Because recovering. 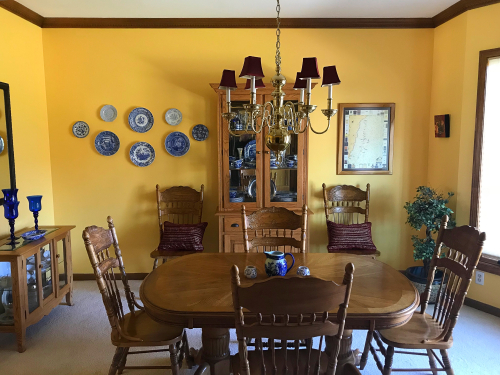 I'm pleased to announce that my dining room re-do is finally finished! 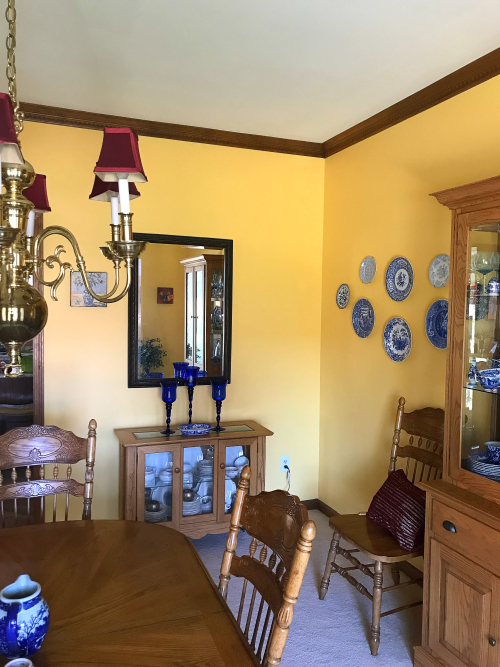 It was truly a family project.  Although Tom and I did all the physical work, everyone else was involved in some way.  Remotely, the kids weighed in on color and design elements, with Brian suggesting we rethink the chair rail altogether.  My dad provided advice and general cheerleading support.  And my sister helped me choose the paint color (thanks to the magic of technology).

I wish we could all gather to celebrate!  (We'll have to do that remotely, too, I'm afraid.) 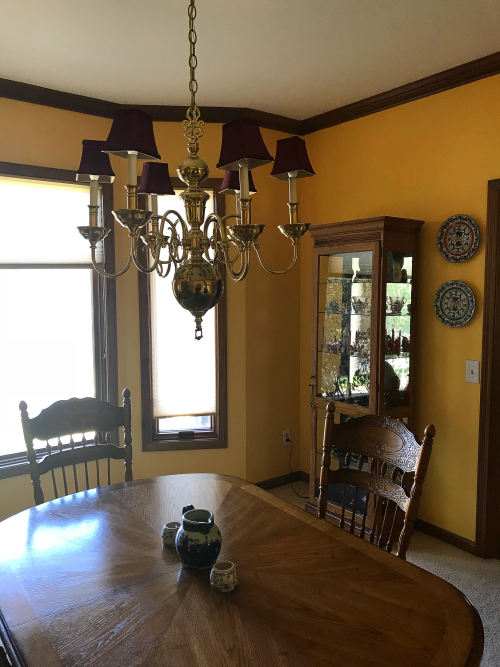 I'm so pleased -- and so happy to finally be able to cross this project off my to-do list.

Just a reminder:  Tomorrow (April 26) is Poem in Your Pocket day.  Share your favorite!

No time for knitting.  No time for stitching.  But plenty of unraveling going on!

When we moved into our house back in 2003, there was late-80s wallpaper in every room.  Heavily patterned.  Lots of mauves and teals.  Everywhere.  I'm sure it was really awesome and trendy back in the day.  But by 2003 it was dated and awful.

It took a while for Tom and I to be able to look past the wallpaper to see the promise of the layout of the house.  And it took a generous "re-decorating" offer from the former owners to sweeten the pot.  Most of the wallpaper was removed (and carpet replaced) before we even moved in.  But there were three rooms that would have to wait until later -- the master bathroom (described here), the main bathroom upstairs, and . . . the dining room.

But removing wallpaper is such a pain in the . . . neck.  And it's so expensive to have it done professionally.  So we put it off.  And off and off and off.

It's time now, though.  To just power through and git'r'dun! 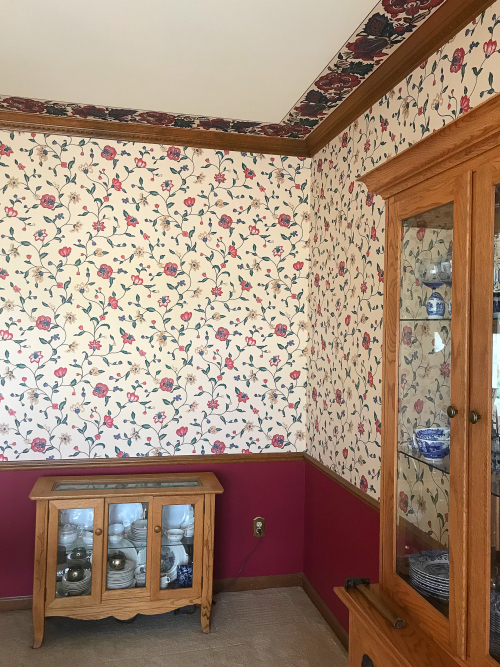 The wall below the chair rail is painted; the wallpaper and the border above some really lovely crown moulding ON THE CEILING need to be removed, though. (Tom also removed the chair rail yesterday.  No more two-tone dining room.)

I found this product online, thanks to a lead from the guys who did our bathroom renovation project a couple of years ago.  (They used a professional grade product that was very much like this one.) 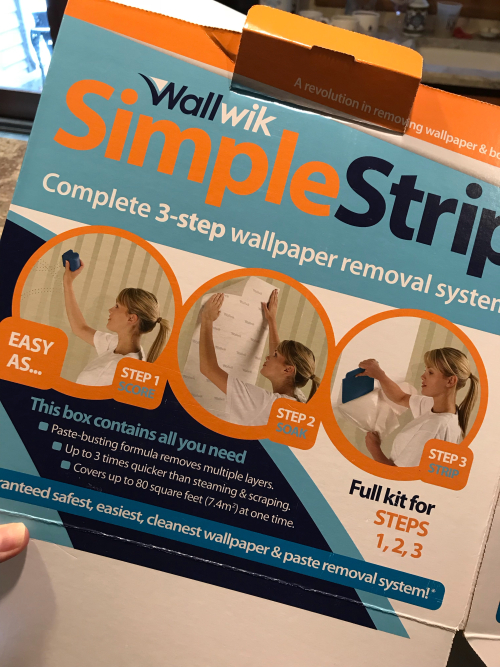 It really does work as promoted.  It's far less drippy than either soaking the wallpaper down with a sprayer, or using a steamer.  (I've used both methods in past houses.)

You just lightly score the wallpaper (lightly, I learned in my first test area . . . so that you don't damage the drywall underneath), then soak the sheets and stick them to the walls for a while (in my case, it takes about 15 minutes per application). 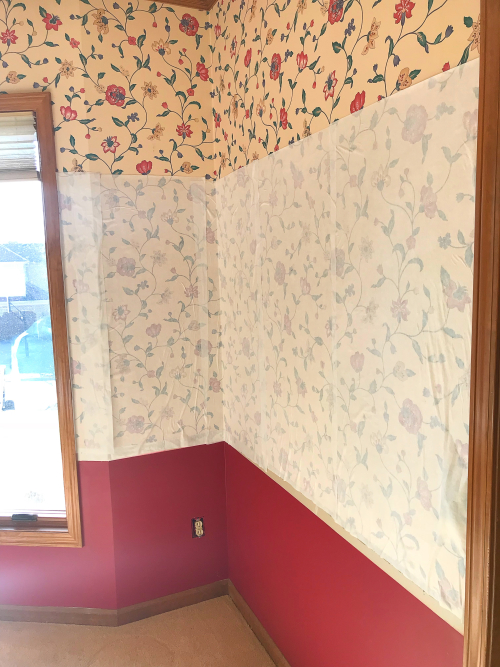 The wallpaper really does peel off pretty easily . . . most of the time.

Don't get me wrong -- this is still a tedious and frustrating job.  It's a lot of up-and-down on the ladder, and a lot of work.  But the results are coming much easier than my past experiences with wallpaper removal. 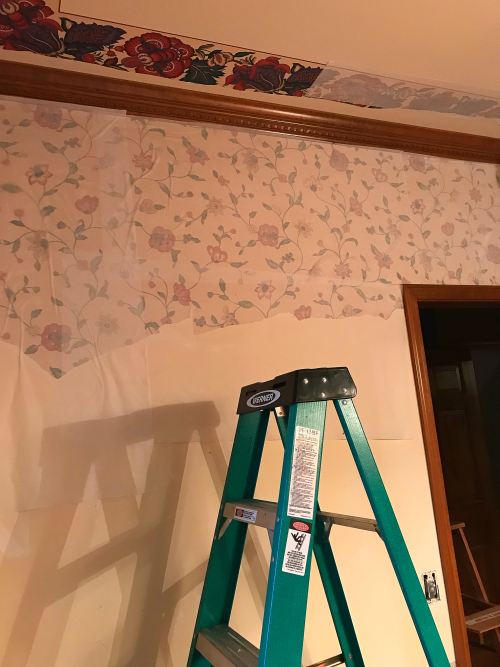 And it is so satisfying to rip that paper off the walls!

Even that ceiling border is coming off with less hassle than I expected.  (Although what a pain to work upside down.)  (So much respect to Michelangelo, y'know?) 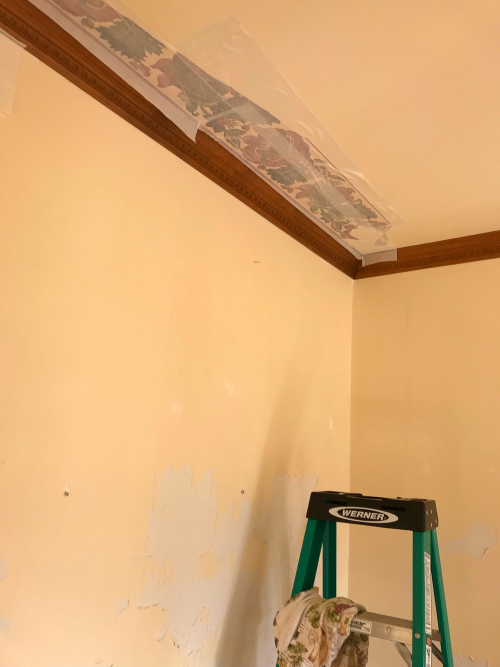 This morning, I'm faced with the last of it. 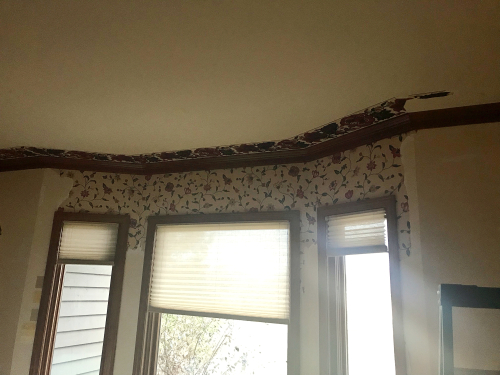 One good session this morning, and the wallpaper will be gone.

How about you?  What are you unraveling this week?