Stepping Away from the Edge
Home Archives Profile Subscribe
Read With Us: Let's Talk About . . . Young Mungo
Tales From the Garden

A few weeks ago, I explained my strategy for summer knitting (digging through my time-out bin filled with a veritable “dysfunctional family” full of projects) and introduced you to The Problem Child. Then last week, you met The Poor Relations.

This week? The Prodigal Son returns! 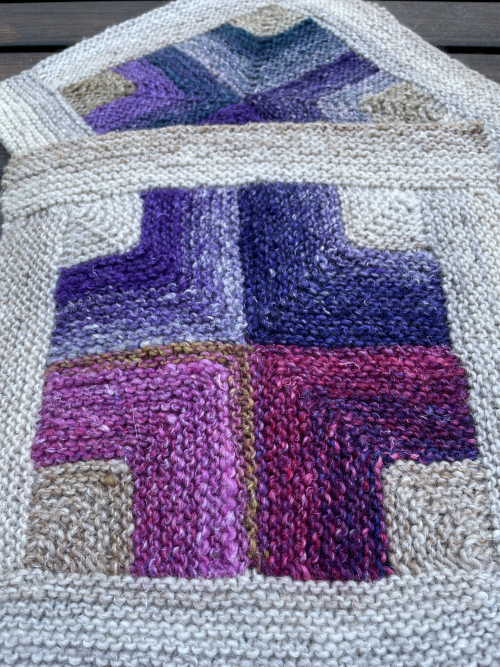 You may be familiar with this Christian parable . . . a father is overjoyed when his long lost son returns home and welcomes him with a feast. (Totally pissing off his other son, by the way - the one who stayed home and did all the work. But that's another story - and maybe another knitting project - altogether. . . )

My own Prodigal Son . . . is this blanket, which I started in 2011. Back then, the pattern had just been released as a fundraiser for Mercy Corps following the tsunami in Japan. I loved the design. I wanted that blanket. And I had a bunch of Noro Silk Garden just sitting in my stash with no plans for anything. So . . . what the heck! I cast on.

It was a nice, easy project. I loved the way the squares looked.

After completing four of the ten squares called for in the pattern, apparently I lost interest or was (more likely) distracted by something shinier. I shoved the whole shebang in a bin and just . . . moved on, forgetting about the project completely. 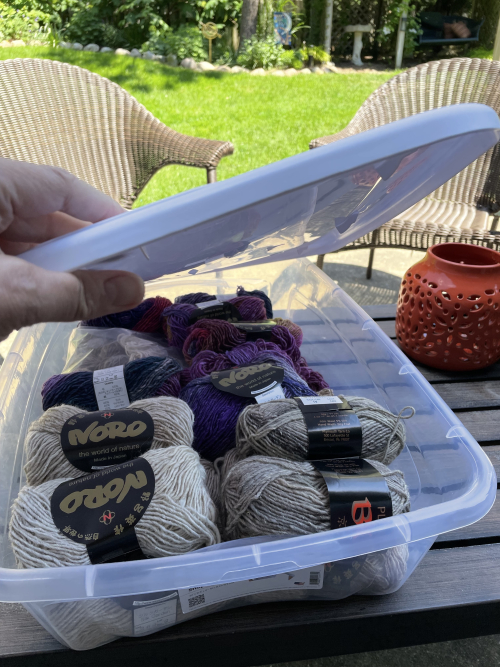 When I opened the bin last month, I was pleased to discover the project neatly put away and ready to finally return . . . home. (The most disappointing thing was that, in my mind, I remembered having knit more squares before sending the project packing. But, nope. Just four.) 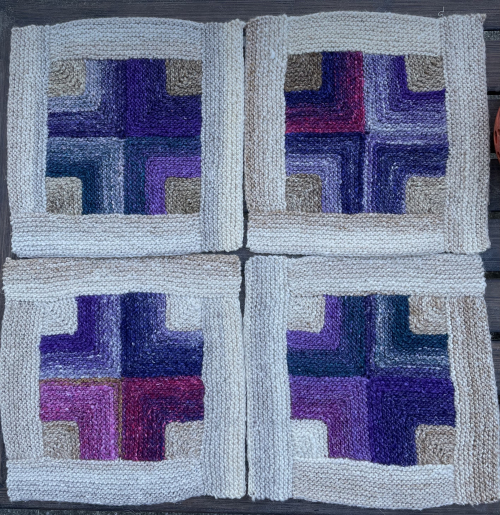 So. The Prodigal Son has returned.
And just in time, too. 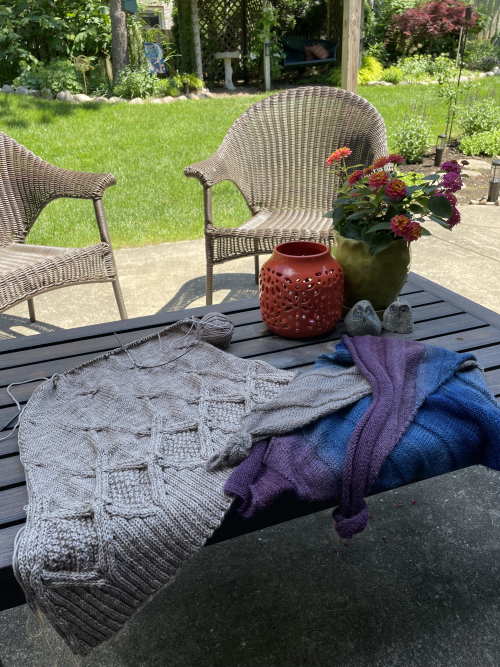 Because The Problem Child has settled down and is nearly all grown up now -- able to watch TV and even sip some wine from time to time. And I decided to just put The Poor Relations out of their misery by casting off and calling it done. (Details another day.)

I just love how you're telling the stories of this dysfunctional family of {lovely} projects! And isn't it something how darn fast 11 years go?? This blanket is gorgeous, even on-screen. Would love to see those colors live, in-person. (When I read your comment about how tidily the project was packed away, I thought 'That was a gift to future Kym...!')

It's nice to have met your dysfunctional family Kym! The blanket is already gorgeous with just 4 squares completed. I bet you can finish that up quickly. Problem Child is looking lovely!! Sorry about the Poor Relations - but that is probably a wise choice rather than shoving it back in a bag for another prolonged period of time!

I'm glad the dysfunctional knitting family has been learning how to function much better! Problem Child is growing up quite nicely and Poor Relations looks like a welcome member of the family now. I hope the Prodigal Son doesn't become too boastful as he grows up because he is really a very handsome project. (And with only six more squares (and some magical seaming and a border) it's almost done!)

I am glad you've decided to revive this project because I love the colors you're using! I suppose if a project has to be in hibernation for a decade plus, it's a good thing it's not a fitted garment.

I also bought the pattern when it was a fundraiser and knit a couple of squares (along with Kat and Bonny) as part of a project for a blanket for someone who was ill, but I don't remember what happened to it. Perhaps one day I'll go back to the pattern, use up some stash, and make one. Or maybe I'll make a couple of squares and then get bored. ;-)

Oh. My. Gosh! I am seriously loving your long lost prodigal son! I have a prodigal child... some years ago I got a wild hare to knit that Pop Blanket from Tin Can Knits. I might have half a dozen circle/squares done... and it is likewise tucked away in a tote. Hmmm, maybe it is the summer of the return of the prodigal child!

I bought that pattern too, though I never cast on. I can see rejoicing in your future when that blanket is finished! I'm looking forward to seeing if something good came of giving the poor relations another chance.

That's a nice project to find especially when so much of it is completed. You'll have it in time for a cozying up for winter reading! Problem Child is turning into a Swan!

Oh I do love that blanket! The colors are amazing!
I cast on for a 'mindless' project yesterday as I had just finished my other mindless project. I think it is the Summer of Shawls.

Beautiful colors! What a joy to find! I'm enjoying this look into your knit revivals. You're inspiring me to do the same! I'll need to find time to go through the put aways.

Now that the baby sweater is packaged to send off (waiting for my kids to be home long enough to receive it) I've swatched, wound and arranged my two circular needles to cast on two Petite Knit's 'No Frills' sweaters, link below. (One is for our daughter and the other for my son's GF) as Christmas gifts. Using Quechua yarn from Berroco that I purchased when our LYS closed last year.

Starting them as two sweaters on two circulars. We'll see how long I can keep that up... :-)

This is such a great series and I'm glad the Prodigal Son has returned to reclaim his glory! Good job on taming the Problem Child and casting off the Poor Relations, too. You've got a great summer of knitting ahead of you.

oh yay! the Prodigal Son is one of my favorites and that project is for sure a perfect match to the story! (also, it's going to be a very cool blanket come colder weather. not that I'm at all tempted. nope. not at all!)

I like Prodigal Son and his beautiful colors! With four squares completed, it won't be too long before you'll have a nice blanket for Fall!

Oh wow. I think the Prodigal Son is my favorite project in this family. What is not to like about Noro yarn? The blues, purples against a gray background are so pretty together. I love blues. Whew! I'm glad you have your summer knitting sorted out.

I think this has to be may favourite of your three projects, I love that you have given the names. I hope by the end of the summer you have three completed projects that you are happy with. I am sure that I have a pair of socks somewhere that have been neglected for a long while, I am not even sure where I have put them!

I remember knitting a couple of those squares as well! Your colors are really nice. You’ve made me feel so. much. better. about the island of lost projects in my closet. A good rainy day may bring a prodigal son of my own home!