After finishing Tom's sweater and then my colorful follow-up shawl, I've been unable to settle on my next knitting project. I mean . . . I did whip up a set of dishcloths, but that was just a palette cleanser; a little placeholder while I decided on my next project. I am being very intentional about NOT getting sucked into knitting one of those charming "nice little summer sweaters" this year . . . as I too often do. (I never wear them. And I don't like working with cotton or linen.) But I also don't want to "get a headstart on fall" by lugging a heavy wool sweater around during the hot months.

What's a knitter to do?

But then I decided to open up my project Time Out Bin instead!

I usually only work on one (sometimes two, but not very often) project at a time. If a project isn't going well, I usually just rip it out and let it go. But every once in a while, and especially if the project has some potential, I stick it away in a bin. (My version of out-of-sight-out-of-mind.) Anyway, I decided to take a peek and remind myself of what's in there. Maybe . . . I could try to work with some of those projects over the summer; y'know . . . see if any of 'em are ready to "behave" yet.

There are currently three projects in my bin: The Problem Child, The Poor Relations, and The Prodigal Son. (Sounds kind of like a dysfunctional family, non?) I'll introduce you to each of them over the next few weeks. And we'll see if they shape up by the end of the summer, shall we? 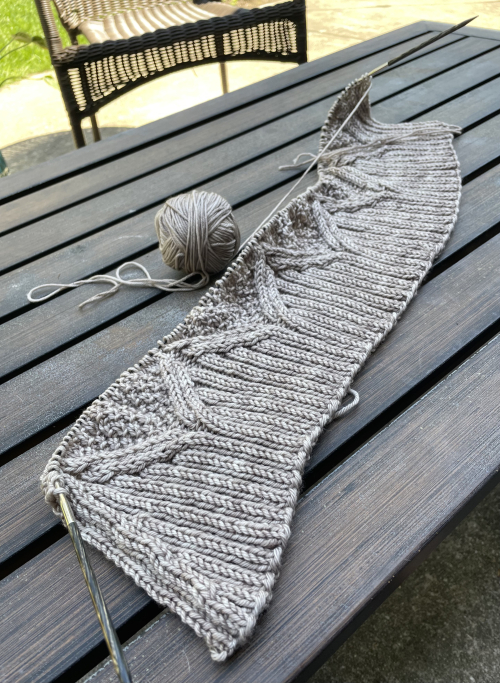 This is the start of a lovely little shawl by Ysolda Teague called Llawenydd. I don't do a lot of cable projects anymore, although I have in the past. I've been considering knitting a cabled Aran sweater, but I haven't settled on a pattern/design I'd like to actually wear. (While I do like the look of some cabled sweaters, I don't seem to like wearing them all that much.) Anyway. When I saw this little shawl (and it is just a small shawl), I thought it might satisfy my "craving" for cables, but not require too big a cabling-commitment. I cast on back in December, right before I made my visit to the Mayo Clinic. I thought it would be a good "traveling project."

I got to the cables and realized . . . NOT a good "traveling project."

In fact, this Problem Child - so called because I have to keep a close and mindful eye on it all the time - requires silence and total concentration. I mean, the chart is clear. The directions are clear. It's all very straightforward for a cable project. But it is . . . double cables filled with moss stitch and a decrease at one edge. (Or, as Ysolda describes it herself, "two by two ribbing flows into a bold, double cable pattern surrounding diamonds of richly textured moss stitch.") Bold, indeed! A knitter must keep her wits about her at all times! No conversation. No TV. No audiobook. No wine. And lots of talking-out-loud-to-one's-self.

I stuck that Problem Child into my Time Out bin as soon as I returned from Mayo, and that's where it has stayed. Until last week when I got it out again. 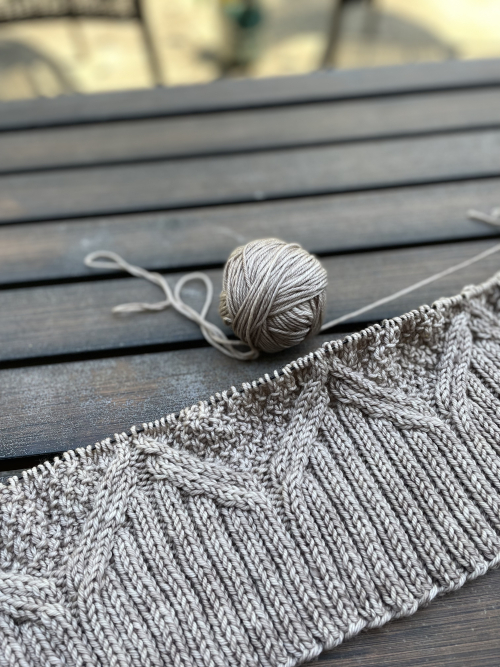 I've reached the half-way point of the main cable motif. The knitting has gotten slightly more intuitive, and I'm making better progress. But, being at the half-way point also means that all the cable-backs and cable-forwards will be reversed now. And, trust me, I know myself well enough to know . . .  I've got to watch this Problem Child like a hawk.

I've also reached this symbol in the chart . . . 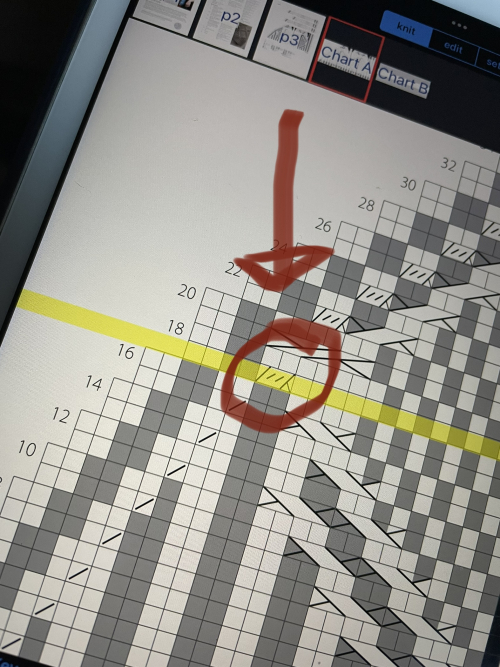 I've lived in fear of this symbol since the beginning. Why? Oh, here's why . . . 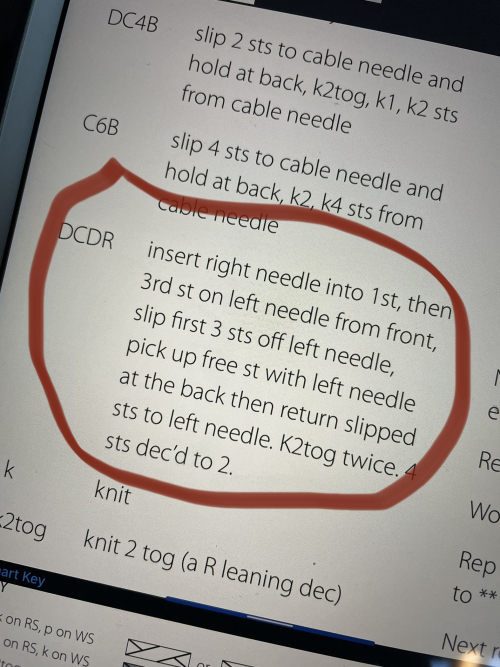 Anyway.
That's what I'm dealing with right now: The Problem Child.
(At least it's wool!)

(Stop by next week and I'll introduce you to The Poor Relations.)

I'm sure that maneuver is easier to do than it is to comprehend without needles and yarn in hand, but still, I can see why this shawl is a problem child! I've got a cabled project on the needles, but all the cables are simple 2x2 crosses, all in the same direction, so while not quite mindless it's a much easier proposition.

Okay... I read the instructions for that big red circled chart marker... and almost had a heart attack! (not like the ummm... feathers, but close) This stitch seems a recipe for disaster and yet, so Ysolda. She does crazy insane things that look amazing once you do them.

It may be The Problem Child but it is lovely! I've read the directions for that dreaded symbol several times and I'm left wondering what this looks like in the end. (I guess you can't just k2tog twice.) Problem Child, indeed, and I'm looking forward to meeting the rest of the inhabitants of the Time Out Bin.

You know they say that the things kids get in trouble for when they are young turn out to be gifts in the end. Looks like that might be happening with this problem child. I am getting my needles cleared off this week because I get to start a test knit project next week - very exciting!

Oh boy! Those directions!!! But I bet it turns out lovely. I love the color yarn and the design really is so pretty...but yikes! I think I would have to shut myself away to work on that with absolutely NO interruptions or distractions. Can't wait to see the finish of your Problem Child!

Your approach to All This made me laugh out loud - what a fun way to think about the Time Out Bin! and kudos for figuring out that crazy double decrease ... it does seem very elegant and very appropriate to the cable motifs. I'm planning to share my Umaro today - the two projects have a lot in common - except that the stitch count on mine remains constant (whew!)

The cables are some of the most beautiful I've seen. The shawl will be totally worth the time! That fiddly stitch would be daunting the first time or two but once you have the hang of it you'll be flying (relatively).

One, the little witches are adorbs and that designer just got $6 from me.
Second, I do like the Problem Child and that cross stitch ends up looking amazing. I like the scarf but I have to say I don't like the ribbing that starts it off. I'm thinking of doing it but maybe shortening the ribbing. Is there any risk in that?

Oh dear. I just discovered this is in my library. (I purchased all her Knitworthy collections: kinda wish she still offered them, and kinda glad she doesn't). I just finished her Marin shawlette and really enjoyed it. My current project is a wool behemoth for the summer months: Emily Cardigan. Thank goodness it is knit in pieces. I don't mind seaming, and almost always regret making a seamless cardigan because they become SO unwieldy.

It's gonna take FAITH! And concentration. At least for the first couple.

I love that seed stitch in the middle of the diamonds. It makes such a nice statement!

Got a mid week request for a couple of baby gifts as my daughter has a couple of friends who are expecting.

They'll be getting these.

Using yarn that I orderd for swatching sweaters that wasn't right. So free yarn, right?

I love your names -- The Problem Child especially. And the directions for *that one stitch* are truly frightening. Hoping that it is easier than it sounds. :-)

Your Problem Child does look very lovely! Good luck with those double decreases!

Great name for a pattern, gotta love a welsh word full of consonants! I love cabling but I guess we all have things we favour in knitting, I don't mind cotton and am intrigued as to folks don't like knitting with it. Your knitting looks wonderful.

Well, for what it's worth, it's a great-looking shawl. And it does look like things calm down after the red-circled bit. I'm working on a Mood cardigan for me, and thinking about replacing a mitten that got lost the second time I wore it LAST winter. It always takes me a while to get back to projects like that -- whatever the regroup is after something discouraging happens. Every once in a while I accidentally make myself sad, when I am looking through one of my baskets for something else and run across that orphaned mitten, barely worn.

That's a very complicated description for a stitch (all I can think is the hokey pokey . . . you stick your right needle in, you pull the left needle out, and you turn yourself around)[your welcome for the ear worm] but hopefully it's logical on execution. I hope the problem child grows up to be a lovely, functioning adult.

That looks like a beautiful outcome - if you decide to finish it. It does look daunting. Maybe if you take it in small bites? Just a few rows per day? Interested to see what you decide, Kym

What a beautiful pattern but oh my goodness. I can see why you call it the Problem Child. I'm sure that stitch is easier to do than read. The first couple of times, I might have someone read the instructions to me while I executed it. Best of luck. I marvel at Ysolda's brain. She is amazing. I can also see why this project wouldn't be great for traveling.