Here we are . . . Friday already! I feel like my week is, well . . . very messed up. It feels like maybe Wednesday to me? It's because I spent all day Tuesday working an election, and 15-hour work days (even when slow) (especially when slow?) wreak havoc with my schedule, my energy levels, and my sense of time. 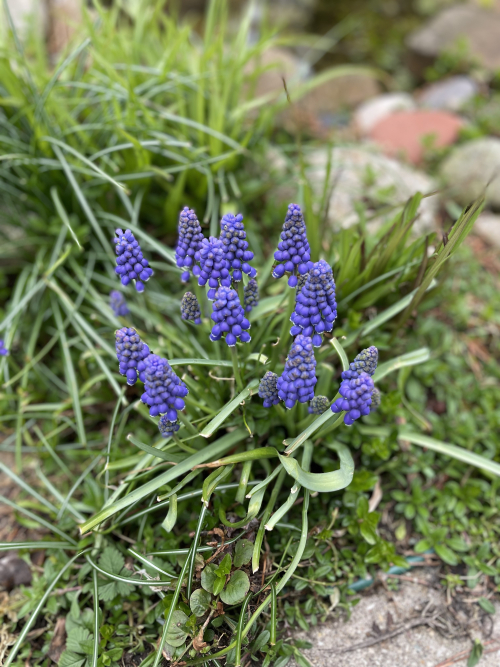 Grape hyacinths are my very favorite spring bulb . . . and I have them springing up all over my gardens right now. It delights me to see them. Flower are always magical . . . but these little guys are especially magical to me!

And . . . speaking of the election. In my post on Tuesday, I provided some basic facts about my community, and asked you to take a guess at how many people would vote in my precinct on Tuesday. One thing I forgot to mention in my post is that we have "on demand absentee voting" now in Michigan, giving every voter the option to vote by mail. And . . . a LOT of people really like that option! So in my assigned polling place (which also happens to include the precinct I live and vote in), we had the following results:

So. I am happy to announce TWO winners for my little guessing game! (I'm choosing two winners because I forgot to mention the ability for voters in Michigan to vote by mail. I was specifically looking for a guess at how many voters would come to the polls, but your guesses may have been lower had you known there was another option for voting. My bad.) Anyway. The winners!!!

(I'll be contacting you both to make arrangements for getting your exciting prizes out in the mail.)

Thanks so much for playing along with me on Tuesday! It was fun distraction for me all day to watch your guesses come in . . . as I read and knit dish cloths. (More on that another day, but I'll tell you that gave me time to finish one book and knit two ball band dishcloths.)

I hope you all have a lovely weekend, full of what you like best.

Well! I was certainly off in my guess - lol. I thought of absentee ballots AFTER I posted my response. Fletch and I have been doing absentee ballots ever since the pandemic started, and in fact just turned in our absentee ballots for our primary election coming up. I'm glad you had things to keep you occupied. Have a wonderful weekend and Happy Mother's Day!

I love grape hyacinth, too, especially when they pop up in front of my daffodils. They make me think of fairy gardens. I hope your week feels on schedule really soon!

And these numbers are exactly why I am seriously considering helping "get out the vote" this fall. It is kind of sad... I have never not voted (as in, if only the dog catcher was on the ballot I'd vote) It disappoints me that no everyone thinks that way. (If more people voted, I don't think we'd be in the mess we are in)

Congrats to those awesome guessers! :) Have a great weekend and Happy Mother's Day to you!

It's nice to see your grape hyacinths, especially because mine are nearly done. Great guesses, Dee and Jane! I've already voted by mail but our actual primary isn't until June, so it will be interesting to see our turnout. I'm sorry it was so slow, but you did get to make good use of your time!

While I am very happy to have won something, I'm sorry that my low number was the winner. At least you were able to keep your mind occupied with reading and knitting.

15 hours?! Talk about havoc! (That kind of workday would be SO much easier if it was busy!)

I hope that on the day after the election you were able to sleep in AND take a nap -- that is one long day! Thank you for helping our sad little democracy, such as it is, plod along. Can't wait to see the dishcloths and hear about the book!

Props to you for working the polls! Polling days are so long! Smith worked the polls until our state sent mail-in ballots and many polling sites were closed. Our percentages are much like yours and since the mail-in ballots are counted ahead of time we have know quite quickly who the winners are.

Lovely grape hyacinths. Ha! I rarely make accurate - wild guesses. Must have been a good day for a wild guess.