Stepping Away from the Edge
Home Archives Profile Subscribe
Read With Us: Young Mungo
Blasting You With Poetry: 2022, Week 3

Bringing You Up To Speed

Although it might not seem like I am . . .
(because I haven't mentioned knitting since finishing the big brown blob) . . .
I am knitting.

I just haven't been talking about my knitting.

It's time to bring you up to speed!
I'm knitting this shawl in this yarn . . . 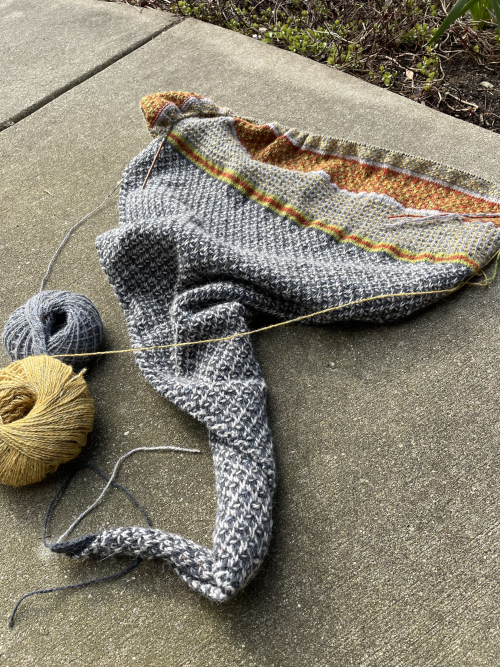 And things are moving right along.
It's been a pretty fun knit so far, including all my most favorite things about knitting:
Color!
Texture!
Wool!

And after getting through that first, rather l-o-n-g slip stitch section (which, I'll admit, did get to be a bit of a slog), I've really had fun mixing the sections up, "sampler" style.

Until I hit the last of the slip stitch sections . . . and discovered that it's really linen stitch (which is, technically, a slip stitch pattern). While I really love slip stitch patterns, I am (gulp) . . . not a fan of linen stitch. It's so (deceivingly) simple. But it kicks my butt every time. (PAY ATTENTION, Kym. I tell myself. Just pay attention to what you're doing. It's an easy, every-other-stitch pattern, on repeat. And yet. . . kicks. my. butt!) So things came to a real slow-down over the weekend when I realized I had a linen stitch situation on my hands! 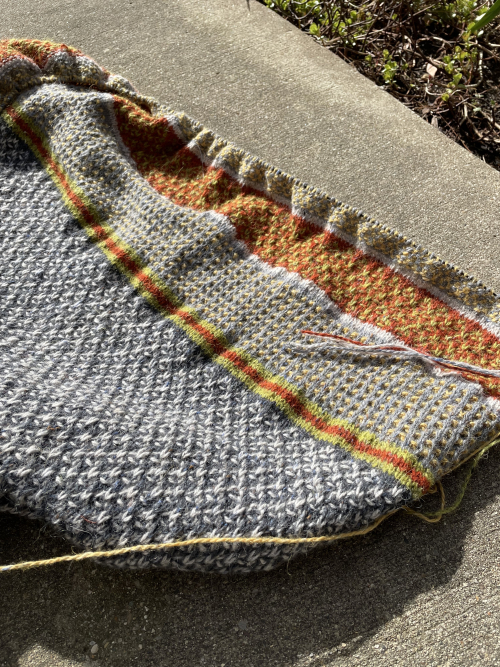 (There was a rip-back of several rows. Sigh.) I'm in the groove again, though. Ever closer to the finish line.

How about YOU? What are you making these days?

Ooh! I like the colors you chose and you showed that linen stitch who's the boss! This might be the perfect thing to wear when it's jus ta little chilly in spring (you know, when it finally stops snowing).

I find the so-called easiest stitches are the ones I mess up the most, probably because I assume I don't need to pay attention and I really do!

I'm working pretty much monogamously on my handspun Hitchhiker and it's just delighting me.

Yes, me too! There are some rhythms that just don’t work for me, linen stitch being one! Also ribbing is easy, but seed stitch - also just knit and purl - is not. My mind just doesn’t want to keep track. But seed stitch is so beautiful So I slog my way through it. Like you are doing with your linen stitch shawl - which is just beautiful! Keep going! Chloe

I love the colors in your shawl. I set mine aside to focus on a few other projects but I’m looking forward to getting mine done and now I will be reading up on the linen stitch to prepare myself.

I love your colors! Am hoping to get wool similar to the sample, but who knows. The folks at Black Mountain Yarn Store may sway me in a different direction...

Oh, well, then. I can see how easy it is to get off track.

I have this shawl in my queue, and am really looking forward to making it. I think I'll get to it after I finish the Christmas sweaters that are in the planning/swatching stage right now.

Have put my Affiknity based hat away for the time being. I need more brain power than I can seem to muster these days to figure out the best place to put the decreases. Hat is basically done, sans the crown.

After finishing my first Musselburgh hat (another one will be cast on soon, in the Solar System colorway; I think I may go up a size for this one), I am continuing the ubiquitous Graham hat production (my son-in-law actually contacted me for a replacment after losing the one he'd received) that never quits around here. It's a broken rib pattern that is worn wrong side out. Luckily for me, I knit combined continental so my purls are backwards, and I get clued in when it's time to change back to a plain knit round.

Happy Wednesday! (And thank you for enduring the deep cold that allowed the temps to drop all the way in to the '40s down here in Gainesville.)

That's a very YOU shawl and I'm glad you've found your groove again! I'm flying along on a Musselburgh hat - simple knitting is key these days because of you-know-who!

I simply adore linen stitch, as well as half linen stitch, and if there was a quarter linen stitch I'd probably love that too! I have this shawl pattern in my library so may have to start on it one of these days!

What a lovely pattern, I too have a love hate relationship with linen stitch. It looks lovely but is nightmare to knit and I always make a mistake which means I undo as much as I am knitting. Enjoy your knitting.

oh YAY for color and texture and for mixing things up! amazingly, that last SS section did not cause me trouble and I breezed through the ribbing. Now it's been sitting for a few weeks waiting to be bound off. It was the last thing I knitted with Holly by my side and I'm just not ready to be done with it.

What a pretty shawl. I'm not a big fan of knitting linen stitch but just think how lovely it will be to wrap that shawl around your shoulders. I'm also working on a shawl.

Love the colors Kym! You will rock that shawl!

I love your shawl colors! (and YAY for wool!)