Stepping Away from the Edge
Home Archives Profile Subscribe
Read With Us: Let's Talk About It
A Little Perspective

An Entirely Different Kind of Making

For Christmas, Brian and Lauren gave me a soup cookbook from Zingerman's Deli and Bakehouse (a Michigan treasure; be sure to check it out if you're ever in Ann Arbor). Each soup recipe includes a suggested "bread pairing" -- which is great if you happen to have quick, local access to Zingerman's bread (I do, but selection is very limited). Without access, those pairings are just wishful thinking . . . (And that link up there? That's to Zingerman's online store. Trust me . . . their shipped goods are almost as fabulous as what you'll find fresh in their Ann Arbor bakehouse. If you have a hankerin' for some FINE bread or bakery goods, give 'em a try.)

Anyway, last weekend, with Tom in Detroit, I decided to try another Zingerman's soup recipe (I'd already tried one - with great results - right after Christmas) . . . AND I decided I'd up my game by also baking the suggested bread for my given soup: focaccia. Now, I'm not exactly a newbie bread baker. I used to bake bread on the regular -- years before the pandemic sourdough craze hit. But . . . I'd never baked focaccia before. No worries, though! I dusted off my trusty bread book and found a recipe for focaccia.

It was a bit fussier than I anticipated.

My recipe began with biga (Italian bread starter; kinda like sourdough starter), so that was my first step. My biga started out looking a bit sad . . . but it perked up and did just what it was supposed to do by the time I needed it, 12 hours later. 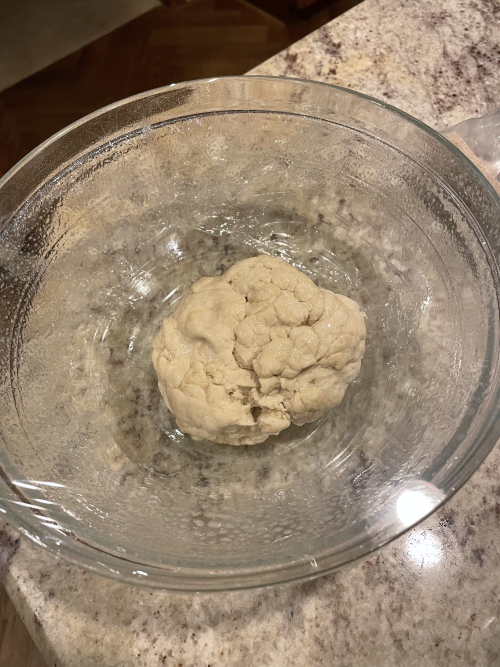 The next day, focaccia baking began in earnest. Let me tell you, focaccia dough is . . . sticky. It doesn't really behave like most bread doughs I've worked with in the past. But it was doing just what my recipe told me it should be doing, so I proceeded, fully bought in by this point. 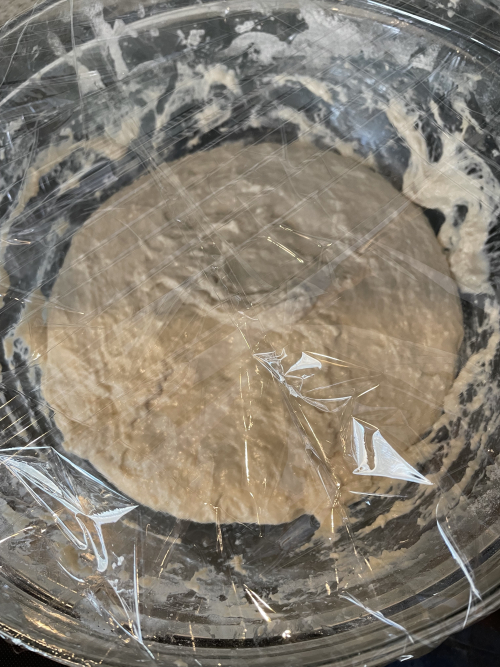 I really like my bread cookbook (it's this one in case you're interested), but I'll tell you . . . more photos would have been really helpful as I struggled to "fold" my very sticky bread dough into thirds, then halves, then again with a quarter turn. I had to trust my instincts and read carefully. And, eventually, I had 3 focaccia loaves rolling right along. 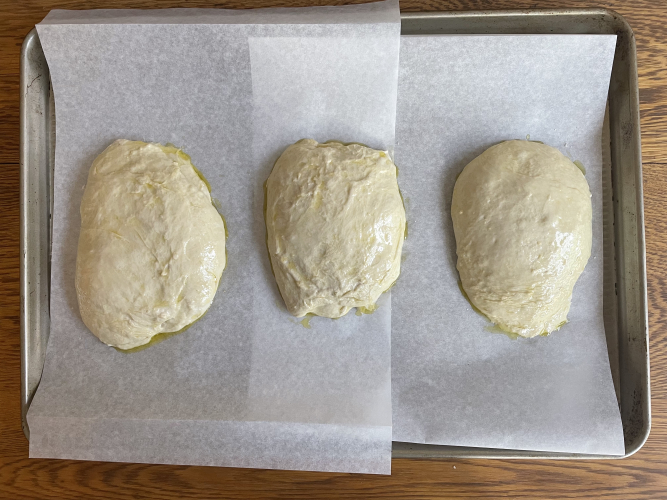 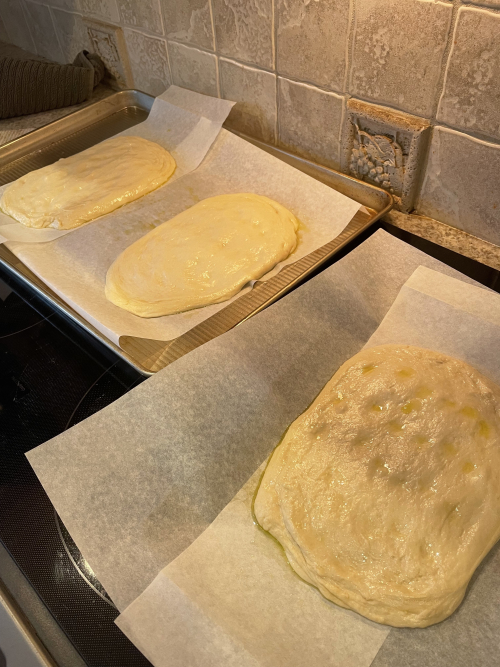 I'm sure Paul Hollywood would have much to say about the air bubbles I managed to bake in (I'm sure that's the result of my questionable "folding" skills, see above), but it really did turn out to be very tasty! 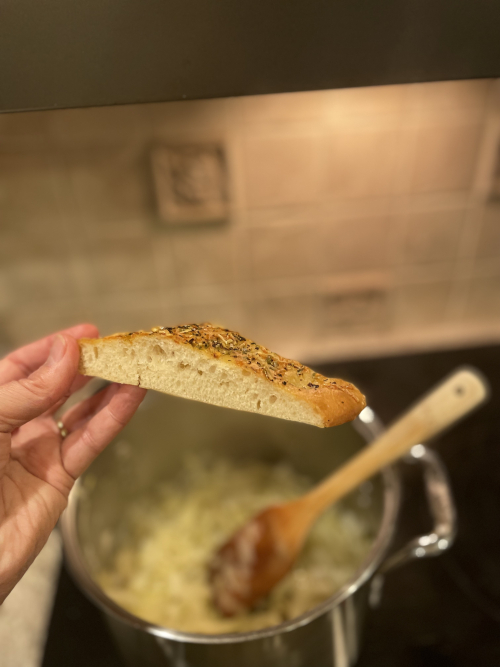 And it was a perfect pairing with the soup, too! (I'm thinking . . . not bad for a first attempt.)

And in the meantime, my knitting jag continues . . . 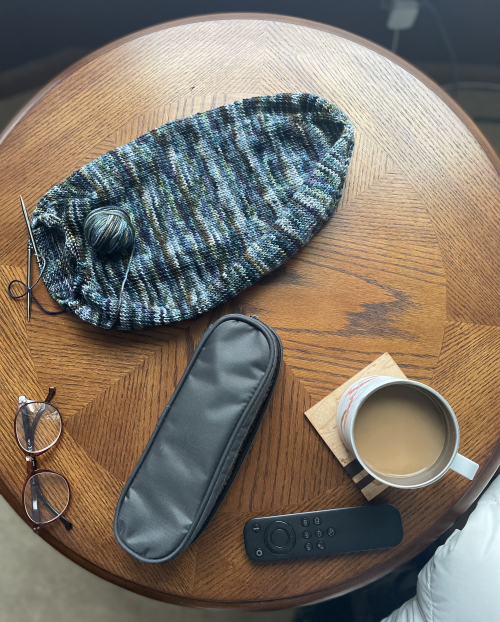 How about YOU? Are you make anything interesting this week?

Well now I want to make soup and bread (still chilly here). but I promised to cook a ham today with scalloped potatoes...so maybe split pea soup over the weekend and bread to go with that! I'm knitting away (albeit slowly) on Holiday Sock #2.

I think you'd have gotten a Hollywood Handshake from those lovely focaccia! (and I just LOVE Zingermans!)

Your hat is just flying along! :)

Small world-soup and foccacia here x2 over the last few days-vegetable soup once and ham and pea.

I use this focaccia recipe that from bowl to table under 3 hours and I split it into two smaller loaves:
https://www.kingarthurbaking.com/recipes/blitz-bread-no-fuss-focaccia-recipe

I'm making hats, but after reading your post I am going to be making soup and bread this weekend! Your focaccia looks delicious to me, and I would enjoy some no matter what Paul had to say. I have the King Arthur bread book and will be choosing something delicious to bake this weekend (when we are supposed to get 10" of snow).

Perfect week for homemade soup & bread in Michigan! What soup did you make?

Your focaccia looks yummy! I would give you a handshake just for dealing with the sticky dough. My bread making is limited to one tried and true recipe from a workshop I took years ago. But I love making soup! In fact I’ll be making a butternut kale and quinoa stew tomorrow! What soup did you make?

Oh Zingermans! I used to buy Christmas cookies from them until I started making my own.
I make foccacia a lot (it's the one bread I can make!) and I have never heard of a biga. I use the Bon Appetit recipe (https://www.bonappetit.com/recipe/easy-no-knead-focaccia) and put it in the fridge overnight and it is just terrific! Air bubbles are good, right?

I've made focaccia from my sourdough started and that's pretty simple, this looks rather complicated. But you can't go wrong with soup and bread! I'm knitting socks and I'm ready to start another Musselburgh hat once Dale chooses the yarn.

Your focaccia looks good! I think soup and bread will be on my menu for the end of the week!
I've ordered from Zabars, but never from Zingermans, but I will check them out!

Paul Hollywood. LOL. He might laugh at your bread holes, but I'd bet on him taking a second piece, and then a third!

We (the little ones and I) made pizza dough last Wednesday. It sat in the fridge until Monday and we made it into foccacia-like bread for Monday's dinner.

Have started a hat based on my normal 96 stitch "Graham" hat
( https://www.ravelry.com/patterns/library/graham-2 --- Ravelry link )
but have modified it to try using the Grab Stitch that was featured on Modern Daily Knitting last week. We'll see how it works out...

I am going to their site!!!
Knitting a 1og cabin throw

Soup and bread is such a great winter meal. Yours looks delicious. I'd say the bread came out great. Bubbles smubbles - who notices in homemade bread.

For some reason never been a focaccia fan, although I love most things Italian. Gotta make some soup though!

Yum, Zingerman's is the best! Last year my parents sent us one of their bread gift boxes (this was when we were all isolated) and it was such a treat. This year, we sent gift boxes to my in-laws and my brother- and sister-in-law. It's been years since I've been there in person (have I told you that my brother went to UofM?), but we have regularly had their treats by mail. I hope you'll share a review of the soup cookbook once you've have a chance to try more of the recipes!

I have to say that your focaccia looks pretty good to me! Maybe this year will be the year I finally get serious about baking bread -- it's something I've wanted to do for a long time.

Your focaccia looks perfect! I love olive focaccia, or at least, I used to love olive focaccia. I know I could make it GF, but that yeasty, warm, nutty flavor would be missing. Oh, well. Your soup-bread combo looks like it would make a delicious meal!

That foccacia and the hat both look great. I can't bake bread unless we have a group eating here -- we eat too much of it ourselves too fast! No self control with home baked bread. But I am definitely making soups this month.