Stepping Away from the Edge
Home Archives Profile Subscribe
Read With Us: Up Next!
Get Strong: Your Monthly Fitness Challenge Jan 2022

He wore it all the time. While fishing. While snow-blowing. At probably every one of Brian's hockey games. Whenever he was cold and needed a light layer, you'd find that sweater in the picture.

Anyway, the sweater has been gone for a very long time. Maybe even another decade? And Tom still grieves it.

It also turns out to be the kind of sweater that is hard to replace.

Unless you're a knitter.

In brown.
(Because when you're color blind, you always choose brown.)
(He may actually have thought the heathered maroon sweater was . . . brown. Just sayin.) 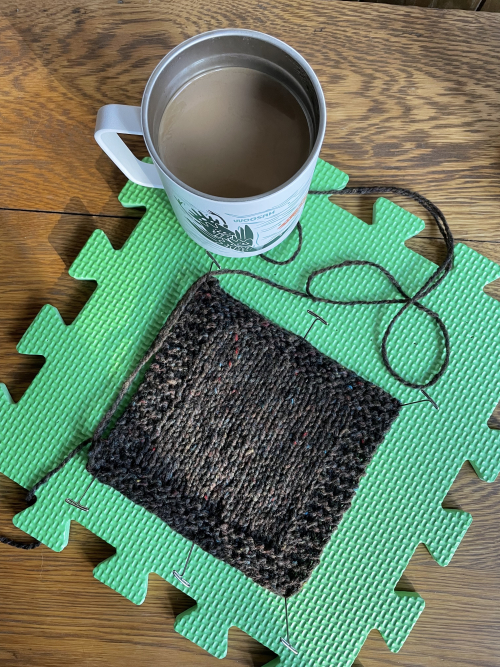 It took us awhile to decide on a pattern. Tom wanted . . . very basic. Plain. No frills. I was hoping for . . . a few frills? Maybe a basic gansey? But it's not my sweater, and he wants plain, so we're going with this one (which is as basic as one can get when knitting a sweater). And I'm knitting it with Shelter (in the Meteorite colorway; brown, to be sure . . . but with interesting flecks of color in there for some excitement).

I'm afraid the knitting content here is going to be a bit dull for a while.

(Until, of course, I get my Gauge Dye Works yarn for the soon-to-be-released Hunter Hammersen "feather hat." That will spice things up for me and provide a little reprieve.) (Please note . . . it is not actually called the "feather hat," but it will always BE the "feather hat" to me. Thanks, Bonny!) 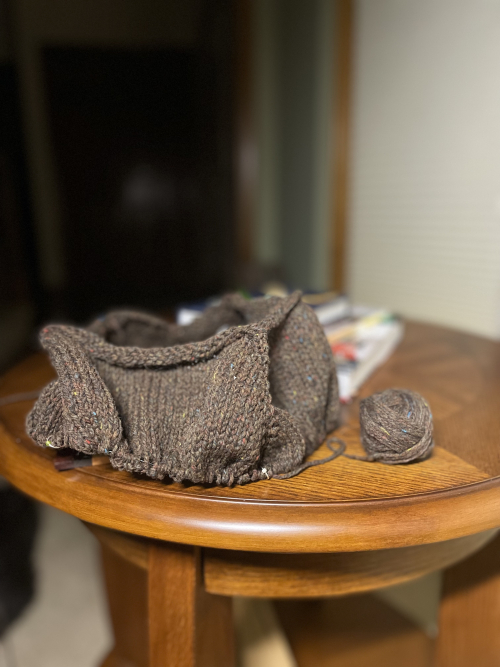 In the meantime, I'm knitting a man-sized, plain-no-frills 100% wool sweater.
It's a plain brown wrapper!

You have my sympathy -- I have knit several of these plain, no-frills man sweaters, and sometimes they are boring enough to want to stick a needle in your eye. But I'm guessing the yarn is offering enough of a diversion that yours won't be quite that boring, and at least with all that stockinette, maybe you can also read/listen to an audiobook while you knit?

I'm kind of in that same crafty space myself this week, as I'm plying my combo spin. There's a lot of yarn to be plied, and plying doesn't have the same appeal as spinning the singles, so it can get tedious. I'm really excited to see the finished yarn, though, so that's at least a good motivation to get it done!

A man sized sweater - wow! It is going to lovely and at least is isn’t on small needles. I am still working on my Musselburgh and ready to cast on a second sock.

Oh wow! My sympathies. LOL Some years ago - probably close to 15 or more, Colin wanted a plain sweater in a plain ivory colored yarn. It was a disaster! And ended up in the trash (over $100 worth of yarn). I'm not going there again.

And I got my shipping notice on Feather Hat Yarn yesterday! I can't WAIT!! LOL

All of the knitters recognize that this sweater is a labor of love! At least you have flecks of color for some interest, and can look forward to yarn for the feather hat. I am glad that you recognize the "true" name of this hat. Hunter Hammersen and Gauge Dyeworks have named the hat pattern Stochastic and the yarn Monte Carlo, but that's just nonsense to me. ;-)

But I'm also betting it will be spectacular when finished.

You go! I hope you can do something like read or listen to audio books when you're working on that. But what a lovely thing to do! Of course now I need to know how he lost it.

Love at its truest right there. :-) I’m make the Olivier Pullover - I’ve had a cable itch for quite a while. Now that I’ve got some brain capacity (or trying to preserve what remains!) and time…off I go. Not sure I’ll wear it this year!

Dale would adore a sweater just like that. Go you, Tom is a lucky go! And I can't wait for the yarn to arrive and the pattern to be released so we can knit feather hats!

Unless you are one project a time knitter it sounds like the perfect excuse for second project to add a bit of excitement and variety for those times when you have had enough of brown! As long as that is not all the time......

You chose a great pattern and a wonderful yarn (those flecks!) ... and I'm sure this sweater will be the last plain one he needs!

Oh Lordy. I will pray for you. Somehow I think at some point that is going to be a slog.

Good thing you love that man.

Oh man - I knit one plain brown V-neck cardigan for my husband. Then we found out he is allergic to wool and so I was off the hook. The Brooklyn Tweed yarn is very nice and I'm glad this brown has a few flecks of color. I am glad you have another project or two to change up your knitting.

Well, at least it is a raglan and that’s something in my book. And it looks like a rich brown with some depth to it, at least in the picture. Be sure to find a really, really good audiobook. For some reason certain books, music , locations work better than others as knitting backgrounds. Especially for long projects.

Even for myself, sometimes the sweater I want to wear is not the one I want to knit. I hope you both get joy from this one.

You'll be surprised at how quickly a plain sweater will work up and it will be worth every stitch, every minute by how much Tom loves it!

Love that Tom loved the sweater your mom made for him. And that you're replacing it for him! But all stockinette. You ROCK!

My son-in-law called with "bad" news one evening. I thought someone had died. He wanted to let me know he'd lost the first thing I knit for him, a Graham hat, his favorite. I had finished it, in front of him, one year when he and our daughter showed up three days early (wonderful surprise) for ThanksHannuMas. Of course it was replaced, and mailed, tout de suite.

Currently, the Graham Hat/grab stitch variation from last week has been frogged. I'm now using the cables from the Affiknity Sweater to make a hat. Fits great with the 96 stitches in the ribbing from the ripped out hat. Figuring out the decreases will be a fun stretch for my brain.

That, and my Musselburgh, are taking turns. I got a mis-dyed Gauge Dyeworks yarn, in Whiskey in a Teacup. The second half of the hat will be in dark grey, no stripes. I think I'm going to love it! Grey hat with striped brim, or striped hat with grey brim!