Okay. So a couple of weeks ago, I showed you my disappointing "FrankenCowl" . . . whining a lot about how unhappy I was . . . and going on and on about the ways the colors were (not) working out . . . and blah blah blah. But not really willing to do anything about it.

Later that same morning, I jumped on a Zoom call, intending to cast the monster off and be done with it. But, suddenly inspired, I ended up ripping it right back to the "scene of the crime" instead! (I knew I'd never be happy.) (And even though I never want to do it, I'm always happier when I take the time to rip back and re-do.) (Sigh.) I sat through my Zoom meeting ripping . . . and rolling little balls of yarn. I ended up doing a lot of rolling and cutting and re-rolling the balls of yarn . . . so I could plan how I wanted to work them into the rest of the knitting, hoping to wrangle those oddball colors into a more pleasing configuration. I got out my postal scale and I started weighing.

And then I jumped back in.

My goal . . . was to carry that darker reddish color all the way through the cowl (because it was such a contrast to the other 2 skeins). I almost made it, too -- thescale was getting quite a workout toward the end. (If you want to see the "before" shot, click here.) It's really kind of funny . . . because this is such a nice, easy, rhythmic knit. And I made it all complicated with my color-working. Oh, well. I love playing with color, so it was a good kind of knitting adventure for me. (If I were doing this again, though, with this same yarn, I would have changed things up with that darker color earlier in the process . . . so it could have been more of a "theme" throughout the project. But I didn't want to rip THAT far back for this one.) 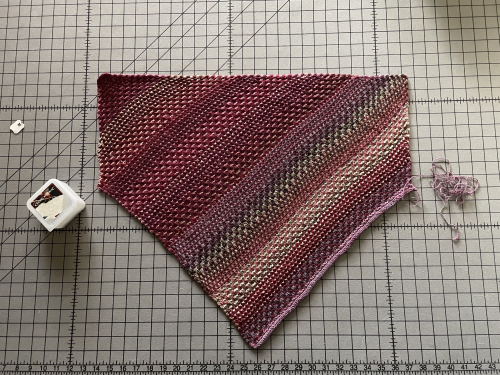 And in the end, it's no longer a FrankenCowl! 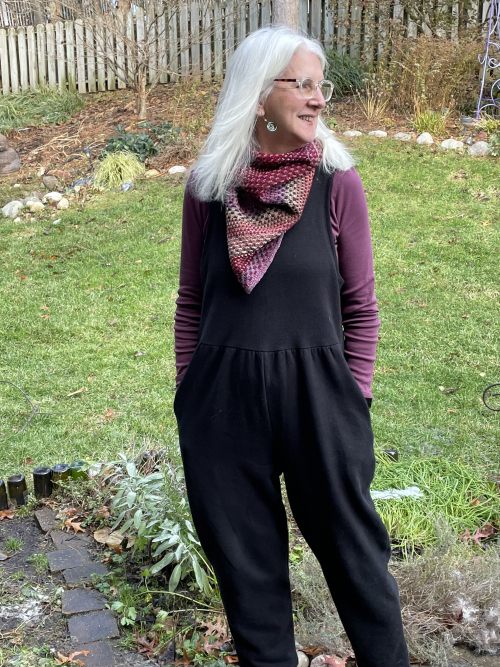 Break up to make up, that's all we do
Yeah, first you love me then you hate me
That's a game for fools 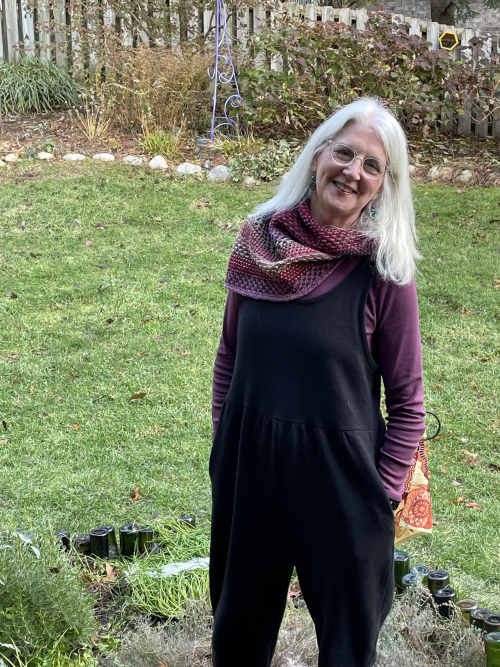 You can find the details here, on Ravelry.
(And my crazy jumpsuit? It's from Conscious Clothing and it is THE MOST comfortable "pants" I own. Perfect for post-Thanksgiving, y'know???)

How about you? What are you working on this week?

That cowl is wonderful! I'm not sure what to call it now (Wondercowl?) but I'm glad you ripped back and re-knit it with a plan. That whole outfit looks terrific, and the cowl is just the thing to pull it together. Well done, Kym!

The cowl turned out beautifully! It was worth the ripping and rolling.

Got here early for a change! Love the way you changed it up! So worth it. The red is gorgeous.. And it is helping spur me on to the FOURTH try on a truly simple hat that I just couldn’t get the hang of. Yesterday I finally made that breakthrough. I think. The jumpsuit is fabulous on you. Too bad that I am pretty short and would probably look like a toddler in it. (Funny, but true.). Never mind. You are are inspiring me to finally get going on that Shift. That word ‘rhythmic’’ was the key (although watching slip-stitch knitting on you tube recently struck me as flowing better for a thrower. I am a Continental knitter (hate that term ‘picket’.). We’ll see.

I meant pickeR. No fences involved.

Love the cowl but LORDY MAMA THAT JUMPSUIT!

The cowl is absolutely perfect now and I love how it looks with your jumpsuit - which looks like the most comfortable thing to wear! (I'm still surprised every time I see you with long hair. You'd think I'd be used to it by now!)

The cowl turned out so well Kym! Good for you ripping out and rolling yarn back up. Patience of a saint and all that stuff. and WOW - the jumpsuit is so fab on you!!!!! Love it.

Wow, what a difference! I am glad you didn't give up on it because it looks so much better and clearly suits you very well.

Oh, that turned out GREAT! I am totally with you on the rip & redo, it's so painful to think about doing it... but it almost always pays off! Zoom meetings are perfect for that type of activity. ;)

It turned out great Kym! I've got an unfinished Nightshift in the closet. Seems it may be better suited for a couple of cowls. Your look is fab!

Your cowl looks fantastic! I fell behind on the one I'm knitting due to a flare of fibromyalgia, but I'm back to knitting now with frequent breaks to do some stretching exercises. I am nearly done with the section right before the decreases, so I hope to have it done in time for Christmas.

The cowl turned out beautifully. Sometimes the lure of a finished object is hard to resist and so I forge ahead when I should rip back until I reach a breaking point. The truth is I've never been sorry about ripping and redoing a project - once I get all the yarn wound back into balls. You look fabulous in that jumpsuit.

Well done you! And don't you just love having a scale that can help with knitting?! :)

You fixed it right up! Love what you did and how your broke up the color and got the whole thing on track! Love the pants!

What a happy ending! (and now you've made me want to knit one!)