Stepping Away from the Edge
Home Archives Profile Subscribe
Medical Care . . . the Way It Should Be
Museum of Me: The Holiday Exhibit

So . . . when I got the notice of my appointment at Mayo, I had a few decisions to make. Number one being . . . how to get there. Now, the last two times I visited Mayo, I was incredibly stressed, under duress -- and sick. Tom handled everything. He drove me. (For us, it's an 8-hour drive. But not an easy 8-hour drive -- because of the lake and driving through Chicago.) But this time, I knew I could handle the journey as a solo trip -- but driving that far in December in the north is potentially . . . challenging.

I decided to fly.

It was a highly considered decision, you know . . . with Covid and all. 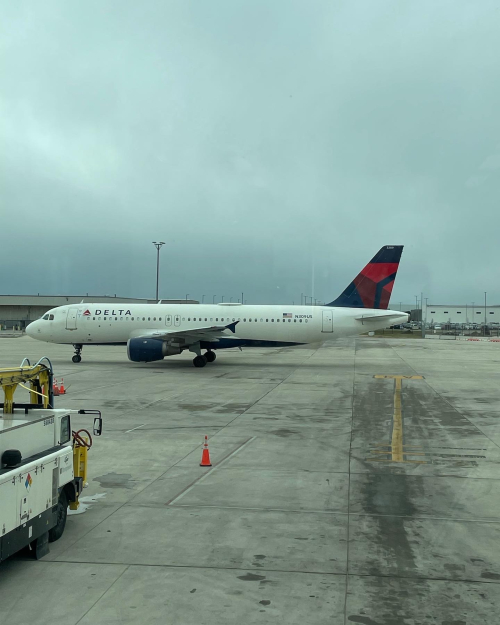 But I decided to go for the air option, and I scheduled my travel to keep myself as separated from others as possible. I even upgraded myself to First Class so I could be in a less populated (and less crowded) part of the plane. (I have many, many "miles" built up. . . ) I chose seats that were "singles" so I'd have no "neighbors." I gave myself connecting flights with enough time to comfortably move between gates without having to crush in with other people on "trams." I felt . . . fairly comfortable about everything. After all, my flights were short. My time in the airports would be minimal, and my time in the air would be brief (about 2 hours, total, flying time). I had arranged for a car/driver to retrieve me from the airport to my hotel. I was . . . good to go.

Until it all fell to shit. 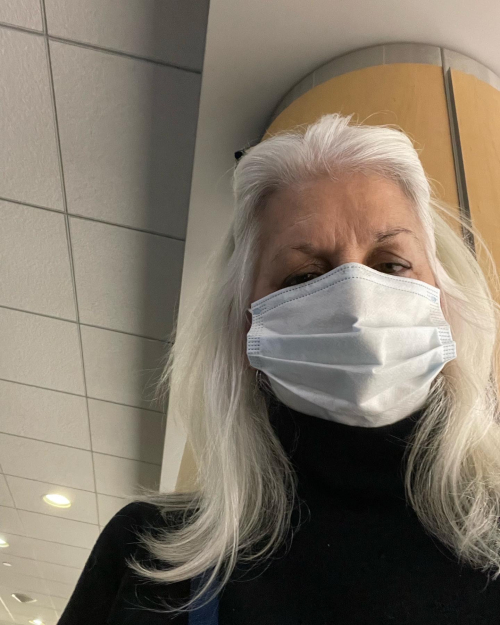 I am a veteran traveler. I know better than to count on things going as planned. But, oh boy. Things really went off the rails on my trip out! That's me . . . ready to (finally) board my outgoing flight . . . after what turned out to be a four hour delay. My entire plan unraveled at the first step! What I had planned as a short stint in airports . . . turned out to be eight hours in airports. By the time I arrived in Rochester - at midnight! - I was exhausted, stressed, and generally not a happy camper. (And I ended up sharing my car with other shell-shocked Mayo patients who had no waiting car at the airport. At midnight. During a wind storm. With windchills below zero. Because it was the right thing to do.)

Best laid plans. And all that.
(And, yeah. Driving would have been faster.)

Coming home yesterday was much smoother. (Although it's never fun to get to the airport at 4am only to find that your first flight has already been delayed. Sigh.) I will say that the First Class thing did work out brilliantly (and comfortably). I was first in/first out on that plane, and I had no one breathing near me (although I know . . . circulating air . . . ). Best thing I did, upgrading to First Class.

And I did have time to knit yesterday. (I was actually too stressed on the way out to knit. It was bad.) 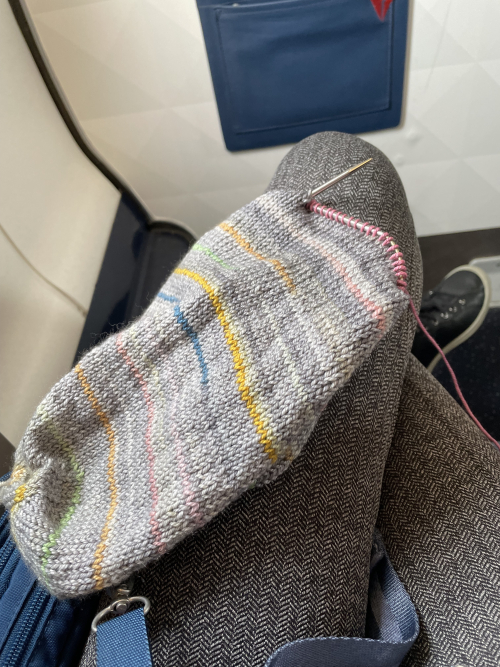 Any guesses what I've got on the needles?
(Hint: it was perfect travel knitting.)

Now. I just keep my fingers crossed that I didn't pick up Covid during my travels. (Sigh.)

I think you made smart decisions and took all the precautions you could. I also think the benefits outweighed the risks in this situation because of all the good that will come from you going to the Mayo. I hope it all pays off and you are perfectly healthy in the days/weeks to come!

Is that a Mussleburgh hat? Very calming colors.

I am hoping that you remain COVID free... the stress of travel, not something I miss - normally, I don't mind all those hiccups (but generally I am traveling WITH someone who freaks the eff out at those things) - I am glad you are back home and tucked safely into your home!

(and I love your idea of having Saunders on hand... I have purchased a copy this morning to revisit!)

So sorry you had so many travel woes. I have to say that Colin & Mailing have been traveling a bit (back and forth to TX, etc.) with no issues whatsoever. And my work folks are flying all the time with no major issues. Guess you won the prize and I am so sorry for that. BUT...I'm so thankful you could go to the MC and get the advice/care/help you need. And I am so thankful you are now home safely (and healthy I hope). xoxo

I'm glad at least the Mayo Clinic part was successful. Yeah, traveling, I'm not planning any for a while. I hope you'll stay healthy and you made some great choices!

The best-laid plans... are almost guaranteed to go off the rails if they involve air travel. When we flew out to CO to move Ryan back this summer, I was quite happy to drive back. I'm glad it all worked out in the end, albeit with a few big bumps. I will be sending you all the good anti-covid juju for the next couple of weeks. I think that must be a Musselburgh hat in lovely colors!

I know it's all worth it ... love your knitting! Best wishes for a healthy, less hectic rest of December. and for telemedicine follow-ups for the next steps!!

Gah! Fingers crossed that you didn't pick up anything during your travels... or is that travails!?

Musselburgh: the valium of knitting. Excellent choice! I'm on my fifth one, which should tell you how things are going here. ;-)

I know that all of your good juju will keep you Covid free. Sharing your car - you got me all teary here. xo

I think traveling by air these days is a crap shoot. I'm glad you got there and arrived home safely. I'll hold another good thought that you remain Covid free. I'm also guessing the knitting is a Musselburgh hat. One of these days I'm going to try one.

I don't know what the knitting IS, but the yarn sure is pretty. Hopefully, now you can relax into the holiday.

I think you're probably safer flying than you think -- everyone has to wear a mask, the air is circulated and filtered, etc. And you're completely vaxxed, too. I'm sorry to hear that the plans completely fell apart from the get go, but such is life these days, especially when dealing with the airlines.

Fingers crossed that you are have no symptoms and are feeling fine in a few days. All the reasons you lived through are why I hate travel in general. It's happened to me too often. Although, your trip and the treatment you'll receive is certainly worth the price. (fingers crossed!)

Oh my gosh, Kym--I just caught up on blog reading. (I've been catching up on other Life Things this week and so sort of fell out of cyberspace for 48 hours or so. And, wow! I missed a lot!) I now realize that in our email correspondence and your reference to traveling, well, my wishes for happy travels were a bit...uninformed! So much--so much--in a few short days. I certainly hope that you not only stay well, virus-wise, but that your Mayo plan has fantastic results. It sure sounds like a Mayo visit is the best experience one could ask for. And Chihuly chanderliers? Awesome. xo

I need to knit a Musselburgh hat. That is clear.