Stepping Away from the Edge
Home Archives Profile Subscribe
Read With Us: The Wrap-Up
Fall Gardening Week 3: Bring 'em Inside

That's Me In the Corner

I've knit a lot of sweaters over the years.
But I've never knit one sideways before. 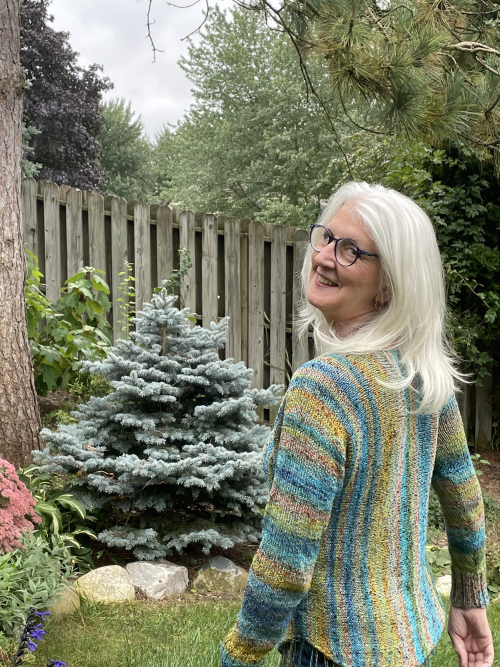 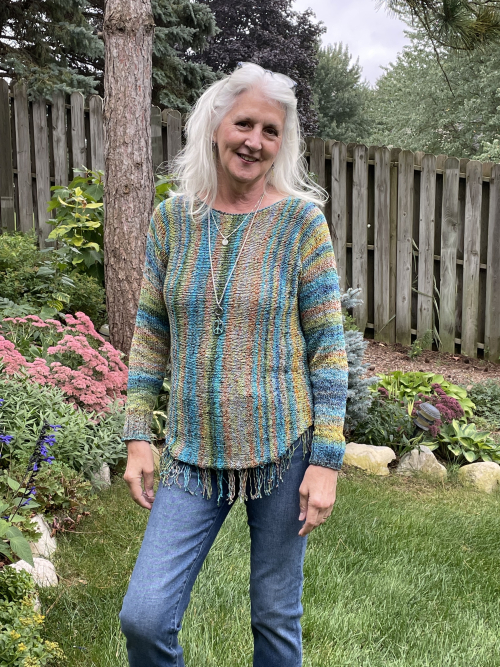 It was kinda weird to knit a sweater from cuff-to-cuff, sideways. I had to wrap my brain around it a few times there . . . on the fly. Row gauge was a huge issue for me (on a sideways project, the stitch gauge determines length; the row gauge the width), so that had me flipped around, too. It's a little like knitting origami. 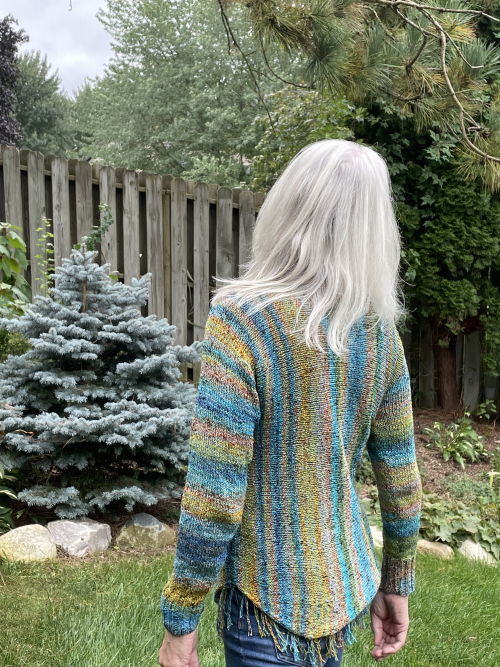 I LOVE this! The yarn choice, the colors, and the fit is perfect on your Kym. I even like the fringe (and I'm not much of a fringe person). Well done!

I am with Vera! This is just gorgeous! I love the fit, the shape, and the colors are so perfect for you! Well done!

Absolutely gorgeous and I love the yarn you used! Perfection 😊

It looks fabulous on you, Kym! Despite the struggles with row gauge, it looks like it ended up pretty much a perfect fit.

And thanks for the earworm! I had it in my head as soon as I read the title of your post and didn't even need to click through to see the video to know what it was.

Love it! Looks great on you.
One of the non knitting things I am working on this week is learning to play Losing my Religion on guitar :)

Love it, and it looks so good on you! The fringe detail is fantastic.

What a great sweater! In spite of your row gauge difficulties, it looks like a great fit and such a wonderful color. I hope you enjoy wearing it!

I had Michael Stipe and the mandolin in my head as soon as I read your title! That is a lovely sweater and it looks great on you. I'm a little iffy about fringe, but it looks good and really goes with the great shape of the sweater. Well done!

That's SO YOU!!! funny how you came to it by "losing your religion", huh?! Seriously, the "different" construction, the not-matchy stripes, and the fringe ... LOVE it!! (and whoa, look at how long your hair is!)

What a perfect fit. And GREAT HAIR pictures!

I adore this sweater and it's just so perfect for you! That bit of fringe is very hippie-ish and the colors are awesome and your hair looks freaking fabulous!

The sweater is gorgeous and so is your hair!! :)

I think it looks lovely on you! I've never even attempted to knit a sweater sideways - I'm lucky I can get it done the usual way. But what a good adventure with a wondering ending.

Love, love, love! 70's me loves the colors and the fringe (Joseph and the Coat of Many Colors vibe) and the NOW me loves the fit and flow. Fantastic job, Kym!

I love it! I love the dip in it so much! And the yarn is perfection!

Amen to all of the above! Was it harder to maintain gauge with a non-woolly yarn? That would be my one concern. Although the Summer Sesame is really beautiful and will rth the effort.

That sweater is awesome and you look beautiful in it!

Congrats on a great finish.

You can be a modeI! I need to go back and check the yarn you used...hoping it is not wooI!

The fit, the colors, the style and the texture make this sweater so unique. Love everything about it. It also looks comfortable and cozy but with a more stylish air. Fantastic, Kym!! You're playing one of my favorite songs!

You are rocking this sweater. The sweater fits well and looks great on you. Well done.