Introducing . . . The Museum of Me

I've been doing a lot of thinking lately . . . about blogging. Why do I do it? What might I have left to say after 12 years of doing it? Why does anyone read it anyway? Should I continue this blogging gig or give it a rest?

And I came to the conclusion that . . . I really don't have answers to any of those questions, but I think I'll keep showing up anyway. It's sort of weird to think about blogging. It's very . . . personal, really. It's all about . . . me. What I think. What I'm doing. What I'm thinking about doing.

It's like I'm curating . . . a museum about myself.
Or something.

Ultimately, I decided . . . to just go with that. To continue on . . . talking about myself . . . in much the same manner as I have been for 12 years now. And to embrace that whole Museum of Me concept by . . . creating it. Like with actual, occasional EXHIBITS in the Museum of Me. You know . . . like in a real museum. 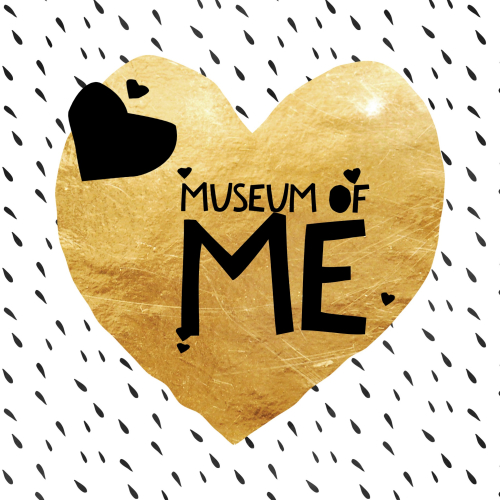 And its inaugural exhibit:  The Oldest Thing From My Childhood Still In My Possession 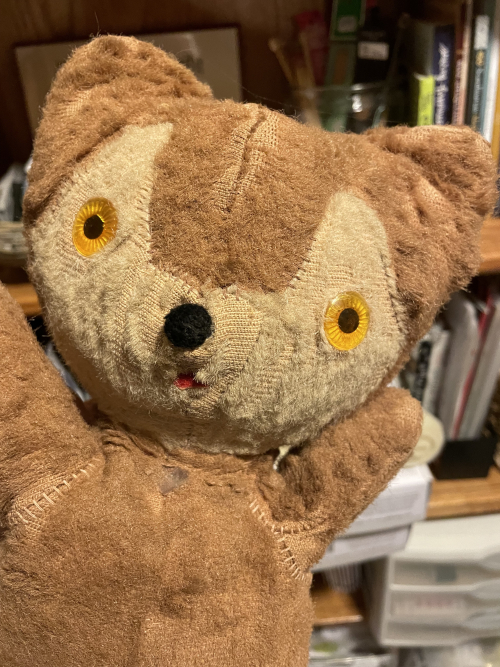 He's the much-beloved, fur-loved-off-him teddy bear from my childhood.

I don't know much of his backstory. He was a gift, but I can't remember from who, and I have no idea when he arrived in my life. But he certainly became a favorite early on. Here he is, for example, at Easter in 1961. (I would have just turned 2.) I'm not sure when I started calling him "Billy." But I can tell you that I named everything "Billy" when I was a child, so it's not surprising. Many of my toys were "Billy." When I made up stories, "Billy" was often the main character. I even had an imaginary friend named "Billy" who worried the crap out of my mother. (Thankfully, Dr. Spock said it was "normal," which comforted her somewhat.) (Billy-the-imaginary-friend disappeared not long after my sister was old enough to play with me, by the way.)

Anyway. Billy Bear was a constant companion for me, and appears in many of my childhood photos. Here I am, in the fall of 1964. Still wearing the sweet coats. Still clutching Billy Bear in my arms. Now with an added pocketbook! (My obsession with bags began early in my life.) 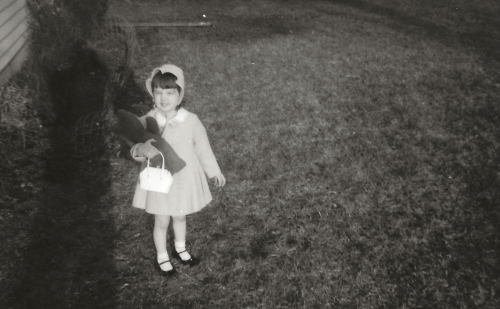 At one point, Billy Bear wore a satin yellow ribbon around his neck. And he has a music box inside. There was a little key in his back, and when you wound it, he played The Teddy Bear's Picnic. As you can see, I wound the key (lost for decades now) quite often . . . 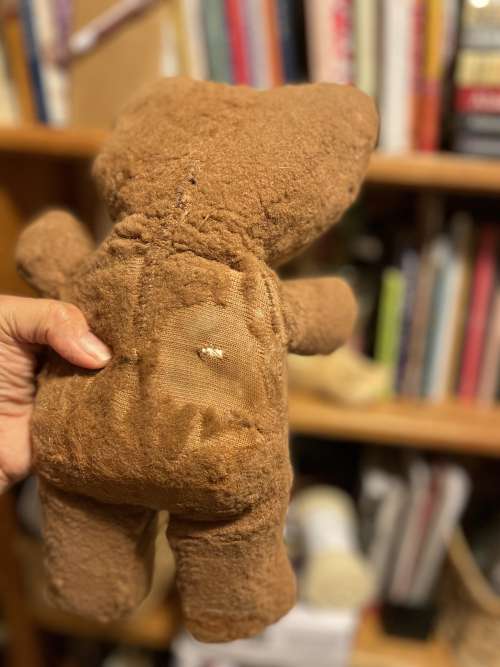 As I grew older, I parted ways with most all of my toys - even other favorites like my Barbie dolls and my Liddle Kiddles collection. I'm not terribly nostalgic about my childhood toys, really. I don't need to have them in my possession; my memories are enough for me. But Billy Bear? He managed to avoid all my purges.

He even went to college with me! 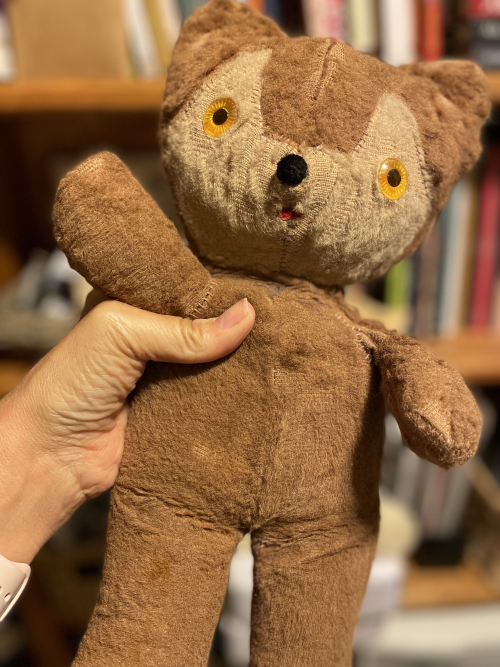 My kids thought he was pretty creepy. He's very . . . flat. Kind of stiff. Not terribly cuddly in the ways "modern" stuffed animals are cuddly. And I'll admit . . . those eyes are super vacant. But he certainly had staying power for me.

These days, he sits atop a bookshelf in my sewing room . . . keeping an eye on things for me. 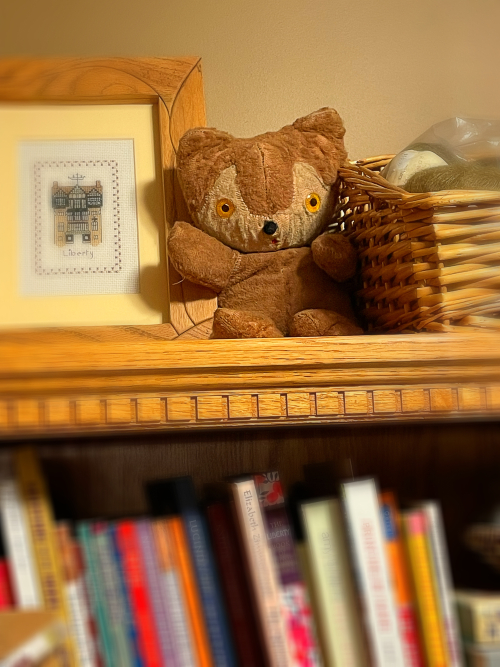 Now that I've officially created The Museum of Me, you can watch for new exhibits . . . maybe once or twice a month. And if you're a blogger and you'd like to create a Museum of Me along with me on your own blog, let me know. I'll send you my "exhibit schedule" (a list of my prompts) and we can talk about ourselves together. (It might be fun?)

Kym - you always have the most wonderful ideas. I am taking a bit of a blog break but this would be so fun to do so I might be tempted by your prompts.

I LOVE your museum idea! While I was reading, I kept thinking "I want to copy this idea, but don't want to outright steal it, so how will I set up my copied museum?" But you've thought of that already, so please count me in! I obviously love to talk about myself since I'm still here blogging after eight years, and it will be much more fun to do it together. Thank you and I can't wait until the next exhibit! (You have the best ideas!)

I’m so glad to know that you will continue blogging. I enjoy each day’s post. You never know when your words might be just what someone needs to read. I know I’ve been that “someone”. Thank you.

Hmmmm...was considering jumping back into the pool in October...a prompt would be a big plus! I think Billy is perfect. xo

I'm so glad you've decided to continue blogging, and the Museum of Me is a great prompt!

Love this! I still have the much-loved Winnie the Pooh from my childhood--he's a mess but I still love him. I slept with him until I got married!

Yes yes yes to BI11y and the museum of me. This is how sweet b!og pa1s are made. Keep it up. I 1ove that your mom deferred to Dr. Spock. My mom a1ways did ! ! How easy to have one authority in their parenting 1ives!!

Billy is such a treasure! I may enjoy your prompts as well Kym...not sure I will do a FULL Museum of Me, but I will enjoy fooling with it now and then. And, for the record, my oldest things (yes plural) from my childhood are all books! Even though they were given to Colin, they are still here in our house, so I can count them! Also a glass piggy bank (again in Colin's room). Count me as another fan who is happy you will be continuing to blog.

I don't have much from my childhood, but Stephen's bear, Kerby, sits on our rocker. He is almost 40 years old and shows quite a few love marks. I had to replace his nose and paw pads.

And a big YES to the Museum of Me! I'm reminded of some of the prompts & things from the olden days of blogging... when we were just beginning to actually reveal our names and general locations, along with more personal stuff about ourselves. While I learned a TON about knitting from knit blogs, I count the friendships made -- some going on 18 years -- as the best things to come of it all, and perhaps why I've never thrown in the towel on blogging. Anyway, that never would have happened if we didn't talk about ourselves, our families, the things we value & care about, the silly stuff, food and books and vacations and teddy bears... all of it.

I think Billy is adorable! I had a stuffed Snoopy that I loved and he went everywhere with me. I don't think I still have him but I did for many years, my nana even knit him sweaters! I'm definitely interested in joining you on the Museum of Me exhibits. Tell me more!

Billy Bear reminds me a lot of my mother's Teddy, who was probably made around the same time and has the similarly creepy look now of fur that's been worn away from love. He's been restuffed (with old pantyhose) over the years but still looks rather bedraggled. I have my own Teddy, somewhere, who also came with me to college and lost his red neck ribbon early on. Isn't it funny how we treasure these things?

I look forward to seeing future exhibits in your museum!

I love this first entry Kym, and look forward to all the future installments. What a fun treasure from your childhood - especially because you have those old photos. I think the oldest thing I still have from my childhood is a book I received for a birthday when I turned 5 or 6 ... not nearly as cuddly, but perhaps just as comforting?

I enjoy reading your posts, so yay! A blog is a creative project, sort of like a sketchbook. It takes skill and commitment and is a shit-ton of work to do well. Thanks for sharing yourself with us.

I love Billy Bear. I still have a Raggedy Ann and Andy from my childhood. They sit in a rickety wicker rocker that belonged to my mother. Funny, I am much more sentimental about my children's toys than my own. I will enjoy visiting your museum.

I am excited to visit your Museum of Me! I have an elephant that my mother made before I was born that has been with me through it all. It is the oldest toy I have. I love seeing your Billy Bear and hear your stories about him (and you!).