Stepping Away from the Edge
Home Archives Profile Subscribe
Signs In My Garden
A Week Filled With . . . Questions

As I putter around in my garden, I run into a garter snake once in a while. I know they're in there . . . hanging around in my shrubs and tall grasses (as they do). But I don't usually see them very often . . . maybe one a year? Maybe less?

When I do encounter one in the garden, I'm always startled. Really startled. Because they move so quickly. And they camouflage so effectively. I never see them . . . until they move. I'm not afraid of them, really. I don't mind that they're out there, in my garden. But they will always make me jump a little bit. And then run for my camera! (Because they're kind of cool.) (They're also good for the garden - click here to learn more - and are actually a sign of a healthy, well-balanced garden.) 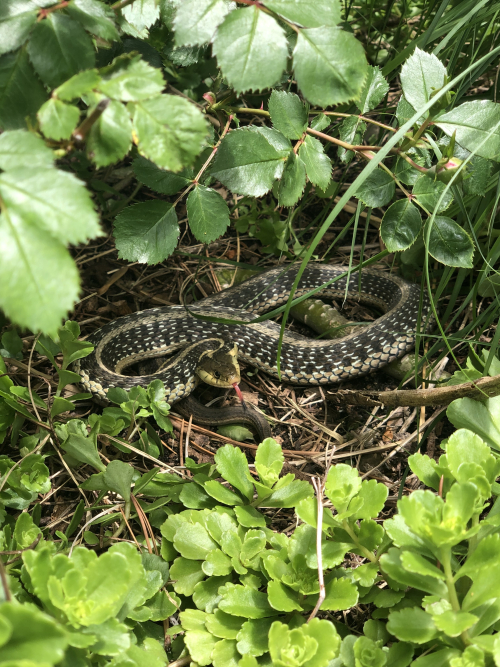 This one . . . really surprised me! Because it was bigger than most garter snakes I see (about 3 feet long) and it moved across my path from the grass to this spot under the rose bush . . . quick as a wink. (It was not happy to see me, but it did pose for several photos.)

For whatever reason, I'm seeing more garter snakes than usual in my garden this year. Lots more. Enough that I poke around a bit with my garden tools before moving in under thick cover to do any weeding or digging. (I figure they don't want to see me the same way I don't want to see them, and my "poking around" gives them fair warning.) 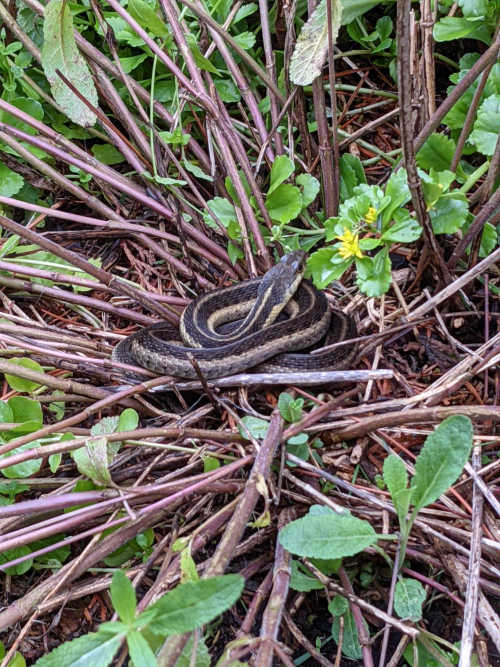 Here's another one (much smaller; more typical) . . . just sunning itself in the midst of salvia plant. (Brian took this photo.)

The other day, Tom was out in the driveway and noticed a couple - just out for a walk - suddenly take out their phones and start taking pictures in our yard. They'd spotted a garter snake and were fascinated! (To Tom and I, it's kind of old news by this point.)

I hope you have a great weekend.
With no snakes (unless you want to see them) . . .

Oh Dear!!! I know they are around...that's why Fletch gardens and I do not...and we've seen others besides garter snakes. Someone...I think it was Dee..told me that there seems to be an abundance of copperheads this year...not a good thing. Donning my wellies to go to the basement to do laundry because...you know...I've seen them in the basement. NOT good!

Interesting - I have seen a lot more frogs this year. Not pond frogs but little green frogs that hang out in the grass and garden.

I know we have garter snakes, too, but I don't think I've ever actually seen one since I was a kid. A few years ago we did have a pretty big black snake that we saw regularly sunning itself on our walkway. It always startled me and kind of gave me the creeps!

We've seen more snakes this year, too. They hide under the squash leaves where it is the most shady and cool. Smith thinks we have 3 in the whole garden, but there could be more. We are happy to see them, even if they give us a startle!

In the part of NY State that I grew up in there were Timber Rattlesnakes and Northern Copperheads, so I grew up terrified of snakes. We were taught from childhood to recognize them. One time I was canoeing on a lake in the Catskills, I was in the front and we were headed to the shore where several copperheads were sitting on branches in the water, they were coiled & ready to strike. I began to furiously back paddle and my friend finally saw them and we were able to get away from them...we were both shaking after that close call!
I found a garter snake in my garden here in Illinois a couple of years ago, it made me shudder & I had to run inside and wait until it was out of sight!

I nearly always have a heart attack when I see a snake, harmless or not! Though they fall into the category of creatures whose right to exist in a healthy environment I will fight for to the death ... as long as they don't want to live in my immediate environment. ;-)

I often admire garter snakes when I come across them, and yours are fine specimens! Like Debbie, it's the copperheads that stop me in my tracks.

I was startled by a garter snake in my back yard a couple of weeks ago (I jumped & yelped out loud) and don't remember ever seeing one before! I used to love them/catch them when I was a kid. I feel like I've seen a few more toads & frogs this year, but... I was in the back with Brian & the boys and we watched a garter snake haul a big toad into the ferns. Addie "rescued" the toad, but the next day they saw a garter that had obviously had toad for lunch. It slithered into the ferns and Brian grabbed its tail to get a better look... but hauled out a completely different snake! And decided that was his sign to leave them be. SO WEIRD!!!

My parents set a trailer on their property in Wisconsin for 'vacations'. Hooked up electric, but no water. Brought in carboys of water and had an outhouse. The bathtub in the trailer could be used to bath by heating water on the gas stove and just drained to the gravel pad below. Not used often. Then there was the summer my dad was sleeping in the back, I was reading in the 2nd bedroom and mother was taking a 'sponge' bath in the bath tub when I heard her gasp.
"What's wrong?"
"There's a snake in here behind the toilet!"
She was in no position to do anything about it. So I got up and went to the bathroom (it was between my room and the main bedroom where my dad was sleeping). By this point it was moving towards that bedroom. My dad had had a heartattack a year or two earlier, so the idea of his waking up with a snake cuddling him was not great.
The snake was 5-6 ft long and black, so I was pretty sure I wasn't dealing with anything venomous. The snake was on a blanket my father had kicked off the bed in his sleep. I opened the back door that opened off that bedroom. Grabbed a corner of that blanket and gave the whole thing a flip towards the door. The snake flew off in the proper direction. No one hurt and I shut the door.
Later we told my dad when he woke up. He poo-pooed how big the snake had been. My mother told him he would have thought it 2xs larger than what we said if he had woken to it crawling on him.
During the next few days we saw it in the open mowed areas and when my dad saw it he had to admit it was every bit as big as we said it was.

I was warned that this year there would be more copperheads. Supposedly it is due to the cicada thing. So, maybe it is the same with garter snakes???

You took a great photo of the first one with his little forked tongue sticking out.

I got pretty used to snakes when we lived in Florida. In the summer I got pretty good at scooping them out of the pool without hurting them. We also had a Ring Neck snake that always had her babies in our garage.

Since we've been here I've only seen two snakes. Both were harmless garter snakes.

Ahhh--- snakes! We probably see a snake once a week in our yard. Luckily - like you - they're just garter snakes and nothing to fear, but they still make me jump! In Texas, of course, the snakes were much more dangerous. My mom was bit by a rattlesnake when she was a little girl and she's terrified of them. So anytime we would spot a snake when I was a little (often), then it was A Very Big Deal. Lots of screaming, neighbors running over, etc. I'm grateful that we can take that down a notch now.

Great pictures! They're so hard to capture given how well they camouflage and how quickly they move. You managed to get some amazing shots :)

We are now living in copperhead country. Haven’t seen one yet. Thanks for the heads up on their (they’re?) now being more plentiful (Crikey!). Will be more watchful now. Especially in the dark early morning when I can’t see what’s in my coffee-and-the iPad chair. (0ur garage is connected to the kitchen and the connecting door needs to be kept open for ventilation purposes.)

Yikes! (Also, ick!) I do not like snakes at all, and I'm thankful that they're not something I encounter in my garden (I think I've seen one ever). I know they can be an important part of the ecosystem, but they still creep me out.

Well, there must not be any snakes here because the frogs are proliferative. So much so that the cats caught one that somehow got onto the porch. They played with it all night. Fireman got up and it was quite dead. No trauma seen. Heart attack is my guess.

I don't think we have seen ONE snake in Wisconsin since we moved here. Wait there are many snakes in como lake we are told. Thats why we don't paddle there. Never mind!