No Stopping Me Now

So after the overalls . . . I've kinda gotten back into the sewing thing. (I lost all my sewing mojo last year after sewing all those masks.) 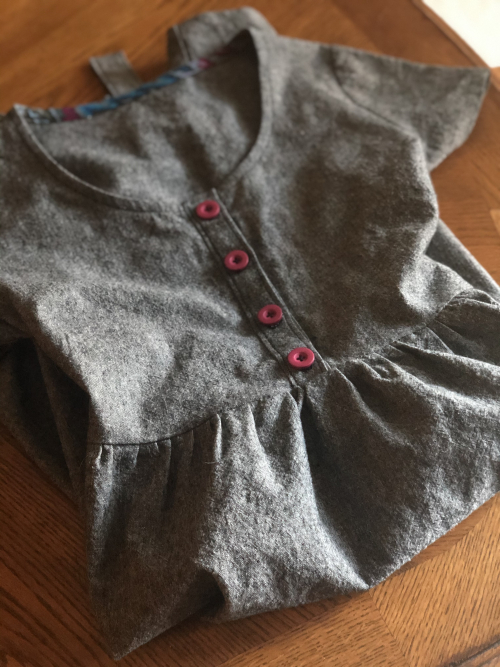 This week, I stitched up something that's been on my radar for a couple of year now . . . Meg McElwee's Hinterland Dress. I think it would be a great casual dress for summer (especially the sleeveless version), and I have a very nice piece of gingham linen that might work really well sewn up in this pattern. But . . . I didn't want to chance it with that nice linen right off the bat.

So . . . I sewed a "gauge swatch." In Sewing World, this is called a "muslin." (Or a "toile" if you want to sound European . . . or a little bougie.) Basically, sewing a muslin means you sew something up (or a part of something) in a fabric you don't care much about in order to see if you like the fit or need to make some adjustments. The goal - just like with gauge swatching in knitting - is that you end up with a well-fitting garment that you actually like and can wear when you're finished. If you're lucky, and things all turn out, you might end up with a "wearable muslin" . . . meaning you can actually wear your test-garment, too. (Unlike knitting . . . if you're not happy with the finished result you've sewn, you don't have the option of ripping out the yarn and re-using it for another project. Once you've cut it out and sewn it up? It's hard to repurpose.) 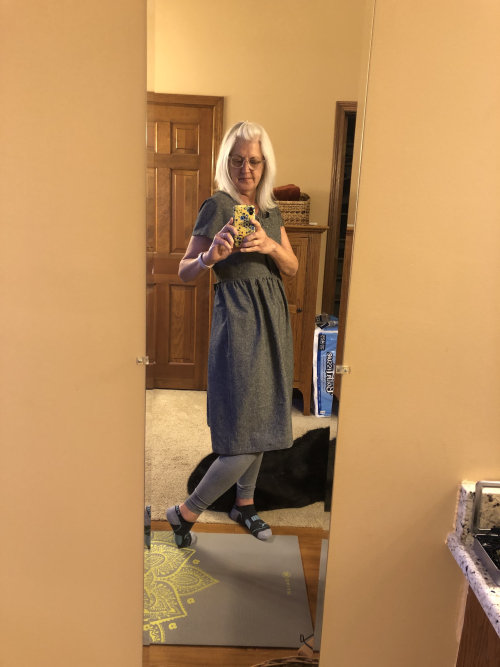 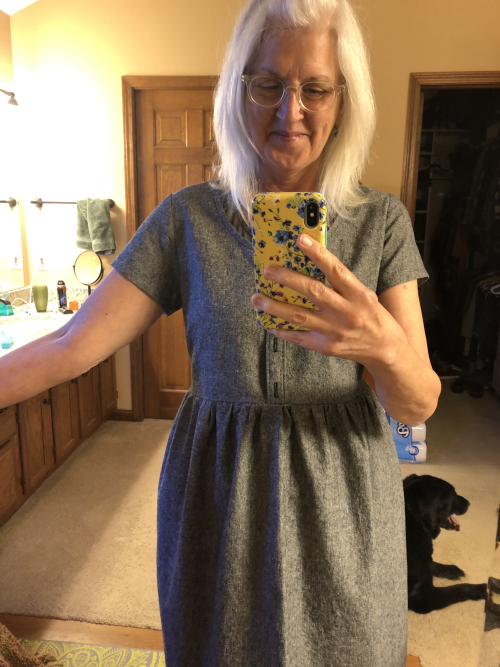 I could've gotten away with making this at least one size smaller, maybe two. Let's just say . . . I'm happy I added the ties. I definitely got a "wearable muslin" out of the process. And I think it'll look a lot better once it's had a chance to loosen up a bit after a few rounds in the washer and dryer. (Also when I'm not wearing it on top of workout clothes.) 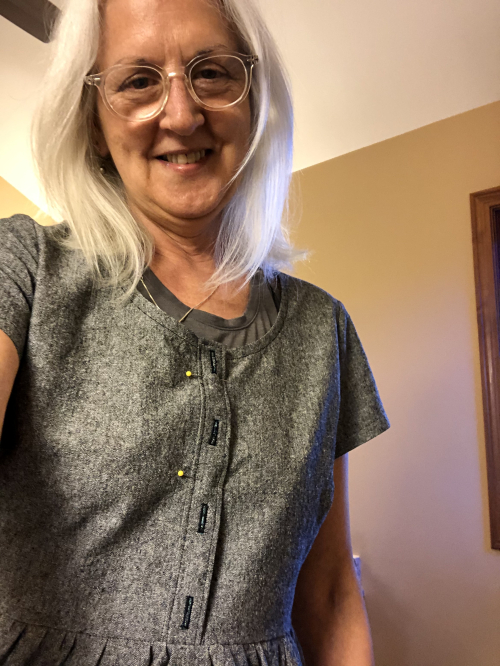 (And, yep. There's a wonky buttonhole in there. I got an eye twitch for a minute there, thinking about ripping it out and re-doing. But then I reminded myself . . . muslin! . . . and just let it go.)

Anyway. I think I'm ready to cut into that nice piece of linen now, and make another. Smaller size. Sleeveless. 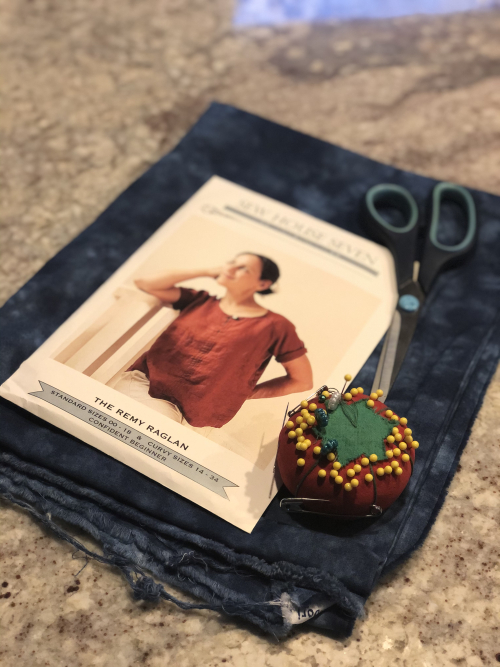 There's no stopping me now.

How about you? What are you making these days?

Oh gosh! I love your Muslin. How cute is that? Since I'm usually in jeans or leggings (or honestly, this past year - PJ pants...), I find dresses to be more comfortable in the summer hot months. I have several Tee shirt dresses that I got at Target the other year that are perfect for just throwing on and being comfortable. That top looks like it is going to be really cute Kym. Great job!!

Ooo! I have been eyeing that Sew House Seven pattern! I can't wait to see how your's turns out! (I got a new roll of Swedish Tracing Paper from Amazon yesterday so I can trace off some of the patterns from Sonya's new book!)

I have three pieces of fabric that I am hoping will become wearables and some waxed canvas for a tote. Thanks for the post - I am feeling motivated.

I think it's adorable on you! I totally understand the reasoning behind making a muslin, but something about doing all that work only to potentially come up with a garment that doesn't fit seems like it would be frustrating to me. I get that it's why you don't use the nice fabric, but even cheaper stuff is still consuming something, right? I'm sure it's just a mentality I have to train myself to have if I want to learn to sew. And I guess I'll have to make sure that whatever I use for my muslins could conceivably be something I'd be willing to wear!

As someone who hasn't sewn anything besides masks for a long time, thanks for explaining what a muslin is. I sort of understood before, but was a little confused about whether it was actually made out of muslin or not. Now I get it, yours looks great, and I don't even see a wonky buttonhole. Looking forward to seeing more sewing!

The dress looks great. I'm really looking forward to seeing it in the gingham linen.

Well, you probably KNOW what I am making. SOCKS. ALWAYS socks. BUT, I do have a sweater pattern floating very close to the front of my mind AND I already have the yarn for it. So, stay tuned.

That dress is adorable.

Love, love, love! And me...I'm making a whole lot of mistakes learning the piano! (But really so fun and very hard) I'm also making socks and since I've knit really nothing else for months I'm getting very tired of going round and round in such a small circle. There's got to be a sweater in my future soon! xo

Look at you go! I've only made a muslin a couple of times but when I did I used actual muslin!

I love your muslin! The contrasting neck facing, the big red buttons — tres chic! I used to made many of my clothes long ago and never made a muslin, probably because I knew how Simplicity, McCalls, and Vogue patterns fit me — I always had to cut them about an inch bigger in the hips. If I ever start sewing again, I will definitely make a muslin.

I love the muslin version--can't wait to see the linen! (linen. favorite.) I just said the other day that I need a few good summer 'day dresses.' I keep threatening to try my hand...then don't. But I love seeing what you turn out! And your smile in those pics.

That is a darling dress. Sewing frustrates me because I have such a hard time making anything that fits the way I want it to fit but when I go shopping for clothing I often come home thinking, I should get back to sewing. Maybe someday. . .

What a cute dress! I like it when the muslin comes out good enough to wear!
I sewed most of my clothing throughout high school and college, but haven't sewn garments in a couple of years, and I always make a muslin because I'm short ( 5'2") and have a full bust. I will wind up with garments that are way too big if I go by my bust size alone, so a muslin is always a good idea as well as a multi-size pattern. I've been eyeing the Hinterland pattern for some time, it really looks like a great summer dress!

Bring on ALL the sewing content - I love it! and that dress looks so fun (will you really make it in a smaller size or two? I'd love to see!)