I Blame My Mom

Last month over in Ali Edwards' One Little Word workshop, the prompt was all about letting go . . . of something. Or multiple somethings. These are the kinds of prompts that I generally roll my eyes at a little bit. (Okay. Maybe it's really the craft part of the prompt that I'm rolling my eyes at. Hard to tell.) But . . . they're also the kind of prompts that get me thinking.

Letting go.
Such easy words to say or type. So hard to put in practice!

Over the last decade+ I've had a enough life-changes thrown my way (a cancer diagnosis, empty-nesting, Tom's work changes, my mom's death, my own "retirement," the pandemic) that I've had a lot of practice with  . . .  letting things go. In fact, I've successfully let go of many, many (many) things. Ideas. Notions. Habits. Activities. Commitments. Plans.

But. There is one thing (and it's a big thing, actually) that is still hanging on. And it is time for me to Let. It. Go. 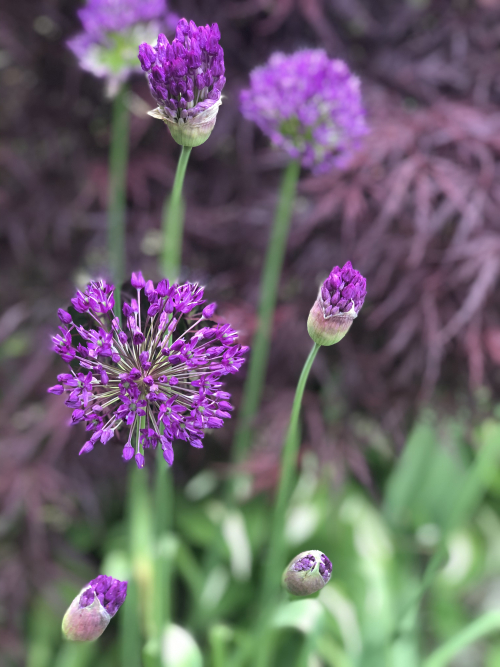 What is that thing, you ask?

And what is an Arbitrary Rule, you ask?

Well. They are rules I made up for myself. Completely made up. No one made me adopt them. (Well. Maybe my mom.) There are no "stakes" involved for these rule. And yet, for whatever reason, my arbitrary rules are Strong and Powerful. I follow my arbitrary rules To. The. Letter. I stick to my rules, damnit!

Can you give us an example, you ask?

Sure! Here's my favorite, all-time paralyzing arbitrary rule: "You can't have fun until your work is done." (Variations on this theme include "No dessert until you eat your vegetables" and "No TV until your homework is finished.")

And, yes. Those are totally things my mom said when I was a kid. I'm not saying she was wrong. There are times when you need to buckle down and get the hard stuff done before you do the fun stuff! And there are times when you can use the fun stuff as a reward for getting through the hard stuff. But . . . carrying that arbitrary rule forward and making it a lifestyle choice? Not so good.

I mean, my mom? She was trying to instill a strong work ethic in my growing heart and soul. She was helping me learn to set priorities, and make sure I became a responsible adult who would understand the importance of getting the unpleasant-but-necessary stuff of life . . . done. And it worked. I did become a responsible citizen of the world, able to meet deadlines and make unpleasant choices and take care of the urgent tasks of life.

But there is a way to take that rule . . . too far. To give it power it does not deserve. To turn a good rule-of-thumb-for-living into a hard-and-fast arbitrary rule. The issue? It's when you substitute the word "should" for the word "work."

Is this stupid-thinking?
Oh, YES.

But my all-powerful arbitrary rule tells me . . . I can't do the "fun stuff" until I do the "work." Even when the work is really just a should. (This rule bites me in the butt so often I can't even believe it.)

And that's not the only arbitrary rule I have. There are so many others:
Make sure you know what you're doing before you begin.
Don't start a project if you won't be able to finish it.
Don't make a mess on the dining room table.
Always finish what you start.
Clear your plate.
Don't bite off more than you can chew.

Sure. These rules make sense in some contexts. And I know my mom didn't mean any harm in knocking them into my head. (Trust me. She lived with plenty of her own arbitrary rules  . . . ) But there you go! Deep-seated, completely arbitrary rules that have the power to paralyze me. And it's time for them to go!

So.
In the spirit of Ali Edwards' One Little Word prompt, I'm working on letting go of my arbitrary rules.

Step one . . .  is naming them and figuring out what they are (which was much harder than you might think).

Step two . . .  is giving myself permission to ban them from my life! (I started by making visible reminder cards I can stick on my bulletin boards.) 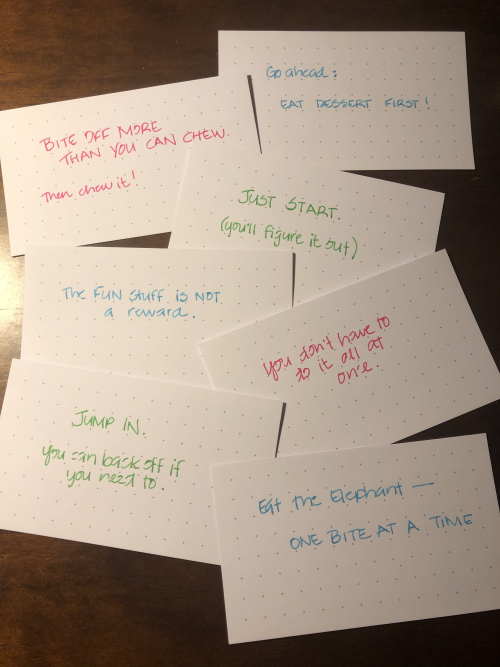 I'll keep you posted! But early signs are good. Figuring out what holds you back is a powerful force. (How do you think I got those overalls stitched up? I definitely had to "eat dessert first" on more than one occasion.) (And that felt great!)

How about you? Got any arbitrary rules you'd like to get rid of???

Kym- this is wonderful! I’ve said it before and I’m sayin’ it again: you should write (and illustrate!) a book. Thanks for the wisdom.

I think I've been pretty good at this... it's why housework has always at the bottom of my list! Haha.

Like Vicki I'm pretty loosey goosey with the rules. But there are those "Saturday rules" something productive before sitting on my duff! This is great and I wish you the best because it's a fun way to live!

Like Vicki and Patty, I'm pretty good at this. I didn't used to be (just ask Fletch who would go nuts when I started to clean...now I don't clean very much). I like your colorful reminders too. Best of luck in going against your rules - you can do it!!

When you described not allowing yourself to do the fun stuff until the work is done, you described what I do all the time and at the end of the day I often find I've done nothing...not the fun stuff or the work. I have a lot to learn from this. In my case only part of the blame falls on my mother and grandmothers, I think they did a better job than I have at balancing work and fun. I have always been just so driven throughout school, during my career, and even in retirement. I have a lot to learn in this area for sure! Here's to breaking silly rules!

"So I pick up my phone and scroll through Instagram instead."

I love this post so much. And also your mom. I definitely have arbitrary rules (one of the weirder ones is that you can't eat popcorn at the movie theater until the movie actually starts). And I have the one about no play until the work is done. I've actually tried to let that one go and it's rough. I find myself unable to enjoy the play when I know that the dishwasher needs to be emptied or the clothes need to be put away. Dale is very good at rewarding himself frequently and it makes me nuts because I just can't.

Brilliant rules! If I waited until I could finish something, I would never start anything. Wait. Maybe that is an arbitrary rule clunking around in my head. It would explain my current anxiety about starting things.

Arbitrary rules…I have several already mentioned - in particular no fun til the work is done. We have another one that is just silly but it stands…if you are turning up the volumes on the tv, it has to move in increments of 5. So 15, 20 or 25, but not 18 or 22. Rules started by the youngest in the house that seems to stick.

One thing I let go of a couple of years ago (and has gotten much easier during the pandemic, because I'm always home) is that Laundry Must All Be Done Over the Weekend. I don't know why I had this arbitrary rule; I guess at some point weekends were the only time I had the time to do laundry. But I own my own washer and dryer and don't have to wait my turn or rush to get a load out like I did when I was in a dorm or an apartment. I can do laundry any time I want or need to! There's still some laundry I do over the weekend (like the sheets and towels, because that's when we typically change them out), but I've stopped spending my weekends constantly going up and down the stairs with a basket and folding. It's so freeing!

My arbitrary rule has more to do with trying to control others who might be helping me....especially dh and ds. They both are pretty good about doing household chores, but there are a few that I always wanted done "my way". It took a long time for me to let go of the "my way" thing and just let them pick up the slack in the household chores.

The realization came about when my son was in high school and I asked him to do some chore. Then apparently I stepped into crazy mom role. He looked at me and said: "You can tell me what to do. You can tell me how to do it. You can tell me when to do it. Pick two." That sounded eminently reasonable to me and I stepped away. It still runs through my head when I ask dh for help with something. It's my task request editor.

When he got engaged, it was a family story shared with his fiance', who stared open mouthed at the dynamic. They are now married. I think that saying is still working for him ;)

Sometimes the arbitrary rules help me feel grounded. and sometimes they can be constricting. I like to follow those that help with the former and it's a real trick to abandon the others. I love your note cards! (pray tell, where did you get dot-grid cards??!!)

I am nodding to so many of the comments here! (and your post just hit me right between the eyes... sigh)