Stepping Away from the Edge
Home Archives Profile Subscribe
Just Under the Surface
Blasting You With Poetry: Week 5

The Big Hang Up

Let's get back to my green overalls, shall we? Because they've been essentially finished for a couple of weeks now.
But not technically finished.
And certainly not wearable yet. 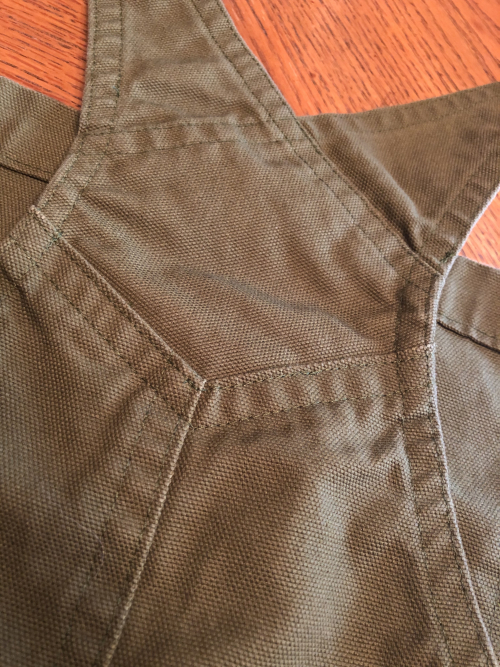 What's the Big Hang Up, you ask?

Well. I can tell you it wasn't attempting a complicated, British pattern (written in English, sure, but I'm just gonna say that British-English and American-English are not the same, and there are slight - but key - differences in phrasing and nomenclature when it comes to sewing instructions). 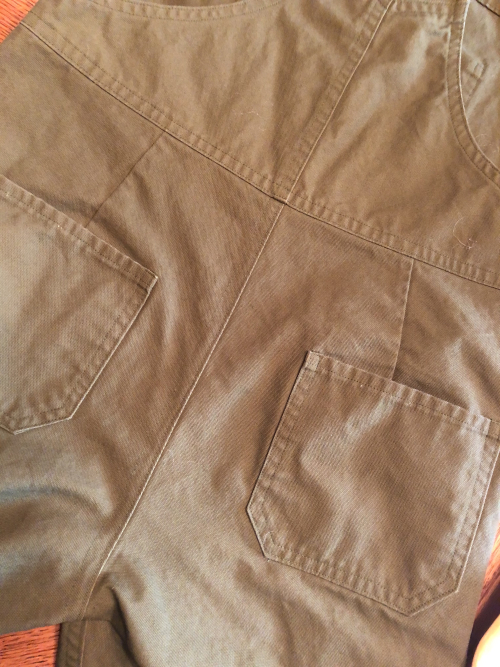 It wasn't the fact that I slipped up with my seam ripper and made a little slice in the bibs. (After running them through 4 or 5 wash/dry cycles to soften up the canvas, I actually like the "weathered" look that little slice gives the bib. Not even gonna mend it.) 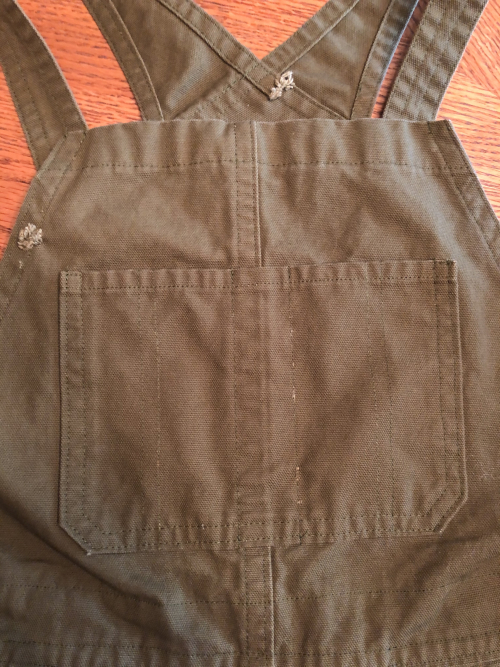 It wasn't the buttonholes. (I did have to rip one, because it was wonky. But I'm fine with ripping/re-doing buttonholes.) What WAS the big hang up in getting these things finished?

It was the hardware. The damn jeans buttons!

You know . . . the ones with the rivets on the back? The ones you need to hammer into place?

I've never installed jeans buttons before . . .  and they freaked me (the hell) out. I almost chickened out and just used sew-on buttons. But, shoot. I'd gone full-on authentic with this particular pair of overalls, and damnit . . . I wanted the authentic buttons!

So I watched YouTube video after YouTube video about installing jeans buttons. It looked easy. But. . . each of them talked about the importance of using some sort of heavy iron base to do the pounding. A cast iron skillet would be fine, they all said. But I don't have one. So I stewed and hemmed and hawed . . . and finally broke down and purchased a little mini-anvil (about $10 from Amazon). 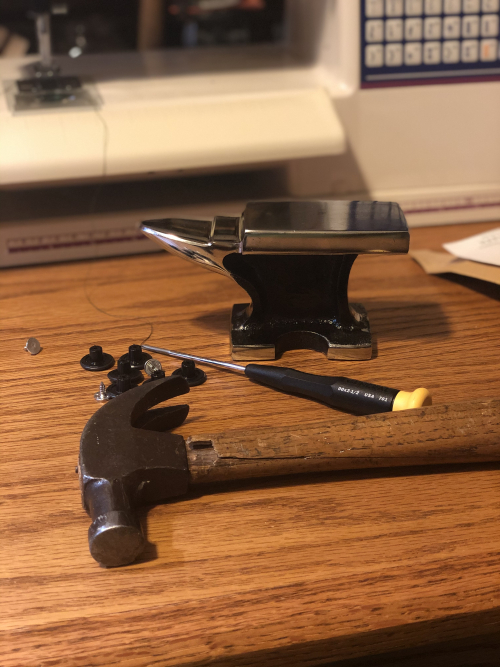 (It looks like it belongs in the scene from The Grand Budapest Hotel . . . where they use tiny tools to dig themselves out of prison!) 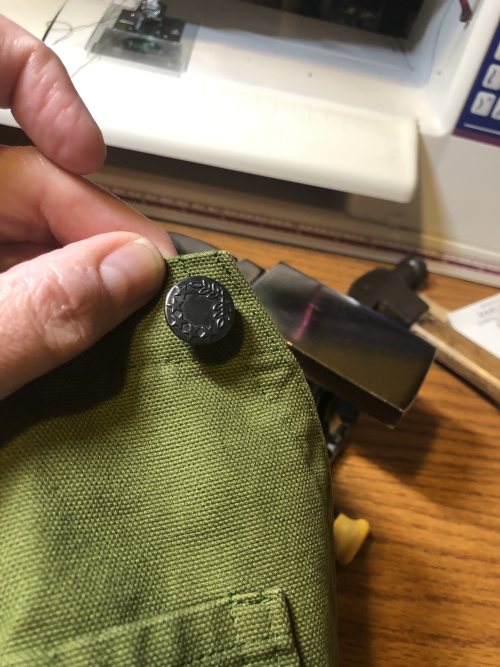 And right out of the gates, too. It really is as simple as the YouTube videos make out . . . to install those damn jeans buttons. Especially when you can pound away - safely and securely - on an iron base. (Satisfying, too. There's just something very cathartic about hammering the shit out of something, y'know?) 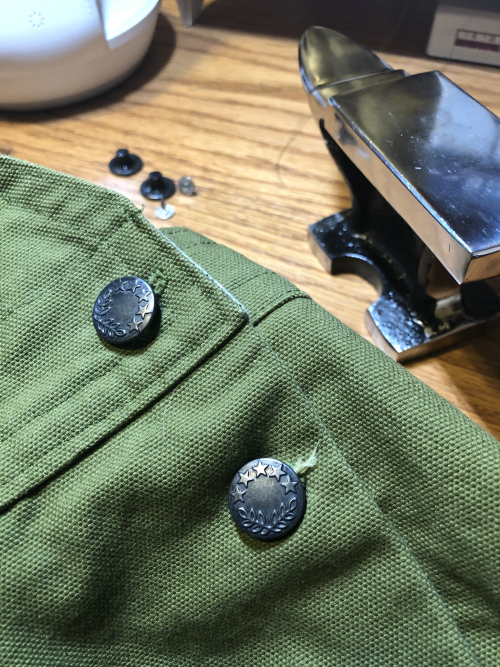 In no time at all, I had installed all six jeans buttons, and figured out the slide/fastener for the straps! 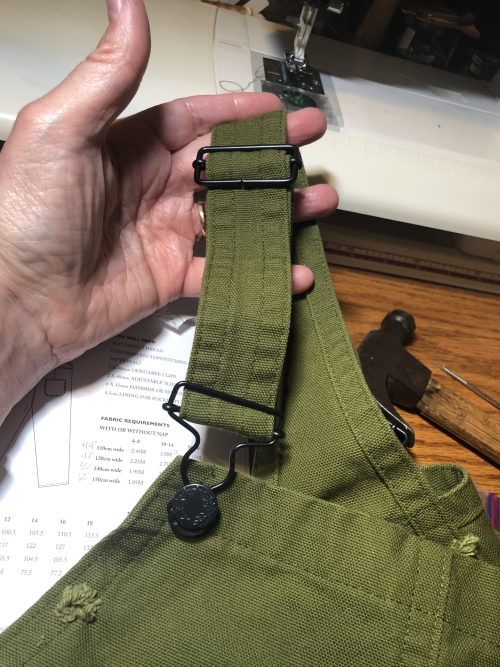 They're Just What I Wanted!

And when Tom gets home (he's up north, opening our cabin and discovering that we need a new water heater), I'll have him take some pictures of me and I'll show you the full glory of these overalls soon.

Note: My overalls are actually the shade of green in the last photo. They are a perfect Mr. Green Jeans shade of green. Kind of spring-y, but not super bright.

Your overalls look so professionally sewn, and that mini anvil is so darn cute! After executing all the details of a British pattern, topstitching, and buttonholes so beautifully, I'm glad you went with authentic hardware. Congratulations on your Perfect Green Overalls!

Love those bibs! They look perfect. And they'll be perfect for working in your beautiful gardens. I used to make them for my granddaughters in girlie prints and buy a Gymboree top to go with them. But I always had to use my husband's full-sized anvil in the garage to set the buttons, so I was quite surprised to see your tiny version. Seems you can find whatever your heart desires online. How did we ever live without it?

I think I want a mini anvil and I have no future in hammering buttons! :-) Such an accomplishment Kym...I know you will wear them well!

Now that is amazing! They look fantastic! I’ll bet you can’t wait to put them on and get out into the garden.

Like so many things in life, it's all about having the right tools. Good for you for purchasing that mini anvil and getting it done. I'll admit, though, I'm sort of flabbergasted that you don't have a cast iron fry pan! Can't wait for the photo shoot.

I would challenge anyone to tell the difference between your bibs and a store bought pair! I’ve been know to send a project into hibernation due to scary finishing details. Leather straps on a felted bag, scary. Glad your buttons were made easy on that cute little anvil!
I’m closing in on my second FO of 2021, a cozy lap blanket. Warm temps are sure to happen now!

The detail you put into the overalls is just beautiful. They look better than ones you could purchased in a store. They are perfect, you are going to be proud of yourself when you wear them.

They're just beautiful! I love the color and the buttons are perfect. I used to make all my own clothes when I was in high school, back in the seventies ha! You are inspiring me to dig out my sewing machine and try a little project or two.

yay you! (and how did we ever even think we could manage without YouTube and Amazon?) I really love that little spot of fraying on the bib, too - it almost looks like the fibers felted thanks to the washing and drying. can't wait to see them modeled (and so sorry about the water heater Up North - hope Tom doesn't find anything else!)

You DO do some amazing top stitching!

Oh Kym, these look so FAB (isn't that a phrase from the 60's??). I cannot wait to see the glamour shots of you wearing them. Congratulations on a great finish!!!

Wow! Those overalls look great. After all the time and effort, I'd say an Amazon purchase is justified. I can't wait to see them on you. P. S. I think I'm up for hammering the dickens out of something.

These are absolutely wonderful! Congratulations!

Wow. The attention to detail! You need to have a garden party where you wear those overalls over a frilly, flowery cotton blouse to give them their due! (The closest I ever came to all that top-stitching, hammering and ripping was a pair of corduroy jeans which included a - gulp - zipper. I took a bow, wore them proudly, then reverted immediately to a Very Easy Very Vogue simple shift-style dress which is how I lived out my sewing career.) You are amazing!

I am so, so impressed! I can't wait to see them on you! I do want to learn to sew my own clothes one day, and I am filing away in the back of my mind the fact that you can buy a miniature anvil. Who knew?

Go you! (and who the hell knew that Amazon sold small anvils??? Genius that!) I love them! SO STINKING MUCH! (and I think they look like Mrs. Greenjeans jeans!) Bravo to you on this incredible finish!

Cannot wait to see you in these. They are perfect! You are so flippin' talented!!! Wowy-wow. Such pleasure in looking at those topstitches. You must be sky high.

WOW!!! I don't really need a mini anvil, but I WANT ONE!! Haha. Who knew?? I'm glad you didn't ruin those pretty buttons while pounding out the shit (I sure do get that!). I can't wait to see you modeling your fabulous overalls. (Bummer about the water heater, but "opening the cabin" would be the time I'd "want" to do it.)

I could fill this whole comment area with hearts! (Green, of course!)