Stepping Away from the Edge
Home Archives Profile Subscribe
MORE Birthdays, Always
Blasting You With Poetry

I talk a lot about the "stuff" I'm working on.
Projects, mostly.
Chores, sometimes.
I thought it might be fun . . . to create some sort of visual representation to show you how I'm progressing. Y'know . . . in kind of an Old School way.

Here's the sweater I've been working on for a while now. 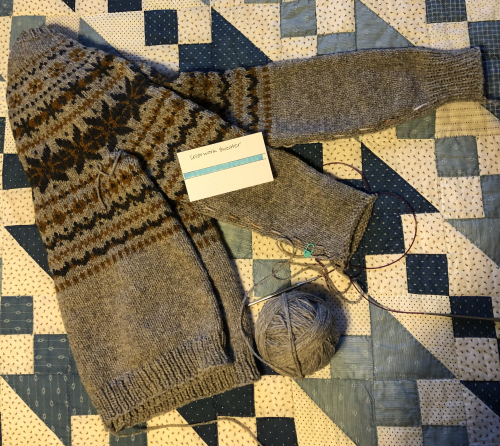 It's almost finished, as you can see by my "progress bar." (Maybe also because it's just missing a cuff.) 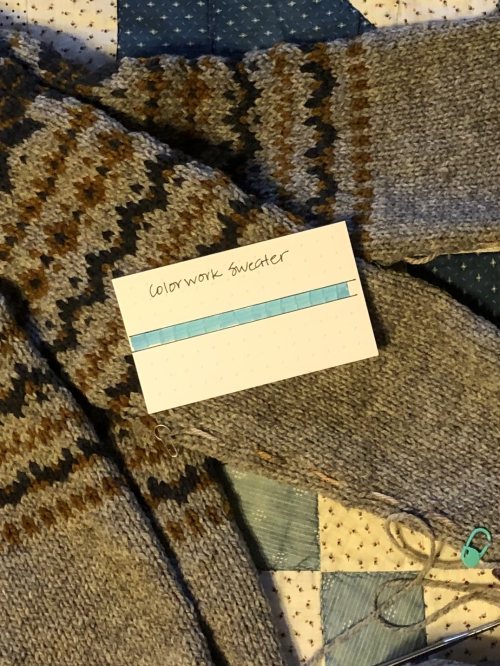 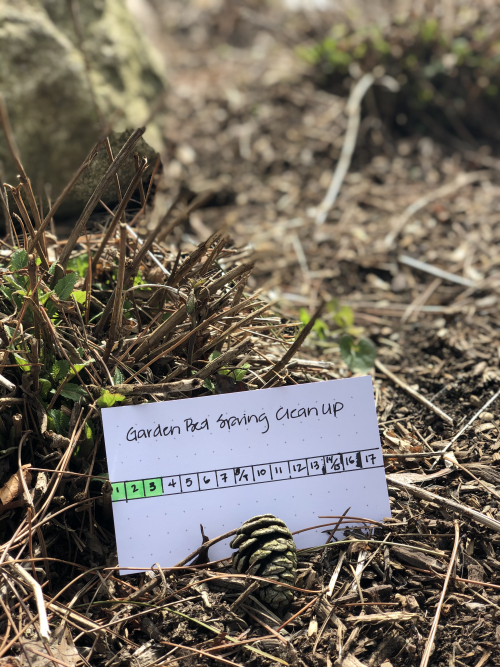 My garden is . . . a lot. (I've identified - and named - 17 "zones" in my garden.) (Maybe I'll blog about that someday.)  Anyway, I am thrilled to be able to start cleaning up my beds so early in the spring this year. It doesn't usually happen this way. (Often, at the end of March there is still snow covering my garden beds.) So. Even though my "progress bar" indicates I've barely gotten started, the fact that I HAVE already started is huge progress. (And now, even if it does snow again, at least I've begun.)

I also made a "progress bar" for my green overalls project. 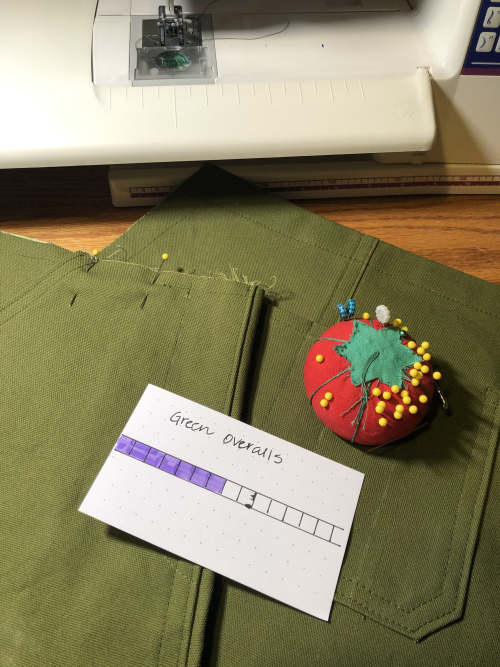 This was really heartening for me, because it feels like I've been sewing and sewing and not getting very far. But . . . the "progress bar" shows that I'm almost to the half-way point. (There are 47 steps in the pattern. Each "square" in my "progress bar" represents roughly 3 steps.) So far, I've spent a lot of time on pockets (there are 5 of them), and they are rather particular. I suspect smoother sailing from now on. (Although the way the straps join in a VERY particular way in the back could slow me down a bit. . . ) 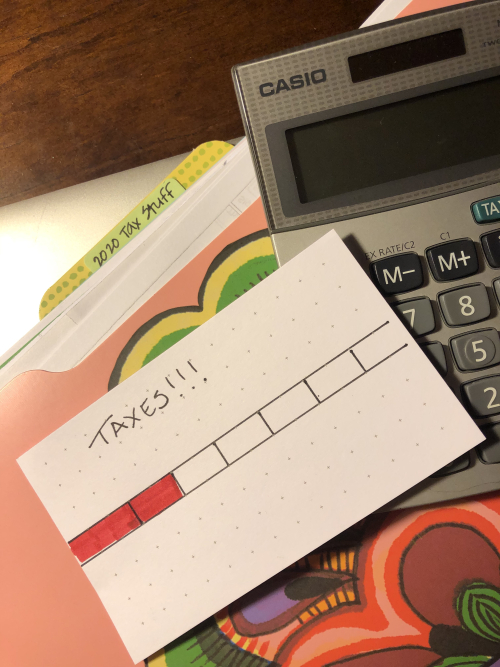 I'm chipping away! I (almost) finished a major chunk of the work yesterday (closing the books for Tom's consulting business), so I should make quicker progress now. (And, yeah. I know the filing deadline was extended. But we still have a meeting with our financial folks next week, so . . . not extended for me.) Expect that "progress bar" to be completely filled in by the weekend, though. 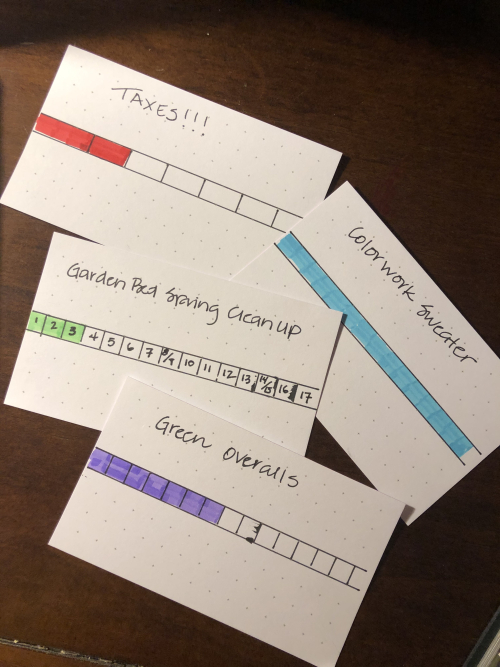 You'll perhaps notice that I don't have a "progress bar" for my spring cleaning.
(Hmmmmmmm. . .)

How about you? What projects (and chores) are you working on?

I love that progress bar idea. I have done that with sticky notes. I put a part of each task on a note, post them on my wall, and then tear them off when I am done. Very satisfying

Your progress bars are a great idea! I think coloring them in might be more satisfying than checking things off a list. My taxes bar is just about colored in, but when the deadline got extended, I fell down on the job. (Maybe this weekend.)

That progress bar! I love it! And I was so taken with that colorwork, I didn't even notice the cuff. I'm halfway through my paint facelift in our den, and I'd probably only get one bar colored in on the garden clean-up. But it's a big bar! Because we bit the bullet and picked up a Bagster at Lowes. Which means a WHOLE LOT of things that have been bugging me the past few seasons are not out of sight! (Of course, the morning after we did that, we woke to a blanket of new fallen snow. But it won't last.) And I'd love, love to read a post about those 17 zones :)

Brilliant! I've saved your spring cleaning posts for a "read". I wondering if I'll become motivated! :-)

I love how you've calculated everything to help you determined exactly how much of each progress bar to fill in! One thing I've been tracking and thinking about lately is my 21 in 2021 list. I knew I'd be able to easily check off a number of things early on in the year and that the challenge would be to keep up with it as the year goes on. I purposefully listed things that I knew I couldn't accomplish until later in the year for this reason. But there are things I can work on throughout the year, and I want to make sure I remember them. For this reason, I'm glad I decided to include that list in my monthly OLW check-in post.

What a fun way track your progress! ... and seeing that sweater SO CLOSE to being done - have you created a new card for your next project? ;-)

Those little progress cards/bars are awesome. How did you decide to break up the steps of the sweater and other projects? This would be a fun journaling exercise, I think, as I like the idea of having them all in one place. (I might lose them otherwise. LOL)

Ha! That's cute!! I could make a progress bar for my "clean the refrigerator" project.

I'm in the same boat with taxes, though I doubt I'll be wrapping up by the weekend. Unfortunately. I will NOT take it to the limit, though!

I have just dailies to do now, other than the windows. But I'm not doing the windows until after the rainy weather this week. They would be all dirt covered in an instant.

The garden is done. The spring cleaning (as it was) is done. New dishwasher. Done. Roof repaired. Done.

Not sure what is up next.

LOVE your progress cards. I'm sure they give a bit of inspiration.

I put the "PRO" in procrastinator, so I love your idea of "progress bars", it might be something that would keep me "going" on projects I get stuck on....or just leave as I become overwhelmed!

btw, l.o.v.e. your topstitching on your overalls. I have done a ton of topstitching in my day and that is some good stuff!!

Those progress cards look PERFECT for you Kym (not so much for me...too tedious in my book). But hey! Whatever works. I do love your sweater - that is downright gorgeous and I cannot wait to see it modeled. Finish that cuff and get it on!!! Our taxes are done and filed (but we don't do them ourselves anyway).

Your sweater is very beautiful. The progress cards are a nice visual and a reminder that you are making progress with some big projects. I help my husband pull some information for the taxes and then he puts it all together and fills out worksheets for the accountant. It sure works for me. I hope to get out into the back yard on Friday.

Look at those bars. I am so bad at graphs. But i love your progress bars.
We too have had some days in the60s and I've uncovered some perennials .It is horrible and dreary and cold again. But once they bud, they don't go back!! Im hopeful. And baseball starts tomorrow!!!

Okay, I laughed right out loud at the "missing" spring cleaning progress card! (I printed off a "task sheet" but have yet to cross anything off!)

I LOVE the precision of your pocket stitching! Well done YOU!! (also, that sweater... just is AMAZING!)

Cannot wait to see the sweater and the overalls! All our minds work differently. If I made a progress bar, I would be stuck on the bar and it would hinder any future progress. As with spring cleaning I need the keep my head down and focus on the end result technique. What I like about your bar is all those pretty colors! Maybe I could use that idea as an incentive for accumulating (not spending) Money! (I’ll let you know if it works).