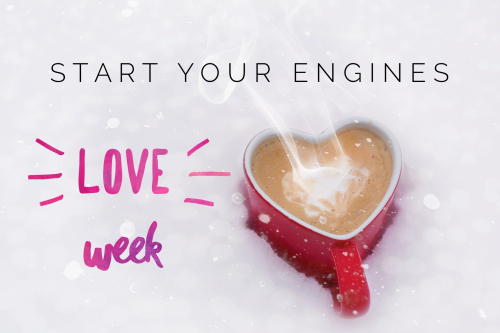 There's a well-known Margaret Atwood quote out there . . .

"The Eskimos have 52 words for snow because it is so special to them; there ought to be as many for love."
--- Margaret Atwood

Well, Margaret. There may not be 52. But the Greeks have at least 7 words for love!

Eros.
Eros (which is named after the Greek god of fertility) represents the idea of sexual passion and desire. Lust. Pleasure. Romance. Passion. It's driven by attraction and sexual longing. Think of this one as . . . falling "madly" in love; losing control, sort of . . . dangerous and fiery! The Greeks were a bit afraid of Eros love. (Too intense.)

Philia.
Philia is friendship. Loyalty. Sacrifice. Sharing. This one is deep friendship -- the kind forged through intimacy and knowing; it's a soul-mate kind of friendship. Which could be with a platonic best friend or a romantic partner. This type of love was most revered by the Greeks.

Storge.
Storge (related to Philia) is unconditional, familial love. It's the protective and kinship-based love you experience with family members. It's based on allegiance to family. You many not like your brother, but you still love him . . . it's that kind of love. Storge can also describe patriotism toward your county, or allegiance to your favorite team.

Ludus.
Ludus is that playful, flirtatious kind of love. Infatuation. A fling. Having a crush and acting on it. It's casual, sexual, exiting . . . and there are no implications of any future obligation. It's love . . . but "light."

Philautia.
Philautia is self-love. There are two faces to this one. When it's a healthy, feelin'-myself kind of love, it's all about postive self-esteem - and that's a good thing. But Philautia can also be a selfish, me-first kind of love, overly focused on pleasure or fame, highly concerned with status and what other people think. Philautia . . . can be the root of narcissism - not a good thing at all.

Pragma.
Pragma is longstanding love. It's the kind of love that's built on commitment, understanding, and long-term best interests. Think . . . mature, realistic love commonly found in long-established couples. Maybe it started as Eros, rooted in romantic feelings and passion . . . but, over the years, it morphed into Pragma as a couple grows to honor, respect, and cherish each other, accepting differences and able to compromise.

Agápe.
Agápe is selfless love -- the love we extend to all people, whether close to us or distant strangers. ("Agápe" was translated into Latin as "caritas," which is the origin of our word "charity.") It's a general feeling of empathy and love toward humanity itself. It involves caring for and loving others without expecting anything in return. Agápe is the foundation of great societies, communities, and most religious traditions in the world.

The Greeks considered Philia - deep friendship - to be the most valued kind of love. Aristotle further classified Philia into three categories:

What do you think? Did the Greeks get it right?

"True love is singing Karaoke 'Under Pressure' and letting the other person sing the Freddy Mercury part."
--- Mindy Kaling

Very interesting. I love etymology. (Or is it eNtymology? I never can remember.)

It’s the first one, of course.

There's a lot to unpack here. I've busy trying to identify all the different types of love I have in my life now. What a good thing to figure out!

I wasn't aware of some of these, like storge and pragma. Interesting, and I think they got the classification of friendships right, too. Some of my most best friendships have begun in utility, but evolved into those of virtue.

I used to have a lot more "friendships of utility" but thankfully, now, I am blessed with some excellent friends that have moved from "pleasure" friends to "virtue" friends. A very good thing!

Another fun and interesting post Kym. I keep reading Storge as Storage though! LOL

I think the Greeks were definitely onto something. I think they likely realized that we don't always get along with family and we can't always choose them, but we can choose our friends.