A Scientist in the House

It's generally very nice to have a scientist in the house! They're handy to have around when you need something explained or translated, for example. They tend to keep their heads in pressure situations, being super logical and rational about most things and all. They tend to think and work very methodically and with a more even-keeled, wait-and-see approach, which keeps them from making rash decisions. Mine has the added benefit of being a human calculator, which is also incredibly convenient. (I will say that it's not all rainbows and lollipops, though. Because that wall of logic? Yeah. That can be very frustrating to knock up against. Just sayin.)

Anyway. Having a pharmaceutical scientist in the house during a pandemic has been . . . priceless.

So I'm going to share mine with you today. 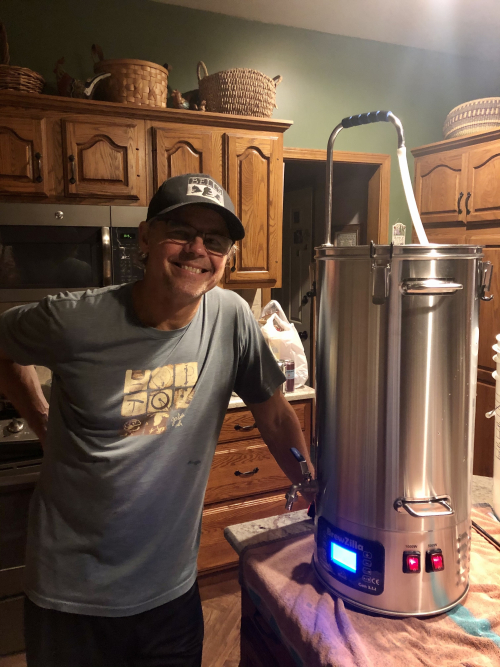 (Tom with his "Beerzilla." For science you can drink!)

With all the vaccine development news this year, Tom has been getting a lot of questions from friends and family members . . . about drug development and approval processes, about science, about trusting the vaccine. He's prepared a written response to address those questions, and I thought you might like to read it. Please know: this is an opinion piece. He's not giving medical advice here! (Not that kind of doctor.) I just thought it might be interesting for you to read what a pharmaceutical scientist has to say about the vaccine.

So. Here you go.
What my scientist has to say!

Some in my family asked to provide my view of vaccines for COVID 19. Full disclosure: I’ve never worked with “biologics” - monoclonal antibodies, peptides, or vaccines. So, vaccines are not my area of expertise. Nevertheless, I did work 29 years in big pharma in what is known as “small molecules” and that has given me some perspective on the industry as a whole. Some thoughts:

So, in a nutshell:

I hope you found Tom's words helpful! It really is nice . . . to have a scientist in the house!

Thank you, Tom! I'm not a vaccine expert, just someone who worked in science and wholeheartedly believes and trusts it, and I have had an ongoing discussion with a family member, trying to provide them with some facts. I'm continually amazed at how few people seem to be able to understand and evaluate risk-reward. This family member wants a vaccine that is "completely safe" before she will think about getting it, but can't grasp that even Tylenol or aspirin can have some unwanted side effects. I'm going to send her a link to today's post because I think Tom's information may help answer some of their questions.

Thank you so much for sharing your scientist with us today!! Very informative, and worthy of a bookmark.

Well done, Kym (and Tom) - thank you!! I was a little disappointed to find out just how far back in the line Marc and I are (probably keeping good company with folks like y'all!)

Even with all my health challenges, I am pretty far back in line for the vaccine. But, the minute my number is called I'm getting right up in line and baring my arm.

I've taken all the other vaccines recommended and never had a problem other than expected "side effects". At my age and with my comobidities, I'll take my chances with the vaccine. The risk/benefit is hopefully on my side.

Thank you, Kym, for sharing Tom's thoughts with us today. I already knew he was in favor of this vaccine but it's really nice to read the reasons why as well. I said to someone yesterday, if they walked in the door of the library right now with the vaccine I would roll up my sleeve and get it! Like you and Tom, I'm in the 3 group of roll outs for this but a few in my family will be among the secone group and I'm so glad for that!

What an awesome team you two are. Thank you for this! Tom's 'risk-reward' perspective is exactly what I've been wanting to hear more about--from a scientist. So very helpful. (And, Kym, I love your perspective on living with a scientist!)

Thank you Kym and Tom!! Growing up in a science house I trust science (and scientists) as well. I'm amazed that so many of my workers in the field (hourly employees in healthcare facilities) will most likely balk at having the vaccine (though when hospitals mandate it, they may get it...or lose their job). I'm over 65 and have some health issues as does my husband, but I think we are still pretty far down the list.

Thank-you Kym and Tom! I'll qualify for the vaccine at the same time as you do and I will stand up and say yes please!

I, too, am farther down the list for receiving the vaccine, but plan to once it's offered. Since I'm already pro-vaccine, my favorite part of Tom's essay is his argument for believing science. How personal bias doesn't get much of a toe-hold and, even if it initially does, will eventually be over-ruled. Thank you! I know several people I'd like to forward it to.

Thank you Tom for this wonderful explanation! I am planning to get the vaccine as soon as it is available for my age group ( over 65 ). However both my husband and I are healthy and will probably not get it until the spring according to our governor. Until then its the mask, hand washing and keeping a low profile in the larger world. Thanks Kym for this wonderful post.

Thank you both! Thoughtful and reasonable (and along the lines of my thoughts already). And reassuring!

Thank you Kym & Tom! I'm over 65 and in good health, so it looks like I'm somewhere in the middle of the pack on the line for the vaccine.
I have degrees in biology and nursing and I have a difficult time understanding how so many people in our nation distrust science and believe wild conspiracy theories over science. It really makes me worry about the future!

Thanks to you and Tom for posting this. I've been frustrated by the weird reception science has had through this crisis. On the one hand, there's been a disdain for science, on the other, a weird expectation that scientists know things completely and (it seems) by magic. The latter evidenced by many complaints about the experts "changing their minds." Which is kind of how it works. We had an unknown virus. People shared the best knowledge and guesses, based on previous knowledge. And then they learned more and things changed.

Off my soapbox -- not a scientist, but married to one for over 30 years. It was fun to see my future daughter-in-law's posts this week - she works at Pfizer (thought not directly on the vaccine) and is so happy with the results of the vaccine trials.

I am not in the least a scientist but share Tom's optimism about the vaccine, and I am reassured by his confidence. I know many people are skeptical simply because of the speed of the development, but science has advanced so much in recent years. I live in the city where Salk's polio vaccine was developed and first administered, so we are big on vaccines here!

Thank you so much Kym and Tom! Tom’s response is, as I expected, clear and well-considered. I appreciate that extra amount of detail of why he trusts the pharmaceutical companies considering the shortened time frame and all the pressure. It has led a lot of us to worry which is why you probably asked for Tom’s thoughts in the first place. I trust Tom. And now also the drug companies for their grace under pressure, as it were. My one nagging thought is how can we trust that the proper extremely cold and precise temperature can be maintained once the drug is out of Pfizer’s (et al) hands and is at the distribution sites. Makes me want the one by Moderno (sp?).

Thank you Kym and Tom! I am a healthcare provider and am asked about the vaccine daily. It's great to hear from a others who understand the risk-reward equation. The vaccine will not kill thousands daily!