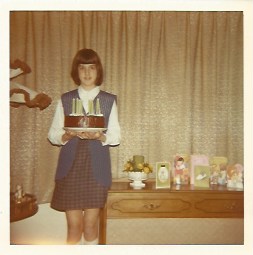 Here I am on my birthday . . . sporting a "me-made" flannel skirt and unfortunate bangs. (And I swear, our house was not as drab as that photo would indicate.) A lot of things were changing and happening in 1971, including my family's move from northern Illinois . . . to Cheyenne, Wyoming. It was an interesting time to be 12, and on the leading edge of adolescence.

I actually remember the first time I heard the song. I was at a 4-H meeting (my 4-H club was called Flour Power) and we had the TV on while we all sewed together. Helen Reddy had just been thrust into the spotlight with the release of "I Am Woman" -- a song so earth-shattering that it made the national news! Anyway, I - along with all the other Flour Power girls - stopped our stitching to watch and listen. We were entranced! We'd never heard such a powerful song before, and it spoke to us immediately.

It became an anthem, of course. A Power Song for women -- and especially for a 12-year-old on the cusp of growing up in a world that was changing fast. I still hum the song to myself whenever I feel empowered . . . or feel like I need to draw on my own strength.

So.
Thanks, Helen Reddy.
For singing out in 1971.
And for giving a 12-year-old with bad bangs and sad knee socks a theme song.

I am woman.
Hear me roar!

I was 14 when Helen Reddy released this song and I have a great memory of singing it loudly with a full table of girls at lunch with the rest of the girls in the cafeteria (and the lunch ladies!) joining in. This behavior was against the rules, but they couldn't give all the girls detention. Good times!

Oh gosh! I do remember that song. 1971 is the year I graduated from High School and was going on to college. What times! Thanks for bringing back those memories. Seems strange that that was the year Tapestry (Carol King) was released as well. I did listen to that and James Taylor much more. Oh, and CCR!

I remember that song as well! :) A good mantra for us all as we VOTE HIM OUT! I think he will remember our roars for a very long time! XO

I turned 6 in 1971 and I got a tape recorder for my birthday. I had a slumber party (natch) and we all took turns singing I Am Woman into the tape record. I'm both relieved and grateful that I don't know what happened to that tape!

This is such a great tribute, Kym! did I know that you moved to WY in 1971, just like me? I was only 8 then, and didn't learn about Helen Reddy until a few years later - but I remember making a very bad recording of that song from a tape at my best friend's house :-)

Does this mean today is your birtday? I can't tell. If it is, happy birthday! If not, thanks for sharing this great memory. I remember singing it with my girl scout troop, which unfortunately did not have a great name like Flour Power.

Hiya. Catching up a little bit (slowly)... (and after last night, I just want to head back into the Northwoods)... all of your posts this week have struck one chord or another, but this one ALL THE CHORDS!! Woman! Do I remember that song... belting it out at top voice with my sisters, my girlfriends, even my mother. She was recently divorced, figuring out how best to support five kids... it had EXTRA significance and meaning.

I am wooooooooomannnnnnnnnnnnnnnnnn! My goodness my poor parents. Thanks for the great post today Kym! xo

Here's where I have to admit to my age -- I wasn't quite born yet when this song came out. But I have certainly been aware of it and its power. Interestingly, when I thought of Helen Reddy, I always thought of the song "Candle on the Water" from the movie Pete's Dragon (I suppose Disney movies made more of an impression on me than pop culture at the time). I think it's probably time to bring "I Am Woman" back as an anthem for the next generation!

Oh gosh, do I remember that song! I turned 17 that year and began my senior year in high school that fall. I remember my girlfriend and I belting out that song along with the radio as her mother drove us to the city (NYC) for a day of shopping, lunch at the Automat, and the matinee at Radio City !

She was definitely ahead of her time.

God, I love this post! And what a fantastic time to be 12.