Stepping Away from the Edge
Home Archives Profile Subscribe
Vrooom!
A Never Before

With the current State of Things, it feels like there isn't much to celebrate. But today, my friends, we have something!

Because on this day . . .
100 years ago . . .
The State of Tennessee passed the 19th Amendment to the United States Constitution, bringing the number of states passing the amendment to 36 and providing the necesary majority to ratify the amendment, which extended universal suffrage to women. So.
Something to celebrate, indeed!
(But holy moly . . . check out the cords on that electric light chandelier . . . )

Today, in "Start Your Engines" fashion, I've got some ways we can celebrate this special day together. (Starting with a quote, of course.)

"Any great change must expect opposition, because it shakes the very foundation of privilege."
--- Lucretia Mott 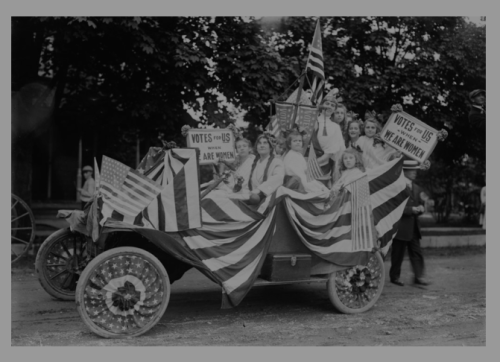 By now, I'm sure most of us are pretty familiar with the story of women's suffrage. Although I never learned the history as a child (there was never any time devoted to women's history when I was in school), I devoured biographies about the (white) movers and shakers of the women's suffrage movement and histories chronicling the process of passing the 19th amendment as I grew up. If you're interested in a quick overview, here's a quick refresher (from PBS). And here's a Women's Suffrage Timeline (from the National Women's History Museum) covering the years 1840 through 1920.

That's not the whole story.

Because passing the 19th amendment . . . didn't actually guarantee or even mean suffrage for ALL women in the U.S. For years after 1920, many women, including Native Americans and Chinese immigrants, were not able to vote. And for many others, especially African-Americans, casting a ballot was extremely difficult. Until the Civil Rights Movement of the 1960s, all women in the US did not actually enjoy the right to vote.

And . . . the stories of the movement and the history most of us are familiar with didn't include the contributions of women of color and LGBTQ women at all. It's time we rectify that and make sure we understand and know the whole story.

Celebrate today by expanding your knowledge and challenging your understanding of the story of women's suffrage in the United States.

This was my first introduction to a "suffragette" . . . 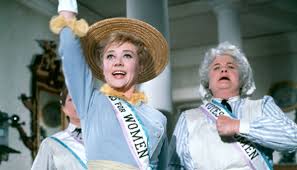 I'm sure many of you remember this scene from the Mary Poppins movie. (And, like me, you're probably already singing the song!)

Here's a little history on the term "suffragette" -- where it came from, how it evolved, and how the movement embraced the nickname. (Time Magazine)

Celebrate the 19th Amendment AND support the U.S. Postal Service by purchasing this new commemorative stamp . . . 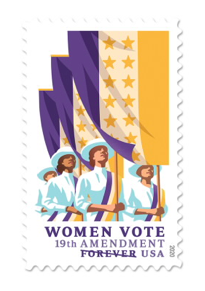 The stamps will be available beginning August 22 at your local post office OR you can pre-order online here. (Please know . . . these stamps are extremely popular right now, and they may not be available at all post offices. I pre-ordered mine online.) Yeah, this movie is about the British women's suffrage movement, but it gets the point across. It's a hard to watch, but really gives a sense of the passion, commitment, and hardships of the movement. It's available to stream on Netflix, or to rent on Prime.

You may have seen this a few years ago when it first came out, but enjoy Lady Gaga's parody of her own song, Bad Romance, now with a suffragette twist.

Celebrate today.
Votes for women!
Votes for ALL women!

Our first introductions to "suffragettes" is the same, my follow-up was the first Masterpiece Theatre series that hooked me: Shoulder To Shoulder, about the Pankhurst women!

This was great, Kym. My mother was only 2 when the 19th Amendment was ratified, but my husband's mother was 16. Wish I had thought to ask her about it way back then. Will be looking for those stamps! Chloe

I am happy to share that one of my first dramatic roles was as a suffragette in my fourth grade's production of Mary Poppins!

Although it only touches on the issues of incomplete suffrage, I can also recommend the HBO movie Iron-Jawed Angels. It focuses mainly on Alice Paul and her younger compatriots who pushed the older generation of suffragists toward the more aggressive tactics that finally succeeded in getting the vote (for white women, anyway).

This is a wonderful post! Thank you for taking the time to pull these various resources together, I appreciate it and will be sharing it with Hannah and Jessica this morning. Vacation school with Mom!

These links are just so great! Thank you! I listened to a podcast this morning in which it was clearly spelled out... men did not "give us" the right to vote, we seized it for ourselves. Well put... and I am so grateful for those suffragette sisters who made voting possible!

What a phenomenal resource you've gifted us, Kym! So much to dig in to here. Thank you--as always! This will supplement my visit to a gallery later this month. An artist friend--among dozens of others--is part of a Women's Vote installation at our local arts & humanities center. It takes up all three galleries...I'm eager to get there. (This will be my first museum/gallery visit since COVID. They're taking precautions, of course, and limits! Limits! Limits! So I think I can feel pretty good about it.)

I was so happy to see one of my favorite Mary Poppins scenes in your post! Of course :) Thanks again for a fantastic, rich post.

Mary Poppins was my introduction to suffrage, too! I've had a hard time with this "celebration" - thank you for this post that honestly recognizes, and still finds ways to celebrate, the tremendous progress we've made.

Funny isn't it that the movement kicked off in Tennessee... imagine that! So appreciate this mini but very important lesson in the annals of American History.

I agree with Honore´...it's in interesting it was Tennessee? Thank you for sharing all of this important information. I see several rabbit holes (which will be fun after being without internet for 2 days!).