Walking In My Neighborhood: A Few Oddities

It's been another week of walking here.  JoJo and I have logged another 25 miles or so.  Same streets (although our routes do vary by mood and distance).  I'm trying to approach my routes with "fresh eyes" every day, which is actually pretty easy right now -- with spring finally unfolding here.  We've got trees blooming and leaves popping and landscape projects going on all over the place.

Last Thursday, I shared three little libraries I see on my neighborhood walks with JoJo.  This week, I decided to share three other things I see on my walks:  Neighborhood Oddities!  You know . . . things you don't really expect to see in a typical, suburban kind of neighborhood. 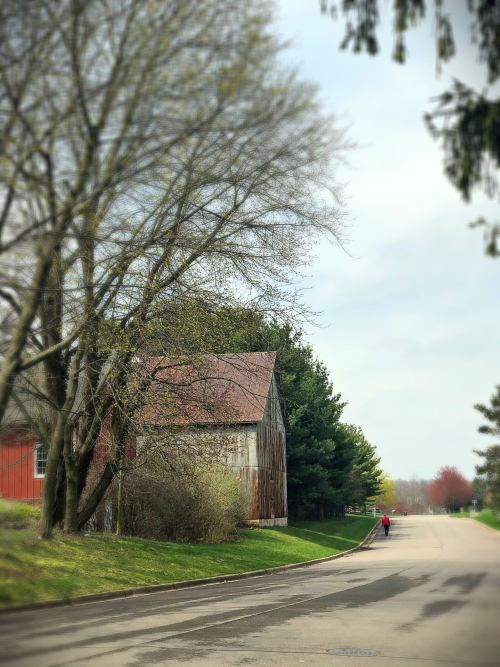 Yep.  We have a big old barn just down the block from my house.  We walk or drive past it every time we leave or return back home.  It's pretty unusual, actually, sitting there among all the neighborhood houses.  But it's also kind of cool.  Apparently, my neighborhood used to be a farm -- I think an orchard of some type.  When the farmer sold the land to developers, he got to keep his barn.  (And now we all have a cool background for family photos and senior pictures, etc.) 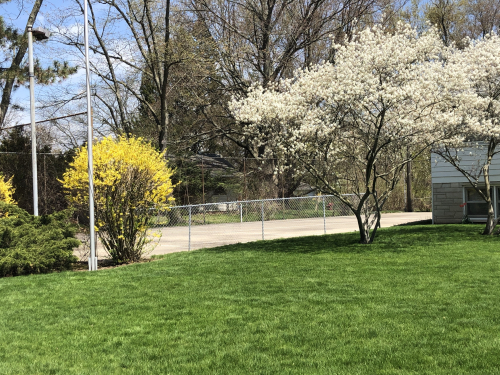 (It is so much harder than I thought it would be to take decent photos of tennis courts. . . )

There are two houses quite nearby that have their own, private tennis courts.  Full size.  Fenced.  Well maintained.  But . . . in the nearly 17 years that we've lived here, I've never seen anyone actually playing on either of these courts. 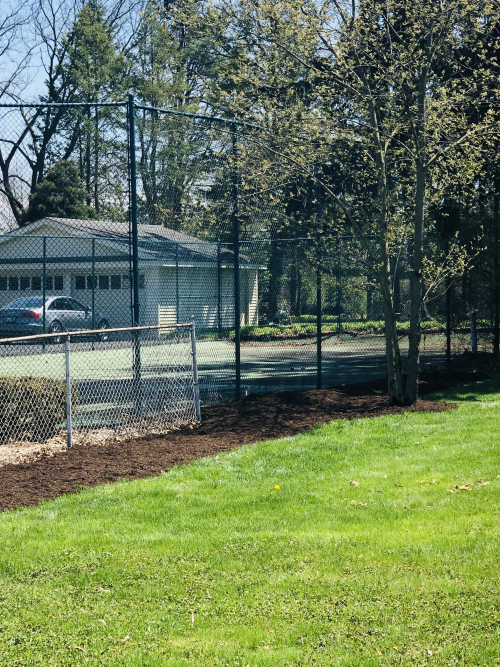 (This is the other court, just down the block from the first one.)  (Sadly, with an equally bad photograph.)

Maybe there were tennis-playing kids in these houses at one point?  I don't know.  All I know is that we have two tennis courts that are completely unused just down the street.   (I did notice yesterday that one of the courts has its net up now.  I'll be on the watch for any volleys.) 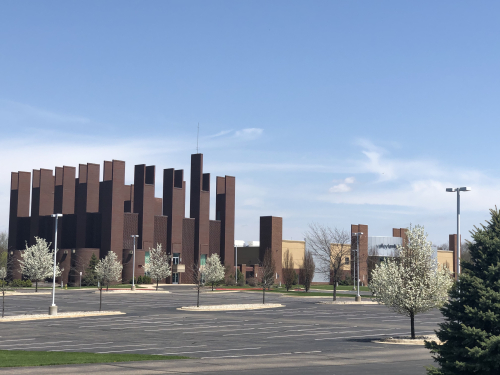 My kids always called this architectural oddity "Fort God."  It used to be a big Episcopal church -- I believe it was a "headquarters" or something.  But the church needed to sell the property and building, and a mega church bought it -- and then built that huge industrial-looking portion of the building to the right of the original "Fort God."  They also paved that giant parking lot.  It's not so bad to have a mega church as a neighbor (especially because they agreed to divert all traffic AWAY from our neighborhood streets -- and they hire local police to manage their traffic every Sunday), but . . . the grounds used to be very beautiful and park-like when the Episcopal church owned the property.  It was like having a neighborhood park, actually, as the Episcopal church shared their grounds (which included a wonderful labyrinth I used to walk).  That all changed with the mega church, though.  It's now a big parking lot -- and it's gated. (As in KEEP OUT.)

How about you?  Any oddities in YOUR neighborhood?

Hop on over to Carole's today for more Three on Thursday post.

I love that barn!
"Fort God" is the best name ever!

Recently we noticed the "new" guy two doors down has trimmed all the trees in his yard up about 8-10 feet so he can see into the woods (where nothing has happened in 33 years) and now the guy directly next to me is doing it too. Too much Walking Dead perhaps? :-)

This post fascinates me, Kym! I'd be tempted to use one of those tennis courts to let my dog run off some steam :) LOVE that barn--of course! Photo backdrop! (How handy.) And, oh, the church...that would have been a hard one to watch as it...transformed. That's always a challenge for the part of me that really prefers some 'control,' you might say. Good for you for keeping an active approach to your walking route. I find it makes a difference just to walk on the other side of the street or come from the other end of a street!

Sport courts were a big thing around here when we moved in, 32 years ago. Now I rarely see anyone using them and I am happy we didn’t give over a portion of our yard to a slab of concrete.

Love the barn! (We have one across the street from us - our neighbor Rob and his wife live in the old "farm house" and the barn (falling apart a bit) is still on the property). Growing up we knew people 2 streets over with a grass tennis court that we were allowed to use. It was wonderful. No courts around us though - just at the schools. Finally Fort God - lol. But a gated (as in keep out) church parking lot seems really, really weird to me.

These photos definitely don't look like they are from the typical residential neighborhood! Fortress was the first thing that came to my mind when I scrolled down to the Fort God photo. I enlarged it looking for a cross or something identifying it as a church and didn't see one, but at least I didn't see soldiers in the crenellations.

I am laughing out loud (very loud) at Fort God! That is just a brilliant name! (and I love that barn photo!!)

The barn is fantastic! Such a contrast to the not so pretty Fort God. What a great name for it, btw!

Very fun to have a barn! And I LOLed at Fort God. I'm sure we have some odd things out here---mostly lots of boats because a lot of fishermen live in the neighborhood.

Haha! Thank your kids for the laugh they gave me this morning - "Fort God"! :D Good for you for putting 25 miles in walking.

I remember Fort God very well but for the life of me I can't recall seeing the barn!

Fort God sounds like a perfect name. Why would they gate the grounds though? Our neighborhood is pretty boring. We do have two churches that chime the hour. Somehow they managed to cooperate and set them so one chimes seconds before the hour and the other seconds after.

I love the barn! The area of the neighborhood I grew up in is called Murdoch Farms -- because apparently a long time ago it was actual farms! The next street over from us has two huge pillars on either side of the street (like ours, the street is a dead end), so we think the street must've been some sort of estate long ago.

I might be the only oddity on my block, seeing as how my vegetable garden is in the front yard..... my neighbor has always been outraged that we would do that IN THE FRONT! Where everyone can see! ~laughing.... but really, I wanted to share that your walks have inspired me to create another oddity in my neighborhood.... if the weather allows I will be installing a little free library in my front yard as well. Won't my neighbor be appalled?? ~grinning

You have quite the oddities in your neighborhood. I really love the barn!

Your neighborhood has a lot more interest than mine does for sure! Plenty of covenants means very little difference ... so Marc and I mostly spend our time admiring the various landscape ideas ... perennials vs. annuals. shade vs. sun. and lately spotting magnolia blossoms!