Stepping Away from the Edge
Home Archives Profile Subscribe
It's Monday!
Flatten the Curve

Tales From the Voting Booth

By the time you read this blog post, I will be making my debut as an election worker in today's Michigan Presidential primary election. 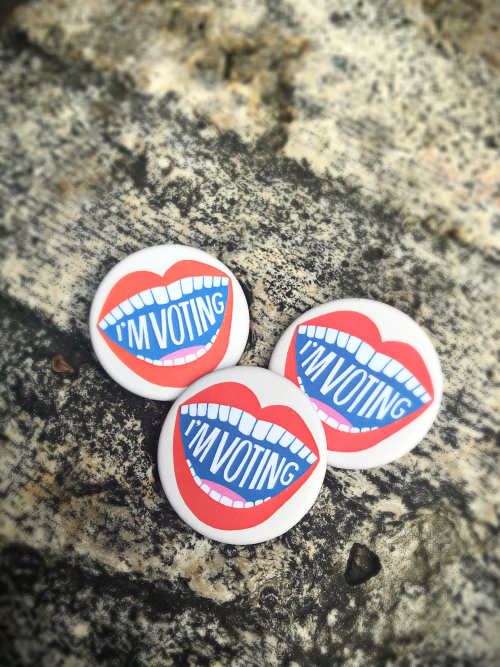 In honor of the day, I thought I'd share a story of my most memorable voting experience . . .

Picture this . . . November 1992.  Clinton vs. Bush, Sr.  At the time, I had two very young children (Erin was a chatty 3-year-old and Brian was about 8 months old) and no babysitter, so it was off to the polls for all three of us!  I voted in a library just a couple of blocks from our house back then, and since it was a really lovely fall day, I decided to walk.  I put Erin in the stroller, and stuck Brian in a baby backpack carrier and off we went!

I thought I had made a mistake when I got to the library and saw the long line of voters wrapped around the side of the building, but I was sure it would move quickly.  (And besides, what else was I going to do?) Erin chatted with all the people in line, happily (and repeatedly) telling everyone (in my very Republican community*) that we were at the library to vote for Mr. Clinton.  The line moved along.  People were generally jovial.

And then I noticed . . . a very strong smell.  Brian had been very quiet back there in his baby backpack.  And you probably can guess what that meant.  Erin was quick to shout out to all our new friends in line (in case they had otherwise missed it), "Ewwww.  Baby poop!"  (She even plugged her little nose.)  (She always had a flair for the dramatic.)

It was then that the crowd parted . . . as people decided I should be allowed to cut to the front of the line!

I'll never forget voting that year.  With my talkative 3-year-old "helping" me, and my poor poopy-diaper-baby on my back!

How about YOU?  What was your most memorable voting experience?  Share your story here in the comments, and I'll choose 3 names (random hat drawing) for a prize:  one of those very cool Lisa Congdon voting buttons in the photo, above!

* I did not live in Kalamazoo, then . . . but in a very conservative community half-way between Grand Rapids and Holland.  (Can you guess which one, Kat?)

LOLing Kym - sending all the good wishes for a NON-poopy day today!!

Oh, my, gosh! I am dying here! (and Kym...my guess is Hudsonville aka Salad Bowl City!)

I sadly, don't have any voting tales that will top Chatty Erin, and poor Brian! It was always exciting to cast the first Democratic ballot in my poll in Holland.

AND GO YOU for working the polls today - it is so much fun and so rewarding!

That's one of the first things I'm going to sign up to do once I'm no longer working! I've no exciting voting stories but wish you great fun today!

What a great and funny story! Love those buttons, but sadly, no good voting story for me. Just happy that we all CAN vote. Hopefully we will be making a BIG difference!

I always used to take my kids with me to vote, but that also meant shepherding two curious young boys with me into the voting booth. The allure of all the buttons and lights was too much one year and Justin pushed the big "Cast Your Vote" button before I was done. It caused quite a kerfuffle in my tiny polling place and they decided there was nothing that could be done, so I didn't get to cast my vote for Clinton in 1996. (At least Justin couldn't reach the Ross Perot lever!) Hope you have an interesting day at the polls today!

I am SO proud of you for working at the polls today! Having local people step up to do this is very important and I applaud you for taking on a very long day. Great voting story, too! Hannah was 2 months old in November 1992 and I remember taking her with me to the polls for her first voting experience.

Your story is hilarious! Mine isn't quite as amusing, but I will never forget it.
The first time I voted was in the 1972 presidential election; the 26th amendment had been passed the year before giving 18 year olds the right to vote. My father took me to the county courthouse to fill out an absentee ballot because I would be away at college on Election Day. I was only 17, but since my birthday was in September, I was allowed to cast my vote. My father reminded me that my vote was mine and mine alone, it was private, no one could make me change it, and it was a great privilege. I will always remember the feeling of pride I had when I completed my ballot and I will always be grateful to my father for teaching me about the sacred importance of the right to vote.

LOVE your story. A real example of community involvement. The year I was an election judge for a supposedly routine primary, we were told to bring some pastime activity (such as a book) as there would be very few voters. I brought a book, beading supplies and guess what, knitting! I got to use all three activities but not nearly as much as was expected. It was the first year that the primaries started to become a battleground for political supremacy and business was brisker than expected. Whatever the turn out, I highly recommend volunteering. Fun and rewarding.

I love your story! I don't have one nearly so funny, but your story reminded me of the time I took my first grandchild to a Clinton rally. We lived in the Avenues and the rally was in a hanger at the airport, so my husband loaded our granddaughter on his shoulders and we walked to the rally. Later that evening I told her dad how we had spent the afternoon with his not quite 2 year old daughter. The look on her ultra-conservative daddy's face was priceless -- but he didn't say a word. I like to think Nana, Pappy, and Bill Clinton helped to form her political views today! BTW - I was born and raised in PA in a very union household and a dad who was a staunch Democrat and somehow I managed to raise 3 super conservative sons. Since my grandchildren do not share their fathers' politics, I like to tell myself they share mine!

I don't have a story, really, except for the time I voted in Cambridge, Mass. There were lots of people and things on the ballot and I had carefully filled out a 'fake' ballot to take into the voting both with me. Well, I get there and----no papers allowed in the voting booth! I was kind of shocked.

I voted this AM....number 97. One of the things I noticed: the people working the polls were a good 20 years younger than in previous elections. That's a good thing! Thanks for your volunteer service, Kym

Smith used to work for SLCounty but then they closed a bunch of polling stations (hard to get people to work the poles) and sent mail in ballets to every voter in the county. The bad thing about that is so many candidates had dropped out by Super Tuesday that most of the votes didn't count. I'm so glad your community allowed you to go to the head of the line instead of making you stand there (or leave).

I think the first presidential election I was eligible to vote in was Gore/Bush in 2000, and I was away at college, so I had to vote by absentee ballot -- which, frankly, is not all that exciting because it's a piece of paper you have to fill out and mail in early. I do remember going to a lecture with an Australian professor several weeks later and him saying "Do you have a president yet?"

I LOVE this story, Kym! And I love those Lisa Congdon buttons. So glad you shared who made them--it was my first question when I saw them :) I don't have any great voting stories, per se, but I do have vivid memories of that blue-curtained booth and what a Big Deal it felt like to be in there with my mom. So even though voting-by-mail is extremely convenient, I think sitting at the kitchen counter with a ballpoint pen lacks the mystique, the thrill, that 'Big Deal-ness' for my own kids to get them excited about voting when their time comes. My youngest loves the sticker, so I guess there's that.