As I explained on Tuesday, I'm letting my Christmas Memories journal inspire my blog posts during this busy time of year. 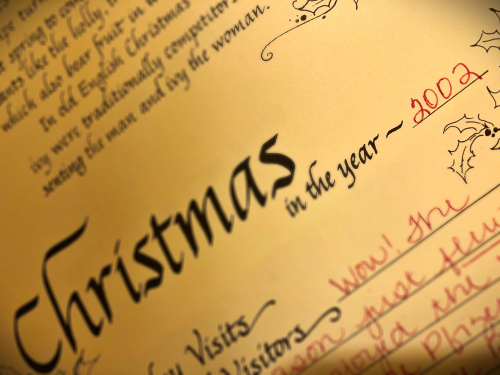 Back in 2002, Erin was 13 and in 8th grade; Brian was 10 and in 5th grade.  And they were busy, busy kiddos!  These were the days . . . when I felt like all I did was drive!  (Because, actually . . . all I did was drive.)  Erin was deep into her musical activities -- singing in several choirs (both in and outside of school), taking voice lessons and piano lessons, and had recently added both forensics and theater.  And Brian? Well . . . Brian played travel hockey. 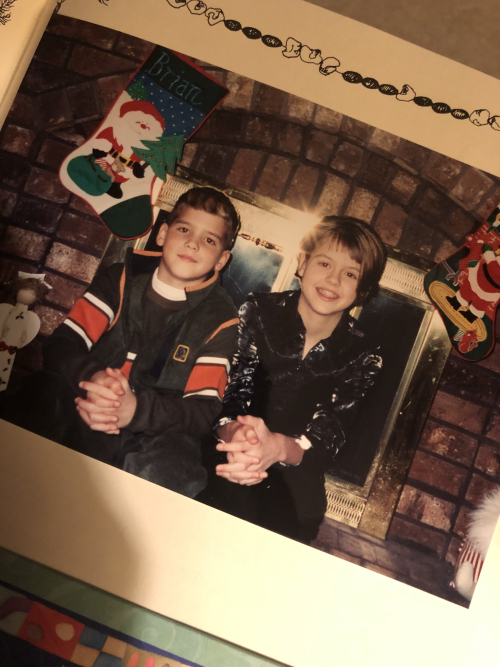 My Christmas journal entry in 2002 . . . was written by a mom exhausted by the season -- and ready for a long winter's nap!  If you've ever had a musician-kid, you know that December is just going to be filled-to-bursting with performances. And hockey . . . well, hockey is a winter sport in full-throttle by the time December comes around, with no breaks for the holidays.

It was a busy time -- but it was also a time filled with beautiful music and exciting hockey action.  These December activities -- the music and the hockey -- only intensified through the years, as the kids grew and moved on to high school.  It was just . . . our normal, family life at that time, and we fit Christmas in with the rest of it.

Back in 2002, my journal tells me that sandwiched between all the various music programs and Christmas parties and the shopping-wrapping-baking, Brian's hockey team played in two tournaments that December! 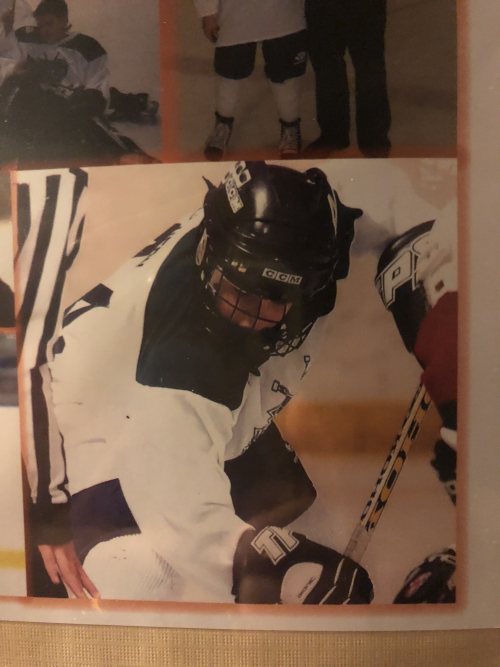 And they WON one of those tournaments! 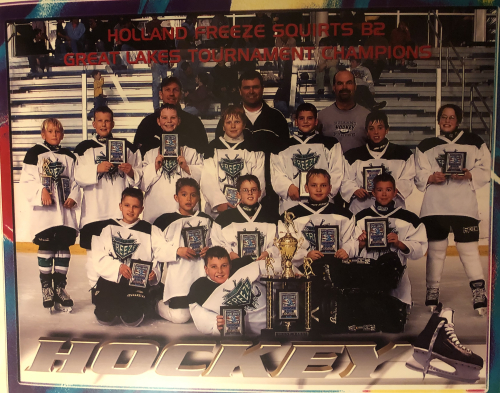 (Brian is in the back row; 3rd from the right.)

Winning games happens often enough in hockey, but winning tournaments?  Not so often.  So this was a Big Deal!  During a busy December back in 2002 . . . this was definitely a highlight moment. 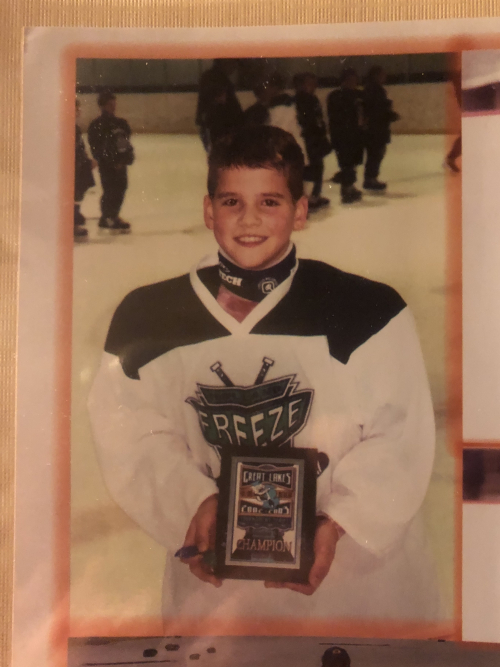 On a day like today - when I'm busy putting the final touches on our solstice party this evening, it's important for me to remember that my Decembers now - with my kids way, WAY out of the nest - are so much more . . . well . . . uneventful!  Reading those Christmas journal entries from my kids' "busy-years" are fun reminders of a crazy time in our lives, but I wonder how I had the energy!  I marvel at how I managed.  No wonder I was so tired.

So.  Solstice party tonight?  Bring it!  After bringing two busy kids through many happy Christmases, this is NOTHIN'!

I had a cello player and two clarinet players who always had packed full December concert schedules! Of course never on the same nights or in the same places, lol! Have fun with your Solstice party tonight! (it's cold enough! brrrr!)

Your Decembers must have been jam-packed full! I also wonder how I had the energy necessary during the boys' growing-up years, but it was one of the best times of our lives. (Of course, I think I say that about almost any stage in our lives!) Hope your Solstice party is wonderful!

Have a wonderful time tonight!

These look backs that you are providing are such fun. Does Brian still play hockey? And does Erin still sing? Just curious.

Have a wonderful time tonight. Happy solstice and can't wait to hear about the party!!

I think when we're in the thick of it, we're tired but keep plodding on. Later on we'll wonder how we managed.

Happy solstice party! I've decided we're doing one this year, so I have to figure out what I'm going to make.

Such great memories. And yeah, those December holiday concerts . . . I remember Hannah in those and it was lovely but sometimes they were just at the worst possible time. Have a great solstice party tonight and enjoy your friends and all those Swedish meatballs!

Have a great party!! I'm looking at one on Saturday... if I have the energy... because sometimes being grandmother of 3 can be as exhausting as mother of 3 (when their parents are whipping a fixer-upper into live-in condition & moving in little more than a week's time).

Great posts! I remember the days of working, shuffling people around and my husband singing, too! There is a reason that we have children when we do! Enjoy your evening!

Amen to everything you just said. Hope you had a happy Solstice!

You are so organized and motivated--that's how you did it (and you were younger, although I think you would handle that kind of busyness just as well today). Hope your Solstice party was a great success (I'm sure it was!). Today is Solstice and I'm planning a nice dinner and I bought a brass sun to give Smith as we have a growing sun collection on our patio. I'm thrilled the days will grow longer (albeit colder).

I'm sure your solstice party was fabulous ... and I am really enjoying these visits from Christmas past. That journal is a treasure. as is the Empty Nest ... we are enjoying ours immensely these days!

I kept a Christmas Journal (a wedding gift from a good friend) from the year we were married until about three years ago. Actually I filled the first blank book and bought a second. They liked to look at it over the years. Such good memories. I am glad I wrote them down because the holiday often went by in a blur. I hope the Solstice party was a smashing success.