Inspired to Bring It Back

Many (many) years ago, I wrote a blog post about my nativity set . . . and how I loved to put it up for the holidays.

A few years ago, I decided to . . . just leave it in its box and not set it up.  (Sometimes you just want to shake things up, y'know?)   And it has stayed in its box ever since. 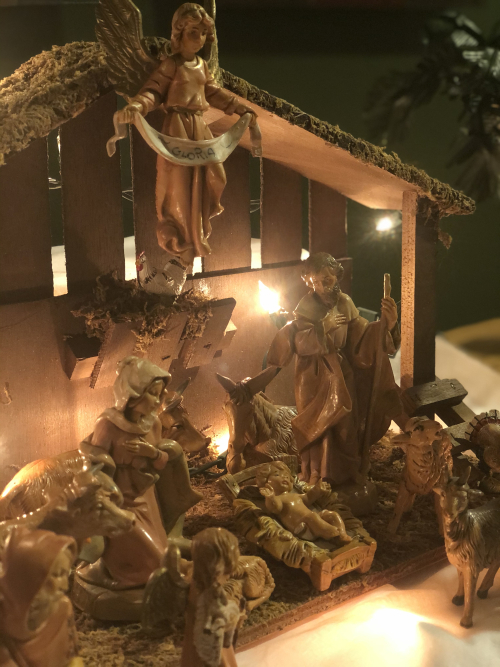 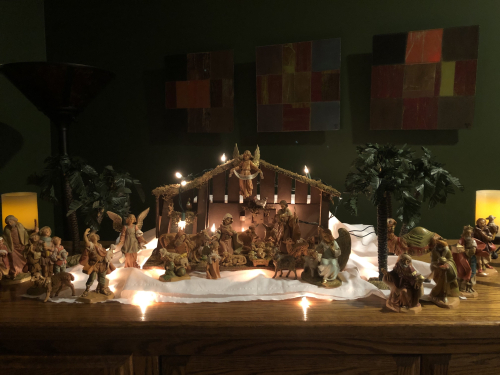 What happened?
Why did I bring it back, you ask?

Well.  I was inspired!

When I was in at the Chicago Art Institute earlier this week, we stopped in to see the Neapolitan Crèche currently on display there.  (You can see it for a limited time there each holiday season.)  It is just incredible! 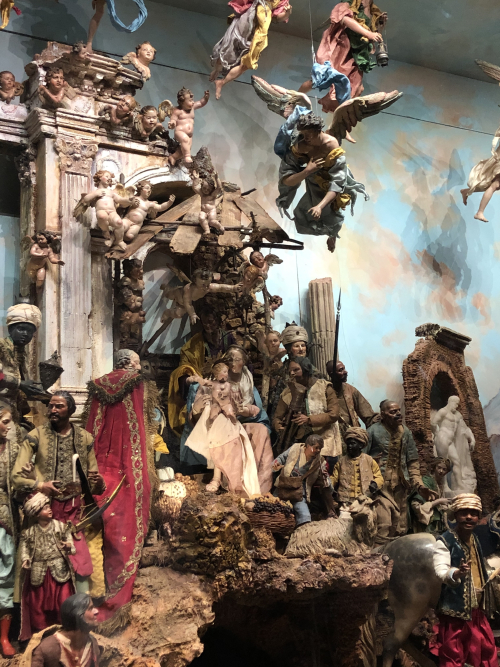 Historically, Naples, Italy is famous for creating unique and intricate crèche scenes -- depicting not only the traditional nativity scenes representing the moment when Mary and Joseph receive the Three Wise Men, the shepherds, and the angels but also the more secular world surrounding the nativity (and suggesting the general depravity of the world, apparently).

This particular Neapolitan Crèche was crafted in the mid-18th century, and features over 200 figures.  Each one is amazingly detailed with intricately detailed features and/or clothing.

There is a tavern scene off to one side (totally reminded me of the "Master of the House" scene in Les Mis . . .) which is just wonderful. 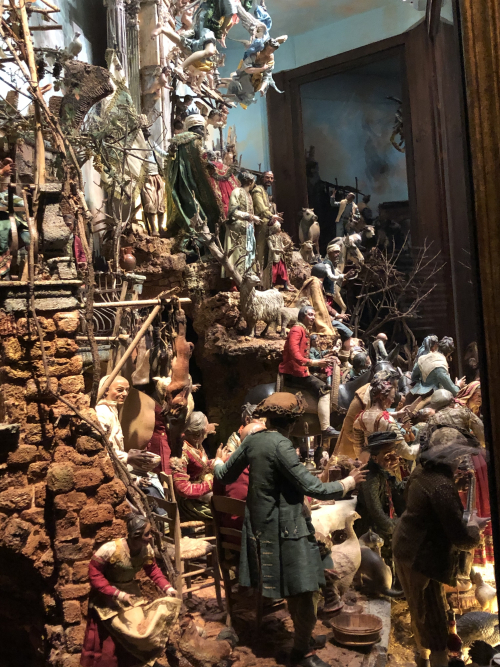 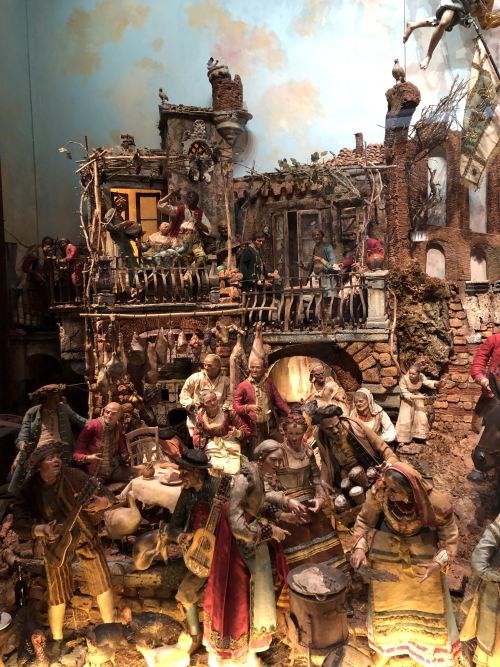 We were transfixed by the crèche, and ended up spending over a half hour just trying to take it all in.  Everywhere you looked, there was something new to discover!  The detail is just remarkable. 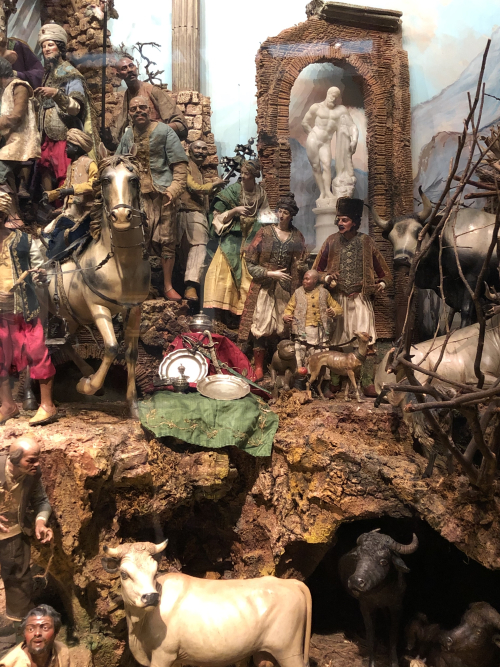 There are people doing all kinds of everyday things (there is a mother breastfeeding her infant right up front -- and a drunk sleeping it off in a dark corner, for example).  There are animals of all types and heavenly beings and all manner of food items and . . . well . . . it's just amazing.

As for scale . . . the figures are a bit bigger than Barbie-doll size, I'd say.  Probably in the 15-18 inch range?  The entire display is housed in a Baroque style cabinet.  Here's a photo - including onlookers - for scale. 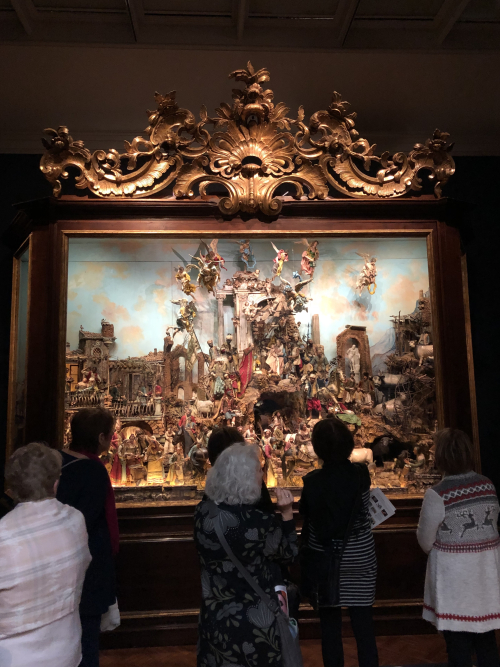 If you happen to be in Chicago this holiday season, do take the time to seek it out!  It's really worth the time and effort.  (And I know there's an even bigger Neapolitan Crèche at the Metropolitan Museum of Art in NYC, so there's another option for you.)

Now you can see why I was inspired to come home and set up my own (much smaller!) crèche.

Here is Erin's version for this holiday season -- a most inclusive, nerd-friendly crèche. 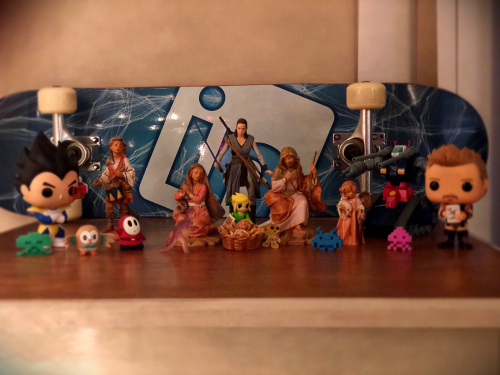 Have a great weekend everyone!

The Neapolitan Crèche is just incredible! Seeing it (or the one at the Met) is definitely on my bucket list. I set up our nativity for tradition and memories. John built the stable from a wooden clementine box, Ryan stole a "holy raccoon" that he insisted we include, and Justin always placed his plastic pterodactyl on the roof.

Oh wow! That is just amazing - I am LOVING your photos as I will not get to Chicago to view this in person!

I also love your creche!

Wow. This is beautiful. The love that was put into this. A few years ago I lost track of our annual Nativity scene - a humble version from Sears - and never realized how much my daughter treasured it until it went missing. I've been looking for Just the Right One ever since. Looks like a visit to Chicago or New York may be in order. Maybe they'll have smaller versions in their gift store.

Just went back and looked at your first Nativity post and I must say, Chiko's post really cracked me up. So true and at the same time really funny. I will have to tell my daughter.

Your nativity set is wonderful and I'm glad you were inspired to set it up again. And WOW that Neopolitan Creche is incredible!! So much detail, I can see why you would be utterly mesmerized.

I'm glad you included that last photo for scale, because I was thinking those were all life-sized figures! It must be really fun to see it in person and look for all those details.

Easy to see why you were inspired to set up your own nativity. I grew up with a similar one and I think my sister has it now. The one you saw in Chicago is stunning in its sheer number of figures doing what people do in daily life. Thank you for sharing this wonder with us.

Wow! That creche must just be amazing in person.

Ah! Your visit to Chicago rekindled many childhood memories for me ...deep sigh. Thanks for sharing.
Cheers~

oooh, thank you for sharing those amazing creche photos - what an inspiration! Erin's nativity reminds me of the Christmas pageant from Love Actually with the lobsters ;-)