It's Friday.  Let's circle back.

Remember when I told you that Tom's curling team was entering a bonspiel (that's curling lingo for tournament) as the Brews Brothers?  It was last weekend.  They got 2nd in their division (best finish EVER in a bonspiel, so yay!).  And here they are in the official team photo. 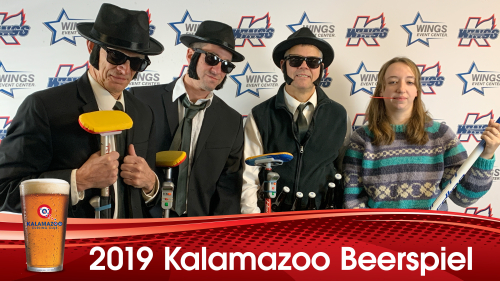 (Maya, on the far right, decided to dress for the photo as the Carrie Fisher character from the Blues Brothers movie.  She played all the games in the standard Brews Brother costume, including the sideburns, though.)

Remember when I told you I dug out the needle felting supplies from the back of my craft closet to make some little pumpkins?  I finished them! 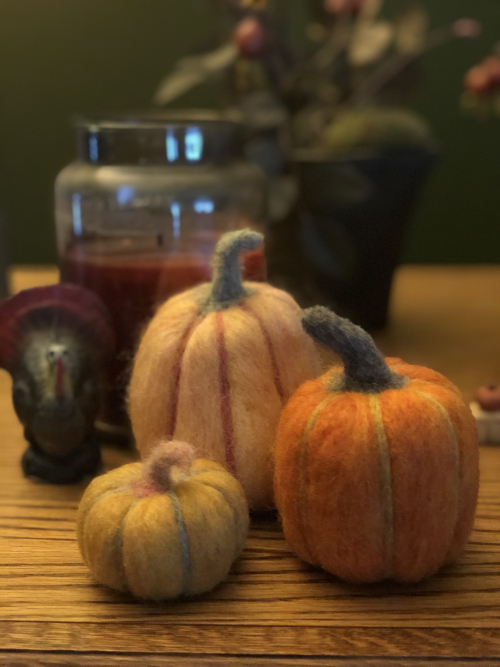 Remember when I told you about the larch tree in my garden . . . and how weird it was to see its golden glow through my living room window?  I explained it was a deciduous conifer and that it would drop its needles, leaving a rather dead-looking tree through the winter.  Well.  We're there. 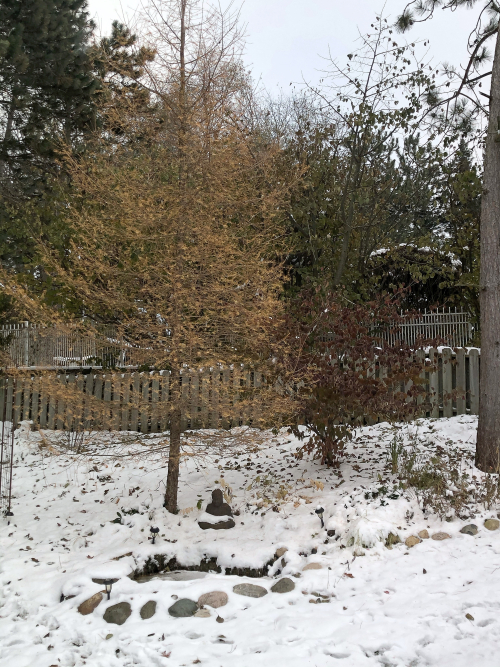 I hope you have a great weekend.
See you on Monday

I hope you have a great weekend! I've got a handsome visitor from the west for the weekend...already been to Logan and back and am sitting at my desk! Love those pumpkins!

I am laughing at that awesome Brews Brothers (and sister!!) picture! Have a great weekend!

The Brews Brothers are looking good, along with your pumpkins. Poor Garden Buddha with a lapful of cold snow under a dead-looking tree; maybe he could use a hat?

The little pumpkins turned out great! Very cute.
Congrats to Tom and his team!

Oh YAY for 2nd place for Tom & team. Their outfits are so good. Love your little pumpkins (did you see this: https://blog.createandcraft.tv/needle-felting-robin-kit/ )?? So cute. I like Bonny's idea of a hat for Garden Buddah! Have a great weekend.

Oh my gosh, how cute is that curling team???

I hope there was point when needles on the larch and snow on the ground happened at the same time!

The photo is fabulous, congrats to Tom and his team! And those little pumpkins just slay me, I love them!

Brews Brothers have got to be the best costume in the curling world! Congrats on the completed pumpkins and also on. The fabulous Shift shawl from earlier this week! Health issues are keeping us up north for the winter and I’m trying to embrace it! Just as your Buddha at the base of the evergreen is resigned snow cover and a few pine needles. Have a great weekend!

Very cute pumpkins. You did a great job.

The leaves on our trees (at least those that are left) are quite crispy now. We had our first hard freeze and now ----- crispy, wrinkled leaves.

Admittedly, I did not get the "Brews Brothers" pun when you mentioned it before, but it's a rather ingenious idea! Your garden looks so calm and peaceful no matter the season. Your pumpkins are just darling and so well formed! Happy weekend!

Have a great weekend. I love the little pumpkins.

Love seeing all those things you told us about play out ... and those curling costumes are awesome! Happy Weekend!!

The curling team photo is a riot! I guess part of being on a curling team means having a sense of humor (the video of the team putting its pants on without hands was the first clue).