. . . and other things I've learned about glaciers.
(Three things, in fact.) (Because Thursday.) 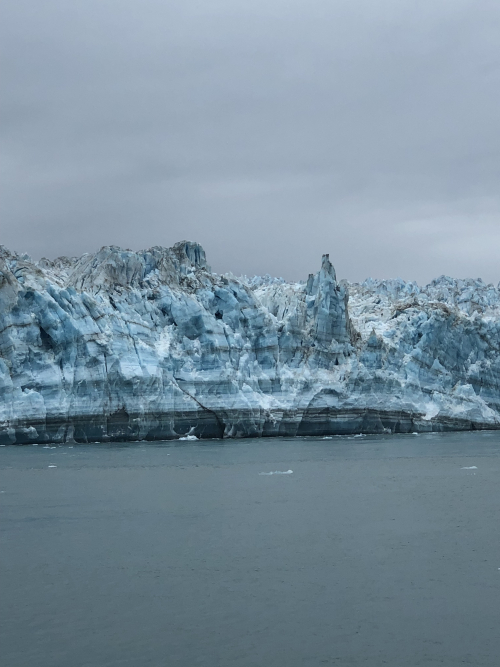 Just a tiny section of the face of the Hubbard Glacier.

When Tom and I were trying to decide just where we might want to go to commemorate our 60th birthdays, we had a lot of ideas.  Italy?  Iceland?  London?  Alaska?  So many places we want to go!  But we ended up choosing Alaska.  It seemed appropriate:  We were turning 60; Alaska was celebrating 60 years of statehood.  Although Tom has been to Alaska several times before for fishing trips, he'd always wanted to see the Inside Passage, and I've always wanted to see the glaciers (before they melt) (sad, but totally true).

So.  North to Alaska!

And we certainly did see glaciers!  Today I'll share some of our adventures -- along with three things we learned about glaciers along the way.

Thing One:   Glaciers are constantly changing.  They truly are "rivers of ice," and although they move quite slowly, they are constantly melting, advancing, receding.  (Although I learned this long ago in geology classes, SEEING it makes it so much more . . .  comprehensible.) 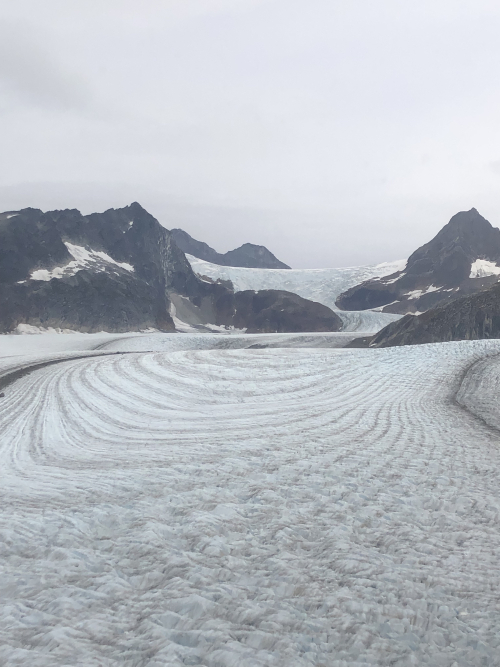 My view . . . from the cockpit of a helicopter. 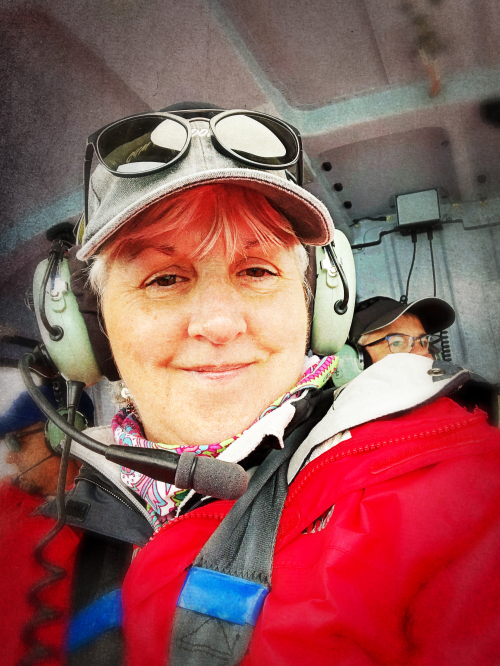 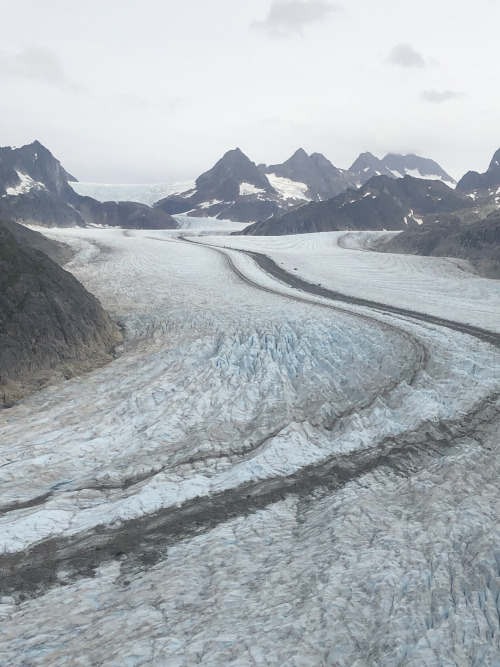 Our helicopter landed on the Mendenhall Glacier near Juneau, and we were met by a scene that looked like an Arctic expedition or something.  (Freaked out much, Kym?) 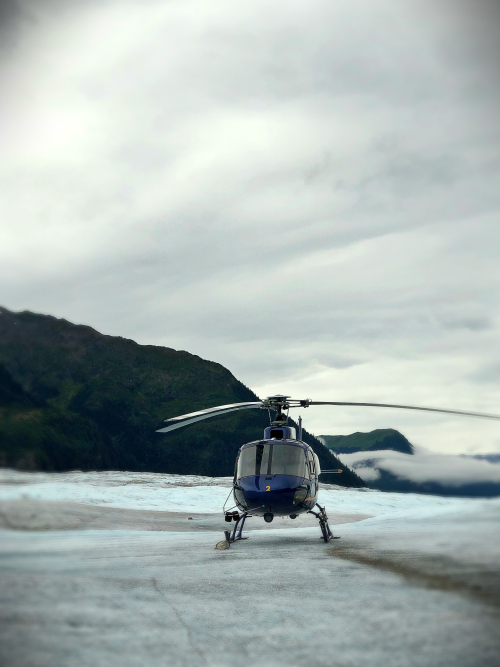 No worries, though.  By that time, I was fully outfitted for my expedition. . . including hiking gear, special boots, a helmet, extra-tough gloves, and crampons (talk about footwear I never thought I'd wear!) -- and I was on my way to pick up my ice axe when Tom took this photo. 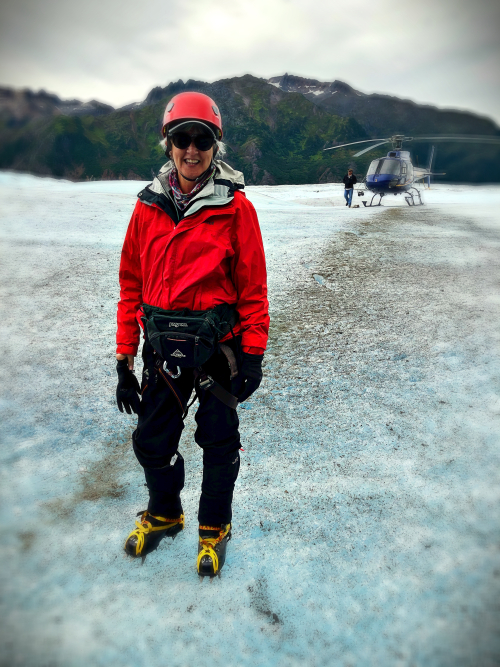 Yes, my friends!  Tom and I were about to set off for a 2-hour (guided) hike on the Mendenhall Glacier!

Thing Two:  The surface of a glacier is much like broken glass -- sharp pieces of ice of varying sizes and consistency.  The terrain varies constantly -- steep uphills, sharp drop-offs, cliffs, holes, little streams of water, canyons, caves, moulins.  The ice is actually blue, too -- because it is super dense from years of compression (like . . . we're talking hundreds, thousands of years).  The air pockets between crystals has been forced out, making the ice appear blue.  (And that's as scientific an explanation you'll get from me, folks!)

Our guide (who looked amazingly like a young and fit Yukon Cornelius) quickly taught our group of 6 how to walk, climb up, and (most freaky of all) climb down.  (If you're a skier, you have to forget EVERYTHING you ever learned about leaning into the slope and digging in your edges, because if you do that in crampons?  Not. Good.)  (And I was reminded - over and over again - of the power of muscle memory!)

And because we were a well-guided, adventurous group . . . we had a long way to come down!

But the amazing things we saw! 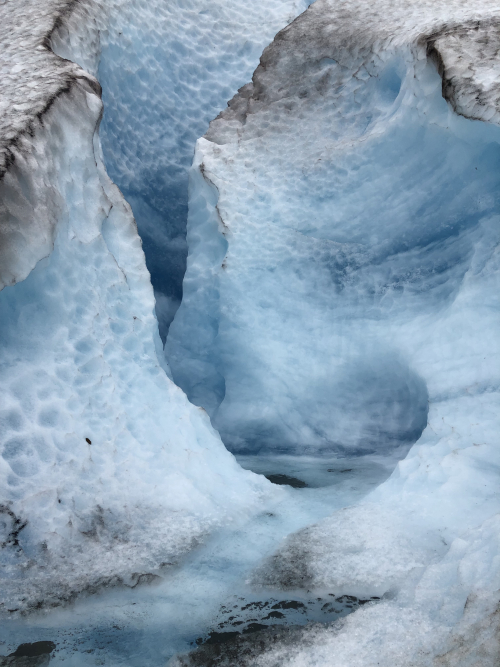 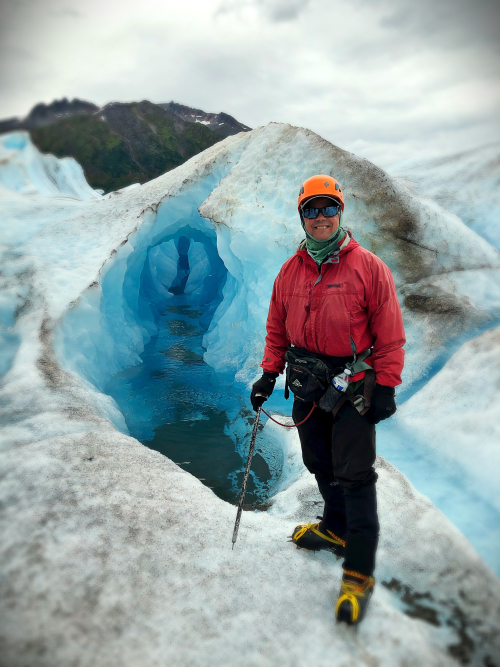 This was just an AWESOME experience.  I'm so happy to have seen a mountain glacier . . . up close and personal!

We also saw a tidewater glacier, which leads me to . . .

It's slightly unnerving to wake up to see mini-icebergs floating past your cruise ship!  But that's exactly what happened the morning we arrived in Disenchantment Bay to see the Hubbard Glacier.  (We actually got on an even smaller boat that morning, so we'd be able to get even closer to the glacier.) 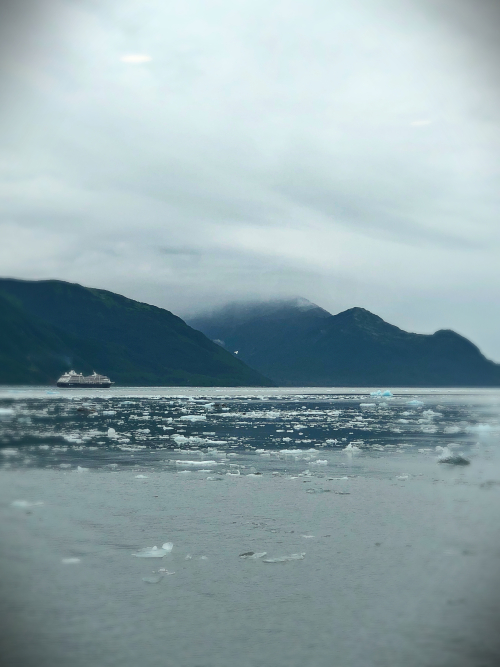 That's our cruise ship, as seen from our glacier sightseeing vessel.

It's hard to imagine how BIG this advancing, tidewater glacier really IS until you see it (or try to fit it into a photograph). 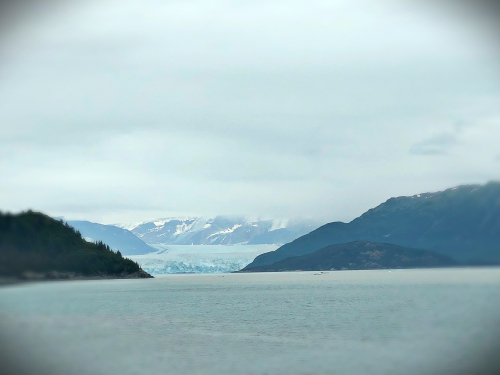 The face of the glacier is 400 feet tall (most of that is under water), and it's over 75 miles long! 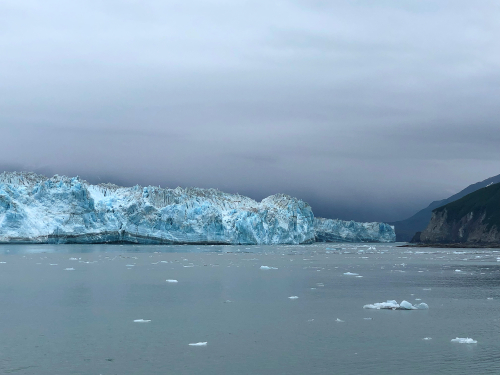 There was lots of ice in the bay -- mostly "growlers" and a few "bergy bits."  We were 1/2 mile away from the face of the glacier that day, and there was a lot of "calving" activity (when the ice breaks off from the face and crashes into the water) going on.  It was . . . Very Cool.  You can hear the loud cracking and booming thunder when the ice calves.  It's amazing!  (I'm sure there were big icebergs nearer the face).

If you look at the bottom of this photo, you can see some calving going on.  (An accidental, lucky shot -- because I didn't take many photos while we were at the glacier. ) 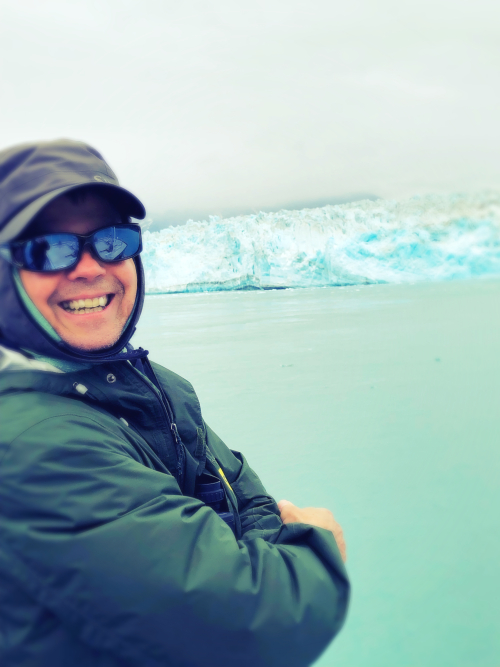 One more thing I learned?  Glaciers.  Are.  Awesome.

Wow! Just wow! The closest I have ever been to a glacier was the Columbia Icefield Parkway in Canada... your pictures are so much cooler. (Although the hike up to the Athabasca Glacier in Alberta was amazing, but still - your pictures are so.much.cooler!)

Thank you for sharing some Iceberg info with us!

So glad you did this adventure! And ALSO glad you weren't rained/fogged out. In some times of the year I think they have to cancel a ton of trips because of weather concerns.

I have to ask--when you arrived and got off the helicopter, did the helicopter leave (to get more people)? That freaked me out the MOST when we went--WHAT IF IT NEVER COMES BACK

Absolutely amazing! Glaciers and Alaska are on my someday list and these super photos (along with lots of educational info.!) have moved it up a couple notches. Thanks so much for sharing so much!

What an amazing post. What beautiful photos. I learned something about glaciers today. Thank you.

Such a good post Kym. Love all your pictures and the Facts!! This would be a dream trip for moi.

I never thought much about glaciers before...but now I will. You and Tom are kind of the cat's meow in your hiking/helicoptering/glacier-exploring gear. Love the red.

This was a clearly an amazing vacation! The photos are really incredible -- thank you for sharing them with us! (Also? "Bergy bits" is my new favorite term!)

That all sounds incredible and I'm so happy you shared it with us. Beautiful photos and great gear, of course you were well prepared - there's no bad weather, just wrong clothing - and that hike over the glacier - WOW!

Kym. This is an amazing post and your photos are wonderful. Thanks for letting us come along on this amazing adventure.

What a great trip! I must admit that I did know a lot of this already, but only because my boss at work has gone to both the Arctic and Antarctic for research, and has regaled us with tales.

So cool. I didn't know that much about glaciers before. Your photos are amazing! Thanks for sharing them. I love that blue. I especially love the last photos where it looks like there's a pea (a la The Princess and the Pea) under the ice. I wonder what would cause something like that...

So beautiful! We've been talking about doing an Alaskan cruise in the next few years. I started looking into a few options and itineraries, but then got a bit sidetracked.

A trip of a lifetime. Glad you two got to take it.

The ice formations look similar to the flowing rock formation in Southern Utah and I imagine there made much the same way. Wow, just wow to that color and the pure magnitude of the amount of ice! You took quite the hike on that glacier and I can't imagine it was easy. This was a perfectly planned and executed trip for your shared 60th year!

You look like a natural in that glacier gear!!

Exploring the earth has always been my passion. I love this article. This travel blog is so overwhelming.

Wow! So cool! We hiked to the Nisqually glacier overlook this weekend. So different -- instead of calving off into the sea, there's a very milky brown river coming from the glacier.

SO AWESOME, Kym!!! I still remember Lydia remarking on "how much science" we learned on our trip :-)