Mackinac Magic . . . And About That Dress Code

Last week, my sister and I spent a few days on Mackinac Island in northern Michigan.  Mackinac is truly a Michigan treasure.  (I have never met another Michigander who doesn't sigh and nod when you tell them you're headed to Mackinac . . . and then say, "I love that place.")  (And - just so you know - it's pronounced Mack-i-NAW.  You just ignore that "c." )  (Trust me.)

There really is something magical about the place.  Maybe it's the bridge . . . 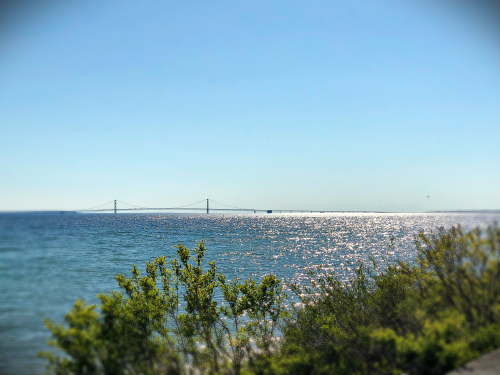 The island offers clear views of the 5-mile Mackinac Bridge joining Michigan's upper and lower peninsulas.  (You can reach the island by ferry from either peninsula.) 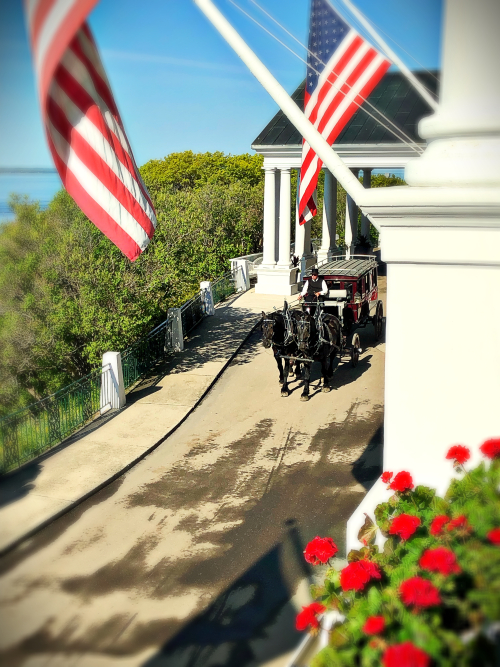 Motor vehicles are prohibited on the island.  (No cars.  No trucks.  Period.)  You walk or ride a bike -- or take a horse-drawn carriage.  Even deliveries are handled by horse drawn freight carriage.  It's very quiet, except for the clopping of horses.  (But you do have to watch where you step.) 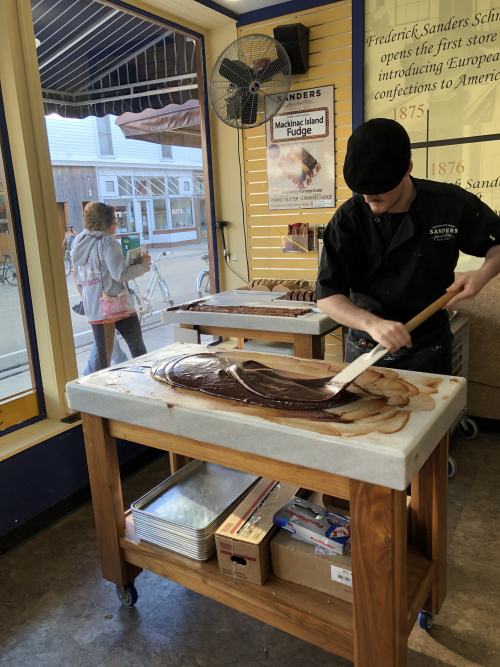 Mackinac Island is America's "fudge capital," and there are fudge shops up and down Main Street.  So. Many. Fudge. Shops.  (Seriously, you can't walk 10 steps without finding ANOTHER fudge shop.)  It's good.  It's tradition.  You visit Mackinac Island, you come home with fudge. 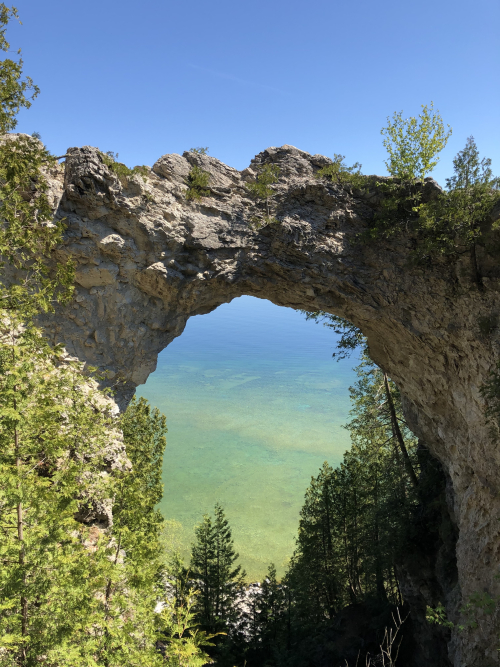 There's just something fascinating about being on an island.  And especially an island you can walk or bike around in a manageable 8.2 miles.  (My sister and I opted to walk.) 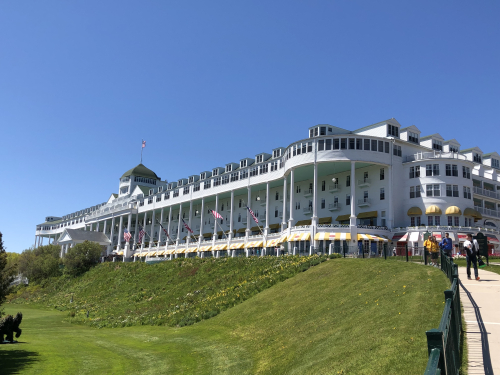 Totally living up to it's name, the historic Grand Hotel is, well. . . pretty darn grand!  We splurged by staying at the Grand Hotel for our time on Mackinac.  Here's a little peek inside: 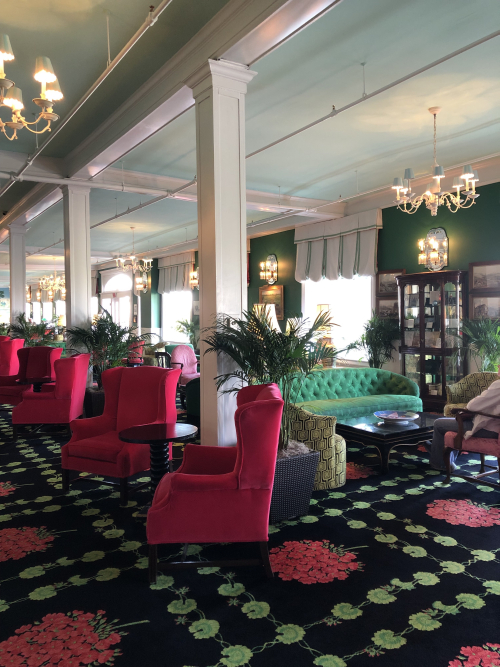 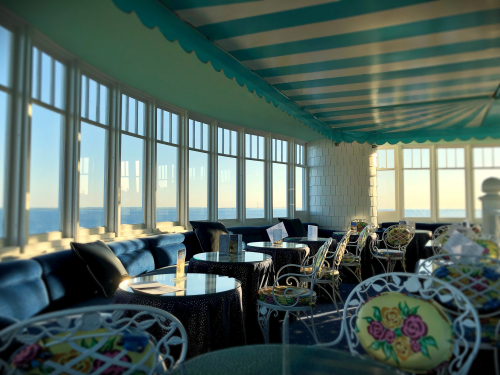 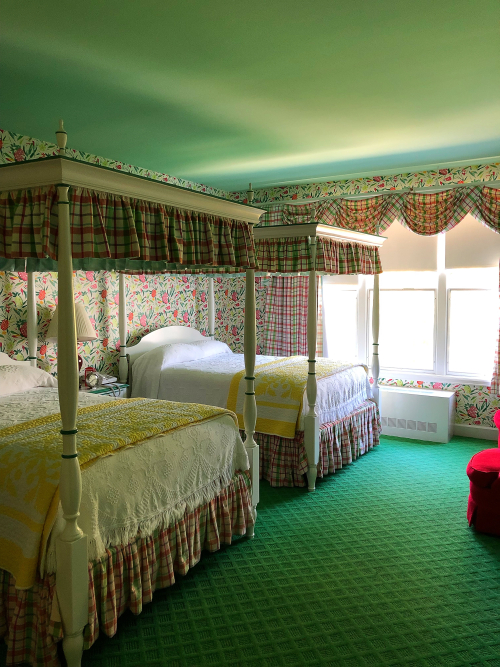 (We squealed when we saw the canopy beds.  We always wanted canopy beds when we were little girls . . . )

All VERY . . . Grand!  So in the spirit of Three on Thursday, here are Three Things About the Grand Hotel: 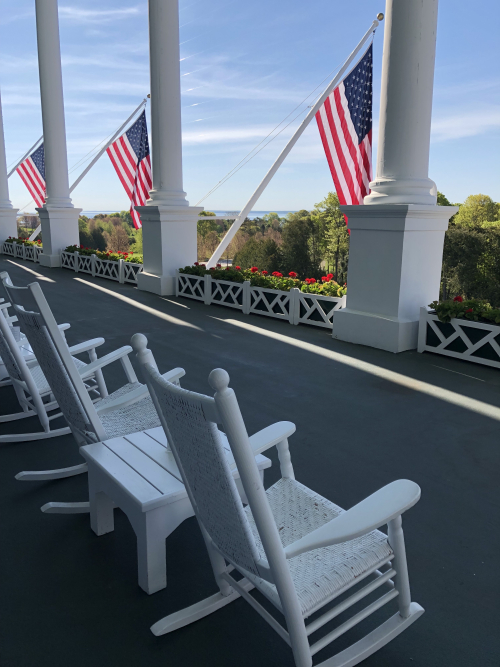 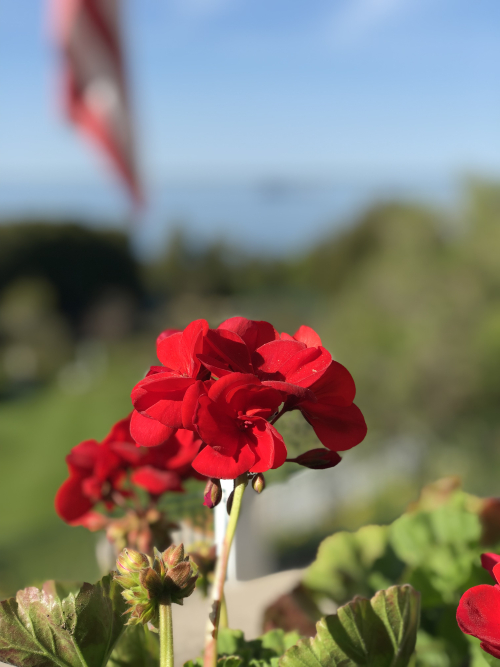 The red geranium is the official flower of the Grand Hotel -- and you find it everywhere . . . in planters, in flower boxes, on the carpets, in each room, on stationery, in the lotion and shampoo in the bathrooms.  Everywhere!  (Maybe next week I'll do a post on all the geranium carpets I found in the hotel.) 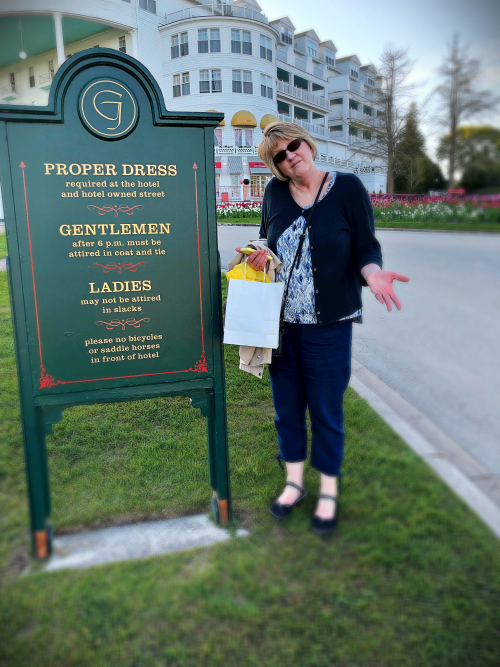 Yep.  There it is.  You must "dress" for the evening at the Grand Hotel.  Or . . . you can't eat dinner there or hang around in the main areas of the hotel after 6pm.  (You really do kind of feel like you've stepped back in time . . . with the clopping of horses and the dressing for dinner.)  It's pretentious and off-putting . . . and pretty lame.  (Because, trust me, just because you slap on a tie and wear a jacket . . . or put on a dress . . . doesn't mean you're more presentable than my sister and I in our "slacks.")  Anyway, we got around it by not eating dinner at the Grand Hotel, and then we just hung around in the Cupola Bar (which is not included in the dress code) or our room after eating dinner elsewhere on the island.  It's weird.  But I will trade the dress code nonsense for the porch any day.

So.  What do you think?  Have I sold you on the magic of Mackinac?

Be sure to head over to Carole's for more Three on Thursday posts today!

Yes! I have a friend that did research on the wildlife of Mackinac Island, but your photos are much more convincing. I NEED to sit on that porch at least once in my lifetime and explore the island. What a special place, and I thank you for sharing!

Yes, you HAVE sold me!! I remember watching Somewhere in Time oh, about a hundred years ago, and Mackinac Island has been in the back of my mind ever since. But your photos are enough to put it on my list, for sure! And I'm a huge geranium fan, so I hope you do that carpet post :) Spectacular. And you're a really good photographer!

Sigh. It is truly a magical place - every single inch of it! Thank you so much for sharing a little slice of heaven!

Yes - sold! That porch and the views are stunning.

I visited Mackinac Island a few years ago and we did not stay at the Grand Hotel, but did spend a day there. We went for the lunch buffet, which was amazing and worth every penny! We spent the rest of the day wandering around the hotel and sitting on that lovely porch. I swear I could hear that music from Somewhere in Time in the background the whole time I was there!

I've always wanted to go there and now I'm super convinced (though that dress code...I wouldn't dine in the hotel either - lol). I would love to walk around the Island - that Arch is just gorgeous. And the porch would be a wonderful place to sip and knit.

Another great island to visit is Monhegan Island off the coast of Maine. There are a few (very few) vehicles on the island, but you cannot bring your own. And, if you have no reservations at the (several) Inns, you MUST leave on the last boat to the mainland in the afternoon. We've never stayed over, but have hiked the Island 3 times.

It's beautiful! It reminds me of a combination of the Mt Washington Hotel in NH and The Red Lion Inn in Stockbridge MA although neither of those has a silly dress code. So did you know about the dress code before you went and choose to not pack a dress? Or were you surprised by it and therefore had no choice?

The dress code is a little off putting but everything else is so, well, romantic and a step back in time would be very relaxing. I think I would even wear a fancy dress just to dine (at least once) in that magical (and pretentious) place. ;-)

I'd be very happy to get some fudge and sit in a rocking chair on that lovely porch -- but I'd be pissed about that dress code! I understand them wanting to keep the "old-timey" feel of the place, but that's downright sexist.

Beautiful views but the dress code would irritate me. While it's nice that they want everyone to be presentable, I'm pretty casual in my attire and I'm also a rebel. I'd be afraid I'd wear some kind of horrible skank dress just to prove a point.

I wished I would have gone there when I lived in Chicago. I'd be ok with the dress code, honestly, if I remembered to bring a skirt. I wonder how many men get there without a tie or a shirt that accomodates a tie. I kind of like the anachronism of it and wonder how long it will last.

The Grand Hotel has been on my bucket list for a very long time! One of these days Kym! Glad you and Diane had a lovely time! xo

Your photos here and on Instagram are just so gorgeous! I've been to Mackinac once as a kid, and don't remember a whole lot, but I did like that there were no cars.

Dress codes don't really bother me. I actually kind of like the idea of going someplace on occasion where everyone isn't dressed in tank tops and shorts. But I know my opinion is in the minority. :-)

Shortly after my parents divorced, my dad borrowed his boss's Winnebago motor home and took all five of us kids (ages 6-12) on a trip around (most of) Lake Superior. It was a wonderful, very memorable trip for a bunch of reasons, not the least of which was the day spent on Mackinac Island! Rusty & I took the kids up there once, and I'd love to return again...

So glad you could have that wonderful time with your sister.

Completely and totally sold ... especially now that I know how to get buy with "slacks" :-)

It’s been many a moon (aka as 50+ years) since I was on Macinack Island...if I were going, I’d definitely enjoy the porch and more than likely, find a different place for dinner, as you did!
Thx for the vicarious trip.
Cheers~

I've stayed at Grand Hotel a few times, and I love the dress code. We don't get the chance to dress up too often, so it's a nice change of pace to look nice for a few hours. The dinner in the dining room at the hotel was incredible, and you really missed out by not enjoying it. They also have an orchestra playing after dinner. Even if you're not going to dance, it's fun to sit there and watch others while enjoying the music. I forgot my tie the first time I went, but they had ties to loan out, along with jackets.

If you go back, which everyone should stay there at least once, give it a shot. It's not terrible to dress up for a short time, and it really does enhance the atmosphere without making it feel stuffy.

when I was a kid I saw the island everyday during the summer. we lived in a home on Lake Huron. my great grandfather was a soldier at the fort. my brother was a captain on one of the ferries for years and we would go over to the island for free.
in the spring when the lilacs are blooming the island is just magical. its been 3 years since I have been to the island but I love seeing the pictures and hearing what a good time you had there with your sister.

Sold! That porch is lovely. Mackinac Island is on my husband's bucket list. We hope to get there someday.