When we bought our house (almost 16 years ago) (which is freakin' unbelievable), the owner had to give us a significant "renovation allowance" . . . because there was wallpaper EVERYWHERE.  I know it was high-end wallpaper, professionally installed and (I'm sure) very on-trend when it was first done.  In 1989.  But it wasn't me and it didn't go with my stuff and it wasn't what I wanted to look at/live in every day.

And then, there was one.  Which means -- Yes!  It's time to re-do the guest bathroom! 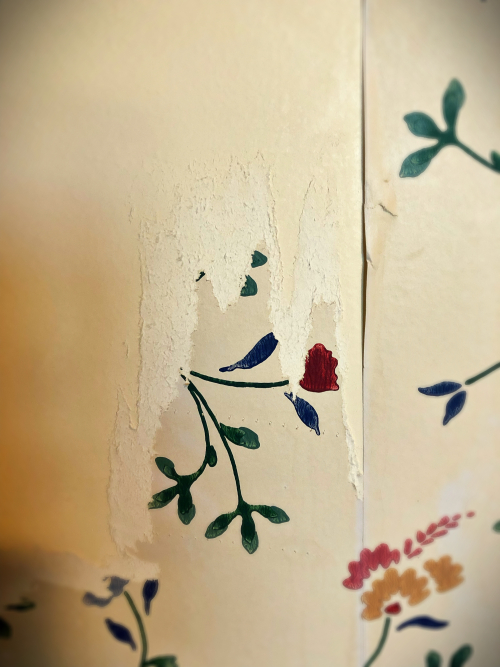 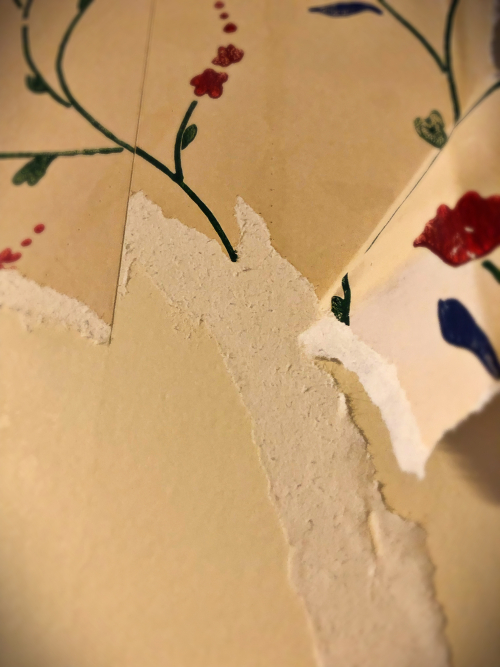 There is a lovely new sink and a new granite countertop -- but no fixtures.  (Plumber coming later today!) 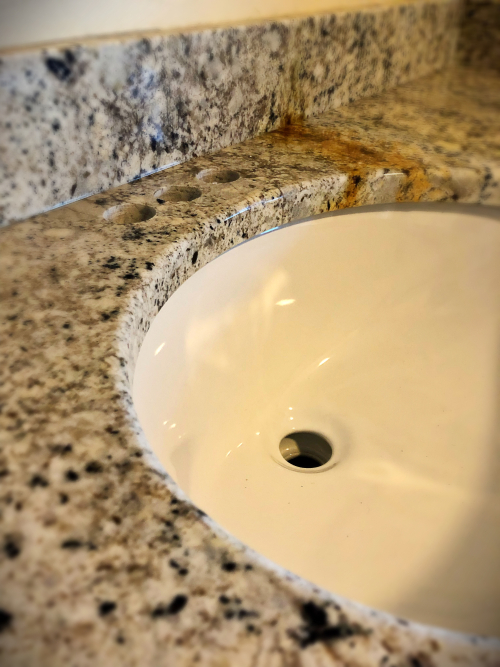 And soon, the shower fixtures will be new and up to date.  (See plumber, above.)

I still haven't decided on a paint color, but I've narrowed my choices.  And I have a little time.  (Because I still need to get the rest of the wallpaper off the walls.)

It won't be long now . . . and I'll have accomplished what I set out to do nearly 16 years ago:  Blot out the memory of all that hideous wallpaper!

I bow down to you and your mad wallpaper removal skills. That is really a job. Hopefully the room is rather small!

I lay in bed every morning anticipating pulling the wallpaper (circa 1976) off my bedroom walls. The only room that has never been addressed. You are my hero!

So I guess you can't provide any tips on how to easily remove a hideous border? I've got a border with roses on it in the kitchen in MD. It's placed high up, right next to the ceiling so I can easily ignore it, until I see the kitchen cabinet knobs with roses that match, and I'm reminded once again how I need to remove it and paint. (Maybe waiting 16 years is the answer!)

Congrats on finishing (almost) the wallpaper removal. When our house was built in 1984 I wallpapered the kitchen and living room. (Half wall). The paper is long gone and happily so but I can truly appreciate the work you did and paid out to get your house done.

Oh boy! What a job! That takes a lot of work (and a lot of patience so there are no nicks). Not something I think I could do very well at all, but congratulations to you on getting to the last room!!

Go you on all that hard work! (This qualifies as major exercise by the way, lol) Our first house in Holland was covered in wallpaper. I have memories of how long it took to strip it all from the walls - long and really unpleasant memories! I hope the remainder of that paper is soon gone and a brand new bathroom is revealed!

We have a bedroom upstairs with a single wall of awful wallpaper. I took the easy route and placed bookshelves and a cabinet with yarn that makes the wallpaper almost invisible. Now I am feeling uber lazy after reading your post and commentators!

Having seen that wallpaper and used that bathroom . . . I think hideous is too strong a word. But still, updated is good and I'm packing my bags to come see the finished product!

Wallpaper removal is only half the game. Scrubbing the walls to remove any glue before painting can be just as daunting -- at least for me. Been there, done that, and hope to never again. I salute you for your determination to see the project through. I'm sure it will be just lovely and sooooo worth it you've completed the project!

Bless your heart! There a few less pleasant, more tedious jobs that pulling off wallpaper. But you'll be so happy when it's repainted!

I've never understood the appeal of wallpaper. My mother still likes it. I'm all for paint. Must be very satisfying to pull that gross stuff off!

I wonder if any of those take-wallpaper-off-easy methods they have on the Internet ever really work... My husband removed some laughable wallpaper from a bathroom years ago. We keep telling ourselves it was "retro" until we actually got rid of it.

Oh man - wallpaper. We papered two bathrooms - back in the day and then stripped it ourselves. We hired someone to strip the paper out of a staircase and a border just below the kitchen ceiling. It is nice to get it all down and painted. Good luck with your project.

I'm a true believer in everything in its time, even if it's WAY past time by the time ITS time comes around! (Does that make sense?) Anyway, you'll have a real sense of accomplishment by the time the jobs done. How wonderful to have all the BIG jobs completed.

When we bought our house (32!!!!!! years ago), there was wallpaper in every room, too, but on only one "accent wall" in each room! Still, there was enough to remove that I invested in a steamer of my own. There was flocked (green) foil (gold) in the upstairs bathroom... that might trump your "truly gross" kids/guest bath wallpaper!! ;)