A Reminder: Focus on the WHY of It

December is so much a jumble . . . of activities and to-do lists and time-crunching.   Sometimes it just feels like too much, y'know? 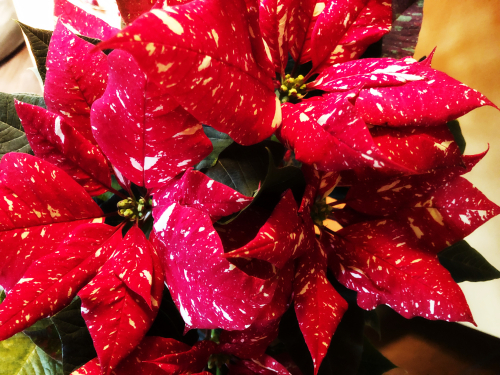 And, really, my Decembers these days . . . are nothing like they were when my kids were still at home!  First, there were those hyped-up, magical years when my kids were so very excited about Santa and what was going on in his workshop at the North Pole.  And, later, when my calendar exploded with concerts and recitals and Winter Formals and hockey games?  My, oh my.  I've got nothing to complain about now!

In fact, my December would actually be pretty low key these days.  Except for one thing.  Tom and I throw big Solstice parties in June and December.  So we've got one coming up again next week.  Big party.  Big guest list.  Big preparations.  Big fun.  And . . . Big stress!

This weekend, though, I ran into a quote that made me just kind of . . . step back and reassess.

"As we struggle with shopping lists and invitations, compounded by December's bad weather, it is good to be reminded that there are people in our lives who are worth the aggravation and people to whom we are worth the same."
--- Donald Westlake

I have no idea who you are, Donald Westlake, but your words just made me re-think everything!  Yes.  This December stuff is ridiculous and a hassle and sometimes it even wakes me up in the middle of the night.  But . . . aren't I the luckiest person in the world . . . to have people in my life who are WORTH every darn aggravation?

Love this - so perfect!! I had to Google Donald Westlake - turns out he was a write (mostly crime fiction). Definitely a quote to remember.

This made me smile. I wish I was on your list lol!

I read a lot of Donald Westlake mysteries back in the day. Not a bad writer, even though he seemed to churn out books at roughly the speed of sound.

This is great! Worth sticking on the fridge for the next couple of weeks! xo

My big thing is Christmas Eve and I have to say there were some years when I sort of resented having to throw that party. Now, though, I try to think of it like that quote and it's fun in a whole new way. Plus I don't have concerts and recitals and all that stuff anymore - thank goodness!

I do miss the endless parade of holiday activities when my girls were growing up. These days December is equally as busy but now we attend our granddaughter’s musical performance and events of our choosing. I’ve scaled back my decorating and will do a bit more next year when we downsize the big tree into two smaller trees. The quote you shared is ever so true as we gather with friends and family. Thank goodness for FaceTime so we can stay in touch with those far away!

That's a wonderful quotation and a nice reframing of All the Things that could (do!) cause stress this month. I know your party will be Merry & Bright ... and a lovely way to celebrate the coming of longer days with your friends. Enjoy It!!

I wondered if this was the same Donald Westlake that wrote a new book every other week, and based on what Kat says, it seems so! He does seem to know what he's talking about. I'm paring down the list of people and events that are worth it and enjoying them more.

I read many a book by Donald Westlake! He's a hoot! You've seen movies based on his books, too. Hot Rock (with Robert Redford) to name one. Mr Westlake is right on the money with that quote!

Oh yes! This is a very good reminder - thank you

At first I was going to write that you are a glutton for punishment, Kym, but after reading the Westlake quote I feel like the Grinch. However due to a confluence of events this Christmas season, a Solstice party of all the people we ever knew in our lifetime seems like a pleasant evening of carols around the tree. Nothing tragic, but more challenge than we want in our next three lifetimes.....so I guess there's karma for you:).

I thought that was the author Donal Westlake...another side of him I'd never'd imagined...sound words for what can be a busy, stress-ridden season. So glad it's no longer that way for me, any more!