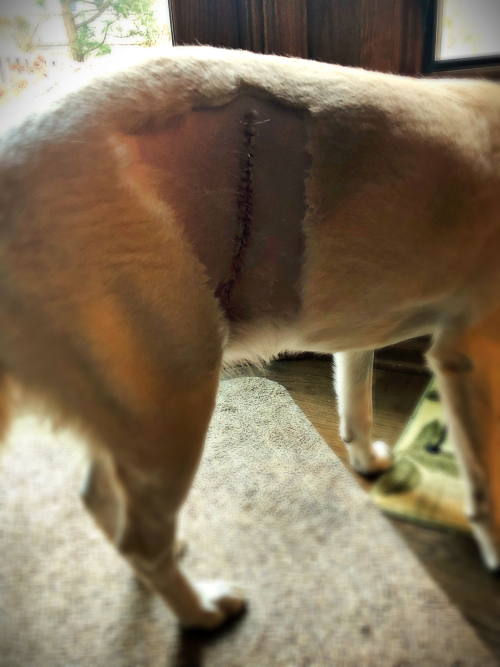 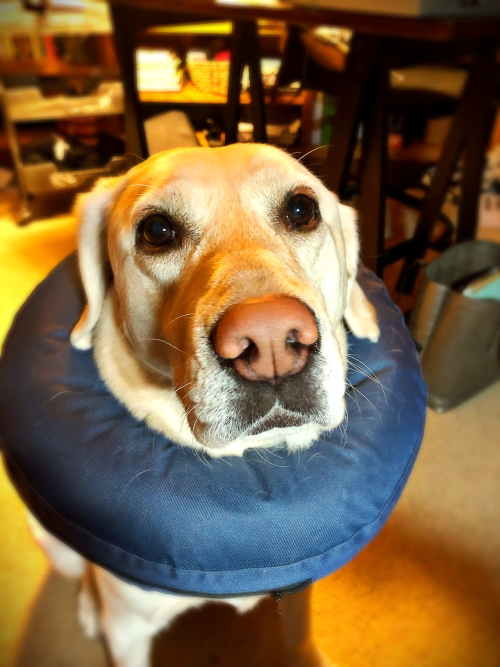 Add my Yay! to the others. (That incision is really something. Poor JoJo!)

Yippee for Jojo! I was almost afraid to read to the end of the post lest it not be such good news. You must be so relieved. The doughnut is so much more flattering than the cone. Heal well Jojo.

What good dog owners you are! Glad it has all turned out well. Are these inflatable doughnuts the new thing, or must some pets still have to go with the awful old collar? Get healed fast, Jojo!

Yay! (Tom is funny.) Booney and family send our best, a big belly rub when possible and big hints for extra Charlie treats!

Yay for JoJo! And for you and Tom! We went through that with Moxie. MANY fatty tumors and major incisions, no cancer and it all turned out well for him (and us), too. But, they are so pathetic as they just.don't.understand. Soon JoJo! Soon you'll be able to romp and play just as you wish!

1. That incision makes her a *serious* tough girl
2.Awesome collar. My dogs are jealous!
3. What a great addition to one’s gratitude list. A big breath and great thanks, right!?

Yowza, that's one hell of an incision! Poor JoJo! But I'm so glad you got good news and I hope it stays that way so that JoJo lives a good long healthy life with you and Tom. #luckypup

What a wonderful Christmas present! Her incision is amazing!! And her donut collar is too funny. What a relief you and Tom must be feeling. YAY!!!

Yay for Jo Jo! I'm always astonished that the incisions are so huge but when news is good---that's OK! Dog cancer is scary on so many levels, so much love to JoJo. Are there plans for some chemo (which dogs tolerate really, really well) or is this it?

Doggie ailments bother me more than my own ailments. It’s good to hear that JoJo’s prognosis is positive. Ben, the dachshund, also sends his good wishes for JoJo. XOXO

What good news! That is some incision...poor Jojo! I hope she heals quickly!

I'm so sorry Jojo had to go through the surgery but that's great news! Glad you found the tumor early and that she's going to be fine. Wishing her quick healing!

HOORAY! This is most excellent news! Give her a kiss from me.

Wow! What a roller coaster--so glad you got excellent news!

So glad the news is good! But the poor baby. At least he doesn't have to wear a cone.

Yay yay yay indeed! Jojo looks pretty OK with the inflatable collar (and, what a great invention). So happy for you.

Heal up quickly, Jojo!!! And, be a good girl and let your stitches heal.

Glad the news was GOOD news.

That is good news, Kym - I hope JoJo heals quickly. (thankful for all the good vets in our lives!)

I held my breath and let out a BIG DEEP sigh when I read the grand news! WAHOO! and ENJOY your weekend! Life is good!
Cheers~