Big As the Nose On Your Face

Yesterday I got a new phone.  (Very cool.)  But there was a little glitch in the setting-up . . . and I needed to "erase" and "re-pair" (not repair; just re-pair . . . as in bluetooth) my Apple Watch with my new phone.  (Not cool.)  Now, if you've read David Sedaris' newest book, Calypso, you'll be familiar with David's obsession with his FitBit and Apple Watch.  I'm just . . . slightly less obsessed with my Apple Watch.  So losing all my watch data and awards and records and all of that?  I got an eye twitch.  But only for a couple of minutes.  (It's not like I lost my contacts or my photos or anything. . . )  I'm coping.

Anyway.  Here's something fun for you to read today . . . while I play with my new phone and marvel at the facial recognition feature.

A couple of weeks ago, I went to Chicago for the SOFA exhibition.  It was an overload of cool stuff.  And pricey stuff.  And some really bizarre stuff.  (More to come.  Eventually.)

Here's my favorite thing from the exhibition . . . It's called "Truth Be Told" by artist Joan Rasmussen.

Joan, who creates her sculptures from found objects and clay, happened to be in the gallery space when I walked in, and she was happy to tell me all about the piece -- which is about 3 feet tall and designed to hang on a wall.

Joan told me that she found the little wooden cabinet first.  The cabinet has a hinged door that opens to reveal about 99 little compartments.  She knew as soon as she saw the cabinet that it would be a perfect torso, and she added the head and limbs to form a clown.

Inside the cabinet, Joan crafted a small "tablet" to fit into each compartment.  Each little tablet has a . . . lie . . . written on it.  Properly attributed to its teller, of course. 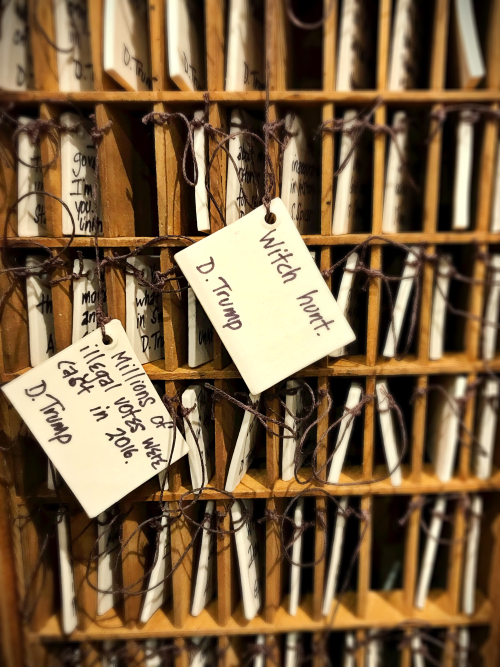 Each tablet is attached to the cabinet, so you can easily fit them back in place, or you can let them rest on the shelf, or dangle from the compartments.

Joan encouraged me to explore all the lies.  While most of them were political in nature (and certainly represent Joan's response to the current state of affairs), some were more innocuous . . . about Santa Claus or the Tooth Fairy, for example.  And the last tablet in the cabinet?

A quote from Pinocchio, of course!

Best of all?  The clown is holding a counter in his hand. 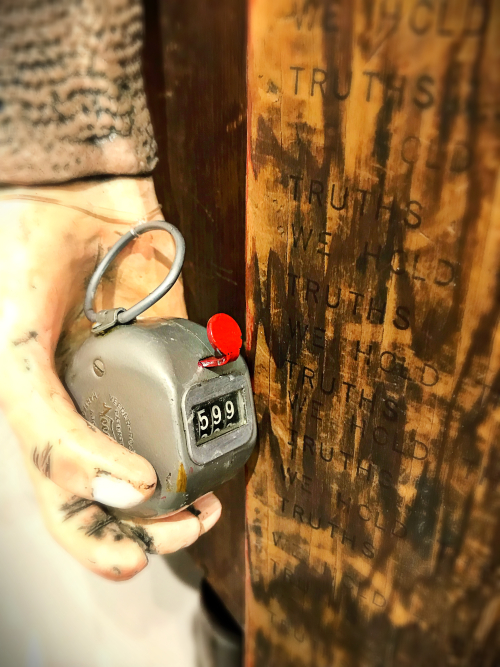 Each day, Joan checks a site like this one (which tracks the number of lies Trump has told since his inauguration) and adjusts the counter appropriately.  (The counter does get clicked during the day by gallery visitors like me, who can't help but add a few clicks to the counter.  Joan encourages this.)

I loved this piece.  (I actually loved ALL of Joan's work.  It's incredible.)  It was fun and whimsical . . . all the while making a point.

And telling the truth.

Have a great weekend!  (I'll just be sitting here.  Playing with my phone.)

Oh man, that is cool. I've always wanted to go to that show!!

Wow! I love the art and the calling out of the idiot in chief! Have a happy weekend with lots of fun with your new devices!

What a wonderful piece - love it!

Oh wow! I love it! How absolutely brilliant! And, what I think I love more is that the Orange Ogre would so not get it at all.

That perhaps is the most fitting thing ever!

Thank you for sharing (and I might have twitched a bit reading your watchscapades as well...yes, I do so love my Apple Watch!)

The creativity people have continues to blow my mind. This is brilliant! Have a wonderful weekend Kym! (I was just discussing my next new phone with Doug yesterday...I certainly need a new one for all my 2019 vacations!)

Thanks for sharing the images from the show. So cool.

I admire your re-pairing. I pair stuff once and then if something changes (e.g. new device) I just don't bother to re pair. It only really bothers me in the car but I can't figure the car pairing stuff out.

That is amazing! I love the whole idea, coming up with the lies, and the fact that she checks on it daily and updates the counter. We all know he lies all the time but it makes me feel better that Joan's artwork is peacefully calling him out instead of letting him just get away with the "alternative facts". Only 599? I would have guessed that number was much, much higher.

Pouting over here in Denver about being so far away from Chicago and the SOFA exhibition! Thanks for the fantastic share. Inspiring.

Amen - yes, plain as the nose on his face. I love the piece and the little cabinet as torso.

That is incredible. I can't even fathom having the imagination and creativity to come up with something like this. Thank you for sharing it with us, I feel like I was right there with you. I'd be adding clicks, too, starting with his recent one about how you need an ID to buy a box of cereal. Seriously. WTF.

Lose all your awards and badges!? I can't even. I am so proud of each one. Boo.
I am in awe of the cabinet. I have a thing for little cubby holes like that and I more want the the cabinet than I want to know all the lies through time (although, that is a brilliant idea for art). I love that the clown is wearing what looks to be a knitted sweater. I want art like this to not be needed. How cool you were able to meet and talk to the artist and hear more about this interactive piece.

well ugh - I hope you have the phone/watch situation back on track (hummm.... makes me think I'll be waiting a little longer for a new phone!) and thank you for sharing that piece. very cool that it's interactive. and oh-so-timely. sadly, that counter needs to go a lot higher.