Yesterday I mentioned that I've started feeling that "September feeling" . . . and it seems that many of you are feeling it, too!

Based on the comments you left yesterday, lots of us consider Labor Day - along with a change in temperatures and the loss of daylight - to be a turning point or symbolic start of a new year.  Some of us feel a bit restless -- anticipating the change of season, but not really feeling it yet (because weather), and many of us feel energized -- ready to embrace the coming autumn, and feeling a sense of renewal.

I'm up north this week, and while yesterday was super hot and humid (I felt like I was in the deep tropical rainforest instead of the north woods. . . ), today is cool and rainy-rainy-rainy.   Fall is definitely coming. 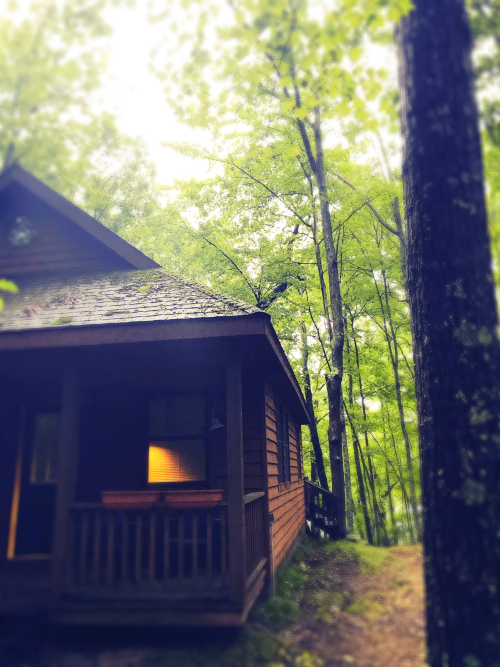 September has a back-to-school vibe that is hard for me to ignore - or escape.  Even though I haven't sent my kids back to school in nearly a decade -- and it's been far, far longer since I've gone back to school myself -- I just can't escape the "September feeling" of a new teacher and a new classroom, fresh pencils and unmarked workbooks.  September will always, always feel like a brand new start -- full of possibility -- for me!

Author Gretchen Rubin first remarked that "September is the other January" in her book Happier at Home -- where she set up her home happiness project to coincide with the academic calendar.  Gretchen noted that "each year, Labor Day was a milestone that provoked . . . self-evaluation and reflection."

That definitely happens for me, too -- just like it does at the (calendar) beginning of the new year.  I find September to be a great time to reflect on my year so far, to recommit to (and sometimes to even remind myself of) goals and intentions I set for myself back in January, and maybe even to set some new intentions for the remainder of the year.  I really do see it as a chance to renew myself.

Psychology research even shows that there is such a thing as the "fresh start effect."  It turns out that people are more likely to look at their lives differently afer a "temporal landmark" or milestone events in their lives.  These events can be as major as a medical diagnosis, a new job, moving to a new place, getting married, etc. . . . OR as commonplace as a birthday, the start of a new season, or even a new month.  These "temporal landmarks" (which can really be from nearly any life event. . . ) bring about feelings of change, of new-ness, of a clean slate.  They become a way of measuring our lives (before I had cancer/after I had cancer; before I graduated/after I graduated; during the summer/now that it's fall) -- and new ways of living them.

Think about it how often this happens in your own life . . .

Basically, we can conjure a new start any time we want.  But for lots of us . . . it coincides with the start of the school year.  September!

And what do we do with this "fresh start effect"?

We reflect.
We resolve.
We recalibrate.
We hit re-set.

I'm going to be spending some time during these last days of August . . . looking back and thinking ahead.  I want to embrace the changing season with a renewed sense of energy.

Hmmm. So much to ponder in this post! I think I need to get that Gretchen Rubin book and read it! I very much feel like September brings lots of changes - and they are all so good!

There are interesting things to think about here, and a cozy cabin on a rainy day may be the perfect place to contemplate. I've got lots of changes coming up, so September really is going to be a month of recalibration and resetting. I hope for good changes and fresh starts for all of us.

I am all about the temporal landmarks. This September for me is a recommitment to losing weight and living more mindfully.

Being Jewish, I always feel like I have two resets one at Rosh Hashanah and one on January 1. This year, the Jewish High Holy Days are in early in September -- which is great!

I'm with Kathy's comment - I've always thought the Jewish New Year was so much better timed than the January one our traditional calendar sets. ...still thinking about what September will bring for me - but I did resist the temptation to stop at Starbucks today for a PSL! (I did not, however, resist the temptation to look up my favorite PSL recipe https://greatist.com/eat/pumpkin-spice-latte-recipe-to-make-at-home and be sure I had all the ingredients on hand ;-)

Excellent post...captures all my thoughts and feelings and ideas, plans perfectly...now, will oyu make sure I stay on track? ;-)). Thanks!
Cheers~

September is a new beginning in that I'm looking for positive ways to get through the upcoming darkness and winter chill. I am not forgetting about the richness of autumn or the cozy feeling I have when thinking of falling leaves and golden light. We're planning household projects, things to do when the garden is put to bed and time is mostly spent in doors. September is a month of planning how to cope!

This is a lot to think about but I'm all for a fresh start! I love that my birthday is in September and often coincides with the first day of fall - all great chances to start new routines and reset the mind!

I've always felt that September is the start of my personal New Year. Maybe because we're Michiganders and so used to four seasons? Fall is a natural reset for me.

I live in the sort-of-South and September is a more muted beginning to fall than it was when I lived in the Midwest. The leaves don't start to crackle here until at least mid-October. It does get cooler at night though which is nice for evening walks.

I meant to add your cabin looks downright cosy and idyllic, Kym. A beautiful place to spend autumn days.

September seems more of a New Year than the actual one in resolutions, sometimes. School time was the deciding factor in the past, and just like Mondays, the beginnings of dates or events or happenings become something revived or rejuvenated.
This September is more of a get-back-to-routine month: to rejuvenate the home and the garden and the knitting me.
Hurray, fall is coming.

Thank-you so much for this wonderful post! I'm still going to fight the back-to-routine as long as possible but...I do feel the need to re-group, re-organize and tackle something big in the baking department!