Unraveling, or . . . You Can't Always Get What You Want

We'll just begin with this:  I was completely smitten with Kate Davies' Carbeth pattern the first time I saw it.  Long before "banging out a Carbeth" became a rallying cry in the knitting world, I was crushing over that distinctive shoulder line, the cropped and slightly boxy shape, and (I'll admit it) Kate standing there with her arms flung open wide in that brilliant Scottish winter setting.

But I was concerned about the cropped thing.  Could I pull that off?  Once I decided to just suspend my judgement on that little point, I set to looking for yarn.  Now, the pattern calls for a DK weight held double, and I happened to have this most lovely Madeline Tosh DK just sitting there, deep in the stash, waiting for its turn to shine.

I swatched.  And I washed and dried my swatch (because Tosh DK is superwash, and superwash is always a bit of a crapshoot).  I found my gauge, made some adjustments for the superwash, and set about to knitting. 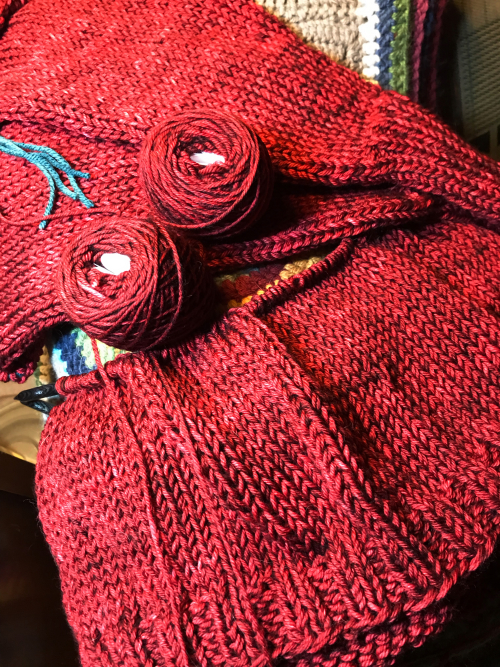 The yarn was lovely to work with.  It was going to be just glorious, I could tell!

It turns out . . . not all Carbeths are meant to be "banged-out."  Including mine. 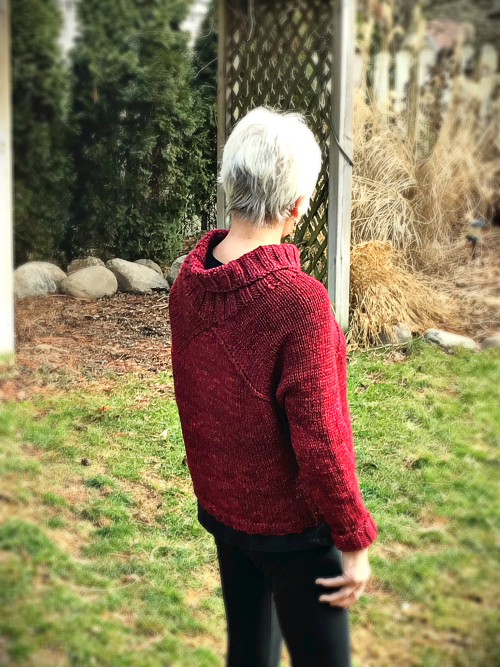 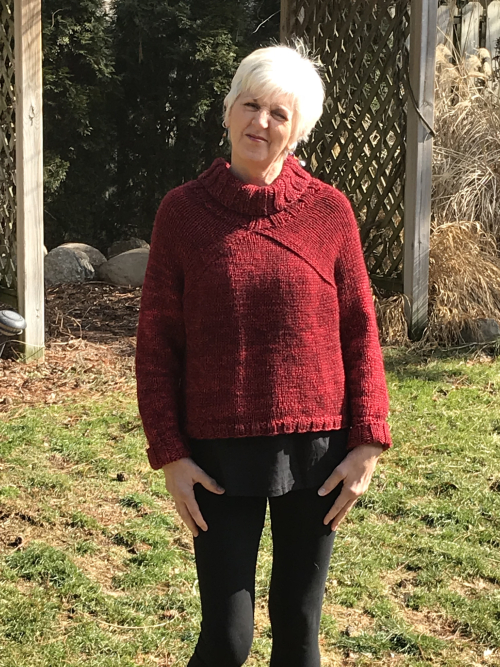 (Does this look like someone who is pleased with her sweater?  Nope.  No joy.)

Let's break it down. 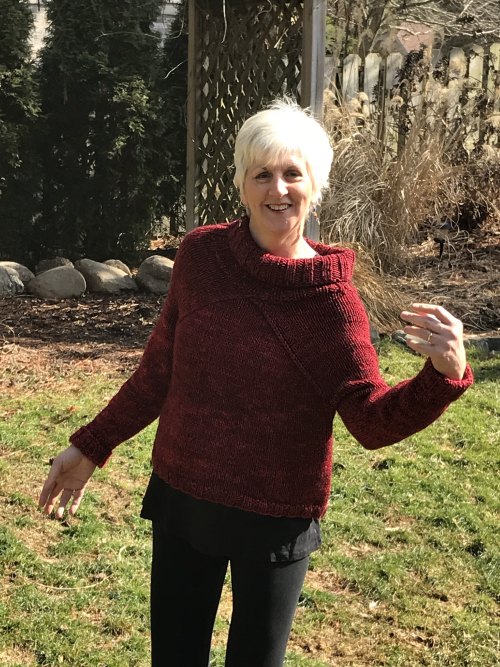 (This is where I wanted to insert a rather hilarious video of me adjusting and fussing with this sweater.  But when I tried, I blew up this entire post and I had to re-start.  So try to imagine it for yourselves.  Sorry.)

Here's the main thing I learned from my Carbeth experience:  There is barely any structure up top (no seams; the shoulders hold all the weight of the sweater), so it is highly sensitive to weight.  The weight of the yarn - and the sweater itself - can make a huge difference in fit.  My yarn (doubled) was super heavy -- and it pulled that sucker South in a hurry!  (I did have an inkling about this as I tried the sweater on a various points during the knitting process.  Every time I put it on, it was longer.  I should've seen this coming much quicker than I did.)

If you're going to knit a Carbeth - and especially if you are going to add weight by lengthening the body - really consider the weight of your yarn.  I would suggest using something light and lofty (Brooklyn Tweed's Quarry comes immediately to mind).  I would avoid doubling DK yarns, too (unless using super light and lofty DK yarns - like the one Kate used for her original).  And I would avoid superwash like the plague (because Problem Children).

Carbeth is a great pattern -- fast, fun to knit, and a great design.  Just think carefully about your yarn! 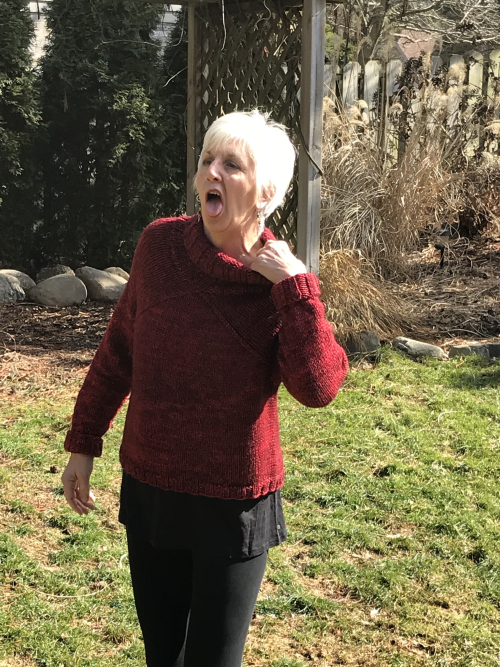 You can't always get what you want.
But if you try real hard, you just might be able to prevent someone else from making the same mistake.

Thank you for the full disclosure post. I am going to unravel my Stopover because I just cannot tell about the fit since it is a bottom up and I don’t want to start the sleeves wihile I am so doubtful. I want to knit sweaters that I will love and wear.

I am reeeeealy trying not to be in this camp, but WSS (weighty sweater syndrome) is a real problem even with NON-superwash wool. I am doing a fix on my neckline today. And, truth be told, my brain is wondering about what would happen if I did some surgery to shorten the thing (because with WSS any sweater will apparently grow)

Some days there is just no joy in Mudville.

However, I am strongly considering Quarry for the cardigan.... I must be a glutton for punishment! Ha!

I have a couple of Superwash sweaters that tend to grow a bit. I love the front on the Carabeth but fear the cropped look. I am so shortwaisted the regular one would be a tunic! Love that red though! What is your plan for it?

I am always a big fan of Full Disclosure and I applaud yours! There is a snowball's chance of me knitting Carbeth (or really any sweater), but your experience and thoughts will help lots of others. Love your expressions (and am glad I don't have these issues with hitchhikers)!

Drat. All that time to end up with an unwearable garment. I've been there SO MANY times. I have reknit several sweaters (or not bothered). Knitting (any craft) can be unforgiving when we want the end product more than we want to listen to the inner voices telling us to tread lightly. Do you think the style is still something you'd enjoy wearing? I love the color on you and if it fit well the style would be fun!

I'm so sorry to hear how it turned out - it was so cute on you in the previous post! Crap. All that wasted time and effort. I try to avoid superwash, too, for the same reason. Just too unpredictable.

If you consider doing this pattern again some time (and it really was cute on you), I had looked at some of the projects after that because I really thought short rows would be a great way to raise the back and skip the turtleneck - I found one project that did exactly that, and I think it looks really good: https://www.ravelry.com/projects/EndlessQ/carbeth

If you want an alternate use for your gorgeous yarn, one of my friends made "Pop Block" with madelinetosh DK, and it is absolutely scrumptious. The tucks make the shawl curve in a way that really wraps well around your neck/shoulders that you wouldn't expect from a rectangular shawl. I borrowed it for an afternoon and didn't want to give it back. I actually made one from a different yarn and like it OK, but I still want to make another one out of the madtosh.

Well, at least you know what the problem is. Such a shame too, since the color is so lovely.

You were very generous in keeping us away from another disaster.

So-o-o sorry. It had such promise. Thank you for the tip about superwash wool growing. The neckline is so lovely, especially from the back, maybe you can retain it and mesh it with another body? Or is that just whistling Dixie?

If you haven't done this: get it wet and put it in the dryer. Superwash is meant to be washed and dried. It may not solve the problem since this is such a heavy sweater, but then again it may. I have two sweaters that were saved by the dryer.

I'm sorry about the sweater results but that last photo - I just LOVE it. It captures your personality in a truly wonderful way.

I have seen a few Carbeth photos and thought things like, "That's too big" or "It's droopy" and some of those reactions must surely be for the reasons you state -- the yarn is too heavy and the added length (who DIDN'T make that longer??) only makes it worse. Also, I think Kate Davies is quite petite so there's just naturally less weight dragging it down (in addition to the lighter yarn to begin with). Darn. That color is amazing!! What are you going to do with it?

I love the photos and the full disclosure. Some sweaters just aren't meant to be. I can't tell you how many times I've ignored the little nagging voice telling me something about my knitting isn't quite right only to rip out later. You learned something from this experience and maybe will repurpose the yarn. As I like to say, "you are getting your money's worth out of the yarn when you knit it again. "

Well I was looking forward to having Carbeth's together ;-) Of course, I don't know yet what I'll think of mine, on. I looked at your first picture, and thought - "but I thought she was making it cropped." Ah well, knowing when to cut your losses is one of the benefits of experience.

PS - I think it's not just weight but also "body" - many superwash yarns just want to slink.

Sorry about your experience...and sweater! Bummer! And such a lovely color on you! Live and learn...and better success with your next project!

Well, I am still going to attempt this sweater. But you saved me a real disaster -- for some reason I read the pattern as calling for worsted weight doubled, and worsted weight was what I ordered. Sheesh! That sweater would have been 1, too big; B, too warm; iii, w-a-y too heavy. I am in correspondence with Webs right now to facilitate a return and exchange. Thanks for saving me!