Stepping Away from the Edge
Home Archives Profile Subscribe
Focus. Or . . . Ferris Was Right
At the Movies

In high school, I was in French Club.  Each year, we had a big outing to a French restaurant down in Colorado.  We got really dressed up.  We could only speak en français.  We ate French cuisine ordered from French menus.  We always tried escargot.  It was a Big Deal.

I remember being so surprised, my first time at the French restaurant, when they brought out a citrus sorbet between the first and second courses.

To cleanse the palate, they said.  (In French, of course.)

Because, yeah.  Palate cleansers weren't A Thing in my casserole-eating family.

Let's just say . . . I've come a long way since then.  Not that I typically serve palate cleansers on a regular basis or anything.  But at least I know what they are now -- and the purpose they serve in preparing one for . . . the next course. 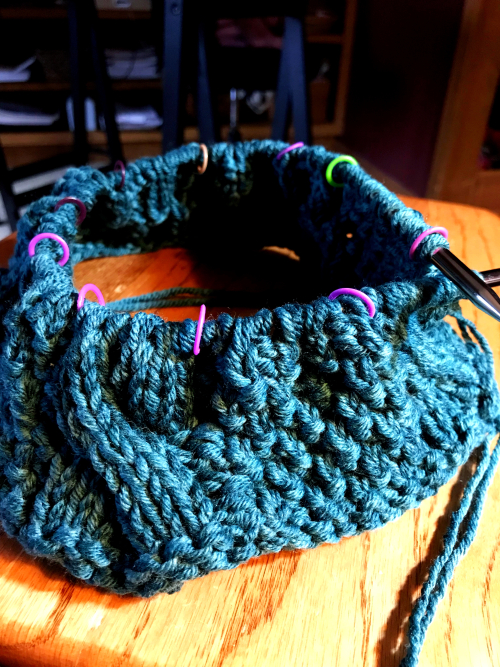 I guess you could say I'm knitting the equivalent of a palate cleanser right now.

I finished my sweater on Sunday (but haven't had a chance to weave in the ends or block it), and I'm not ready to jump in to another big project quite yet.  So I'm . . . cleansing my knitting palate . . . with a simple little project.  (This one.)  Quick.  Satisfying.  Different.  By the time I'm finished knitting it, maybe I should be ready for my next big project.

My reading is tending toward the palate cleansing as well, it seems.  Feeling rather weighed down by the books I was reading, I decided I needed a little break. . . and gobbled up the sixth book in Ann Cleeves' Shetland series, Thin Air.  It turned out to be just what I needed.

Sometimes a little palate cleanser really does the trick!

That yarn is really beautiful! I have read Ann Clevee’s biooks but I am a big fan of the Shetland and Vera shows.

Ooh, that's a very pretty palate cleanser! When I was about eight years old we went to a fancy restaurant for Christmas Eve. When the waiter placed lovely warm bowls of water, lemon and some rose petals in front of my sister and I, we didn't know what to do so we picked them up and started sipping from them, thinking it was fancy tea. Coming from a casserole-eating family myself, I was not familiar with palate cleansers and finger bowls. (Hey, it tasted pretty good!)

I so agree on palate cleansers whether it's for food, knitting, reading or anything, really. I was in the French club, too, and we always went to The Magic Pan for crepes every spring. It was fun and we also had to speak in French but since the people at the restaurant didn't, well, it sort of fell flat. I'm knitting socks for Jackie, they are a great little palate cleanser, and I'm reading Future Home of the Living God. The book I read prior to that - This Is Your Life, Harriet Chance - was an excellent palate cleanser after Sing Unburied Sing. (I can only take so many heavy books in a row.)

That cowl looks like it will be delightfully squishy~and the color is wonderful! I have not read any of the Ann Cleeves books, but I loved watching Shetland on netflex and am anxious for the 4th season (already filmed and...I believe...released on the other side of the pond this past dec.)

I love that cowl! I just finished one myself that will be in the post to my daughter in CA this week! A palate cleansing birthday knit was just the thing to reinvigorate me to do some actual math and finish my Stopover! (Sleeve 2 is almost done!) XO

I love the Shetland books, but I can't remember where I left off, and I started reading them before Goodreads came along ...

After a finishing a big project, a sweater or book say, it's nice to take a step back and refresh the perspective. I, too, remember the first time I had a meal with a palette cleanser. I thought I was SO fancy and felt like a royal!

I'm starting to think I need a SEASON of palate cleansers. and as I typed that, I thought, huh, I guess that's what Spring is for!