By the time you read this post, I'll be headed off . . .to a 3-day Alabama Chanin workshop in Florence, Alabama with Vicki.  (Plus a bonus visit to Nashville.  Stay tuned!)

I haven't knit a stitch this week, but I have been stitching.  I've been working hard to try to wrap up an Alabama Chanin project to take with me. 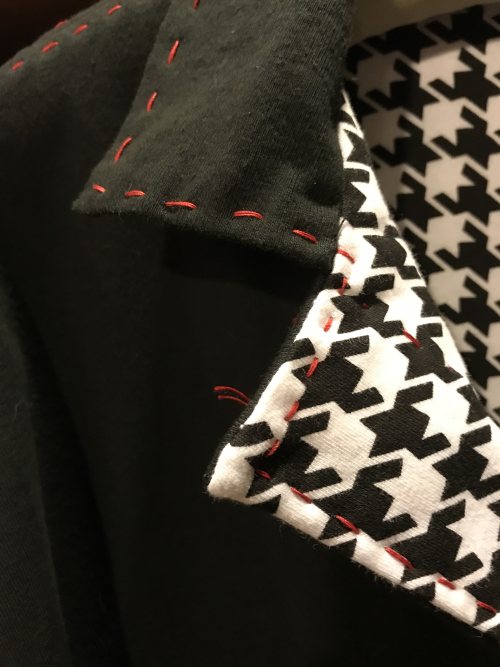 And while it's ALMOST done . . . it's not actually done.  (I still need to sew on the snaps down the front.)  So I'm planning to cram it in my suitcase and maybe work on the finishing touches while I'm down there.

What is it, you ask?

I have some bad photos to show you.  Photos I took myself.  In the bathroom.  After the sun went down.  In a black garment.  (Just so you won't have high expectations here.) 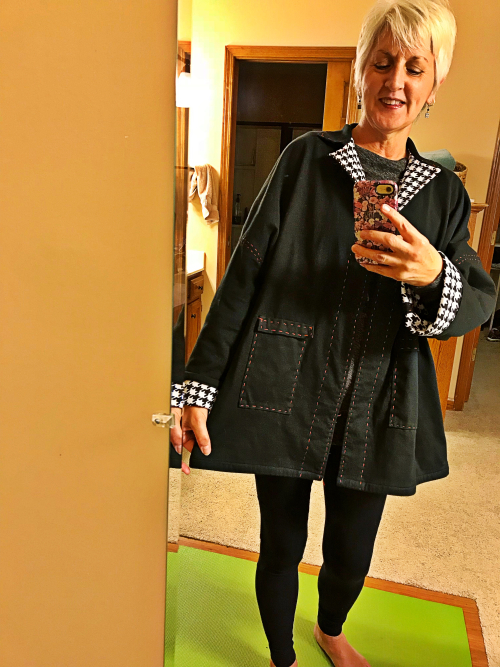 I wanted to use a contrast lining - sort of like the one in the pattern link (above).  In fact, I wanted to use JUST that contrast lining - from Alabama Chanin.  Until I found out it sells for $50/yard.  And I needed 3 yards.  So.  No.  I visited my local fabric store instead and found the herringbone knit you see above.  Only $9/yard!  A bit wild - and definitely not of the same quality as AC - but sort of fun. While the design is a basic boxy jacket (with intense bat wing action), the actual sewing was a bit more demanding than other AC things I've made.  Partly because there is a collar and a facing, which just ramps everything up a notch -- but also because the sewing instructions are a bit . . . vague.  (Let's just say it's a good thing I've done a lot of collars and facings before.)

For this project, I did some of the stitching (seams; hem) by machine, and did the topstitching by hand. 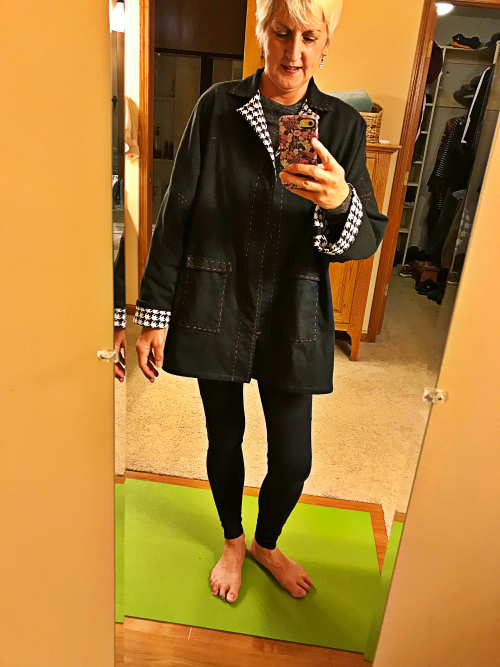 The verdict is . . . I like it!  I'm planning to pack it - along with the snaps and my sewing supplies - to finish it up in Alabama.  Maybe I'll even talk Vicki into helping me take better photos (that don't have my toilet in the background) (just sayin').

Today's post is part of Unraveled Wednesdays.  To read more Unraveled posts, hop over to Kat's!

I LOVE it! It looks so good, I didn't even notice the toilet in the background. :-) Safe travels, have fun, and I can't wait to see what you do at the workshop!

You will definitely need a coat this weekend, it has suddenly turned chilly “down” here. Just layer and you can strip off the beautiful coat and then, bring along a self-knitted cardigan sweater (did I say layer?) and show off your skills!

It is really beautiful. Have a great trip

I LOVE IT! Photos and toilet and all! I am so excited for your adventure with Vicki! Have so much fun (which is really redundant to say, because of course you will!) AND STITCH ALL THE THINGS!

I am really impressed, as I cannot in my wildest imagination even think of trying such a project. Yours looks great!

I hope you have a really wonderful trip.

I think your coat looks great & I can't wait to see the wonderful things you will do at the workshop!

That's a great design and a really perfect coat for fall! Enjoy your trip, I'll be following along vicariously!

You did it! Well, almost! Enough that you can wear it, show off your mad skills, and dazzle the class. I love the lining! You have the best person available for the photo shoot job! Have a really lovely time! I know you will. I'm very excited for you and for Vicki AND to be there together. Safe and fun travels!! xox

That coat is great! Hope you have a fantastic trip!

Wonderful! Looking forward to seeing the finished version and I like the herringbone lining. I'd take it to Alabama too! Have a super trip and looking forward to "sharing" a bit of it with you!
Cheers~

LOVE LOVE LOVE that jacket! and if the weather forecast is right, you're going to need it (and a heavy sweater!) while you're visiting the South. Looking forward to traveling - and stitching - along vicariously. Have a wonderful trip!

Can't wait to hear about your time down in Florence. The coat is adorable!