I've said it before and I'll say it again:  Our yard is weird.

Our house is built into a cross slope, which means . . . we have a steep, downward slope -- in two directions.  Because of the hill, our front yard is completely dominated by this (rather extreme) hill.  To manage the sloping front yard, we depend on retaining walls.  There are two:  A long, high stone wall that moves across much of the front of the yard, and then a two-tiered timber wall up at the front of the house along one side.

(Just as a side note . . . I don't garden much in the front of our house.  The gardens I spend most of my time growing and tending are in our backyard.  Where the slope is less extreme, and where we spend most of our time.)

Here's a photo of our front wall taken early last spring as Tom was . . . considering and assessing the situation.  Which wasn't good. 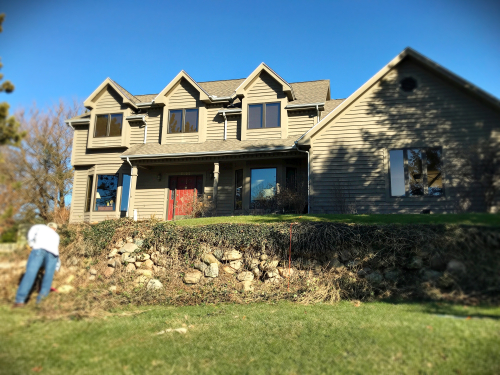 English ivy (planted by the former owners) had taken over the rock wall.  Should we pull it off?  Would it look better?  (No.)
Weed-trees had rooted themselves between the boulders.  Impossible to pull them out, though.  The only option was to cut them back.  (Ugh.)
Boulders were dislodging and rolling off the wall and into the lawn below.  (Landslide waiting to happen.)
Ground bees had nested behind the boulders.  (And there were likely snakes comfortably sitting behind that ivy.)
Plus . . . the whole thing was just not attractive anymore.

And up at the house?  Things were no better.  The timbers were ugly -- and rotting.  There were gaps.  And weeds.  And bees.  Plus, the wall was no longer . . . retaining!  Soil was washing out, and our front porch was collapsing.

Tom - always willing to tackle a challenge - watched a few You Tube videos about building retaining walls.  But with a job of this scope, he knew right away that he was out of his league.  So we called in a landscape architect last spring.  He gave us options and designed new walls for us.

And then we waited.  With the wedding and other summer vacations and plans, we asked to be put on the schedule for fall.  Knowing that we were going to be tearing the front yard up come fall, we just let everything go, garden-wise, up front . . . all summer long.  (Which was kind of freeing, y'know?)

Here are photos from the morning the work began (and after we had rescued the few plants I wanted to save). 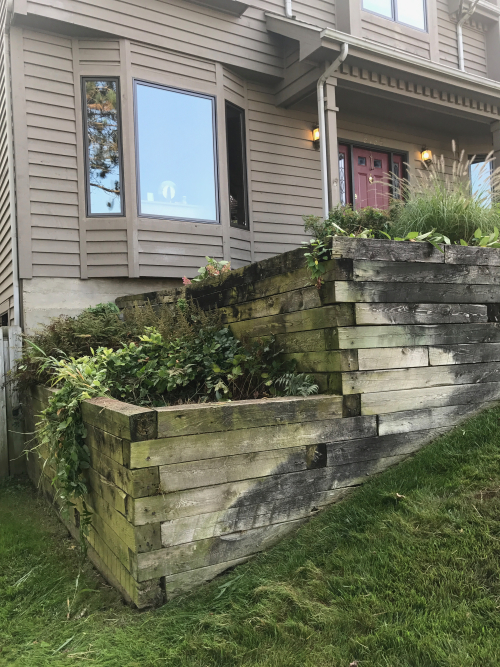 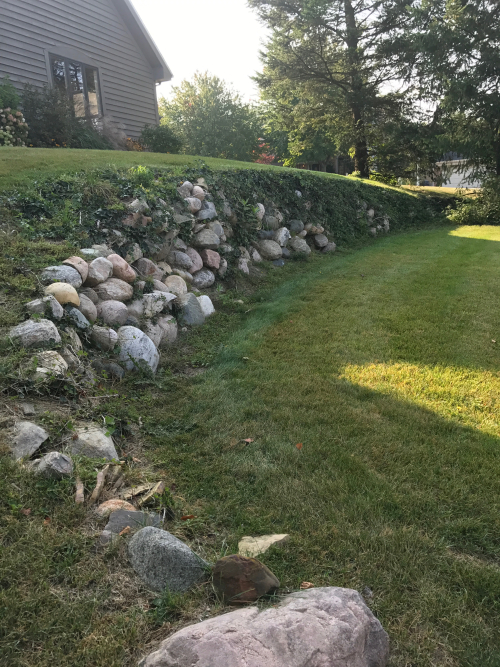 The work itself took about two weeks.  Two weeks of mess, noise, and WAY more tearing up of our lawn than I anticipated.  (Because I just failed to realize what two bobcats would do, y'know?) 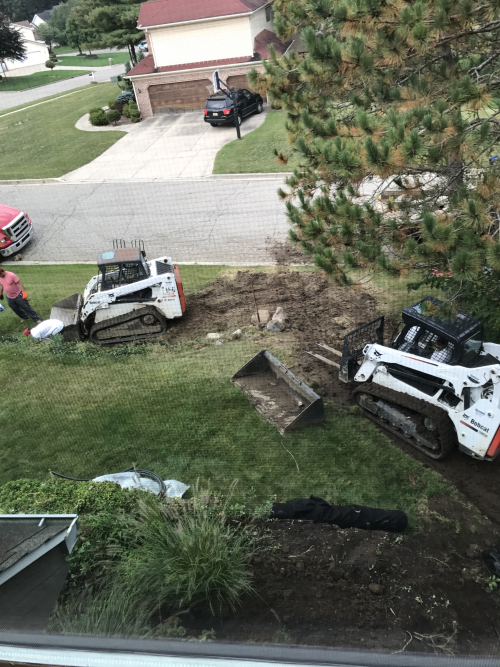 The project is finished now, though.  And I must say . . . it turned out better than I ever imagined! 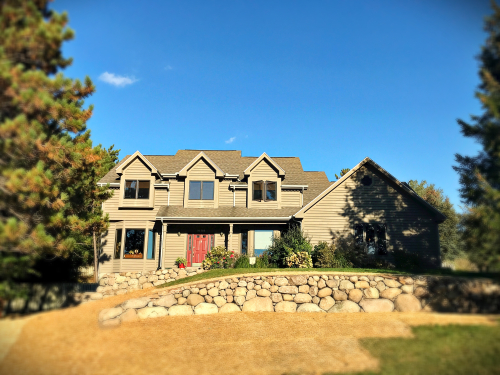 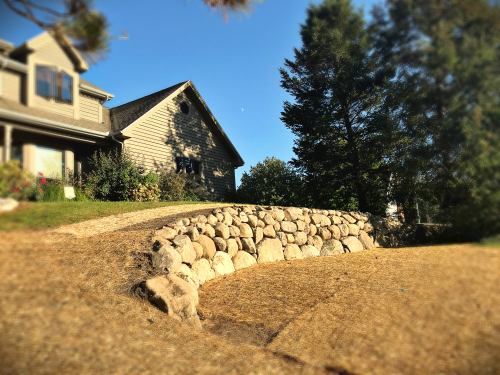 If you're ever in the neighborhood, be sure to come around front, okay?

What a transformation! That rock wall is lovely.

Wow! That is really beautiful! The walls look great now and I bet the areas will look even better when you've worked your gardening magic on them.

Wow, what a difference! It looks great and I hope you enjoy your future garden spaces.

That's amazing! I said "wow" outloud. I didn't think it looked *that* bad in the before pictures but, wow!

Oh, Kym! What an incredible difference!!! I bet you're making plans for FRONT gardens now! I love it and can't wait to come see it in person.

It looks fantastic! You must be thrilled to have a new front to actually enjoy.

Most definitely worth the wait, noise, "mess," etc. The new wall/s look lovely just as they are now and I look forward to seeing the "Kym touch."

Another wow! It looks terrific and I'm sure your brain is spinning with great landscaping options!

WOW! That is beautiful!! Sometimes it's definitely worth it to call in the experts. I'm sure you have a lot of ideas for your new canvas. ;)

Like everyone else, I'll say WOW!
Looks beautiful. And definitely the right choice to hire an expert to do the wall. I had one do some retaining walls at a previous house, and it was amazing to watch them work and manipulate all those stones.

We replaced our 100-year-old water main (no leak, but wanted to do it pro-actively since we knew it was in poor shape), and a big patch of our tiny front yard (all garden, no grass) had to be ripped up to do it. Since we were already losing a lot of the plants, we considered having the front porch re-done in cement since the original wood is in pretty poor shape, but when they told me the ENTIRE front yard would be a loss because of the equipment and piles of dirt dug out for the foundation, we decided against it. Not sure we made the right decision, because we're still stuck with the crappy porch that needs to be completely rebuilt.

Bet you are the envy of the neighborhood. The whole story of it is very inspiring. I loved it.

It looks terrific! You'll have a great time figuring out what to do with all of your new open space!

The change is quiet drastic and looks amazing! You'll have a great time deciding what to do with the new planters. Hiring it done was certainly the right thing to do for no other reason than the short amount of time it took in comparison. Your yard and house look very inviting!

Wow is right...very nice and a load off your mind I am sure. You can garden the front now too!! :)

An amazing difference! The new walls are beautiful Kym. I can't wait to see what you do with your new canvas - have fun planning!

Wow! What an amazing transformation!!!! Oh, the great gardening gene is going to rise in you to make it absolutely beautiful-can't wait to see what comes next!

It looks very pretty. I like how both walls are now stone. Enjoy your blank garden canvas!

Your new yard is wonderful! I can't wait to see what you do with those blank gardening canvases next year!

How fabulous! it looks wonderful now ... and I'm sure your gardening additions will send it over the top. (also, I just read your past three weeks of posts ... loved seeing the wedding and reading about your trip to Colorado ... and just in general, catching up! can't wait to see what sweater you're going to knit - with Wollmeise!)

Wow! O wouldn't have been able to imagine the difference that makes, the stone retaining walls are so pretty and I love how they curve (or slop? not sur eof the right word). Are you having fun choosing what to plant?

(apologies for the typos, above. When will I learn to slow down before I hit send???)