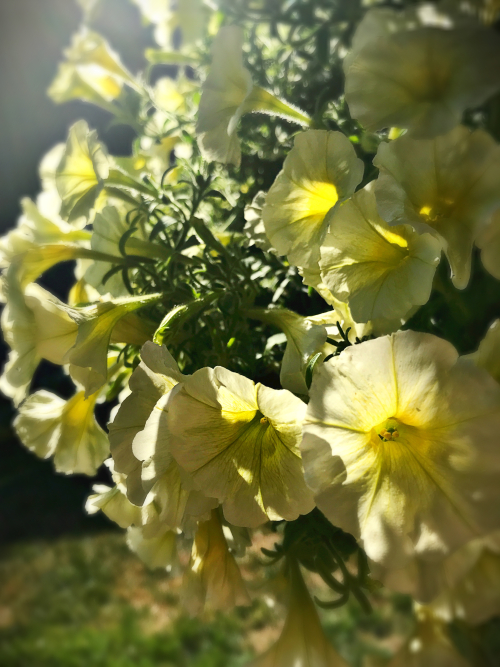 There have been trips up north, bike rides, ice cream, a successful Solstice party, gardening, and mini-celebrations along the way.  And, from the looks of it, there are more good summer-y things yet to come.

Watching:  Well.  Let's just say nothing on the screen.  I don't watch much television anyway, but during the summer I hardly ever turn it on.  Oh.  Except Grantchester; I am keeping up with that one.  (Because James Norton.  Who can resist?)  Mostly, right now, I'm watching things grow in my garden -- blooms, weeds, nuisance plants from my neighbors' gardens, that kind of thing.

Stitching:  Well.  Not much on that front either.  As I explained in Wednesday's post, I have cast on for the Through the Loops Mystery Shawl.  And that's pretty much where I am still.  By the time I sit down at the end of the day, I don't have the energy or attention span to manage even a simple lace pattern.  I'm going to be way behind with this year's mystery knit.  (And I'm fine with that.)  I'm thinking about starting something more . . . basic . . . to knit in the evening when I can't focus on lace, but do want to knit.  (Stay tuned.) 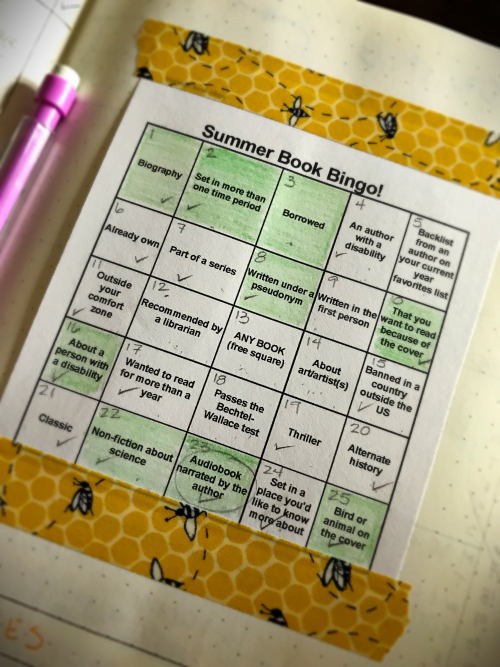 Reading:  I AM reading.  As you can see, my Summer Bingo reading is kind of all over the place.  I'm not seeing any BINGOs coming up soon, but eventually I'll get one.  Right now, I'm listening to Arundhati Roy's The Ministry of Utmost Happiness (I'm not sure which square it will fit into quite yet, but I'm sure it will fit in somewhere. . . ), and I'm reading The Gifts of Imperfection, an older one from Brené Brown (which will fit nicely into the "backlist" square).  (As I earn BINGOs, I'll tell which books I read to fit in each square.)

Humming:  This one.  I went to a Red Hot Chili Peppers concert last Sunday, and I've been singing this one ever since!   (Can't stop, addicted to the shindig . . . )  Tom had to miss the concert because of a scheduling error (his, not mine).  Don't feel too badly for him, though.  Because he was in Key West catching this . . . 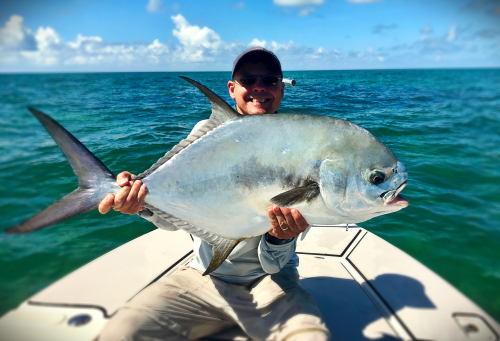 That's a trophy permit.  (He was thrilled.) 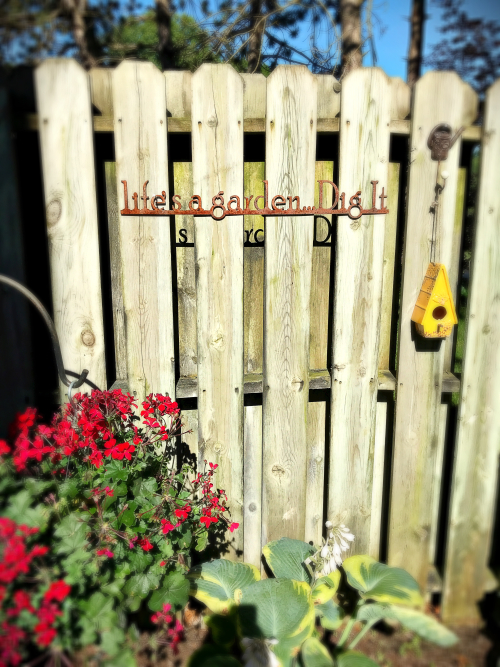 Gardening:  I'm really enjoying my time in the garden this year -- and I am spending a LOT of time out there.  I have . . . well, kind of overdone . . .my garden; I think I've reached my limit.  My dream was always to completely ring the perimeter of our fenced-in, L-shaped back yard with garden beds.  And I have achieved this feat (I'll blog about it sometime later this summer).  But.  It's an awfully lot of garden to keep up with, y'know?  So it's a constant game of whack-a-mole.  Some parts look great, while others need a bit more attention.  I am accepting that this is a constant, flowing Truth.  I do have fun puttering around out there, and now that bulk of the work has been done for the season, I can spend a bit more time just enjoying things from time to time (if I can keep myself from popping up to weed something or trim back something else). 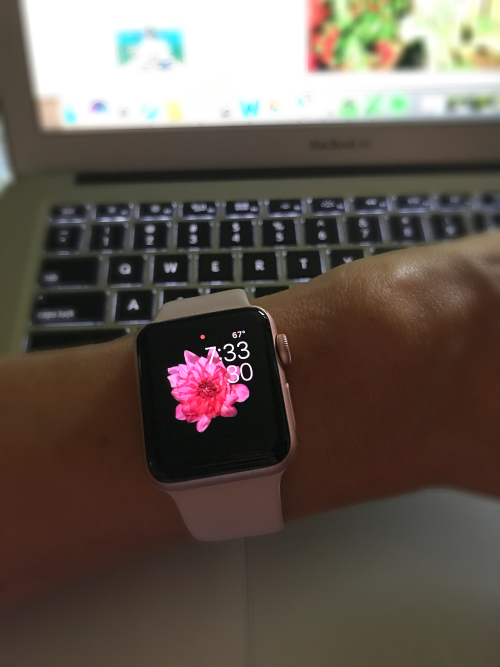 Playing:  I finally caved and bought an Apple Watch last week.  I was hoping it would help me track my workouts -- including my swim workouts.  And it does.  Kind of.  I mean, it's waterproof and all -- and it does seem to accurately track my swimming.  But it does not track kick-sets at all (that's kicking without any arm movement; kind of a staple of swim workouts) . . . which is unfortunate.  (Especially because it doesn't allow for manual adjustments either.)  So.  It's cool.  And I like it.  And it does track most stuff.  Just not all the stuff.

Dreading:  Neighborhood fireworks.  When I was younger, I used to love the Fourth of July.  And I really do like watching fireworks.  But . . . the joy has gone out of it for me now that fireworks have become legal in Michigan -- even in residential neighborhoods.  Oh, yikes.  It's misery!  And especially for the dogs.  We wrap JoJo in her ThunderShirt and administer the "relaxing drugs" from the vet . . . but we still have to hunker down in our basement "bunker" for several nights.  (It's even worse up north at our cottage.)  So.  I'm dreading the next few nights -- and eager for that part of the weekend to be over. 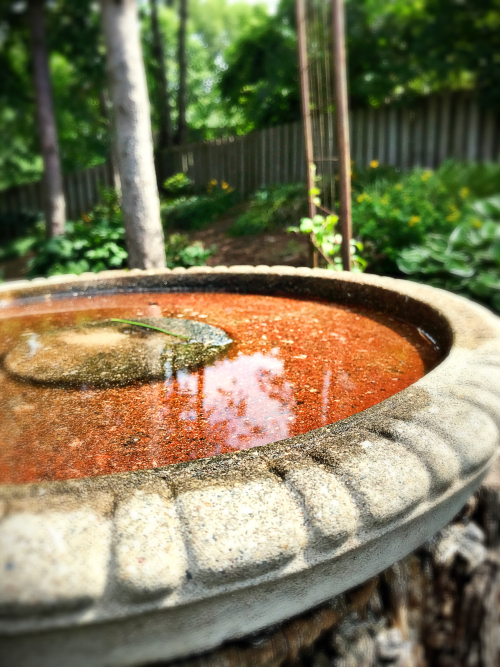 Looking Forward:  We've got a nice vacation coming up in July -- a week on Beaver Island up in the middle of the northern part of Lake Michigan.  It probably won't be terribly warm -- but it's going to be gorgeous and relaxing and fun.  The dogs are looking forward to it, too -- because they get to come with us for this trip!  (Keep your fingers crossed that JoJo - of the carsickness - can manage the ferry ride.)

That's what's happening in my corner of the world right now.  How about YOU?

Sounds like you had a lovely month. I have been eyeing the Apple Watch but part of me wants to track less and just enjoy - but I do love the gadgets. I am also not a neighborhood fireworks fan.

Just reading all of this left me out of breath. You are one productive girl! And then there's hubby with that magnificent fish! I think I'll take a nap lol!

I haven't watched any Grantchester, so thanks for the James Norton rec! I'm the same with knitting, and think that's why hitchhikers are the perfect basic knit for me at the end of the day. And congratulations to Tom on his trophy! I don't know permit, but that one is certainly big and really beautiful! Will it be mounted on your wall? (We have a once-in-a lifetime trout here.) Good luck to you and JoJo!

My garden is much smaller than the one I had back in NY and still, I can't seem to keep up with weeding, but somehow, I don't really care if my garden is perfect, just that it is beautiful, attracts bees & butterflies, & brings me a sense of peace. I'm looking forward to reading The Ministry of Utmost Happiness, but it will be after summer bingo. Enjoy the weekend!

Yes -- to Grantchester on tv.
Knitting -- socks by the Cat Bordhi method. It makes me rethink beyond the plain vanilla socks.
Reading "The Leavers" by Lisa Ko, so far so good page 56.
I will be humming to the symphony tonight -- it's playing music to "ET, the movie" -- a kid's event with my granddaughter, she is visiting for a week.
Garden -- all I can say is cucumbers and more cucumbers 🥒.
Playing -- board games with above mentioned little girl -- one of which was a Monopoly game two days long with my spouse and his sisters (the great aunties) -- brings out old memories. And rivalries.
Fourth of July - quietly in the country side at home.
Happy summer to all!

I feel you on the fireworks!! They have been set off around here throughout June. Just once or twice a week - someone will set off one big explosive sounding one that scares the heck out of me and the cat! And then it is over..until the next time...and you never know when that will be. And then last year, people on all sides of us - front, back, left side, right side, were setting them off for hours. I thought I would lose my mind. Even with the windows closed and the air turned on, it is still loud. The cat was terrorized... and then they will go off - throughout July I'm sure.... sigh...

Just saw Grantchester show up in my PBS newsletter - woot! - we have TWO episodes to watch tonight! and I am 100% with you about the fireworks. To make it even worse, we have days on ends of thunderstorms in our forecast. Holly is sticking close ... good thing I have a "bit" of knitting to do these next four days and will be staying close to home :-)

Congrats to Tom and to you for the bingo squares...I am toying with the Apple Watch so your review was helpful. Good luck with the mystery shawl; I too bro't my knitting downstairs so I will be more inclined to knit when the TV's on.

In summer our TV collects large amounts of dust, but the iPod gets lots of use. We have fireworks restrictions and the noise starts today and goes through next week. Sadly, it happens again at the end of the month as we have Pioneer Day. ugh. Not looking forward to the day we'll console a new little one. You'll have to tell us more about the vacation. It sounds relaxing! xo

This is such a lovely post! It seems that you have a lovely summer going on, with what sounds like continuing plans. Enjoy it all. :-)

We're busy getting the yard ready for a big family bash on the 9th and have been having a bit of a staycation these 4 days. No plans, reading, a little knitting, a bike ride. I told Doug this morning I see this as excellent retirement practice! ❌⭕️ And tell Tom congrats on that great big fish!

I despise the kinds of fireworks that just make noise, even more since we have dogs. Bear (1995-2011) and Milady (2011- ) were/are terrified of them. Lucy (2003-2016) and MIscha (2011- ) didn't/couldn't care less. I used to put Bear in the lower level bathroom with the exhaust fan on and the door closed, but a dog's hearing is so acute that she was still stressed. Eventually we got doggie Valium from the vet, which made her 4th of July so much more relaxed.

We spent a few days prior to the 4th up at The Lake and I was so happy that we heard fireworks only once -- quick & done! There was a bit more at home the last few days, including the "firecracker alarm" that marks the start of the annual Firecracker 5K (it was time to get out of bed, anyway). Our cats get skittish, too.