Perspective from a Shoebox

Tom has been going through shoeboxes of photos and clippings and . . . stuff . . . that he's been carting around and storing in closets ever since we've been together.

I can't believe some of the stuff he has squirreled away in his shoeboxes!  Amazing things.  Newspaper clippings from high school races.  Race programs.  School papers.  Every single issue of his high school newspaper!  Certificates.  Ribbons.  Prizes and awards.  Things printed with that purple ink of ditto machines.

Seriously.  The stuff time capsules are made of.

He's sorting through things and tossing most of it.  But, along the way, we're enjoying all these treasures from the past.

Let's go back to the time of this photo.

Tom was a senior in high school.  A runner - cross country and track.  Also a good student with a great sense of humor and a penchant for satire.

We found this paper (among many) in one of his boxes . . . brittle now, and faded by years of storage. 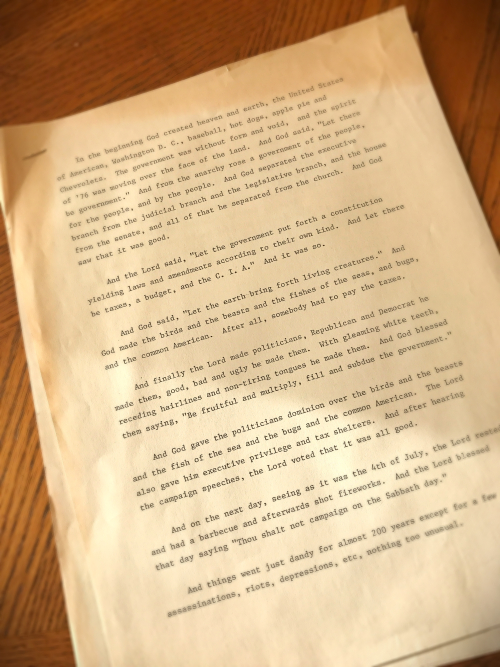 He can't exactly remember why he wrote this particular paper.  Maybe a class assignment?  Maybe a submission for the school paper?  Maybe just inspired by . . . current events of the day.  Whatever the reason, though, it's fun to read -- and especially because while it was written in 1975, it resonates today.  (In a way I'm sure 1975-Tom would never imagined.)

I thought you all  might enjoy reading it, too, so here it is -- Tom's unnamed article from 1975:

In the beginning God created heaven and earth, the United States of America, Washington D.C., baseball, hot dogs, apple pie and Chevrolets.  The government was without form and void, and the spirit of '76 was moving over the face of the land.  And God said, "Let there be government."  And from the anarchy rose a government of the people, for the people, and by the people.  And God separated the executive branch from the judicial branch and the legistlative branch, and the house from the senate, and all of that he separated from the church.  And God saw that it was good.

And the Lord said, "Let the govenment put forth a constitution yielding laws and amendments according to their own kind.  And let there be taxes, a budget, and the C.I.A."  And it was so.

And God said, Let the earth bring forth living creatures."  And God made the birds and the beasts and the fishes of the seas, and bugs, and the common American.  After all, somebody had to pay the taxes.

And finally the Lord made politicians, Republican and Democrat he made them, good, bad, and ugly he made them.  With gleaming white teeth, receding hairlines, and non-tiring tongues he made them.  And God blessed them saying, "Be fruitful and multiply, fill and subdue the government."

And God gave the politicians dominion over the birds and the beasts and the fish of the sea and the bugs and the common American.  The Lord also gave him executive privilege and tax shelters.  And after hearing the campaign speeches, the Lord voted that it was all good.

And on the next day, seeing it was the 4th of July, the Lord rested and had a barbecue and afterwards shot fireworks.  And the Lord blessed that day saying, "Thou shalt not campaign on the Sabbath day."

And things went just dandy for almost 200 years excpet for a few wars, assassinations, riots, depressions, etc. nothing too unusual.

Now the president was more subtle than any other politician.  And he said to the other republicans, "Did the Lord say that we should not bug the other party's campaign meetings lest we die?"  And they said, "Yes, mister president."  And the president said, "Pardon me, but I beg to differ.  We will not die, but get me re-elected."

And so the republicans bugged the other party's campaign meetings, and they won the election.  But then someone blew the whistle and told the Lord.  And the Lord made the president resign and banished him to some dreaded place in California.  And he cursed the politicians saying, "Graft and corruption shall fill your lives, and the people will trust you no more."

This is soooooo cool! And, yes, resonates (unfortunately) today as well.

Oh my, LOL! And, the next chapter: If we work in collusion with a foreign power, we can beat the brilliant woman and make ourselves richer!

Quite insightful that Mr. Mulhern! Thanks for that!

Let's hope this time around the Lord banishes the president to some place in Siberia. It's only fitting, after all. Tom's piece is great, I'm going to make sure Dale sees this one.

That Tom is so clever and too apt a soothsayer.

What Chloe said :-) I, too, laughed out loud at how prescient Tom was...but, too, it makes me very (which my spell check originally changed to "cry" - perhaps my keyboard did a Freudian slip?) sad...

Too close for comfort! One would think there would've been some learning there, after all these years. 'Fraid not...power indeed corrupts...Come judgment day...

Thanks for sharing this...and good for Tom