"When you draw the lines, you make the rules."
--- Karl Rove

I was always a good student.

I learned and understood the basic tenets of American government.  You know . . . we the people; separation of church and state; checks and balances.  I was well-versed in all the biggest hits of Schoolhouse Rock.  I lived through the Watergate hearings.  I listen to NPR.  I get it.  I know how things are supposed to work.

I must have totally fallen asleep at the wheel.  Because I really didn't get this gerrymandering thing. 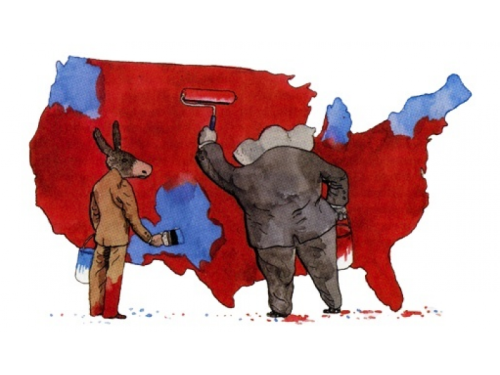 But I'm getting it now.

And it's something we ALL should "get."  Because what happens with gerrymandering (drawing those voting district lines in a manipulative way) is, basically, this:  Politicians draw the lines . . . to benefit themselves.  Gerrymandering gives polititicians the power to choose their voters --- instead of giving voters the power to choose their politicians.

Redistricting - the process of drawing electoral district boundaries - should be a non-partisan process.  And in 12 states,* it is -- with independent or non-partisan commissions determining the boundaries.  In 5 more states,** redistricting is proposed by independent commissions, but approved by the state legislature.  Four states - Wyoming, Delaware, South Dakota, and North Dakota have low populations and only one electoral district.

In the remaining 28 states . . . the state legislatures have the authority to determine electoral districts.  And that opens the gate for gerrymandering -- the deliberate manipulation of political boundaries for electoral advantage.

Partisan domination of state legislatures and improved technology to design contiguous districts that pack opponents into as few districts as possible have led to district maps which are skewed towards one party. Consequently, many states including Florida, Georgia, Maryland, Michigan, Pennsylvania and Texas have succeeded in reducing or effectively eliminating competition for most House seats in those states.

Here in Michigan, where we have a huge gerrymandering problem, there is an active campaign to bring fairness, impartiality, and transparency back to the electoral districting process.  I've signed up to attend a "virtual town hall" meeting tomorrow night sponsored by Voters Not Politicians.  Their goal is to bring the power back to the people of Michigan through a citizen led ballot initiative. With the help of other grassroots organizations, Voters Not Politician's vision is to establish an Independent Citizen Redistricting Commission through a state constitutional amendment.

I'm going to learn what I can do to help.

And - if you happen to live in Michigan and want to join the town hall tomorrow night (Wednesday, March 22), here's more information on how to sign up.  (And if you can't make it tomorrow night, check the schedule here -- because there are going to be more events - both virtual and IRL.)

Take action!  Do Something!
Learn about the electoral districting process in your state -- and if you don't like what you learn, get involved in redistricting reform!
(Power to the people.)

Here are some great articles on redistricting and gerrymandering to wet your appetite:

Bravo to you! We have the same gerrymandering issue here in PA - and Fair Redistricting is the most popular meetings to go to, outside Tuesday's with Toomey or Monday's with Murphy (who probably wishes that Fair Redistricting and those damned Monday people would just go away!) We have a person speaking to us at our huddle meeting on Saturday for the gerrymandering issue.

I went to a League of Women Voters meeting the last time NJ redistricted in 2010-11, and learned that even though we have a bipartisan commission for drawing lines, party politics still loom large. In the public hearings, two congressmen testified that the districts should preserve incumbents (them). One of them is the unwilling-to-listen guy I'm stuck with, but I have hope he'll be ousted in 2018. My action will be to campaign for almost anyone who is running against him. I found this interesting: http://www.chronicle.com/article/Meet-the-Math-Professor/239260/

Your passion is inspiring. I have been aware of the gerrymandering problem created after the 2010 census. Now is the time to create a nonpartisan approach for the redistricting after the 2020 census! You go girl!!!!

We lost our district due to gerrymandering in 2003 when I was living in NY State. We lost our long serving congressman & very popular congressman, Ben Gilman. He had served as our congressman since 1973, was chair of the foreign affairs committee, and served our district well The issue was that he was what we called a "Rockefeller Republican" or a liberal republican and was not conservative enough for the republican party at that time (now, he would be called a far left liberal!). Although our district was one of the fastest growing in NY State, it was eliminated and he lost his seat in congress. We had absolutely no say in the the process, it was done without our consent, and it hurt our district in many ways. My experience is that gerrymandering takes power away from the people.

This is all making me crazy too! Thanks for the links - they are excellent.

I'll admit that this is over my head but I will read those articles and see if I can't gain some understanding of gerrymandering. Massachusetts is pretty liberal (except for where I live) and I feel well represented by Warren and Markey.

For many years our Congressional Representative was a Democrat, a conservative Democrat, but that counted as a "D"! Then, THEY (fuckers) changed the districts for both state and the national elections. At least I live in an area that has a "D" for the state representative, but I believe the national representation will not change in my lifetime. Fight, fight, fight, even if it feels like you're losing.

I didn't really understand until you explained. I'm in Michigan, too, just north of Ann Arbor. I plan to read these links and look forward to your blog on the virtual meeting. Trying to get more involved, besides pussy hats and postcards.Thanks so much for keeping me informed

The gerrymandering in Wisconsin in 2011 was so bad that a federal court ruled in November 2016 -- after a lawsuit joined by the League of Women Voters -- that the districts had to be redrawn more impartially. Of course, our Republican governor and his gerrymandered Republican legislature are spending more $$$ to appeal that decision "all the way to the Supreme Court if necessary." In my opinion, the two biggest issues facing this country are overturning Citizens United (to get corporate $$ out of [legitimate] politics) and gerrymandering (to restore one person, one vote). If we don't fix those two things, everything else goes down the tube -- health care, women's right to choose, civil rights, LGBTQ rights, etc., etc, etc.

great topic, Kym - and I love the comments, too. Georgia's districts are certainly a mess - I hope we can learn from states like Michigan!

Power corrupts and Oh! are we ever seeing the evidence of that statement in our state and national so-called "governing bodies," assisted for sure by big money! It's obscene, to say the least, made possible by the general electorate's total ignorance of how the government is supposed to work and doesn't because civics is no longer taught and certainly not practiced. I'm on a soapbox...'cuse me... we here in Washington DC are totally disenfranchised: we pay taxes and yet have not a single vote in Congress!
Thx for sharing and doing something to turn things around in MI...
Cheers~

Fascinated by this blog entry on gerrymandering. It is now Sat., and just this morning - on CNN's Smerconish show - the author of "Rat F**cked: the true Story of the Attempt to Steal America's Democracy" was interviewed. The book is totally about the redistricting that took place after the 2010 census that was manipulated/gerrymandered to favor Republicans!! If you have an On Demand component to your cable service, you may be able to catch the interview. The book is currently out of stock on Amazon; I think I'm going to try to get it from the library. Like Carole, I live in MA, and am happy with my representatives.