It's Friday, and there are a few loose ends I need to tie up.  Let's roll. 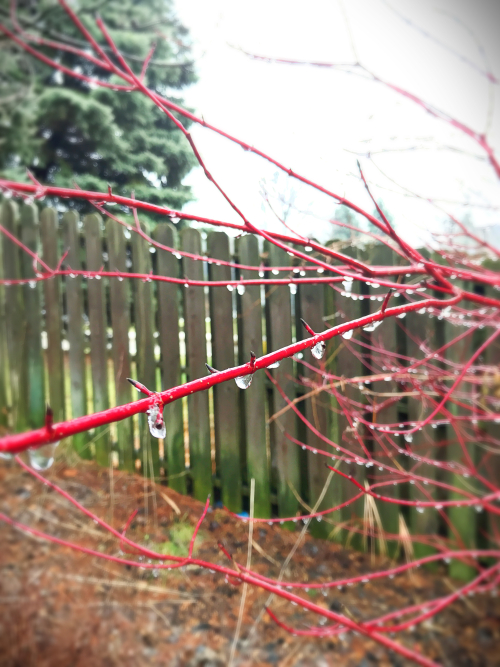 The weather.  Ugh.  So tedious.  First, there's snow.  Then there's polar vortex.  Then a freakish warm up.  With lots of wind.  And rain.  Which melts all the snow and then . . . freezes. 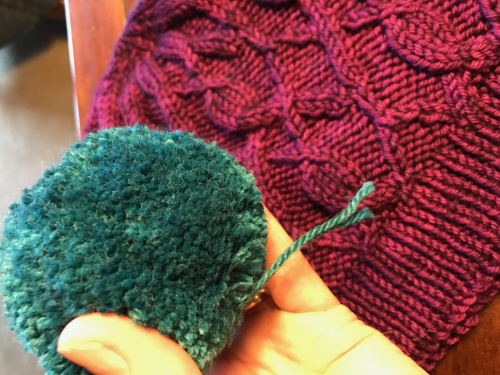 I wore my hat - With Pom - the other day.  Just out running errands, getting gas, that kind of thing.  The pom-pom drove me nuts.  I could feel it back there, bobbing around.  It had to go.  (Yeah, it was a nice color combination, but it really bugged me.)  I like the hat much better Without Pom.

In other news, Linda from Grand Rapids was the lucky winner of my extra copy of Making magazine.  I finally got it shipped off to her yesterday.  (I'm notorious for preparing a package for mailing, and then driving it around in my car for days before I actually get to the post office.) 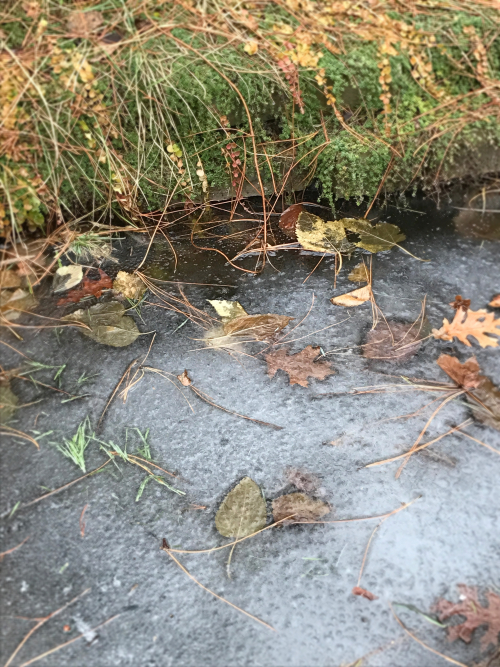 Good thing I have amaryllis (in various stages) to help me through these dark days.

My grocery-store-rescue amaryllis is on the last legs of it's second set of blooms.  I'll spare you that view (because we're way past the exit at this point), and share this one instead. This one is pretty cool.  It's called Tres Chic (from White Flower Farm).  (Now that it's blooming, I can identify it.)  The blooms are much smaller than typical amaryllis -- but look closely at the center of the photo.  There are going to be SIX blooms on this stalk, rather than the typical four.  I can't wait to see all six blooms at once.  Or. . .  let's just say I HOPE I get to see all six blooms at once.  This one is making me a bit nervous -- because the bulb is actually rotting.  (Yeah.  It's pretty gross.)  This is a risk of planting the bulb in stones with water.  I'm keeping my fingers crossed . . . that the blooming happens before the bulb gives out.

This next one, though, is looking good.  The bulb is healthy and the first bud should be popping open any day now. 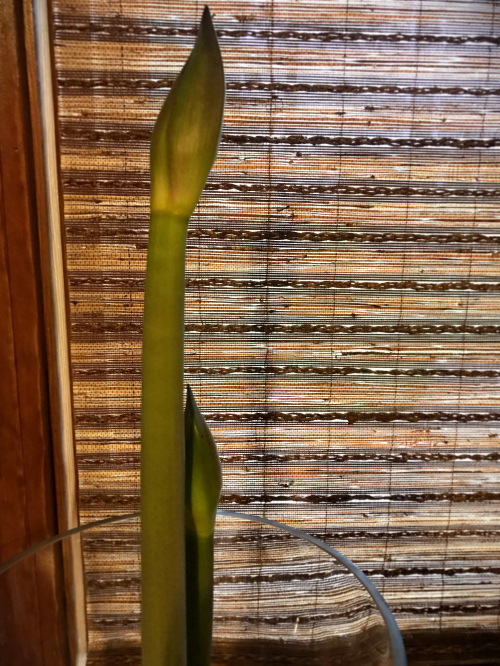 This one?  Almost in the same state.  Maybe next week? 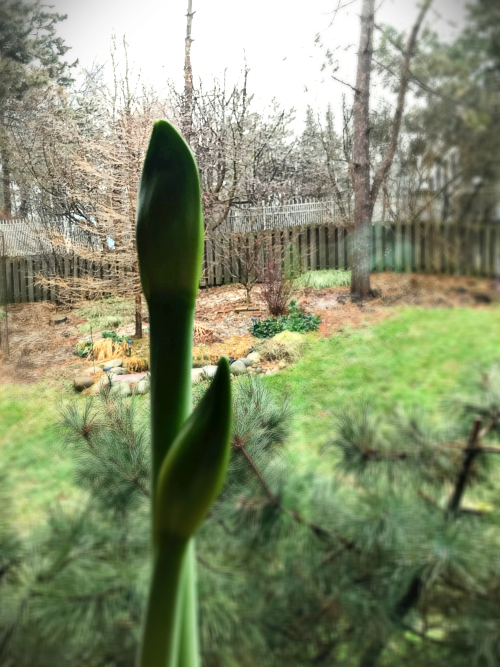 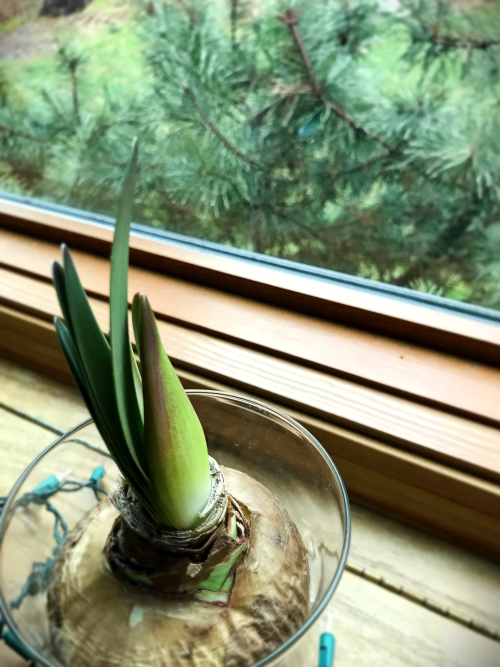 The bud finally emerged, but it's really taking it's sweet time making progress.  That's just fine with me, though.  Because it means I'll have blooms all the way into February!

Have a great weekend.

Amaryllis watch is such fun! White flower farm is so close to where my sister lives in my little state, but honestly I've never been there. I have ordered spring bulbs from them. I'm actually thankful for the snow melt this week. Hubby is in a cast and on crutches so loosing the icy driveway has been a good thing. Stay tuned temps are dropping!

How great that your amaryllis are all in different stages so that you can enjoy blooms for a good long while. The first two blooms on mine are gone by now but I've still got 2 flowers on that first stalk plus two fully opened on the second stock and 3 more coming on that one. It's been so nice to enjoy that gorgeous plant!

What a great distraction from the yuck that is outdoors right now. My backyard is one large mud bog - snow to rain to 70 degrees with more rain - yeah, it is so lovely.

Here is to a lovely weekend - with lots of hygge!

Since I voted "lose the pompon". I was happy to see it go lol. And equally happy to enjoy your beautiful amaryllis -- a splash of red is perfect for offsetting the sometimes drab winterscape. Happy weekending!

Those blooms are great! I've got one with three full blooms right now - looks like a loud speaker system and one shoot that I hope will bloom. It's been so fun watching it I'm going to scour the grocery store tonight to see if there are any left! And the weather...insert eye roll. Just snow already and give us some winter fun. Have a great weekend! xo

It's like you planned the blooms to happen so you would have color as long as they skies are gray. I hope your bulb holds out, too. Tres Chic is quite a lovely (and spectacular) little flowerer!

Oh, is that ever gorgeous!! You're giving me hope for my slacker... and I don't really mind its slowness, either, because who can argue with blooming flowers no matter when??

I WANT AN AMARYLLIS! (Sorry for the shouting.) Next year...

Red twig dogwood in the first photo? There are not many of those around here, but the yellow of willow branches cheers me every time I see them against the snow. I will take color in January anywhere I find it.

May those beautiful blooms win in the race against rot! I've got one amaryllis that has been ready to bloom for what feels like weeks and two that may not bloom at all, but I did just notice pink blossoms on the begonia I'm trying to keep alive over the winter! And hooray for your Pom-less hat!

Thank you for all those wonderful amaryllis photos - there are still so many blooms to happen! (and I'm glad you un-pommed :-)