During the cold months, Tom curls. 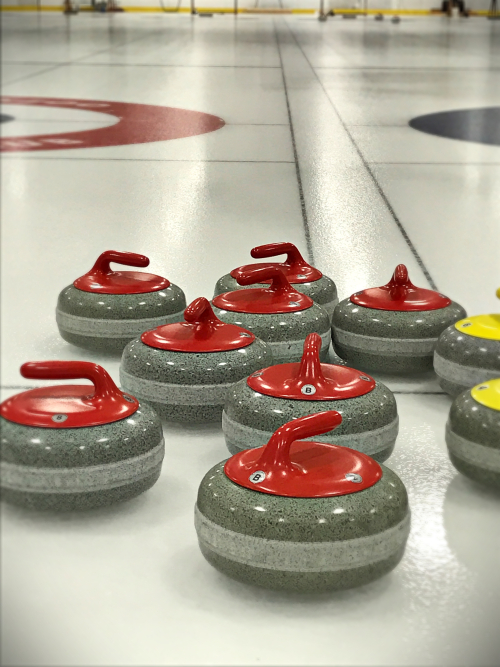 He plays in a couple of leagues each week, and travels to bonspiels with his curling buddies.

I have never had any desire to curl -- despite encouragement from Tom and the other members (many of whom are couples) of the curling club.  There is no real reason why I wouldn't want to at least try it.  Except that it's never appealed to me.  And I have plenty of other things I already like to do.  And it's cold.

But a group of our friends decided they would like to try it.  And Tom offered to organize an outing.  And . . . I finally tried it.  On Monday, I went through . . . the curling entrance . . . 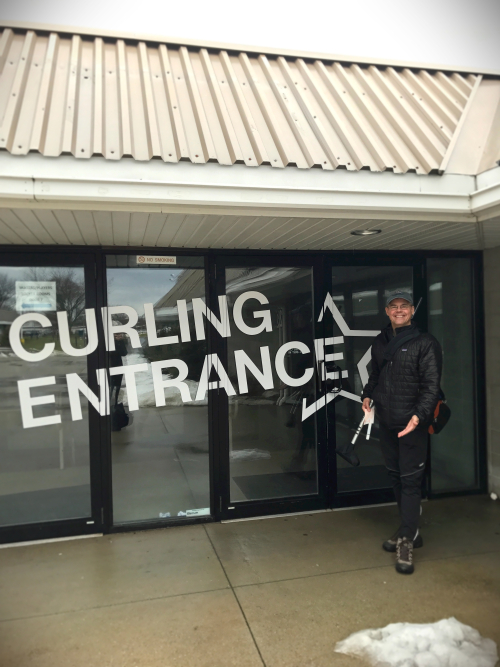 and went right out on the ice. Curling is a game of finesse and technique -- and WAY harder than they make it look on TV.  It's also a bit scary.  Because ice.  But it's the kind of thing that - with a bit of solid instruction - you can actually DO (even if badly) right away. 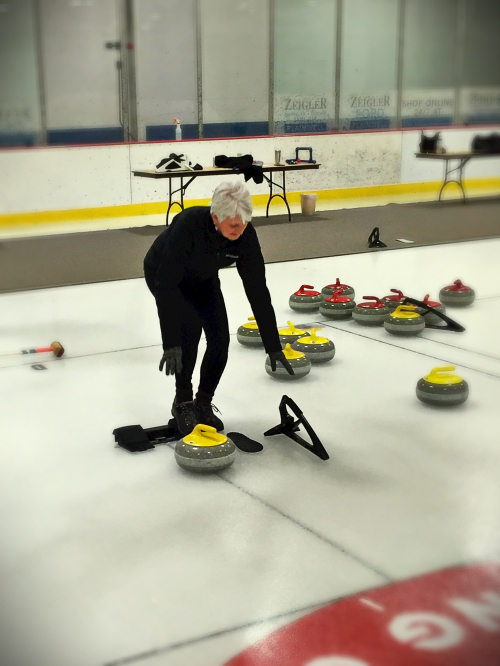 And the first time Tom told me to RUN down the ice to sweep one of my teammate's rocks, I was like . . . are you freaking kidding me?????

But.  I got there!  It was challenging -- and a whole lot more fun that I imagined. 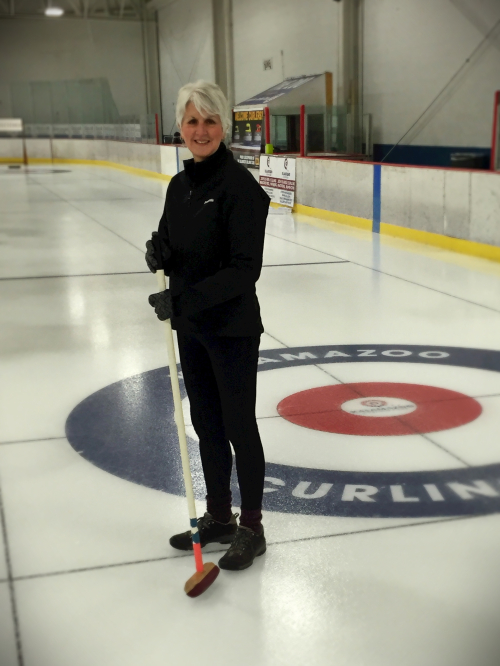 The best thing about curling, though, is that it's a really social game.  We all had a great time -- lots of laughing and banter.  And after the game?  Well . . . then there's something called "broom-stacking."  (According to the Glossary of Curling, this is "slang for socializing with teammates and opponents, often over a drink, after a game.")  We went out for beer and pizza! 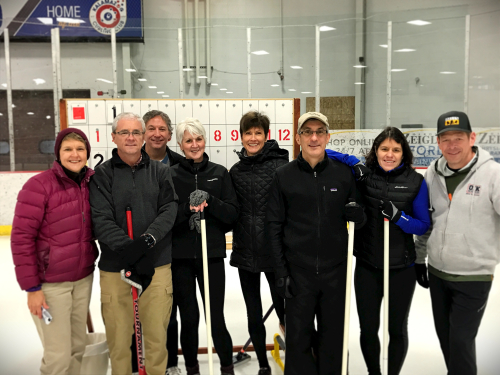 Will I try it again?

Sure!  (Although the weekly league thing sounds like way too much commitment for me. . . so don't count on any regular curling posts here.)

And, the four people to the left side of the photo above?  WE WON!  (Just sayin.)

Well done! It is good to try new things - I need to remember that!

This is SO cool! I love that you tried it, advanced to running on ice, and especially that you had such a wonderful instructor. Just learning the lingo looks a bit daunting, let alone the whole throwing rocks on ice. I think I'd like to try it, just because it's so unique, but I'd probably only be good at the broom-stacking part.

Oh, how fun!! I'm so glad that you tried it -- and liked it, and WON!! I've always regretted that I never saw my grandpa curl... there was (still is) a curling club just around the corner and down the block from where they lived.

I admire you for giving it a chance. Do not think I would have - cold and ice do not thrill me!
However, I was watching the curling during the Olympics one year - and I actually enjoyed watching it! and it does look hard! much harder than people would think!

Being with 8 competitive and fun people would certainly make the challenge worth trying. It sounds like fun and looks like fun, too!

I'm with you on the cold. BUT it does look like a great evening out with friends. And that makes it look somewhat appealing! Here's to broom-stacking!

Sign me up....for the broom stacking portion of the event! LOL

But, in all seriousness - GO YOU!! On ice and throwing rocks and WINNING!!

Good for you for giving it a shot - I bet it made Tom really happy. And of course you won!

I like the beer and pizza part! You were a great sport to try it.

yay you! I've always known there must be something compelling about curling because so many people are passionate about it - and I'm sure not just for the beer and pizza afterwards :-) (were you sore in weird places the next day? I'm sure I would've been!)

See? Your Alberta heritage is coming through! Your Mom would be so proud of you!! It is a FUN game and as long as you stay upright, it is incredibly relaxing....enjoy .....

My hubby curls too! I knit, he curls. I have tried it- I am terrible. The broom stacking is I think the big appeal... as are the bonspiels. I will say- his club has a cozy warm room to watch for the nights he wants to go out after curling with me- I stay warm and knit, he curls. Win win :)