Twenty-five years ago, Tom and my Dad built a little deck on our house (which was interrupted by an emergency bathroom re-do . . . but that's a story for another day) -- just in time to celebrate Erin's 2nd birthday with an outdoor party on the deck.

That patio set has seen us through twenty-five summers -- a couple of decks, a patio, countless meals, happy gatherings, and many, many replacement umbrellas (including the one that caught fire a couple of years ago).

Every spring, we drag it out.

Every spring, I cringe at it's deteriorating condition.

But, hey!  Functional.  (Although more faded and shabby each year.)

This year, I suggested painting it.  Tom jumped at the idea.  (Because you know.  Let's make it last another 25 years.) 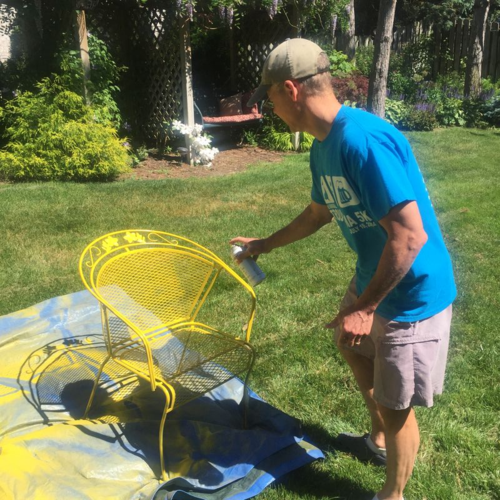 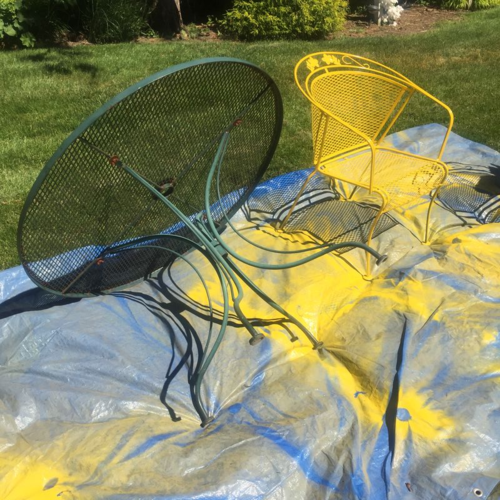 *Today, we also have a 27-year-old daughter!  Happy birthday, Erin! 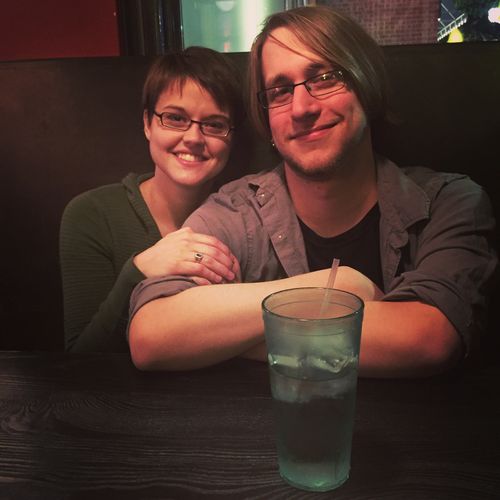 (Also . . . See those shorts that Tom is wearing in the photo up there?  Yeah.  Those are the shorts I was talking about in my post on Monday.  I think the shorts are at least 20 years old.  No duct tape yet -- but maybe soon.)

I love the refresh! How awesome and that color! YES! It is so summer! And, maybe no duct tape, but some visible mending ala Vicki! You can shibori those babies right up! XO

Those shorts look brand new, as does your nice, bright patio set! I hope Erin has a very Happy Birthday and a wonderful year ahead on her next trip around the sun!

That color is wonderful! And I think Doug and Tom have some common "threads". :-)

I love that bright yellow! And Happy Birthday to Erin!

The bright yellow is fabulous!! Smith's shorts could give Tom's a run for their money. Happy Birthday, Erin! May it be most excellent!

I feel you, girl! My sweetie has finally agreed to a new bed. Ours is coming apart after 36 plus years! Happy birthday to Erin--27 is a great age to be!

Great color choice! You realize that the set costs about $3 per year!

Your husband and mine have VERY similar ideas about making things last. I have had to mark some of his pants so he knows which ones cannot be worn beyond our property lines!

Mazal to to Erin and her mother and father too!

The shorts look really comfy and the yellow set is brilliant!

Color does it all! Our amazingly similar set -- only difference is ours is black instead of green -- has lasted roughly 20 years. When Smokey brought it home, the first thing he did, even before putting it on the deck, was to spray the whole thing with another coat of black Rustoleum. Sometime in the next few years, however, he will have to sandblast the whole set and respray.

I LOVE that color - yay for reFRESHed and yay for 27 years of mama-hood!

(#visiblemending is a THING... wherein Tom's shorts have plenty of life in them.) (See Sashiko, Boro.)