Rambling in the Face of It

I'm sure many of you are aware that Kalamazoo is the latest (in a way too long line-up*) of cities-in-the-news because Senseless Gun Violence.

Today, as I write this post . . . well.  Let's just say I'm rambling, and not really sure where it's going to go.  Because This Is My Town, Damnit.  And I'm still processing.

But I'm going to start here.  With a BB. 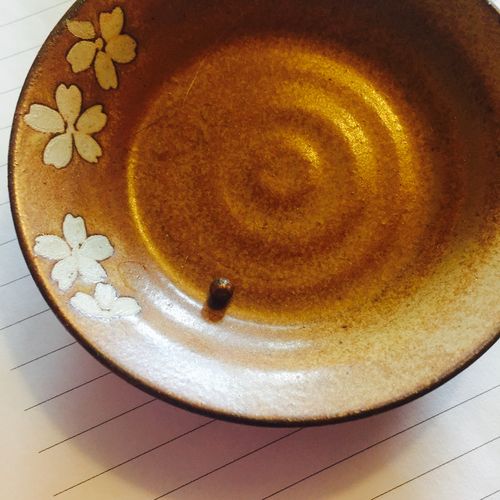 One day last spring, I was out walking my dogs -- and I got shot in the leg with a BB.  (That very BB.  I saved it.)  It hurt like hell.  But, mostly, I was shocked.  It could have been just kids playing around, an errant BB ricocheting off a tree.  But I couldn't quite get over the feeling of . . . being shot AT.  Like . . . on purpose.  Someone with pretty good aim . . . considered me (or maybe my dogs) a target.  I limped home that day, and called the police.  They were nice -- but it was already too late for them to do anything.  (And apparently they don't run ballistics on BB pellets.)

I was really angy about my BB incident.  I mean . . . I was just out walking.  In my neighborhood.  Where I feel safe.  And where I should never be shot at.

Because, you see, the Social Contract is in place.  Organized society depends on - and is invested with - the right to secure mutual protection and welfare.  In other words, I can walk the streets . . . and you won't shoot me.

I'm not trying to compare the my own silly little BB incident to the carnage here in my city on Saturday night.  Not even close.  But I am saying that random shootings - like we've had FAR TOO MANY OF - are a disruption of the Social Contract.

People should be able to load their children into the van . . .

WITHOUT FEAR OF BEING SHOT AT!!!

Because these are NORMAL, every day activities.

Things we all do.

And we should be able to do them . . . without thought.  Without pause.  Without fear.

Because that's the Social Contract.

(I so thank all of you who contacted me via text, email, and Facebook yesterday.  It meant so much.  XO.)

*  According to the Washington Post, the Kalamazoo shootings on Saturday night represented the 42nd "mass shooting" this year.  It's only February, folks.  That means . . . mass shootings have happened in the US in 2016 (so far) at pretty close to . . . well . . . once per day.  This. Is. Appalling.

You expressed so well the horror of that Social Contract violation. The BB incident is horrific because it produces all sorts of "what ifs" and that is SO unsettling. My heart hurts for you, for your peace of mind, for your community.

I am so sorry this happened in your community and even as I type that I know it could be my community or Margene's or Bonnie's or any one of our towns. You are completely spot on with your post and it's exactly what I say when people start sounding off about their 2nd amendment rights - someone's right to bear arms does NOT trump my right to go to the movies and not be worried about getting shot. Lots of love to you today and every day.

I felt sick to my stomach when I saw this news. I am heartbroken for these families who will now have empty seats in their families. I do not understand why anyone can think that a gun is the answer to anything. It is beyond my comprehension. And, I agree with Carole - there is a reason the 1st Amendment is first...

I am mourning with you and your community and I send you my love.

I thought of you as soon as I heard the news and am glad you chose to write about this today. I agree completely with Carole; it could have been any of our communities, and given the horrendous frequency of shootings, it will happen many more times. To be honest, if we didn't change gun laws and access to guns after the Sandy Hook shooting, I'm not sure if we ever will. I wish I knew what to do besides cry. Stay safe, my friend.

I'm so sorry that this happened in your town and realize it could happen anywhere. What saddens & sickens me is that people feel their right to bear arms is of more value than individual human lives-and some of these same people claim to be "pro-life"! Wishing you & your community well.

My apologies for not reaching out--I was sick yesterday and did not watch television or read the newspaper. Your post was the first time hearing about the shootings in Kalamazoo. Your analysis was so compelling and well-written. Sometimes it feels like the United States is regressing to the days of the Wild West--so many have the opinion that we must have our own guns to be safe. I live relatively close to the Aurora theater and the initial reaction is to be traumatized, but I am making a choice not to be fearful. I'm with you on the dismay and anger at these senseless acts.

I thought of you when I saw that in the news. How awful. And for you to have been shot by a BB! Yikes.

Appalling is absolutely correct. I keep thinking there are still safe places to live. I'm not so sure any more. Something has to change very, very soon. xo

I, too, immediately thought of you when I heard this horrifying news. Others above have put it far more eloquently, but I share the view that we have too many guns and too much gun violence. We need to make our voices louder than the pro-gun lobby.

Utterly absurd and appalling... and it's sickening that one of my first involuntary thoughts was "where next?" It has already happened in my community (not exactly where I now live, but close by and where I went to 2nd grade)... and "will it happen again?" I'm sorry it's happened to you.

I read about this today in my Washington Post. I hadn't heard anything about it before. It just sickened me - and scared me. I'm already afraid to go so many places these days - and now this just freaks me out even more! And then you - taking an innocent walk - with your doggie - and getting hit with a BB gun!

I live near D.C. and when we had the sniper shootings going on - it was the scariest thing I've ever gone through in my life. I was so afraid to walk across a parking lot - come out of work - pump gas. All normal things we do every day. It took a long time to get over that. And even now - there are times when it still goes through my mind!! I keep going out and about... and trying to be normal. But it is getting harder and harder to do that every day.

Oh Kym - I didn't hear about the shooting until today. yeah, not doing so great with my "more current events" resolution... and I'm sorry I wasn't there to offer support. prayers, encouragement, simply being a warm body who cares. Please know that I am offering all those today. xo - M.

I am glad you are physically well, but I can empathize with your mental distress. The fact that we as a people can come to no agreement on a solution is unsurprising given the current climate, but it is overwhelmingly disappointing and sad.