Stepping Away from the Edge
Home Archives Profile Subscribe
Throwback: A Tale of Two Afghans
Squirrel-Proof

Okay.  So, technically, I live in Portage, Michigan.  (That's where I pay taxes.  And my kids attended the Most Excellent Portage schools.)  But I'm only two blocks from the Portage/Kalamazoo border, and I've always more closely identified with Kalamazoo.  So I consider my community . . . Kalamazoo.

1 - Home of Bell's Brewery and The Eccentric Cafe.  (Need I say more?) - And, really, that's just the tip of the iceberg.  There are many top-quality breweries in town.  Enough that Kalamazoo has it's own Beer Week in January every year.

2 - Kalamazoo is a college town, with both a major public school - Western Michigan University, and a highly-regarded private, liberal arts college - Kalamazoo College (or "K" as it's known locally) in the city.

3 - Kalamazoo has an interesting past . . . as the home of both Checker Cab and Gibson guitar.  (Although both companies are gone now, their legacies still show up in unique and interesting ways throughout the city.) 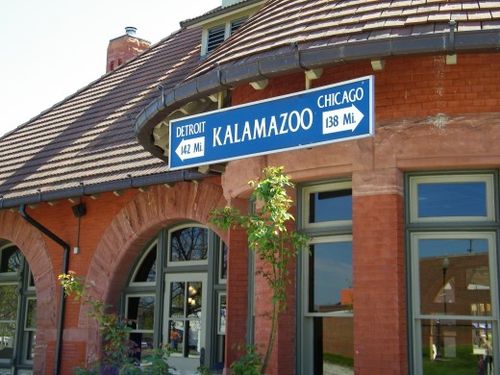 5 - There are several Frank Lloyd Wright houses in Kalamazoo.  (Two separate neighborhoods.  One is quite close to mine - we've been to a party in one of those homes.  The other is a bit out of town, but still in the area.)

6 - The 90s band The Verve Pipe is from Kalamazoo.  (Even though the video clip I'm using says "from East Lansing."  It was really Kalamazoo.  They just went to school in East Lansing.)  Someone else you may recognize - Derek Jeter - is also from Kalamazoo.  He played baseball at Kalamazoo Central High School, and still does a lot of charitable work with kids in the community.

7 - Kalamazoo is a relatively small town (4th largest city in Michigan) -- but we sure have a lot of top-notch arts and cultural organizations and opportunities.  (Theatre, music, visual arts.)  It's also a sort of literary hotspot -- many writers live and write here, including Jaimy Gordon, who won the National Book Award in 2010 for her novel Lord of Misrule.

8 -- Kalamazoo is also very science-based.  Formerly the home of Upjohn Pharmaceuticals (all but gutted now, thanks to layers of mergers and eventual decimation by Pfizer) (sorry;  just gonna say it), the community still values science and science education.  (Really -- there might be more scary smart science nerds here, per capita, than anywhere else in the world.) 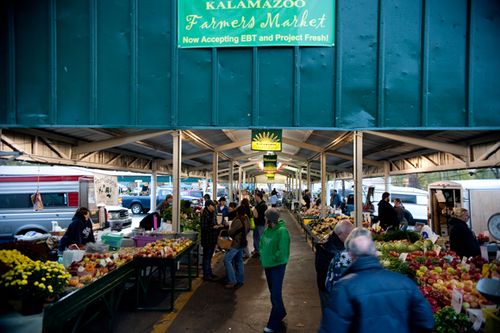 9 - Kalamazoo has an INCREDIBLE farmer's market.  The community has totally embraced the farm-to-table concept, and supports "locavore" restaurants, grocery stores, a year-round food co-op, and this amazing farmer's market.  (The photo above only shows about a quarter of the market.)

10 - And . . . we've got peregrine falcons!  Tom's office window faces the building where the falcons hang out.  He can watch them fly!  (And once, he watched himself turn on the light in his office on the "falcon cam.")

I love living in Kalamazoo -- it's a pretty cool place.  What do YOU like about your community?

Join the fun and read all the other Ten on Tuesday posts here.

Posted at 07:38 AM in Food and Drink, Michigan, Soundtrack of My Life, Ten on Tuesdays | Permalink | Comments (14)

I LOVE Kalamazoo! I grew up in Michigan and visited your fair city a good number of times. I love that our lists share Frank Lloyd Wright Houses and farmer's markets!

Also, Bell's - yes, I love it! And, have been enjoying it long enough to remember when Oberon was Solsun! Hahahaha!

I remember reading somewhere once that Kalamazoo was the Celery Capital of the World ... is that true?

Bridget - Kalamazoo was once known as Celery City, and quite famous for the stuff. (You can read more about it here, if you're interested: http://www.kpl.gov/local-history/business/celery.aspx) But now . . . not so much.

We are woefully deficient in good beer and breweries here, so along with Bell's, falcons, and all the other great things you listed, you've made Kalamazoo sound quite enticing! A friend attended Eccentric Day a few years ago and still raves about the costumes, food, and beer.

I had a dear family friend who lived on a tiny lake in Portage. I miss him. Beautiful part of the world.

The ability to travel easily to two major cities is definitely a quality that Denver lacks. Your list was great fun to read.

Very envious of all the good stuff. I was just thinking I'd sell my soul for a little neighborhood restaurant with good fresh food that we could frequent on a Wednesday! A brewery...well that would be amazing!

It also has a really cool name.

I can't wait to visit, especially all those breweries! And shouldn't you have mentioned the Black Keys song? It's one of my favorites and always makes me think of you.

One of my best friends moved to Kalamazoo (actually Portage!) a few years ago and has been extolling its virtues ever since. I have to come visit!!

You town sounds wonderful and I'm very envious of the Farmers Market! We have Peregrines, too and I hope they nest in the downtown box with the camera.

Kalamazoo is just the right sie -- not too big and not too small. It's a great place!