I knew, as soon as I learned this week's Ten on Tuesday topic, that if Tom got hold of it, I would never get a word in edgewise!

Why fight the rising tide?  This week's Ten on Tuesday list is brought to you by the creative mind of Tom. 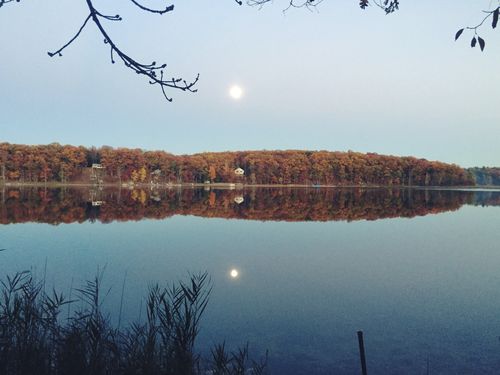 (The photography today is Tom's, too.  A parting shot of our lake, taken when he went up to close the cabin for the winter last weekend.)

This week, Carole takes us back to the very roots of NaMoBloPo -- getting people to write -- by asking us to come up with Ten Sentences That Would Make Great Opening Lines in a Novel.  Tom loves to play with words.  He tends to be very clever and loves to write descriptive paragraphs, altered song lyrics, and limericks.  (He's not the Poet Laureate of the Kalamazoo Curling Club for nothing.)  This is a topic made for Tom -- and he had a lot of fun with it!  His list:

How about YOU?  Do you have a great opening line for a novel?

Join the fun!  Sign up for Ten on Tuesday here, or see who else is playing along here.

Bravo, Tom! While I'm not much of a writer myself, I greatly appreciate the right word in the right place, and those that have the skill, patience, and vocabulary to craft them. I especially love #2; it reminds me of Douglas Adams and perfectly describes several "pea and carrot" situations I've been part of.

Those are fantastic! I especially like the constipation one. Tom missed his calling, I'm thinking. Are you sure he's really an engineer?

Tom needs to continue writing book #3 as it could be the greatest crime novel ever! He obviously has a talent, maybe he should pursue a new career.

And who wouldn't like to know more about Uncle Ted? Great job Tom!

I really think Tom needs to write at least a novel. What creativity!

Wow!! I agree, Tom should write a novel!
Me, I don't have a creative writing bone in my body, but man, he certainly does!

These are great. I think I heard the same speech that the narrator of the water boarding narrator reported!

I see a new career coming for your husband! Like so many others who left their professional careers to become successful authors, I think Tom should give it a go!

I would read these!

I think Tom's found his (next?) calling! these are awesome... and fun. and yay for team play this month!

Add my vote for #3 as well! Number 1 has me wondering what comes next. Tom you have an amazing imagination! (Hear the chant of the crowd...book, book, book, ...)

What a great post! I think Tom needs to take each of those opening lines and work them into a novel or a book of short stories.