Stepping Away from the Edge
Home Archives Profile Subscribe
So. The Not Knitting.
Bloomin' Friday

It all started last May . . . with a little brownish spot on the kitchen ceiling.

Turns out . . . the shower in our bathroom was leaking.

I called a plumber.  He tried the obvious quick fixes.  But the brownish spot got bigger, and actual drips of water made their way onto our kitchen floor (and into one of our kitchen ceiling light fixtures).  Time for Plan B.  And that's when they started talking about needing to "demo" the shower.  It took me a few minutes to realize they meant "demo" as in demolition.  Like . . . the shower needed to GO.  (Apparently the floor of the shower unit had developed tiny hairline cracks that, over time, leaked.)

And that, my friends, began my "mouse a cookie" project!

Because if you're going to "demo" the shower anyway, why not put in a bigger shower.

With new and more groovy fixtures? And . . . maybe replace the wobbly toilet while you're at it?

And, well . . . let's replace ALL the fixtures in the bathroom.  Because that brass is WAY out of date, and tarnishing terribly besides.

WHAT?  You need to lift out the jacuzzi tub completely to change out the fixtures?  A tub we don't even USE.  (Seriously.  Just a dust-collector.)  WHY NOT TAKE OUT THE TUB?  We could create a little "fitness corner" there!  A place the yoga mat could live; a place for meditation; a home for the foam roller and Tom's kettle bells.

Which means . . . new flooring.   And, hey!  I've been wanting to replace the horrid blue carpet in the bathroom and our bedroom ever since we moved in. 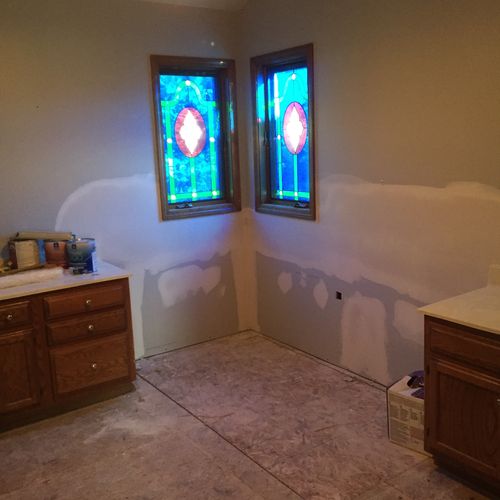 And we'd need fresh PAINT . . . but first, we have to remove that hideous, striped wallpaper that I've also hated ever since we moved in.

And . . . so it goes.  Although we did draw the line at replacing the countertops (sort of regretting that right now, but I'll get over it) and I'm sticking with my old furniture.

It's been a long haul since I first disovered that little brownish spot on my kitchen ceiling, and we're still quite a way from The Finish.  (Let's just say . . . the dry-waller and I are becoming good pals this week.) But the whole thing is pretty exciting.

(Just don't give me another cookie.)  (Because that brownish spot on the ceiling?  Yeah.  It's getting me thinking about the whole kitchen.)

It's a slippery slope, that home renovation business. Your new bathroom space sounds amazing. And I'm thinking it's kind of good timing - the fact that you have no master bathroom right now will make my paltry accommodations seem much more . . . accommodating!

Cannot wait for the reveal - especially that "fitness corner"...what a great idea in place of the dust catching tub! (and good luck with the kitchen "cookie")

As long as you kept those awesome stained glass windows! I hope the dry-waller is good company; I've had some of the best conversations ever with my furnace guy.

What Carole said! :-) And I cannot wait to see that fitness corner as well!

With the kitchen you better plan well! We are in the process of considering a bath/kitchen renovations and the kitchen options/costs are quite frightening.

Oooh very exciting! That striped wallpaper was only slightly better looking than my "clown barf" bedroom paint. Glad to see both of them going. And those stain glass windows will be perfect for a meditation corner! Can't wait to see it when I come visit at thanksgiving!

You are going to be so grateful for that brown spot because your new bed and bath (and probably the kitchen) are gong to be fabulous!!

The gorgeous windows! Have they always been there, or are they part of The New Look? Whatever, I love 'em!

Ha. Our upstairs bathroom remodel/addition was also because of a leak that we couldn't fix. It was a royal pain to do, but we love the result! I'm sure you will too. Sometimes, leaks aren't such a bad thing...

Oh yeah, I've had many of these cookies in the past 30 years!! You will love it, though, and there are ALWAYS regrets... what you put it, what you didn't take out, always something. (Mine is the whirlpool tub we put in when a regular old tub was all we needed; once upon a time people took baths in this house, but no more!)

Ooooh boy. Renovations are SO disruptive. But YAY for a new bathroom! I'll look forward to the "after" picture.

Serendipitous brown spot eh? A great pay off in the end. :-) Can't wait to see the after photos!