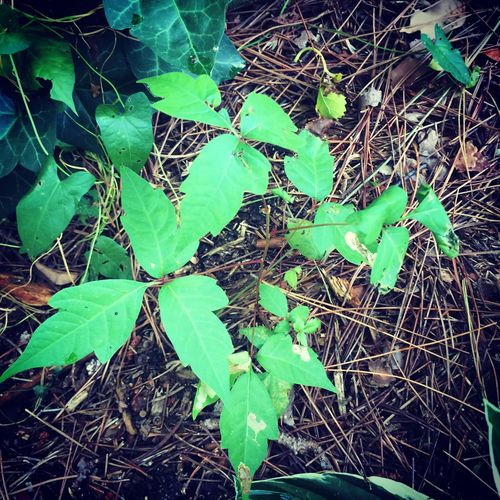 Most of you probably are familiar with this garden scourge . . . but some of you might not be.  This, my friends, is poison ivy.*

Ugh. I hates the poison ivy.  And, unfortunately, I find it in my garden all the time.  I went on a fairly extensive "search and destroy" mission over the weekend - with good success.  (And by that, I mean no rash.)

Inspired by my gardening mission, and being a creature of habit, I decided to bring you my own** Ten on Tuesday today - Ten Facts/Stories About Poison Ivy:

My advice:  Keep a close eye out for those leaves of three.  (And don't go chasing soccer balls.)

* Although this post is focusing on poison ivy, there is another garden scourge in today's photo . . . bindweed.  Not poisonous.  But really awful all the same.  (Despite it's sweet little morning glory-like blooms.)

** Carole is off on vacation for the next couple of weeks, so no "official" Ten on Tuesday posts until September.

I had it every year of my life between 6 and 16 but not once again since. Dan and Doug have never had it. Fingers crossed! Thanks for the science lesson today Kym! :-)

My son had it last summer - retrieved soccer ball - and it was nasty.

Here is one more fun fact for you: we have Orange Spotted Jewelweed growing in the woods behind our house. It can be used as a natural remedy for poison ivy rash and the two plants often grow side by side. Almost as a warning.

This year we also have the fun of Wild Parsnip throughout the fields in our area. It' snot fun either.

Thanks for the Top Ten. I would have missed reading it this week.

Interesting! I've had it every year of my life, and can attest to the terrible truthfulness of #10. After minimal contact with smoke from a pile of burning poison ivy, I spent the next two weeks in the hospital on steroids when I was in 2nd grade. Fels-Naptha soap is good for removing urushiol from hands, shoes, and tools. Be careful out there!

We don't have a big poison ivy problem here, at least not in gardens, but there is some around in the canyons. I recently saw this article/video on preventing the rash - maybe you'd find it helpful: https://extremedeerhabitat.com/how-to-never-have-a-serious-poison-ivy-rash-again/

The Fels Naptha tip is one I learned in h.s., when we moved to northern MN and found that our yard was surrounded by poison ivy. Supposedly, Fels is the only soap that doesn't absorb some of the urushiol into the bar and spread it around on the bather's skin. My mom used to have to get out of the yard, either by digging, like you, or with carefully applied RoundUp.

I don't know why, but I have never observed poison ivy anywhere on our property or around our lake, even though I see it in the ditches not far away. ::knock on wood::

I am knocking on wood... so far, I've never seen it in my garden/yard! Here's to your continued good luck!!

Flying poison ivy-- yikes! It seems that if you live anywhere.near poison ivy, you're in trouble.

OK, here is the craziest Poison ivy story that I know to be true. A friend from Nantucket came to visit me in Feb and she had a nasty case of poison ivy on her rear end....from peeing outside on a log in the wintertime when she was ice skating w/ a group of friends!! Mary in Cincinnati

thank you for the PSA - that was very informative! I've never had poison ivy - one of the benefits of no garden :-) but my sister usually has it at least once a year. I'm glad to know it's not contagious...not that I'd choose to touch - it looks nasty!

I'm so very grateful to have never run into the nasty stuff. I've spotted it sitting off the trail waiting for the unwary but I've run the other way! Thanks for all the great info, as I'll be even more wary!