Stepping Away from the Edge
Home Archives Profile Subscribe
Lost in Art
We Have a BINGO!

Adopt the pace of nature; her secret is patience. 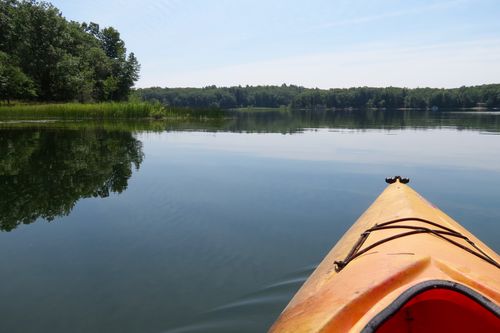 I love taking the kayak out on the lake -- especially when the lake is still and clear as glass.  It's great exercise, sure, but mostly . . . I just love the view you get from a kayak.  You're right there . . . on the water . . . close and part of it all.

I usually wrap my "good camera" in a beach towel and head out in search of turtles and loons and the lilies.  (I would never trust my phone out in the middle of the lake.) 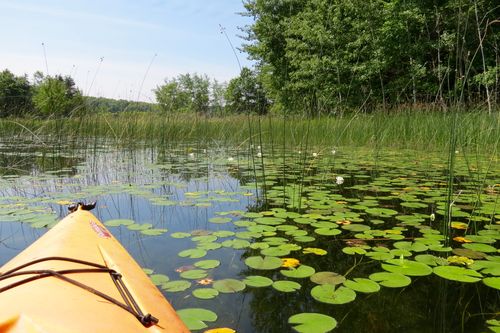 It's a real challenge to get a good photo of the water lilies from a drifting kayak -- even though it's not moving very fast.  (There are no brakes, y'know?) 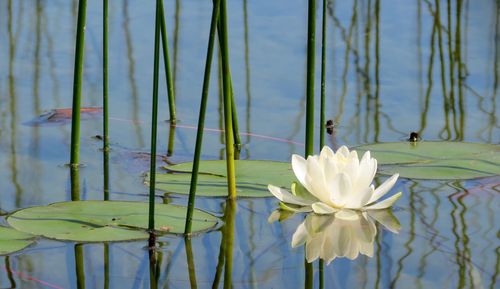 This is just a plain old white water lily - and plentiful all over our lake in the shallow bits, but I think they're particularly beautiful.

I love the way the reeds reflect and refract . . . and get all squiggly-looking in the water. 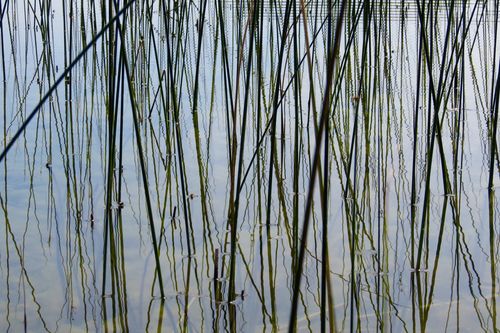 Our lake is joined by a channel to another lake, and on that lake - in the far corner - there is a huge patch of lilies, including the Spatterdock (or Yellow Pond Lily).  (I think Spatterdock is just more fun to say.)  They're really cool -- but they only bloom early in the morning.

Erin always called them Alien Plants.  She had the right idea!  They're very cool -- and very unusual.  It's always a treat when I'm up and out early enough to see them in bloom.  They close up and shrink down into the water again at about mid-day. 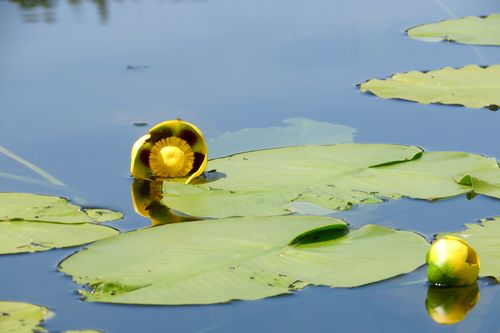 Sometimes I like to just drift along in the middle of the lake.  You never know who will pop up right next to you! 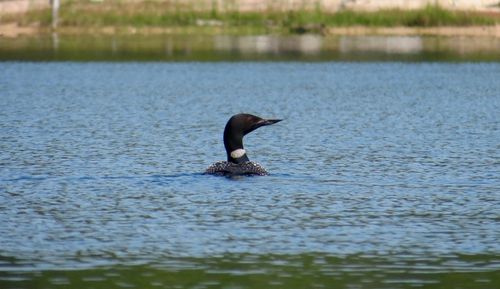 I usually see plenty of turtles, too, but it's just really a challenge to manage turtle photos.  They move quickly when they want to.  (Plus . . . moving kayak . . . and camera in a towel.) 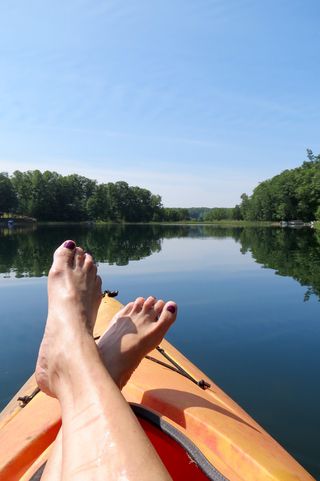 The view from a kayak is pretty awesome . . . and a great way to adopt the pace of nature.

Lovely! The Blue Pickerel were blooming like crazy when we went a week ago. It was so spectacular. But...I was camera free and not happy about it! That loon is so cool!

I always associate the waterlily with heaven (technically the lotus).
"In Buddhist symbolism the lotus is symbolic of purity of the body, speech, and mind as while rooted in the mud, its flowers blossom on long stalks as if floating above the muddy waters of attachment and desire. It is also symbolic of detachment as drops of water easily slide off its petals." :)
Beautiful pictures!

What a restful post! I feel like I just paddled around in your kayak with you. Beautiful photos of a beautiful spot.

Great pictures, and I agree completely. I haven't yet solved the riddle of picture taking in a kayak with a nice camera.

I was scrolling through this beautiful post and had the thought, "If she's about to show us a picture of a loon...." So jealous. Your pictures are stunning and what a fun way to get some outdoors time!

only YOU could write a post that would make me actually want to get into a kayak with my camera (and without my phone ;-) I think the waterlilies really sealed the deal.

Great photos and what a wonderful way to spend ones days, just floating along, watching nature, moving slowly, the beauty of the world at every turn, the sound of water, such a perfect way to live. Hope all that peace followed you back to daily life.

Ahhhh.... so peaceful and beautiful!!